Running of the Bulls

At the end of May as Spain’s IBEX was cascading below their 2009 lows – to 9 year lows, I contrasted the index to the SPX in March of 2009.
Sure enough, the fractal comparison proved to be a major pivot low, with the IBEX rallying some 20% in the span of one month.
What I find interesting today, is the explosive nature of the rally as expressed by its RSI readings that have bounced higher from the midpoint (~50) of the metrics range. This development is very similar to the SPX rally off of the March 2009 lows, where the market exploded in fits and starts above its RSI’s midpoint – but continued to gain traction in the face of a traumatized and skeptical market community. 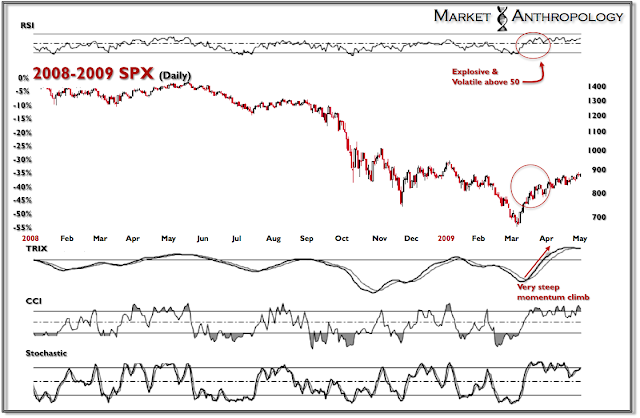 I will be keeping a close eye on the IBEX’s RSI this week to see if it once again bounces from the midpoint of the metric or breaks convincingly below, as the SPX did in January of 2009 – ushering in the final leg of the bear market. 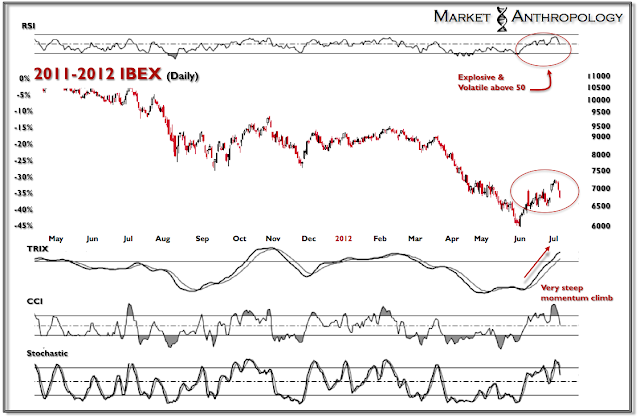 One analog that is pointing to further gains for the SPX and perhaps the IBEX as well is the 2007 (Finding Bernanke – II) comparison. Considering the current tape just recently expressed a positive momentum (TRIX) cross last week from a strongly negative position, the SPX may continue to follow the analog higher. 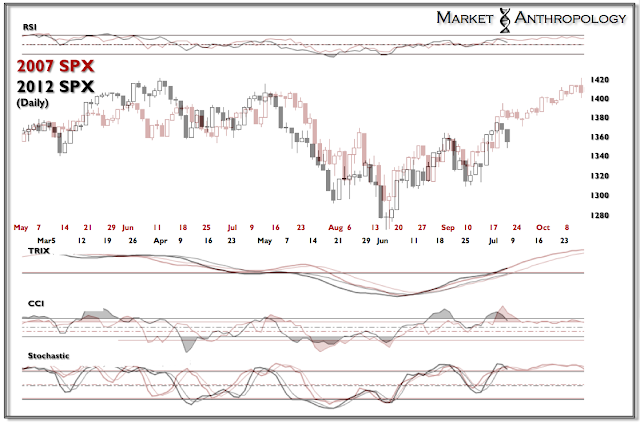 Coincidentally, it was exactly one year ago today that I published a bearish perspective on Spain titled,  Running Of The Bulls. Perhaps this time – with a bit less irony.
As always – Stay Frosty.
____________________
For intraday market musings and charts, follow me on Twitter @MktAnthropology