the Jelly of the Month Club 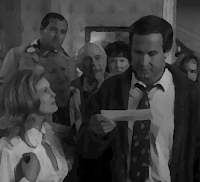 “Clark, that’s the gift that keeps on giving the whole year.
That it is Edward, indeed.”
Nothing reveals the tin can truthiness of finance quite like the year-end note. Considering it’s been a long December – and year – for most firms, we’d rightly speculate they’re harder to get through than sweet cousin Catherine’s Christmas Eve turkey. Some that we’ve consumed recently go down bitterly with a pinch of sentimental and mind-bottling platitudes on top of a reduced reflection of the year’s less than successful conquests. And while their investor base waits anxiously for a last minute reprisal of a much-needed Christmas bonus – alas, all that appears for now is a tattered envelope informing them of their enrollment in a jelly of the month club next year.

That said – and before we rush to deliver the Frank Shirley’s of the day to our respective doorsteps, we’re reminded that the warning signs have been visible for some time, and certainly well before capital was more foolishly committed over the past year or so. US equity market valuations – as measured by Shiller’s CAPE ratio, have been stretched over the past four years to relative historic extremes, as the tortious-paced economic expansion led the longest bull market in stocks since WWII. Granted, while we admit there’s enough subjective reasoning there to respectively debate the merits and folly of certain analysis or benchmarking, we once again defer to the markets wide-angle lens (see below), which distills for us the scatter of the path from the smoothed patterns of history.

In this respect, we’ve learned – as Shiller has always maintained, that you can’t use CAPE effectively to time the market, unless perhaps your expectations stretch across a much longer time horizon. Although it’s clearly visible to us today, considering the massive (~40 years peak to trough) scale of the backside of the long-term yield cycle – which we’ve argued in the past has proportionally expanded and helped drive the equity market sub-cycles – its very likely lost in translation on most participants.
So which touchstones have been useful over the relative short-term (~1 year) to appraise current market conditions?
Over the past year or so we’ve viewed the crypto markets parabolic ascent and breakdown as simply a distilled speculative proxy of the broader risk asset cycle, which includes equities. From a behavioral perspective, we’ve argued that Bitcoin personified the late-stage character of reckless speculation that existed beneath the current cycle, with its historic rally and reversal likely serving as a tulip totem of the times. As typical of the leading and higher beta asset for the cycle, the parabolic trend in Bitcoin was the first market to break last December, with the equity markets following suit in January. We’d contend that although some of us rightly saw the crypto markets for what they were last year, it wasn’t until the recent breakdown (i.e. 50 percent off sale) last month that underlying complacently and denial was broadly shattered. 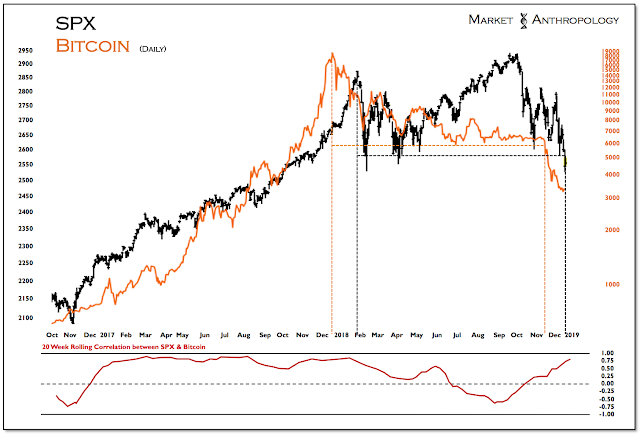 Awakening from widespread complacency are tumultuous events; with collateral damages spread far and wide with unknown secondary and tertiary tails. The best most of us can hope for is to not get chopped to pieces in the transition if you apply a more active hand in your investment process. Just don’t tell that to the passive investment gurus who over the past several years have pointed to the long-term uptrend of the S&P, seemingly implying with growing conviction that you’re a fool to not expect the trend to continue upwards indefinitely. 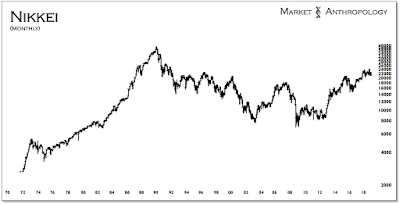 Perhaps they should reach out to their Japanese counterparts to see how the past thirty years have worked out for them in stocks, or open their eyes to the realization that the pronounced elongated scale of the current long-term yield cycle still points towards a lower for longer growth and yield environment – likely well into and through the next decade. 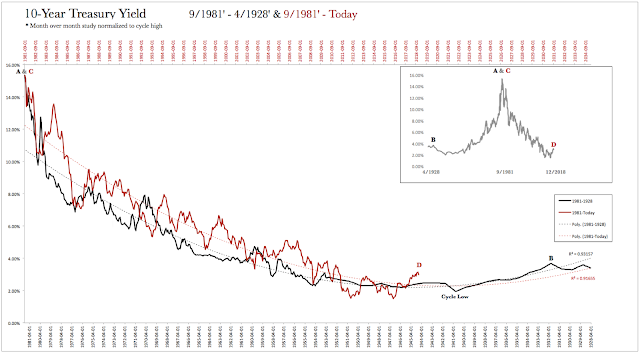 All things considered, this still implies to us an extended period of mean reversion in equity market valuations from the historically lofty extreme they enjoy today. While although many investors become exceedingly nervous with the prospects of a more secular rising rate environment, the truth is it would be a very positive telltale shift in underlying growth, which would accompany the start of the next long-term yield cycle. Considering the maturity of the current economic expansion and Fed tightening cycle, it appears more likely that yields will again retrace back within the lower trough range set over the past decade.

Although an oversold rally in equities is likely approaching – with a stick save ever likely by a more docile Fed this afternoon, what should concern equity market bulls is the leading intermarket range break lower in Bitcoin last month, and the fresh downside breakdown below this years lows in the S&P 500 earlier this week. While the Fed decision might spark a Santa rally over the short-term in stocks, we don’t believe the character of the market can repair the negative momentum traits on display this year in riskier assets.
at 12:48 PM