Why Gold May Finally Be Turning Higher

We came into last year with the idea that despite a historically low disposition at 3 percent, the 10-year yield had become stretched at a relative performance extreme. In less than two years, yields had run up over 100% above the July 2012 cycle lows around 1.4 percent. Even in context of previous rate tightening cycles, such as the one in 1994 that had caught the market offsides – the move was massive. When expressed on a logarithmic scale, the less than two year rip was the most extreme in over fifty years.

Not surprisingly, when viewed in this light, our expectations going into last year were for 10-year yields to retrace a significant portion of the move; hence, strategically we favored long-term Treasuries relative to U.S equities, which by most conventional metrics as well as our own variant methods – were also extended. To guide the arc of those expectations, we referenced throughout the year the complete retracement profile of the 1994/1995 rate tightening cycle – as well as an inverse reflection of the secular peak in yields from 1981 that momentum was loosely replicating on the backside of the cycle.

With a year of daylight between that extreme, yields are still following both retracement profiles – with 10-year yields just today feathering the panic lows from last October. While respective retracements in both Treasuries and equities may manifest over the short-term, strategically speaking, we continue to favor Treasuries – considering that the U.S. equity markets remained relatively buoyant last year. 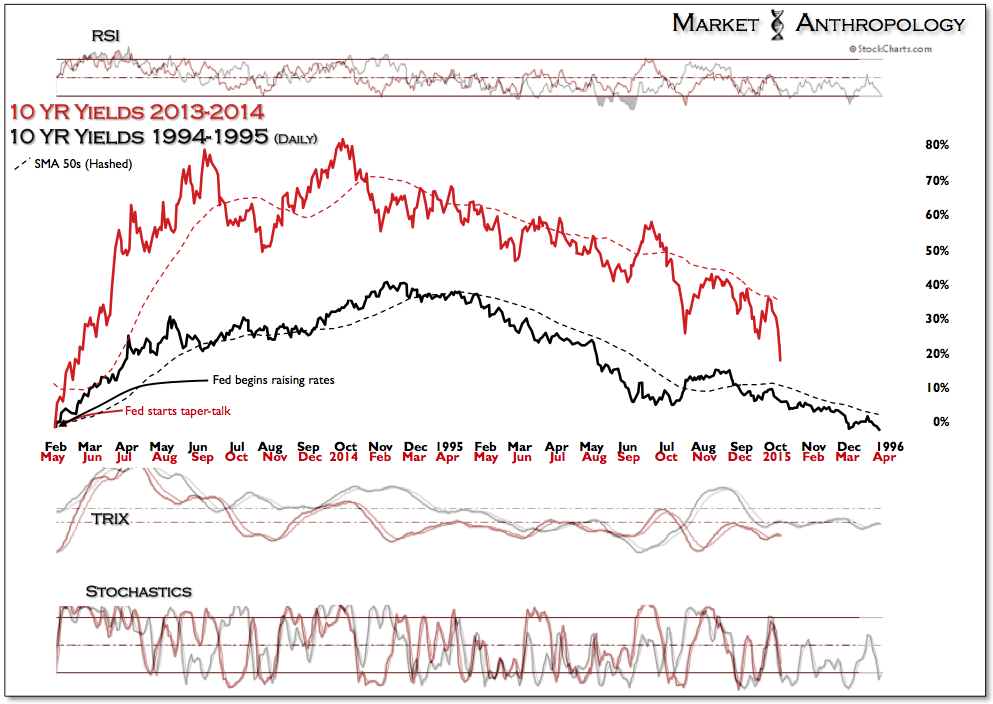 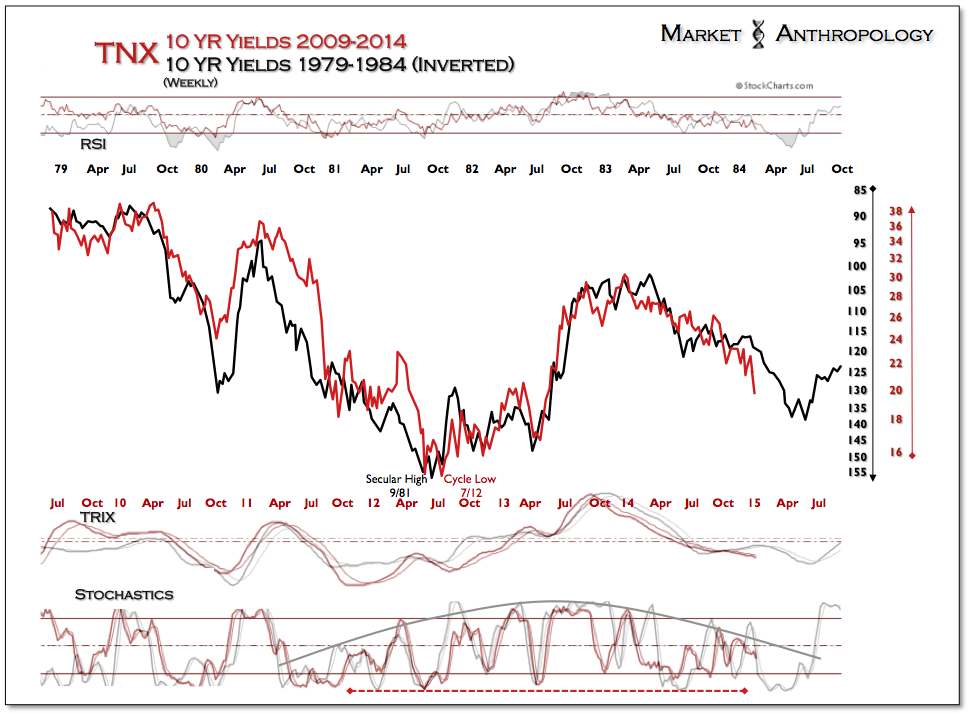 What has been more difficult to handicap is the large differential in performance between durations in the Treasury market, with shorter durations greatly supported by expectations that a more conventional tightening cycle would eventually transpire, as well as the influence of ZIRP – which has muddled the waters from a comparative perspective. Over the past few months we have noted the significant spread in performance between 5 and 10 year yields, as a literal expectation gap in the market has continued to grow.

Generally speaking, this market mentality also maintained pressure on assets such as precious metals and emerging markets throughout last year, as traders waited for a second shoe to drop with further tightening delineated by the Fed. Our general take has been that the lion share of tightening – both through the posture and then completion of the taper, has already been completed. From our perspective, pivoting on a policy that actively and passively supported the markets to the tune of over 4 Trillion in net assets purchased, is the closest thing you will find to materially “tightening” at this point in the cycle. Actions and expectations are all relative, which is easily lost in this market – especially with the Fed at ZIRP for over six years. We fleshed some of these thoughts out in The World According to ZIRP last October. If and when the Fed eventually gets a window to cut the ribbon and take us off ZIRP, the move will likely be exceedingly modest and ceremonial at best. That said, we continue to be far less confident that even a modest rate hike arrives sooner rather than later and still expect that the equity markets will continue to normalize with current policy (i.e. QE free) – which for better or worst will broadly influence expectations of future policy.

Needless to say, market conditions are anything but conventional these days, although we do believe that gold – a leading market, has made its peace with policy first as well as digested the overshot from misguided inflation expectations that slammed shut in 2011. Over the past year we’ve posted a version of the chart below that showed gold relative to 10-year yields was at a level commensurate with significant lows in the past. And while 10-year yields played the part last year, the large expectation gap – that is captured below in red in the shorter end of the Treasury market, held gold in place – until now. Gold appears to be finally breaking out of its broad base as the extreme correlation drop between durations that began with the taper in December 2013 exhausts. As we pointed out last year, this same dynamic – to a lesser degree, manifested with the previous tightening cycle that began in June 2004. Once the policy shift was digested, gold broke out of its much smaller consolidation range and correlations were reestablished in the Treasury market. 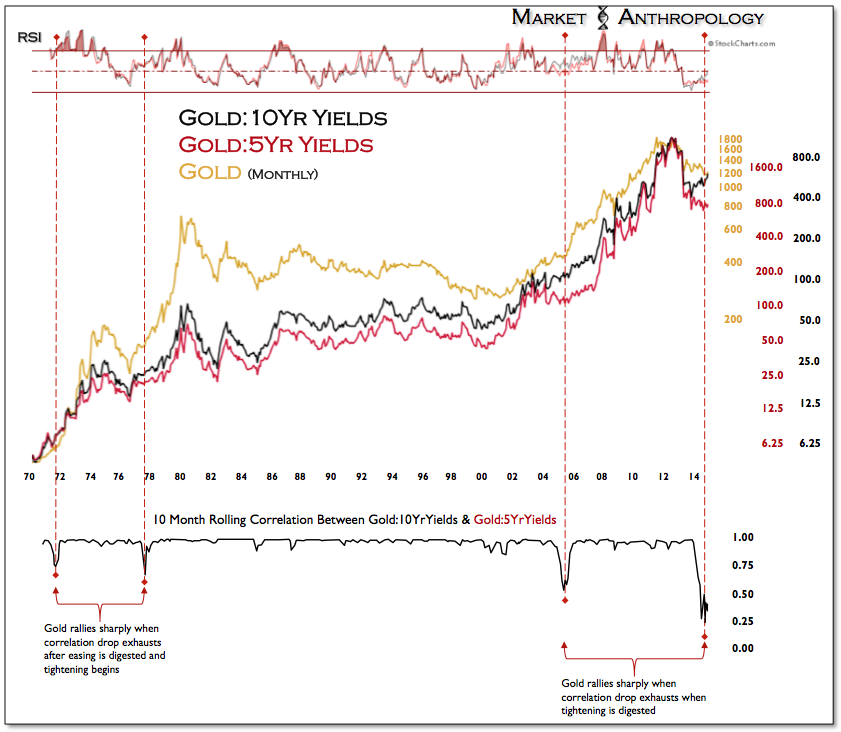 Interestingly, the two other occasions where the Treasury market dropped out of tune with respect to durations and gold was during the 1970’s bull market, where the dynamic with the Fed was the polar opposite of how it reacts with policy shifts today – as well as in the Treasury market. Back then, when the Fed raised rates – gold rallied. When the Fed eased – gold corrected.  As such, gold trended with the relative performance between 5 and 10-year yields.

That said, we continue to see the closest parallel with a broader cycle continuation period – such as the mid-cycle retracement in the 1970’s, that shook the tree strongly before another set of branches completed the larger move. While the saplings in this cycle have taken their sweet time to germinate over the past year, we like the long-term prospects for the sector – especially relative to the U.S. equity markets. 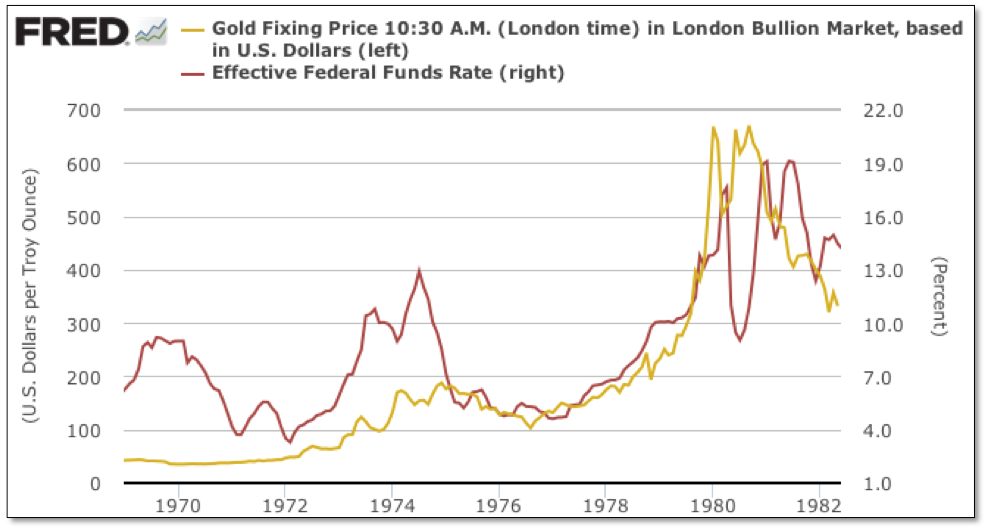 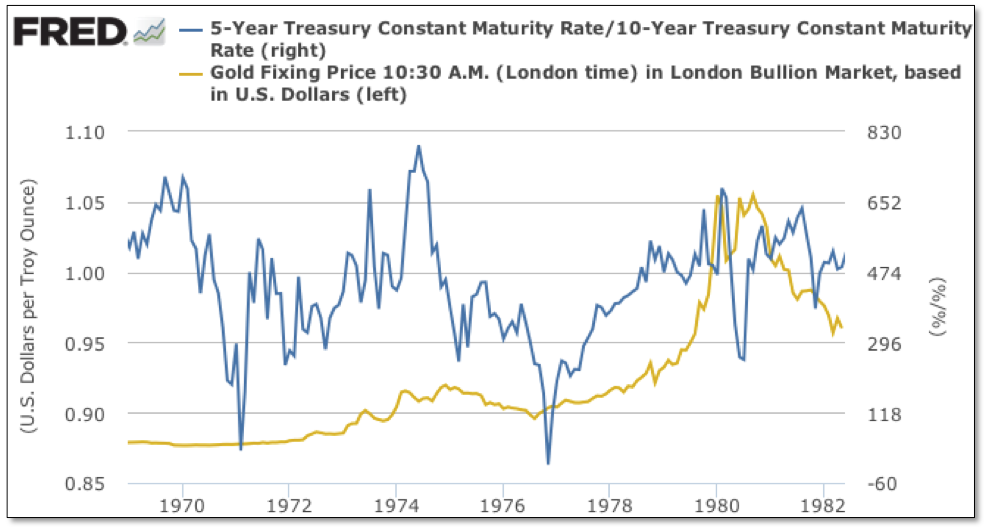 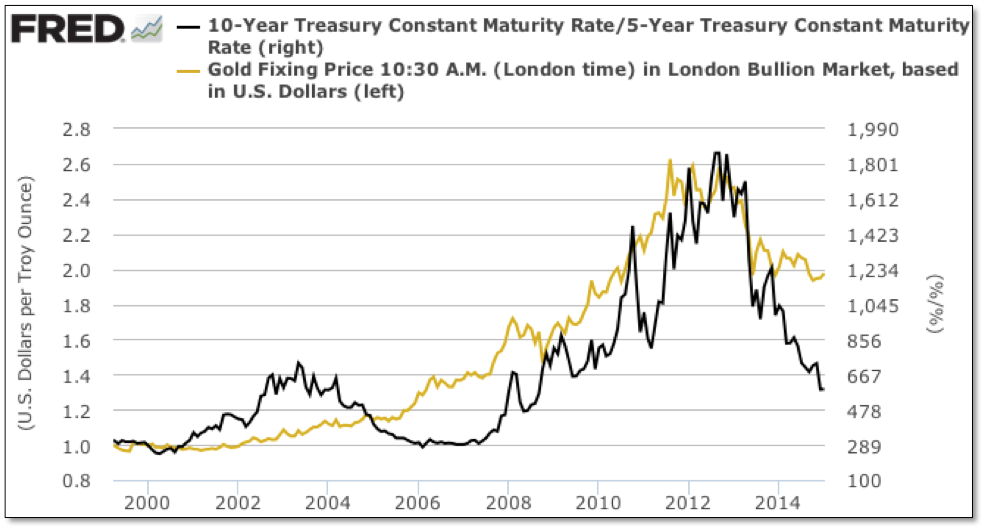 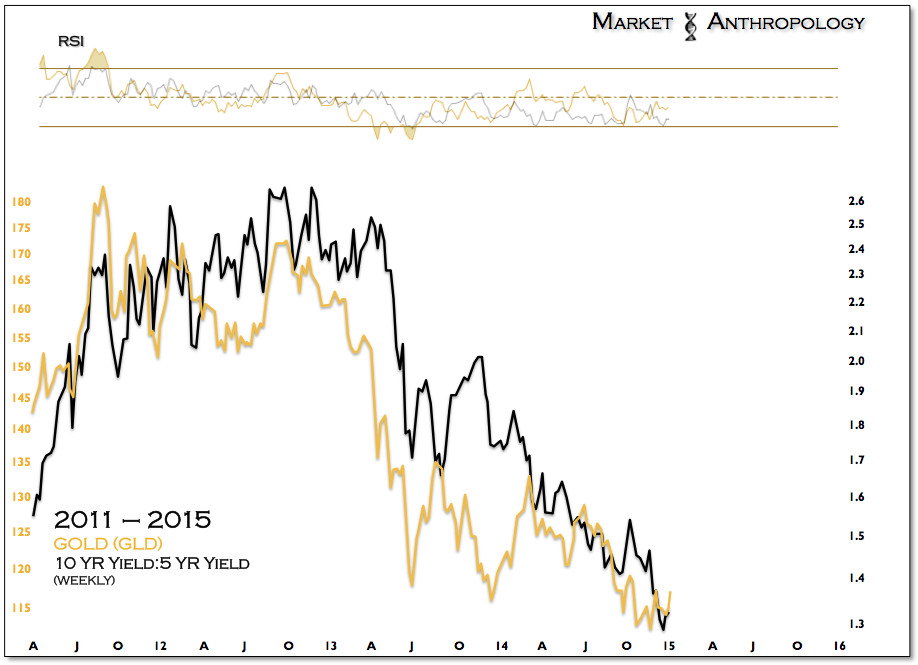 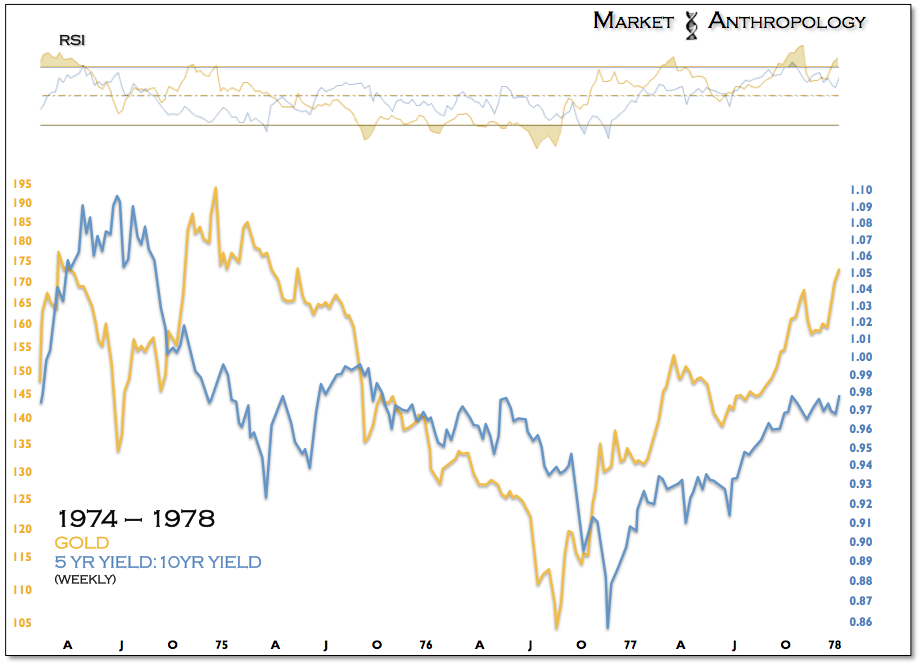 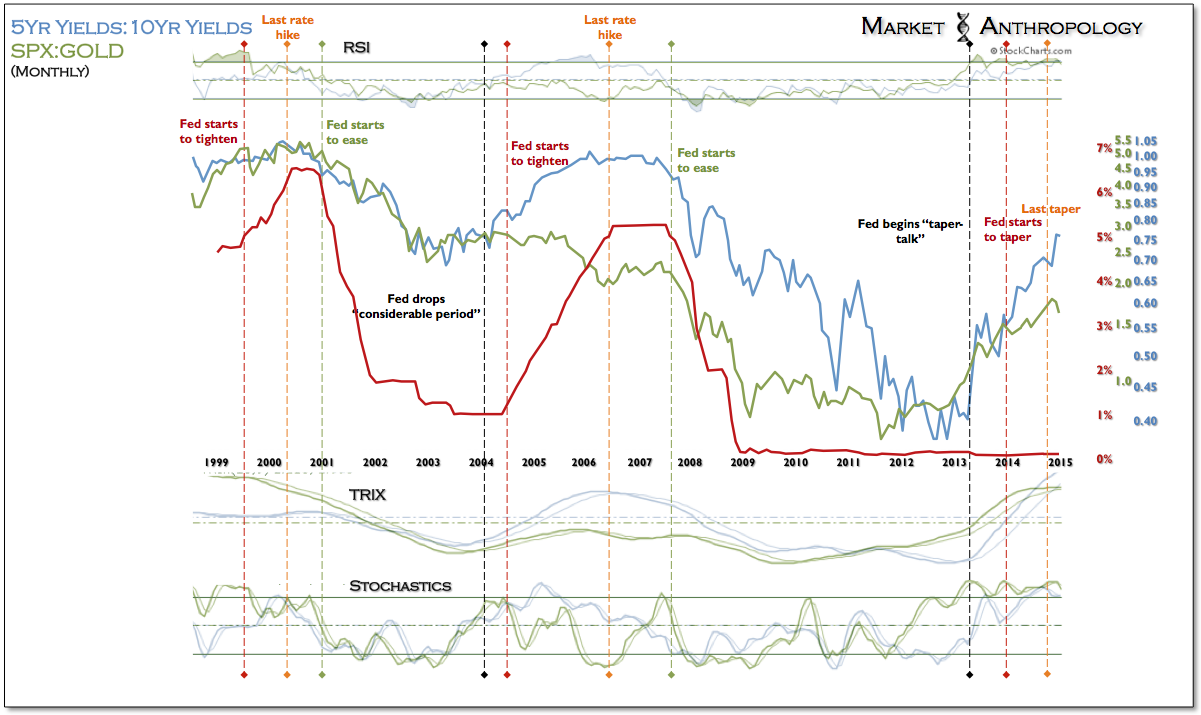