What’s Up With Silver & Gold?

Anecdotally, we are seeing and hearing from those anxiously long the precious metals sector and contentiously short. With gold and silver down sharply in the early morning session – then reversing violently higher, the emotional spectrum in the market is likely diverged at or near another extreme. Over the past 10 months, both bulls and bears alike have been waiting for the next leg to commence. Instead, the market has played the jester – traversing a narrowing range and taking turns at frustrating both sides.

When will the argument resolve itself ?

Although it’s felt like a standing room only performance of Waiting For Godot, we expect long-term yields still hold the key to the next chapter for precious metals and the broader market story. We continue to view the move in 10-year yields as historically stretched to a relative extreme (see chart), a notion apparently lost on many participants as the Fed tapers their way to the end of QE and through an esoteric Fed cycle.

Just this week we saw that a Bloomberg survey of 67 economists unanimously expected 10-year yields to rise over the next six months (see Here). From a contrarian point-of-view, this should wake up participants that underlying sentiment is dangerously listing towards one side and the downstream and kinetic effects could be severe in many markets. The ratio chart below depicts the relationship between gold and 10-year yields, which as we noted last December had also reached a historic extreme. If and when long-term yields breakdown, we suspect a much stronger tailwind to develop behind precious metals. 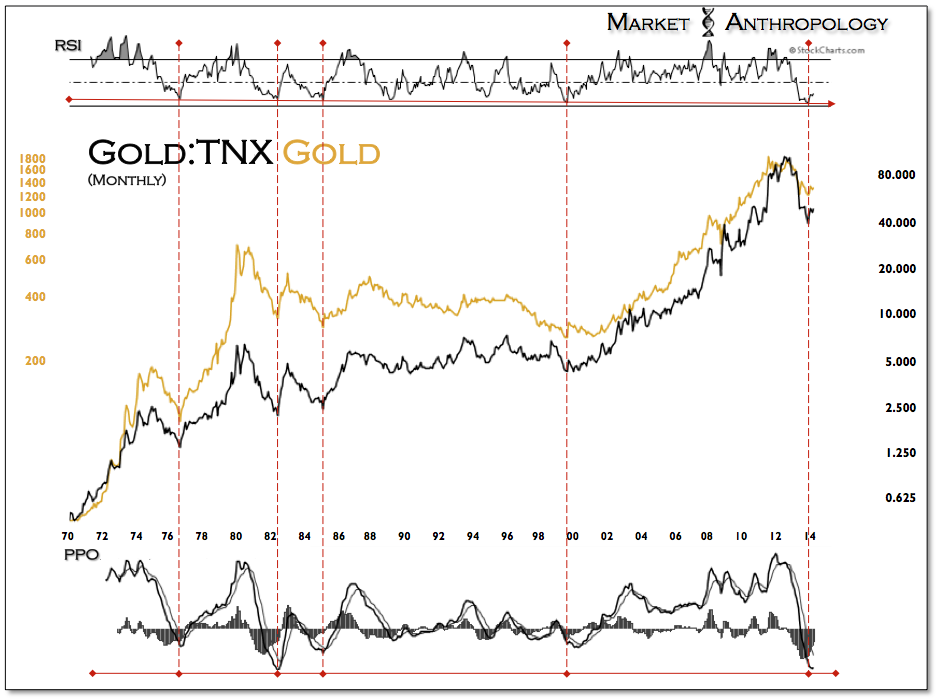 We incorporate comparative analysis into our research because it provides a historic context of where a market may sit in its respective cycle. In essence – and as past is prologue, does risk now favor the short side or long? We often appraise and contrast an asset by normalizing a specific window in varying timeframes – based on either momentum, proportion or seasonality. The research provides a reference perspective, based on big picture asset trends and a strong belief that market psychology and performance cycle and structure themselves along a defined continuum of exuberance and despair. Like most behavioral analysis, it is both art and science – qualitative and quantitative.

The series of charts below present a performance and seasonal study of four overlapping asset cycles that boomed, busted then bounced with very close seasonal tendencies. While we have often defined a study by its respective momentum or cycle low and highs, for this series we just looked at performance that was normalized to a specific duration. You will notice that as one cycle was breaking down – another was beginning its summit approach. While there have been many through the years, we chose the Nikkei, Nasdaq, silver and biotech – because their story lines now overlap and the seasonal tendencies are so similar.

As the Nikkei was breaking down at the start of the 1990’s, risk appetites changed and developed a palette for the Nasdaq. After the Nasdaq cracked going through the Millennium, investors turned to precious metals. The cycle can also come full circle, as we believe the performance and seasonal presentments of the current risk du jour describes. As the biotech index now turns down just past its zenith, we expect silver and the precious metals sector to begin making their way materially out of the trough they have trended towards over the past three years. 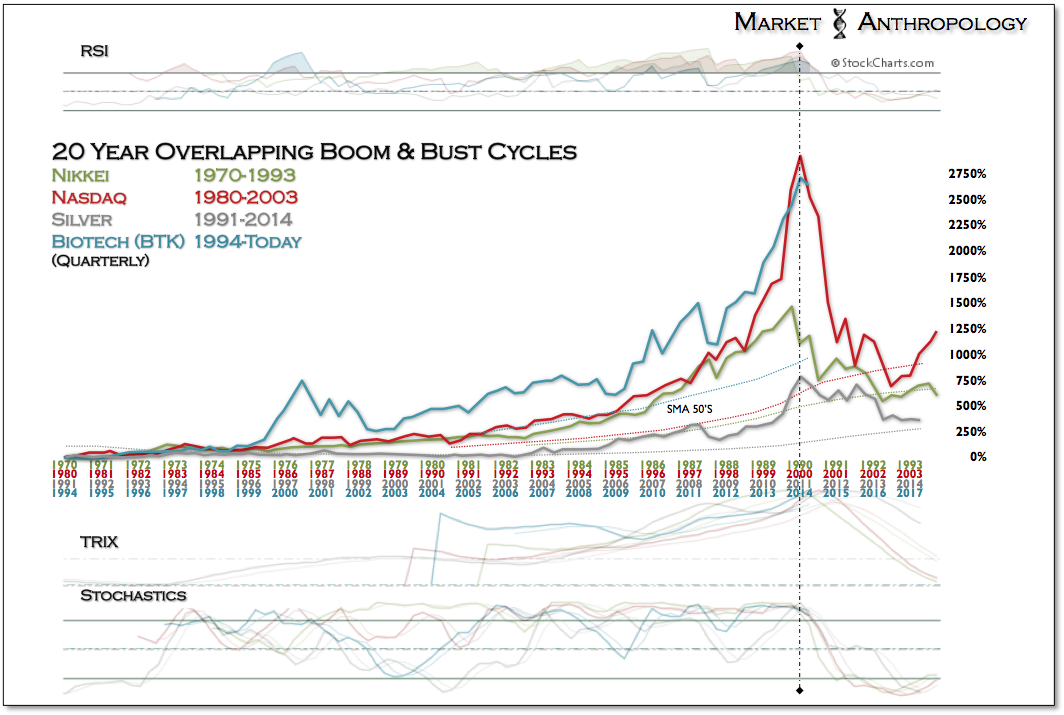 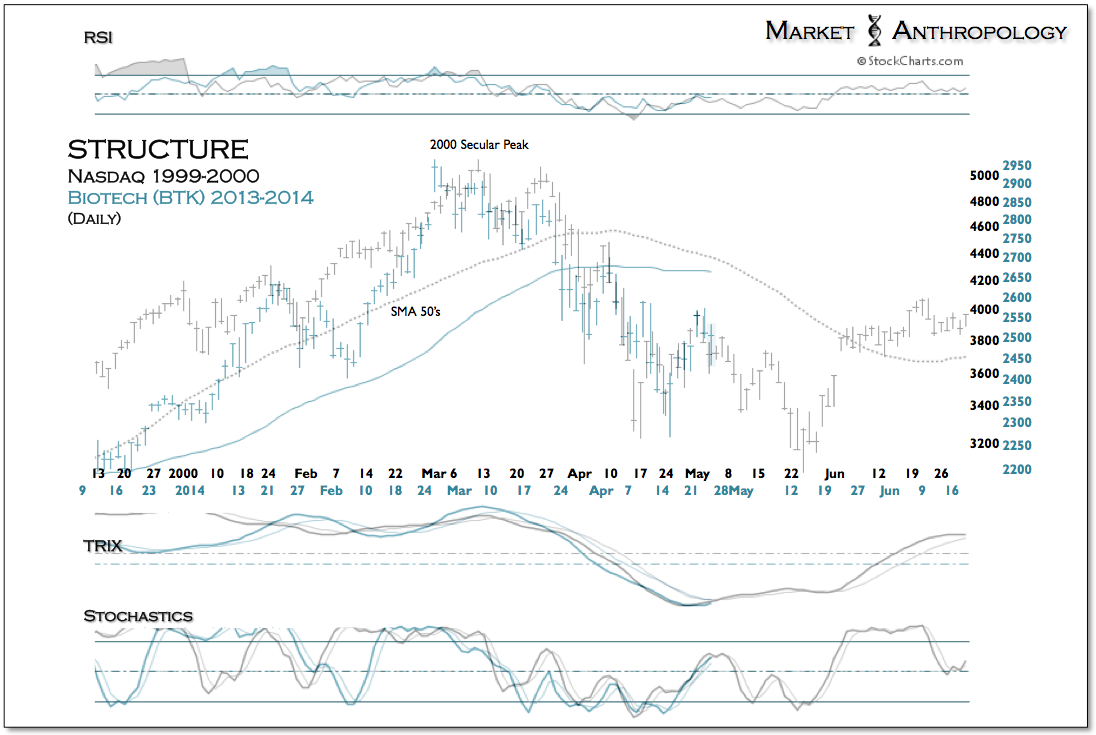 We have followed the structural, momentum and performance similarities of the Nikkei and Nasdaq busts quite closely over the past three years. Although we’ve needed to adapt to current market conditions, both historic markets have greatly helped us navigate precious metals through the top, middle and now bottom parts of the cycle. While our legs are admittedly tired of watching for the next turn, the historical perspective has provided us with a patient and even keel. 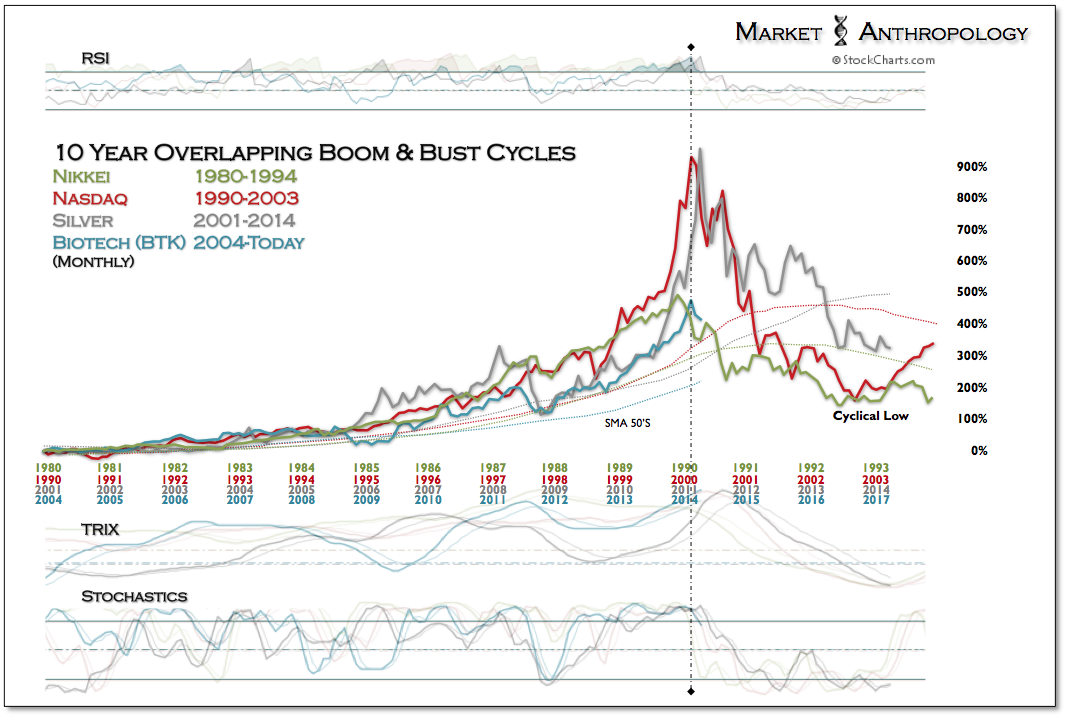 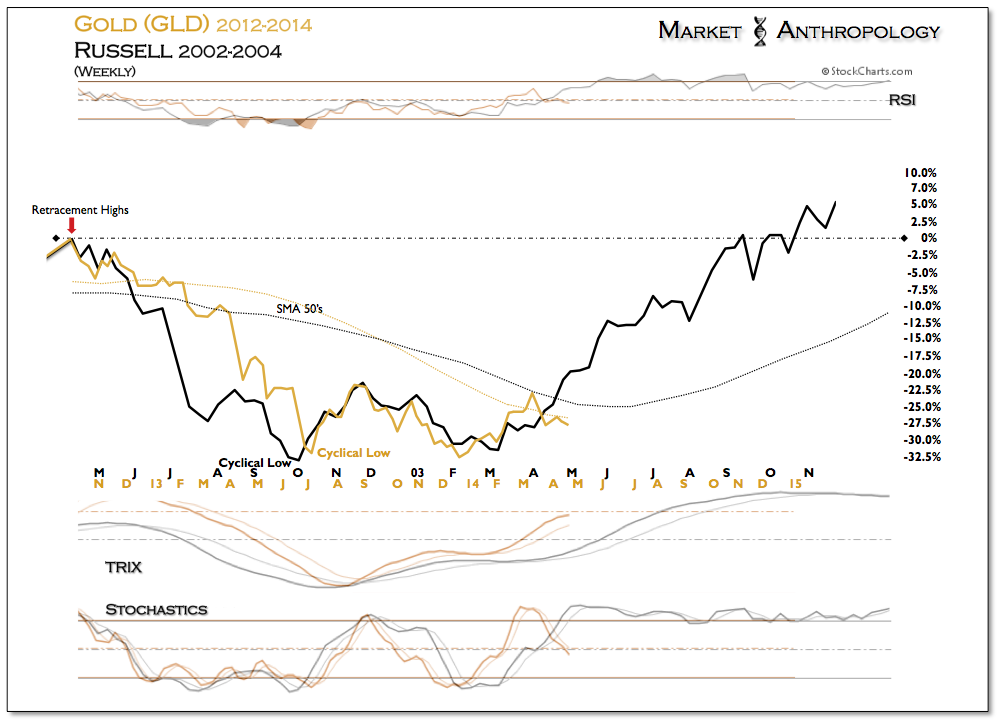 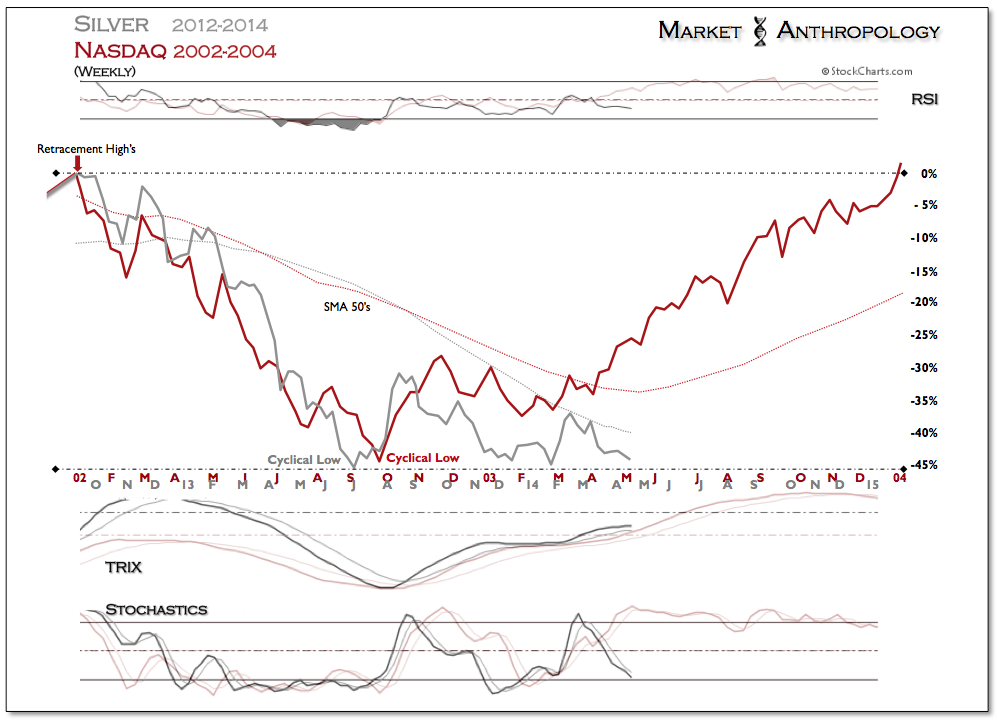 Over the past few months, the silver:gold ratio has diverged from the comparative profile with the historic NDX:SPX ratio. While it’s something that we are keeping an eye on, momentum appears tightly coiled and presented with pronounced positive divergences as the ratio tests last summer’s low and looks to converge with the NDX:SPX ratio. If today’s early action is any indication, the support appears strong. Moreover, silver miners are still outperforming their gold counterparts – which have been leading spot prices in the yellow relic higher. 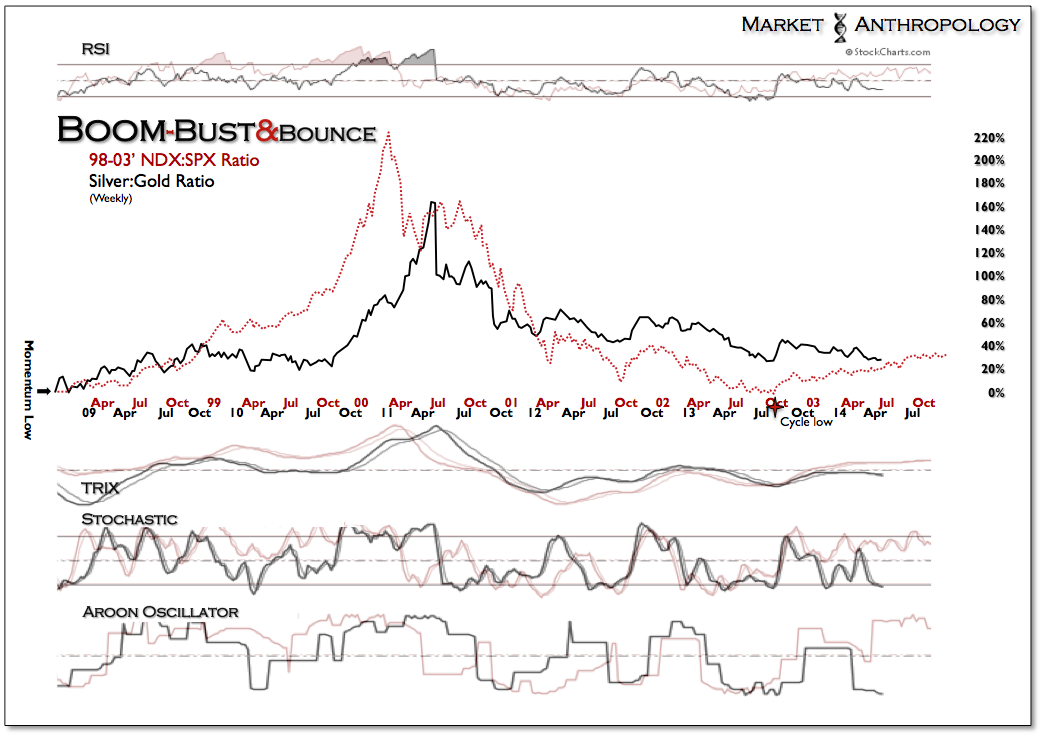 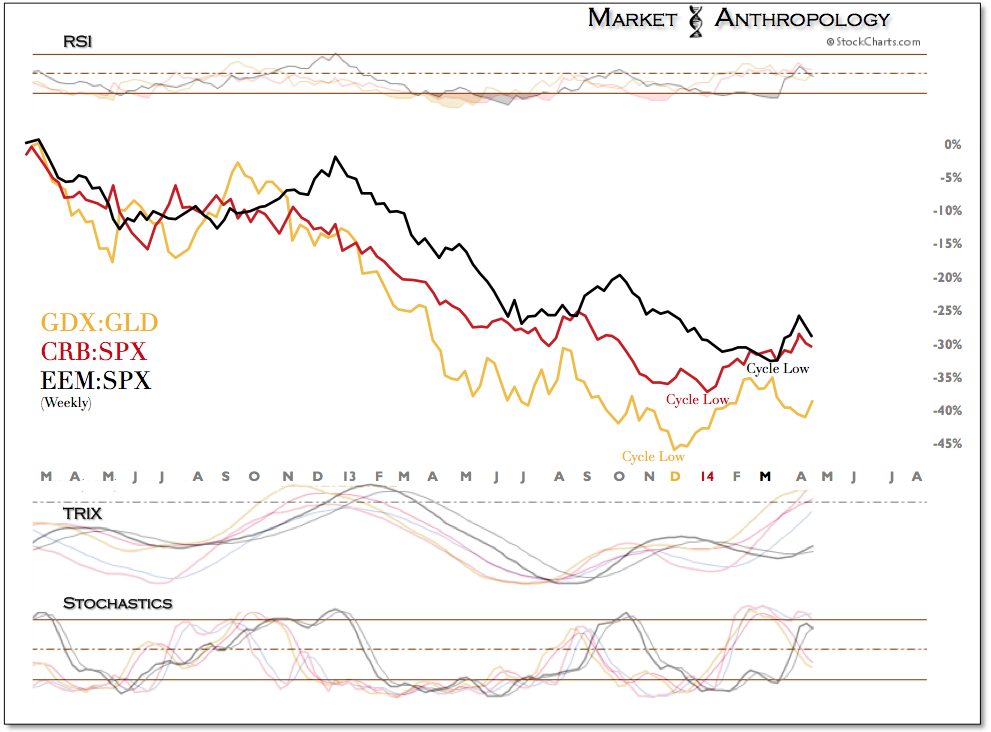