In our note last week we had cautioned that the Australian dollar was approaching a prospective interim high – when viewed through its 2008/2009 market profile. Over the winter, we had relied on this same historic market environment for comparative reads, while various commodities and their corresponding currencies were working themselves towards what we had expected would be another significant and disorderly unwind.

Silver, gold, the euro and the Aussie were all viewed as probable barrel candidates for another run over the edge.
________________

“As we cautioned on Tuesday, the risk continuum in this environment extends beyond normal distribution; i.e. – those looking at mean reversion strategies, either from an oversold price or sentiment perspective – may find themselves in a barrel cascading over the edge.

… Although the euro continues to follow the structure and momentum unwind of the Mirrored Pivot comparative (for an explanation, see Here) – the kinetic potential across the hard commodity-scape appears to be of the 2008 variety. In either case, we expect the next phase of the decline to become more disorderly on the downside.” The Cascades 3/2/13

A few months later, three of the four candidates had made their way over the brink and into the plungpool at the bottom of the falls. While the euro did weaken into the spring, its notable resilience was one of the first indications to us that the over two year old meandering and turbulent commodity unwind was likely approaching its delta.

Longer-term, an upside bias sits with the bulls.

Although the divergent momentum structure and timeframe of the two declines have pivoted across similar durations, this years scarped cascade was less than half the size witnessed in 2008.

Because of this, we also show in the lower right chart the 2008 final wave structure/fractal and retracement bounce fitted to this years shallower move. Both structures pivoted directly at the 50% retracement level.

Worth mentioning was silver’s notable and uncorrelated strength it exhibited during the Aussie’s retracement decline that began in January 2009. As we alluded to last week, we would expect the precious metals sector in the current market environment to run with the yen for a spell as the equity markets have trended with the Aussie. 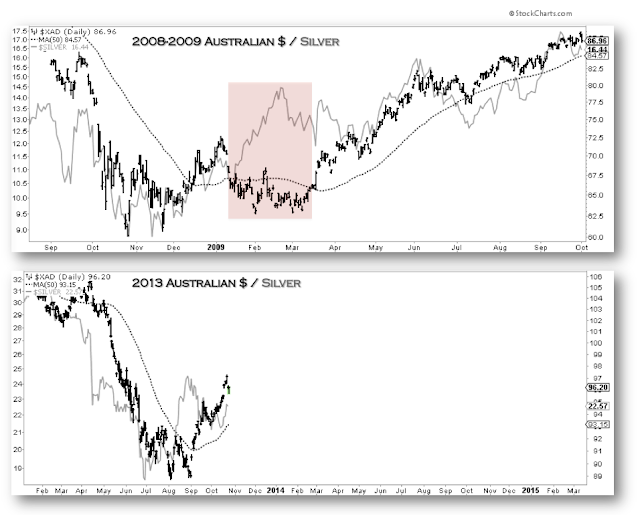 Over the past week the performance of emerging markets relative to the SPX has rolled over. Our expectations are that emerging markets are leading the moves here and should also lead out of another prospective low. 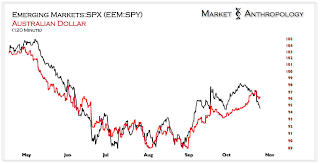 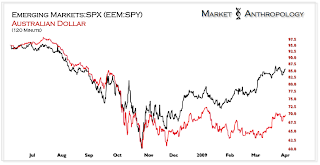 The “digital signal” between silver and the Aussie was dropped. It appears the Aussie just found silver’s old analog highs from late August. 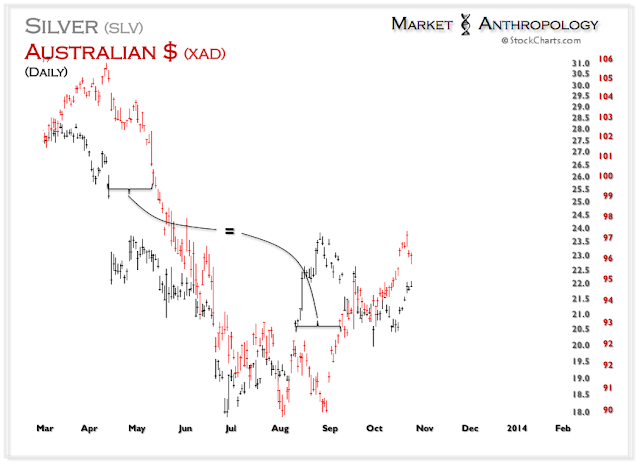 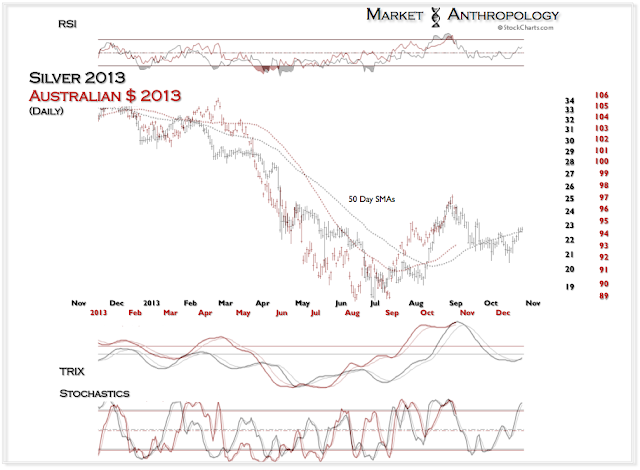 The long and short of things: despite the equity markets progression towards its strongest positive seasonal bias (Nov-Jan), we’ve highlighted this week a few hurdles the markets need to overcome in the short-term to extend their gains.

Signs of the Times – points towards a rest and consolidation for the Nasdaq through November.

Hard to Compre-Yen-d – sees turbulence on the horizon in Japan through the yen into November.

Today’s note – illustrates a prospective retracement decline for the Australian dollar, which taken in context with a strengthening yen would further add to market pressures as carry trades were quickly unwound.
at 8:58 AM