Waiting on a Train 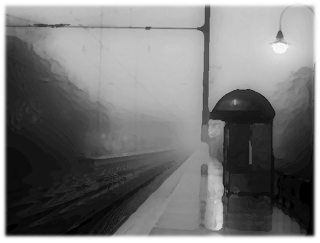 Cut your losses quickly.
As a trader, you hear it as often as, “Have a nice day.”
The problem with these axioms is that they are generalizations towards a discipline that in many cases is antithetical to stereotypes. I wholeheartedly agree, it is prudent advice to follow in a typical continuation or trading range environment.  However, when it comes to extreme market behavior, there is an exception to the rule.
By late January of 2009, the equity markets were about as psychologically bludgeoned as a market could sustain. The financial index (BKX) had loss over 70% of its 2007 market capitalization and the media was debating the merits of a broad nationalization of the banking sector. Nouriel Roubini was sharing a table at Nobu with Brangelina and ZeroHedge’s byline of “on a long enough timeline, the survival rate for everyone drops to zero” was about to be penned at the market bottom.
It was dark out there – real dark.
And yet, we should have all bought more.
I started accumulating a position on the long side in the financial sector in late January after the BKX liquidated over 20% on one Monday morning session alone. And while the position became almost immediately underwater in a matter of days – I had done my research (a snipit of it here and here), believed in the trade’s thesis and waited for the stars to align.
The trade took about one month to materialize.
Because I was utilizing leveraged ETFs to commit the trade, the initial position would lose roughly a third of its intrinsic value. However, by layering equal positions into the trade, my cost basis was eventually within a few percent of the market low that March.
A few months later the aggregate position had more than tripled.
I had traded the initial position’s intrinsic value for time. Time would be the great revalator once again.
Buying and selling into a market extreme is one of the few occasions where dexterity doesn’t count for much. Caveat being, as long as you are operating without extraneous margin on your position, have done your research and know which side of the tracks to wait for the oncoming train. This kind of trading strategy only works during major market inflection points where it pays to be aggressive and buy fear.
The angle of incidence will equal the angle of reflection.
However, if you have misread the tea leaves of continuation for exhaustion – then it’s just magnified pain and in hindsight – reckless. It is a high risk, high reward trading strategy.
The comparison of my financial sector washout trade in 2009 and silver today (see here), seems appropriate because they both display(ed) all of the characteristics of extreme price action. In late January of 2009 it was a waterfall bottom. Today in silver it’s a parabolic top. They are both artifacts of exhaustion in the tape. The Ying and Yang of disequilibrium. They are not discrete patterns to notice.
Leverage ETFs should only be utilized by professional traders. In the right desensitized hands they are outstanding tools for capturing a trading thesis over the near to intermediate terms. Many traders bleed themselves to death and second guess their research by entering and exiting a trade several times before the market turns. It can be death by a thousand cuts and quite confusing to navigate.
In a trading and media environment that is so heavily dominated by the approach of high frequency trading, “cut your losses quickly” can at times preclude you from missing the train entirely. It is often prudent advice to follow in the typical continuation or trading range environment.
However, when it comes to extreme market action, there is an exception to the rule.
I have heard on numerous occasions over the past week traders comparing a silver short in todays market as “picking up nickels in front of a bulldozer.”
That analogy does not seem appropriate to me, because I am not trying to pick up nickels – I am trying to pick up silver dollars.
Perspective is everything.
_______________________________
I just joined Twitter, you can find me here.
Disclaimer: This is not investment advice. Always do your own due diligence and research. Erik Swarts is not a registered investment advisor. Under no circumstances should any content from this website be used or interpreted as a recommendation for any investment or trading approach to the markets. Trading and investing can be hazardous to your wealth. Any investment decisions must in all cases be made by the reader or by his or her registered investment advisor.
at 12:02 PM