Analog studies are typically at best a broad delineation of future prices in a comparative market environment. They can at times give a very acute replication or fractal study of price structures (see Here or Here), but their utility to traders usually involves a great deal of interpretation and allowance of the current markets respective nuances. In many ways this is similar to conventional technical or even fundamental analysis, whereas two analysts will find differing conclusions based on their own methodologies of the data.
The ongoing credit crisis presents a unique environment for this kind of approach, because by definition of transmission – its effects to the markets are replicated through the system as the crisis magnifies and reaches new corners of the credit markets. I have written recently of these comparisons (see Here), broadly describing the first phase of the crisis as an impact to private credit (2007-2009) – while we are now experiencing the larger sovereign side of the ledger.
The following chart of the 10 Year U.S. Treasury:SPX ratio is a good expression of this dynamic – as Treasuries continue to defy gravity in the seemingly endless flight to quality. What is alarming  (although it makes logical sense given the comparisons of capital in the sovereign debt markets) is the proportions of the structures have been larger this time around – when contrasted with the opening salvos of the financial crisis in 2007. 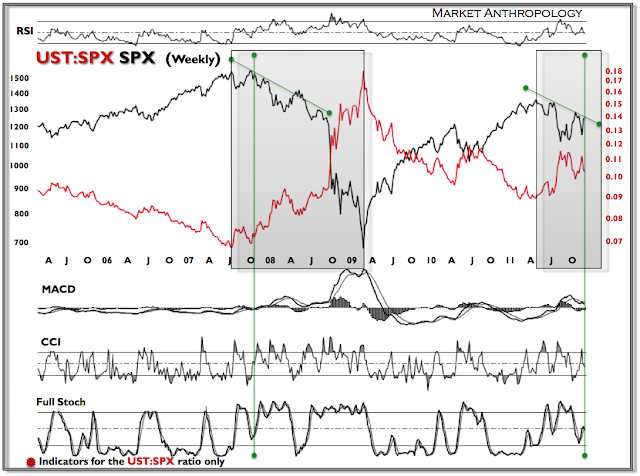 Not surprisingly, both 2007 and 2011 have experienced very similar volatility expressions, as traders react to the second phase of the crisis – much as they did in 2007. 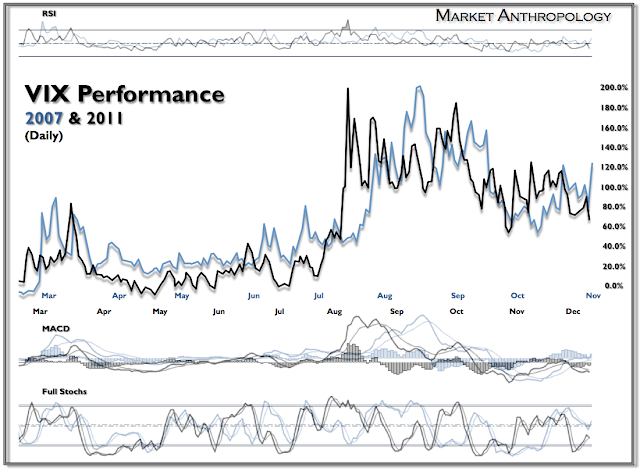 And while it is difficult for many investors and traders to consider the prospect of further gains in the U.S. Treasury market, the long-term historical analogs would indicate that Treasury yields will likely fall further – eventually taking out the lows from the last cycles trough in the 1940’s. What is interesting when placed in the context of history, is the rate environment of “the depression within a depression” in the late 1930’s as rates fell further when the equity market violently reversed in 1937 into 1938.
Bill Gross seems to have come to terms with mother nature in once again returning to the Treasury trough (i.e feeding), after giving Bernanke the benefit of doubt in adversely affecting the long term forces of the credit markets. It seems history will once again repeat itself and give the Great Recession another chapter as well.
Fool me once, shame on you. Fool me twice – well…
p.s. – I wasn’t fooled the first time. 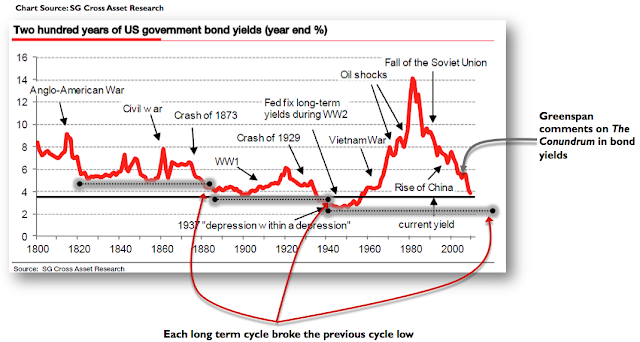