A brush fire broke out last week on the Iberian peninsula – roiling world markets and reminding investors that the embers of the European financial crisis are still smoldering beneath the ashes of the previous blaze. Last Thursday, shares of Banco Espirito Santo – Portugal’s second largest bank, were suspended from trading after falling some 17 percent in the session. The spark was thrown off the day before, when Espirito Santo International – the privately held parent company and controlled by Portugal’s most powerful family, delayed repayment on short-term debt owed to customers of its Swiss bank subsidiary.

The recent events were set in motion last year, when the ECB mandated that a broad scope asset quality review (AQR) of all European banks would be completed in 2014. This past May, pressures started to build when Banco Espirito Santo disclosed that an audit ordered by the Bank of Portugal, had found Espirito Santo International – in “serious financial condition” with accounting irregularities. Further risks extend from how interconnected business economies are through the significant reach of Espirito Santo International, and one could argue presents a microcosm of the broader hazards still unseen throughout Europe. From the Times:

In a further sign of how interconnected the businesses are: Banco Espírito Santo owns a 10 percent stake in Portugal Telecom, while Portugal Telecom holds 2 percent of the bank. – Back From the Brink, Portugal Still Has a Long Way to Go – NY Times 7/15/14

In May 2011, when Portugal received a €78 billion bailout from the IMF and EU, Banco Espirito Santo was the only large bank not tapping the lifeline and requesting bailout money. In hindsight, it appears likely because of the significant risks and skeletons that would have been disclosed in opening its books to oversight by the IMF.

In many ways, it’s emblematic of the nearly mission impossible challenges the ECB face in both restoring confidence in a historically opaque and entangled banking system, while opening the lending channels that reflexively constricted throughout the long downturn in Europe. All the while, juggling the different needs and concerns of 18 separate economies and political systems – some of them less than upstanding through the years. If you think the Bank of Japan has had a rough ride (and they most certainly have) down hill over the past 25 years, the ECBs descent over the past six and into the indefinite future could very well eclipse many of their worst expectations. On one hand, we find it highly unlikely that the conditions personified in Banco Espirito Santo is an isolated example throughout Europe – and on the other we are skeptical of the political capital that inevitably will be required and that was already in short supply as the initial bailouts were negotiated and implemented.

What the ECB has finally requested with the AQR is a better late than never initiative, but it remains to be seen whether they can successfully mitigate the same perennial conditions that haunted Japan over the past three decades with zombie banks not weak enough to go under and neither strong enough to lend. Moreover, near term risks remain as greater sunlight is provided by the AQR and when the ECB finally takes over oversight of banks this coming November – that have enjoyed historically convenient political understandings and largely benevolent market conditions over the past two years.

Right on cue with our equity cycle comparative with Japan – circa 1996, the events in Portugal last week helped extend the recent pivot lower in Spain’s equity markets, from what we expect was a cyclical high for the index in June. While the initiatives taken by the ECB over the past year pave the way towards additional stimulus in Europe, we do not believe it will be enough to overcome market conditions already stretched – both on an absolute basis and from a comparative perspective with deflation’s most recent prisoner. 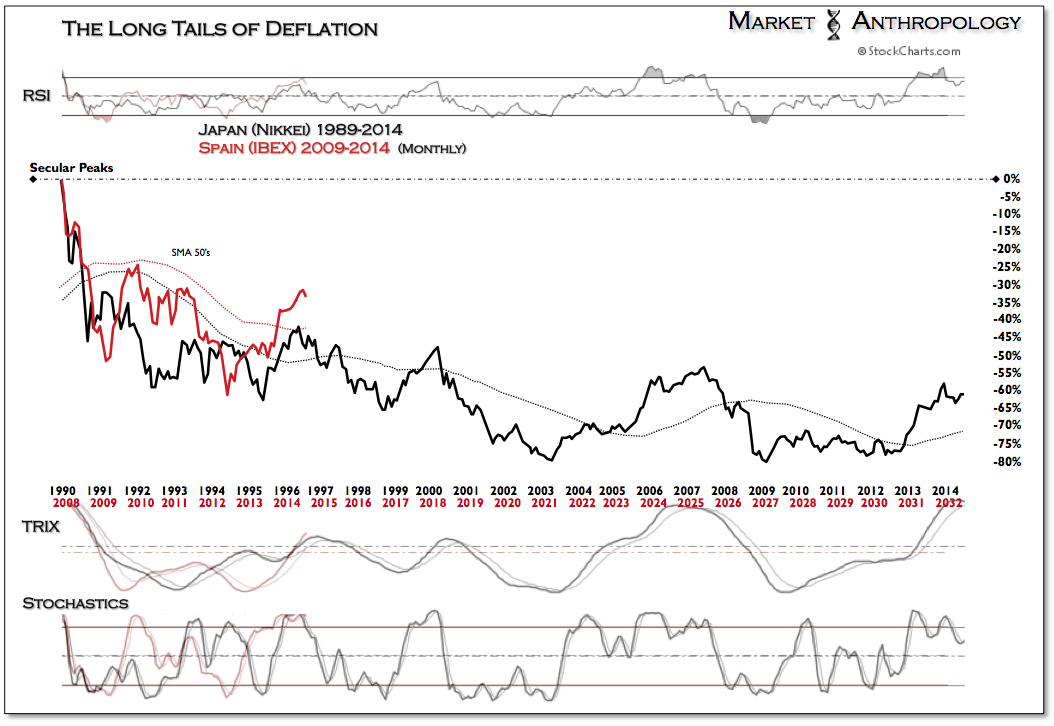 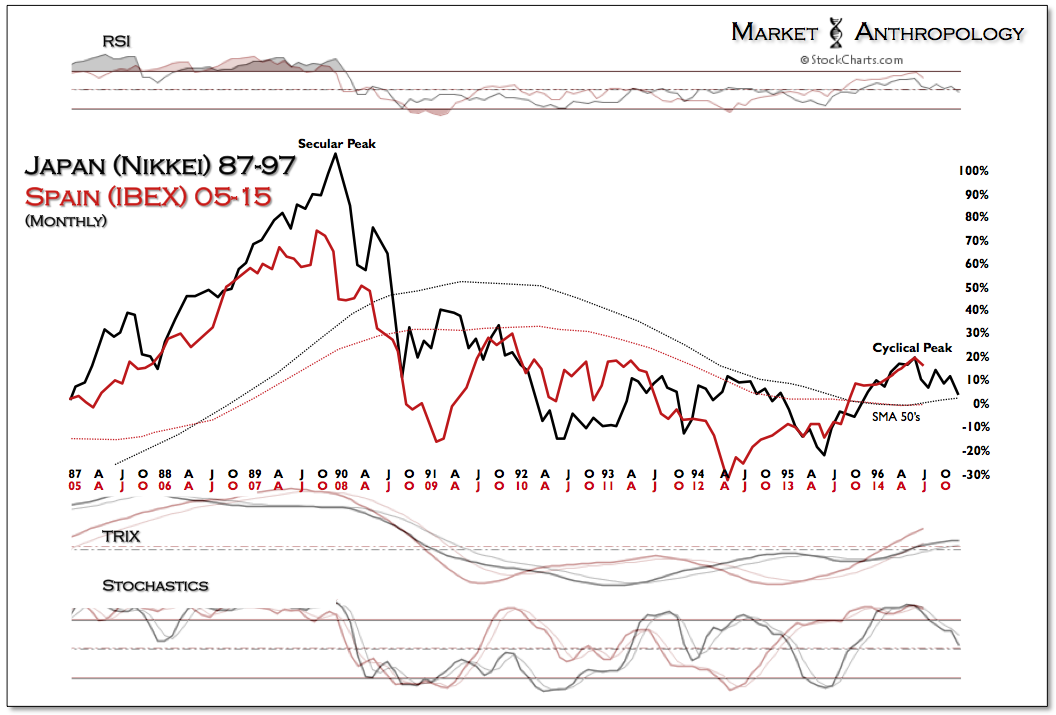 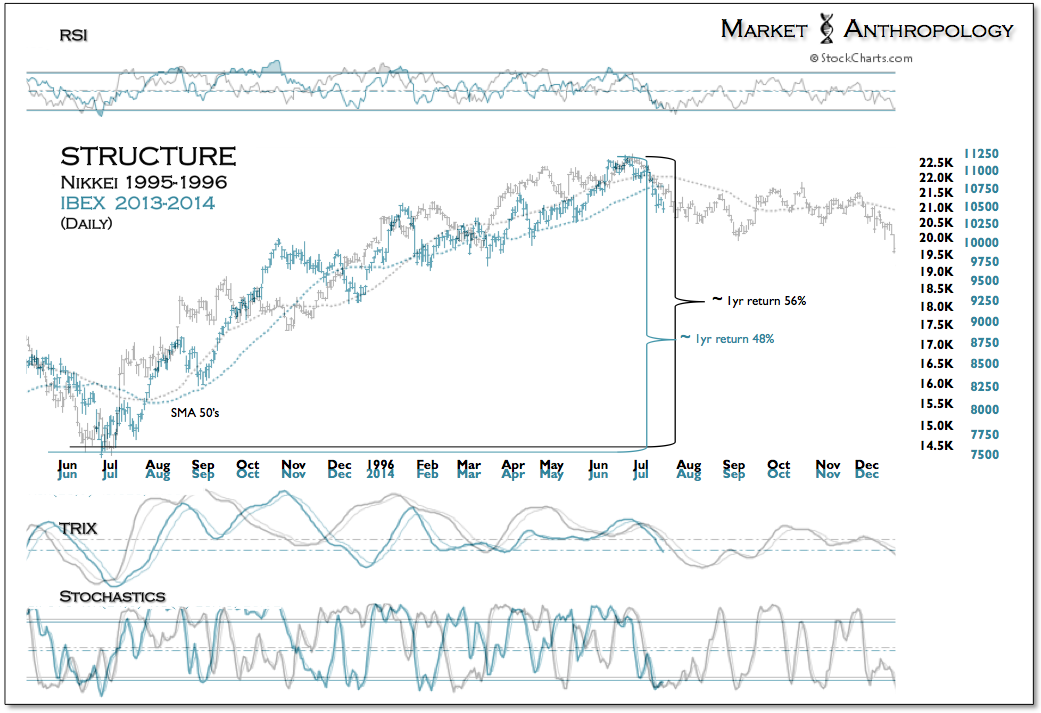 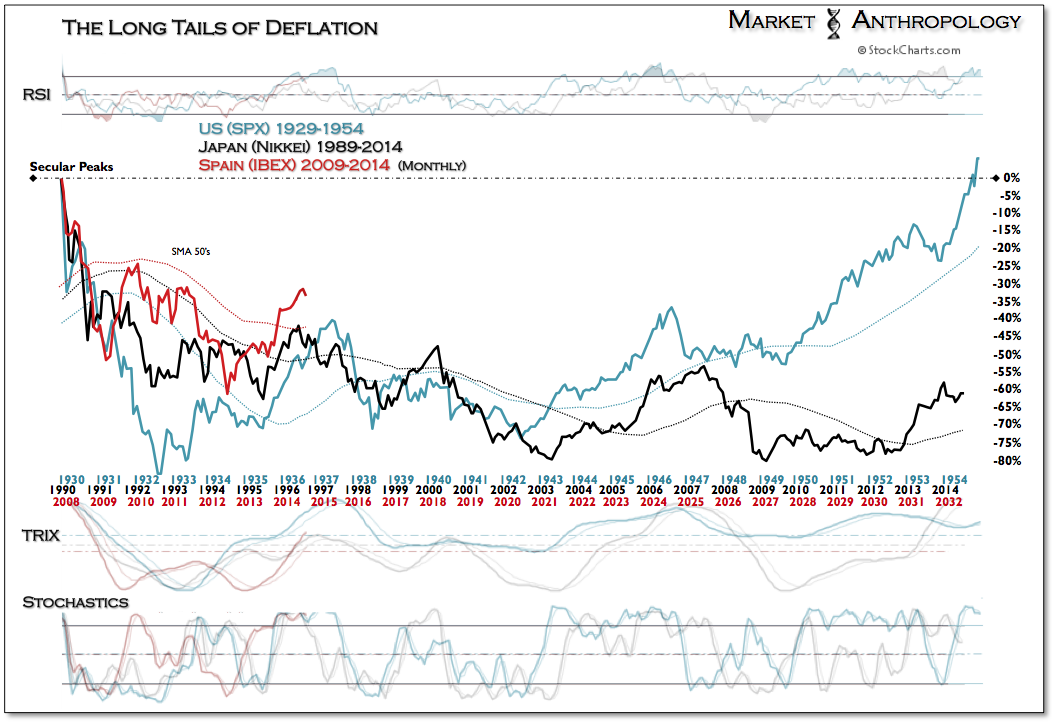 Speaking of deflation’s most recent prisoner, we continue to be encouraged by Japan’s leading indicator in overcoming the long standing conditions that have rejected the Nikkei on three previous occasions (1996, 2000 & 2007). 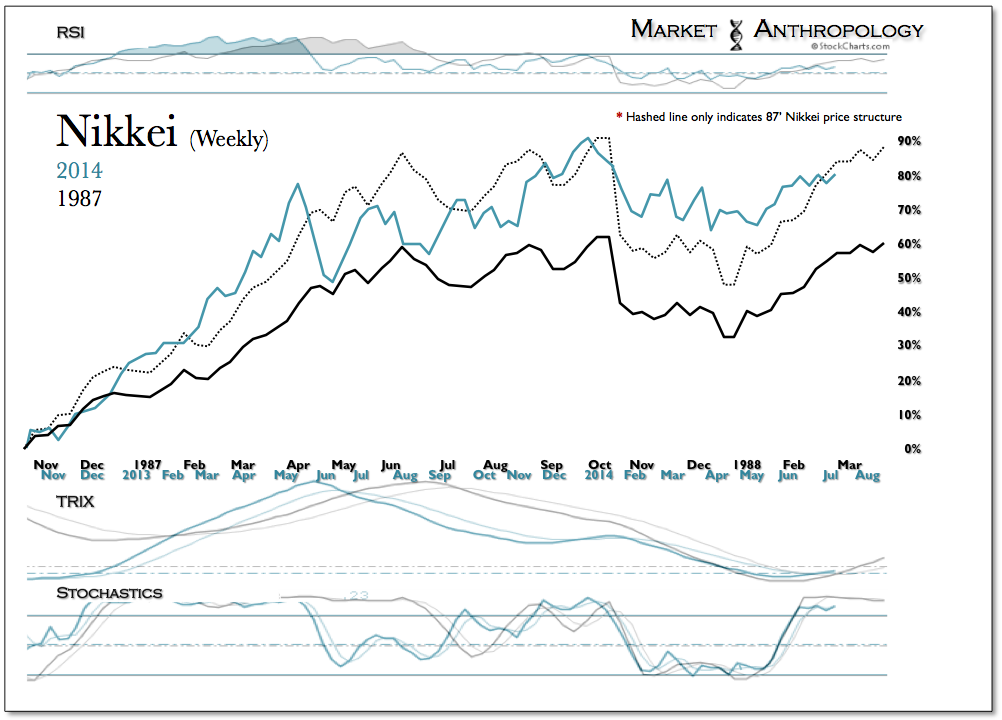 The 1987 roadmap that we have followed throughout the year in the Nikkei appears to be replicating the less mentioned, but more important – long-term outcome the momentum comparative implied. That market inertias would be quickly restored to the upside, once the retracement decline was completed.

As we mentioned in previous notes, this same pattern was replicated in the SPX as it navigated and was rejected by the Meridian in 1987, 1994 and in 2011. On each occasion, the low offered investors an excellent buying opportunity.

Similar to the patterned reversal in the SPX in the fall of 2011, investors may get one more chance to buy Japanese equities on sale before overcoming long-term resistance. Either way, on an intermediate-term horizon – the phoenix appears to be rising. 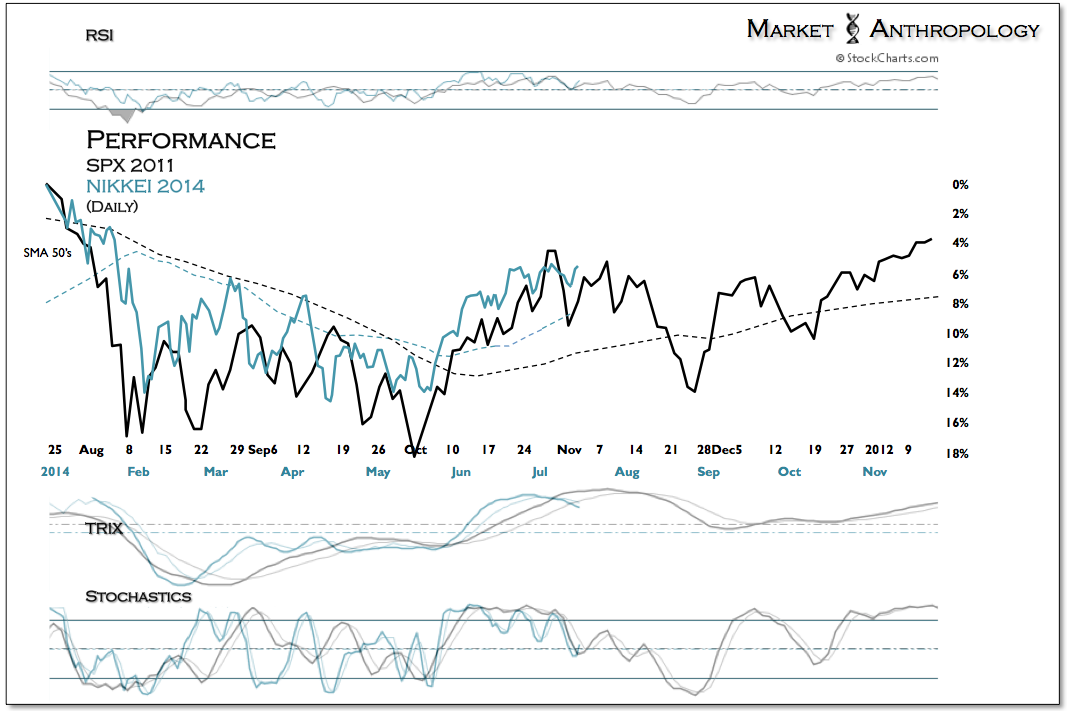