The World According to ZIRP

Over the rails we fell. 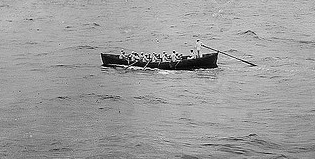 As if the labyrinth and tentacles of the financial crisis wasn’t already hard enough to handle, we suddenly found ourselves waist deep in lifeboats – navigating those treacherous seas, from well beyond the comforts of the visible horizon. With almost six years of floating now between us and that long December, the curvature in the markets – so relied on in navigating previous cycles, is more than difficult to discern these days.

The world is as flat as ZIRP.

What this has meant in the markets, is participants continue to have a tough time finding their bearings, when it comes to what the Fed will do next and where they are situated in the cycle. The expectation gap we noted over the past month is a direct effect of these esoteric market conditions that began with ZIRP – and which only were heightened as the Fed first pivoted to end quantitative easing in May 2013. With the Fed on deck this week wrapping up what we expect will be the final disposition of the taper, participants continue to speculate where and when the next policy move will be made.

“Yes, but when will they tighten?”, they ask.

To a large degree – it’s already happened. While the fed funds rate has not moved higher since finding ZIRP, the differentials in yields have already compensated from beyond the mystical plane – and in effect, tightened over the past two years. It began with the first mention of the taper in the spring of 2013 and should be completed with the final crumbs of QE3 dispensed this month. As shown below with the relative performance between 5 and 10-year yields, a massive move higher has discretely taken place over the past two years – despite the fed funds rate remaining pegged at ZIRP. We chose to highlight and contrast the relative performance between 5 and 10-year yields, as the shorter duration of the market has been disproportionally influenced by ZIRP and offers relatively no comparative value in our opinion. I.e. – the fallacy found today in waiting for an inverted yield curve to signal that a bear market approaches in the equity markets – or that a recession is near.

That said, naturally, yields along the shorter end of the market tend to either “outperform” or “underperform” longer term yields as the Fed moves between tightening or easing monetary policy. When the Fed tightens, shorter term yields outperform – and vice versa, as they ease. Historically speaking, the long-term relative performance range between 5 and 10-year yields was maintained until 2002 – and closely correlated with the disposition trend of the fed funds rate. 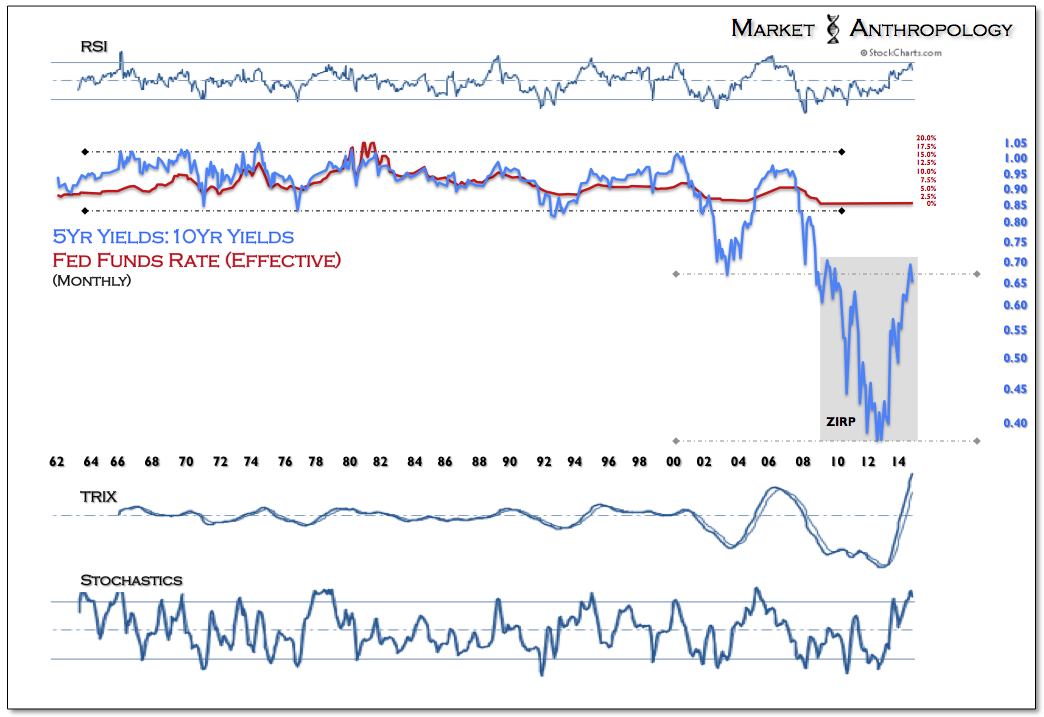 Following the attacks on September 11th, 2001 – the Fed continued to ease and the relative performance trend in yields broke below the previous cycle lows from the early 1990’s – eventually bringing the fed funds rate down to 1.0 percent by June 2003. Several months later, the downtrend was subsequently reversed, as the Fed removed the assurances that rates would remain low for a “considerable period” in January 2004. By the end of June of that year, the Fed had begun to gradually raise rates. Less than two years later – in February 2006, the relative performance differential between 5 and 10-year yields had reached its peak and foreshadowed the end of the rate tightening cycle later that June. 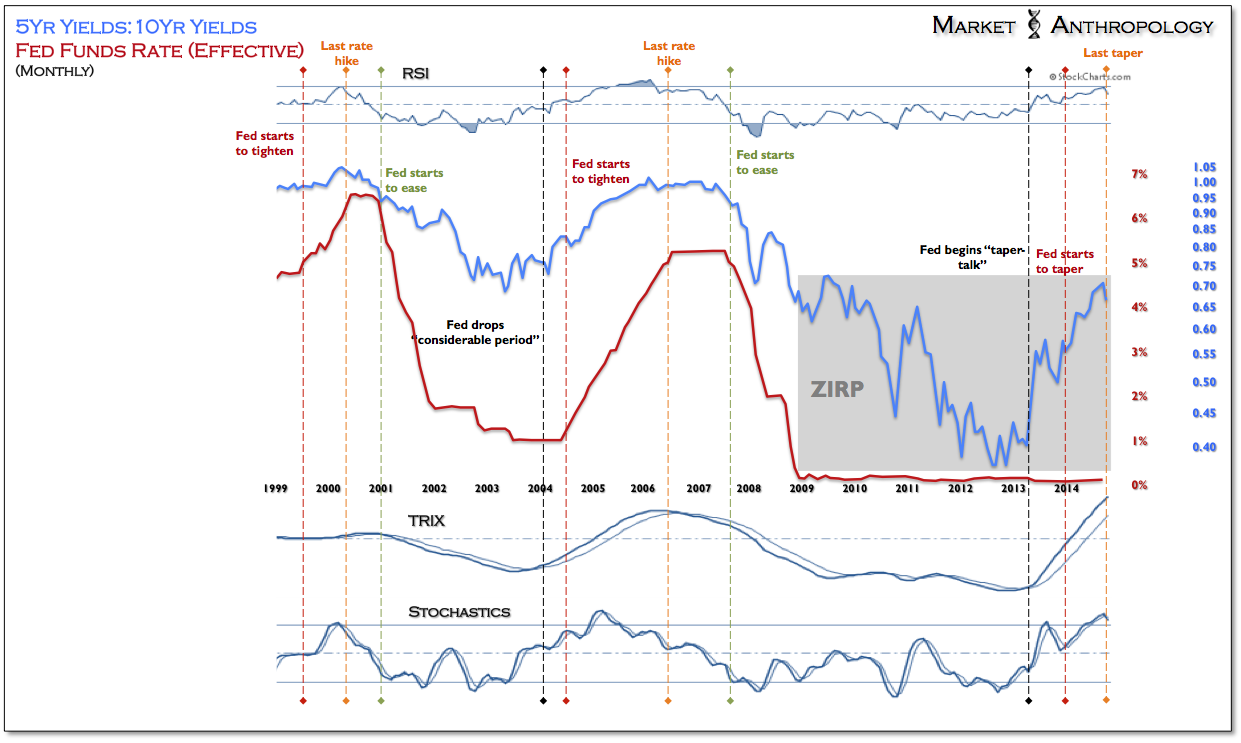 As the Fed ran out of road to maneuver in December 2008, further rounds of quantitative easing were enacted to push policy beyond where the visible horizon was seen. This in turn pushed the relative performance trend in yields well below the previous cycle lows in 2003.

From a comparative perspective to the current cycle, the signal to the markets from the Fed in January 2004 is analogous to the taper-talks that began in earnest in May 2013. Both prepared the markets for the eventual curtailment of accommodative policy and both ended the relative outperformance of long-term yields. Obviously, the most significant difference between then and now was participants knew tightening was taking place – as the fed funds rate clearly rose on the horizon.

Led by the move in 5-year yields, the historic relative performance rally has brought the trend back to levels directly preceding ZIRP – as well as the previous cycle lows from 2003. We can not overstate how large of a move was accomplished over the past two years and illustrates the murky conditions that participants continue to get mired in as calls for more conventional tightening by the Fed have been greatly misplaced this year. We would speculate the massive and violent nature of the moves in the Treasury market two weeks ago, represented the exhaustion of this significant uptrend and displayed how offsides participants have been positioned in the market this year.

Generally speaking, the massive move in 5-year yields is now following in the leading footsteps of the crest and breakdown in 10-year yields coming into this year. The relative symmetry in performance extremes (at both the top and bottom of the range) that we had pointed out last December in 10-year yields, is now replicating along the shorter end of the market at the top of its range. Despite expressing a significant lag to the move in 10-year yields – the takeaways are just the same: yields are low by historic standards – but remain stretched to a relative extreme.

Since the end of last December, we have referenced the chart below as indication that gold relative to long-term yields was expressing conditions indicative of significant lows in the past. And while those lows have not been undercut over the past year, gold has completed a round-trip back to testing those levels as the commodity markets have come under pressure from various macro crosswinds – and yields along the shorter end of the market have cut across the grain. 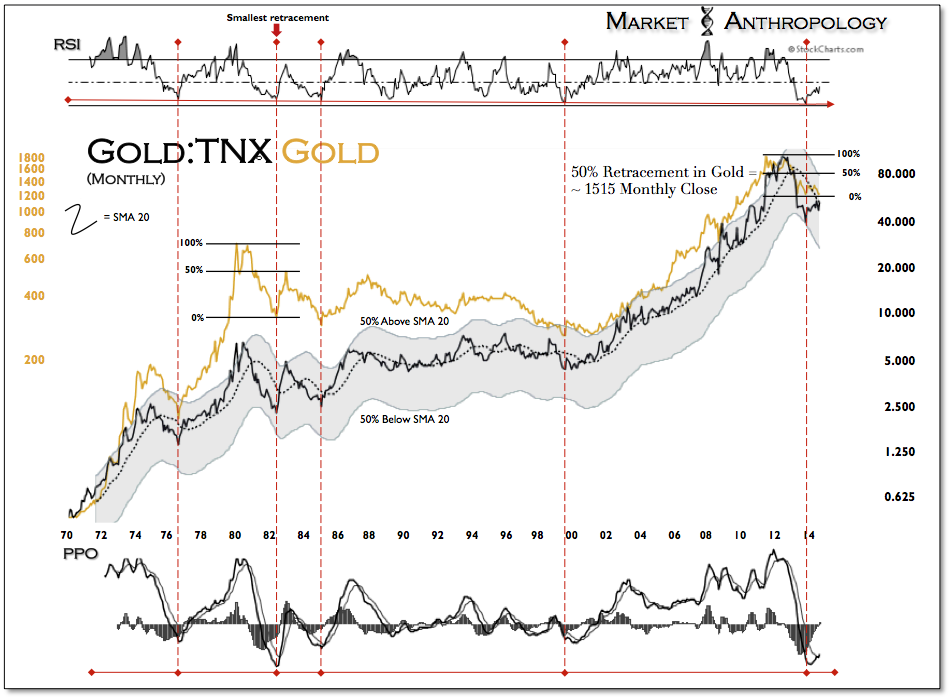 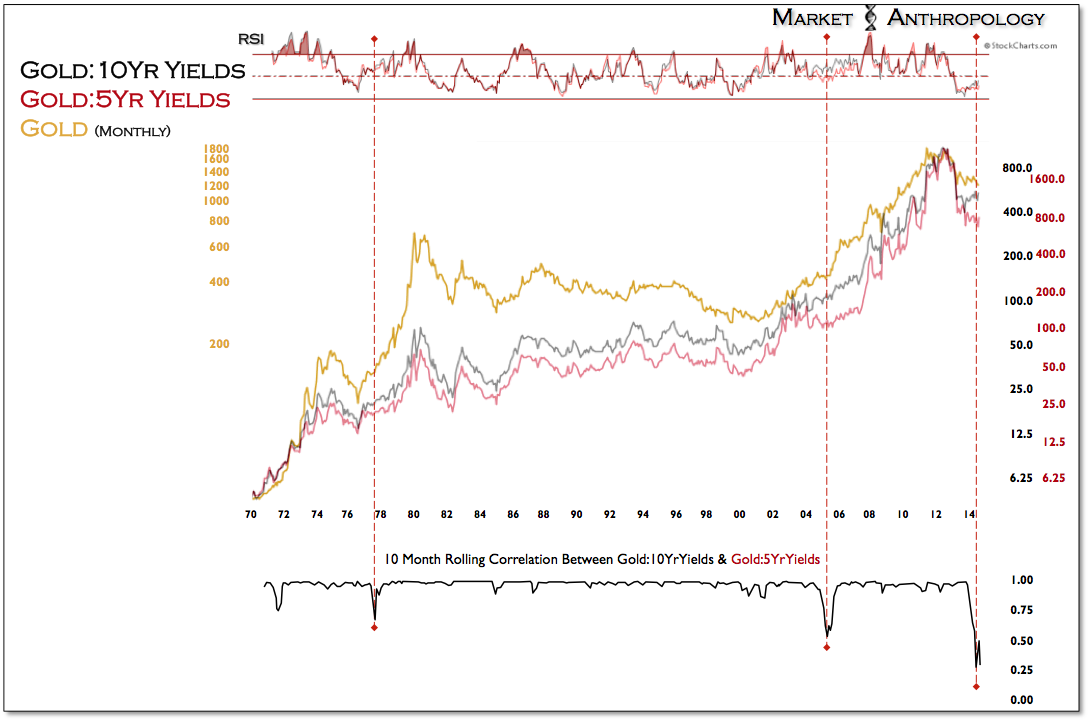 With bearish sentiment in gold continuing to build and the expectation gap towards further tightening recently slammed shut, we continue to like the long-term prospects of the yellow metal, as long-term yields should begin to outperform as further tightening is pushed back on the horizon.

The world is indeed as flat as ZIRP. 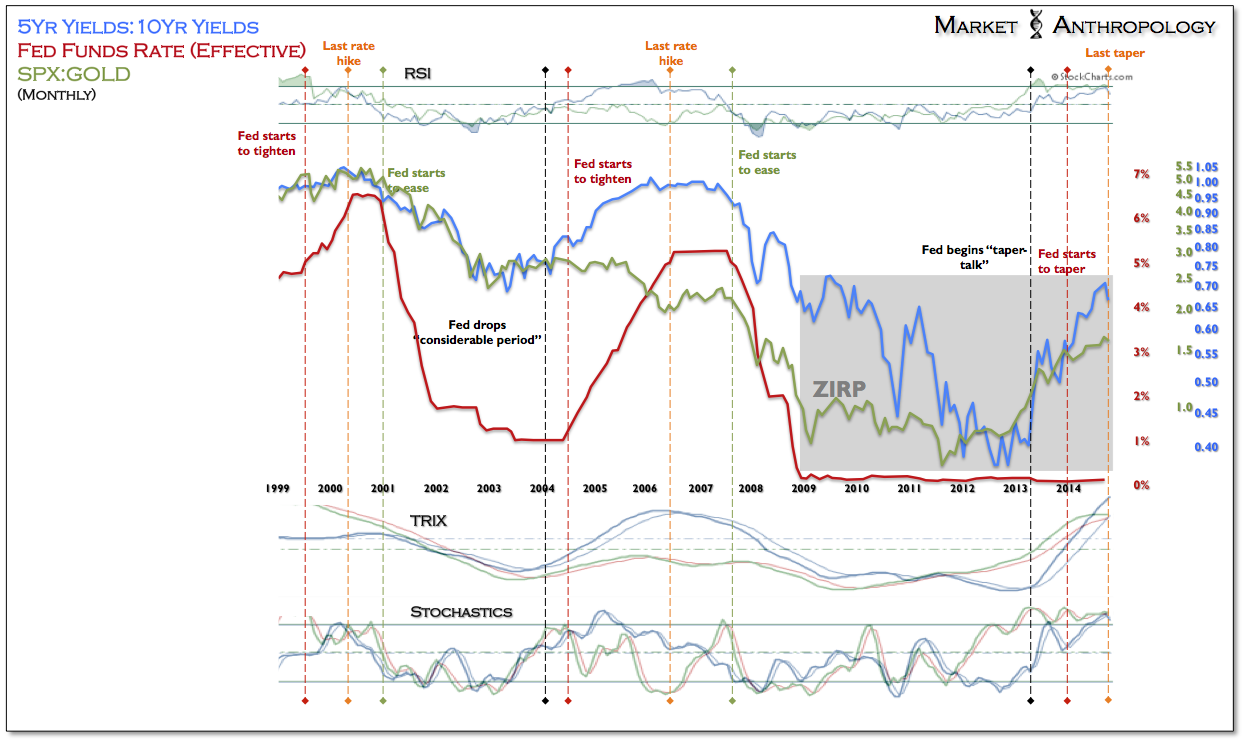