The Wizard of Odds for the US $ 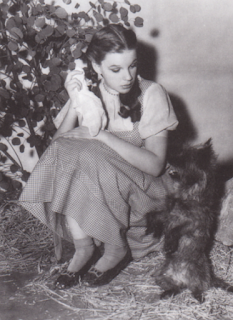 When it comes to currencies, the laws of Newtonian physics still appear to hold the greatest influence over participants long-term expectations. That is, the belief that a currency in motion will stay in motion, unless acted upon by an external force. For veteran currency traders of the 70’s, 80’s and 90’s, trends were often measured in years, rather than weeks and months, with the basic understanding that the fundamental forces behind the trend were not ephemeral conditions – but long lasting, reinforcing and with great inertias to overcome.

Today, these same sentiments have been resurrected in participants expectations towards the US dollar, which from a range of benchmarks and weightings has been trending higher from a cycle low over the past 4 (trade weighted – broad index) to 7 years (dollar index – USDX). That said, when you compare and contrast the bull markets of the past to the current dollar rally, it just doesn’t quite measure up for some, who nostalgically harken back to those markets of old, of where yields were several hundred basis points higher, the Fed comfortably drove policy on both sides of the road and the Maestro was still, well – the Maestro.

-Toto, I’ve a feeling we’re not in Kansas anymore.

From our perspective – and represented by the Fed’s arduous task of administrating policy from ZIRP and within the trough of the long-term yield cycle, the conditions in the economy that were reflected in the markets of the 70’s, 80’s and 90’s – are not remotely similar with today or have the potential reach and trend capacity that was fundamentally set in motion and sustained by the rise and fall in yields, from their secular icarus heights of the early 1980’s. 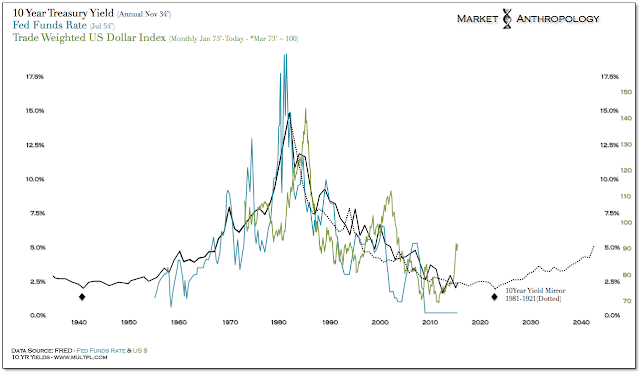 Nevertheless, the availability heuristic afforded by the two previous bull markets in the dollar, have become the benchmarks for pundits and analysts to measure up against today. Just this week we saw a piece from BlackRock contemplating that the move in the dollar may just be getting started.

“Since the 1970s when the Bretton Woods fixed-currency regime ended and currencies began floating, a typical dollar rally has lasted roughly six to seven years. The increase in the dollar we’ve seen so far this year is muted compared with the strong dollar episodes of the early 1980s and late 1990s. The dollar’s recent rally may just be getting started.” – Why the Dollar’s Strength Can Continue – BlackRock Blog

Although anythings possible – and admittedly the bulls continue to hold the fort and battle for now, we feel it would behoove such lofty expectations to approach the dollar with the aforementioned long-term intermarket cycles in mind. Moreover, from a performance point-of-view, the magnitude and pace of gains over the past year is in fact rare and more representative of culminating blowoff extremes – rather than the early headwaters of a longer trend. 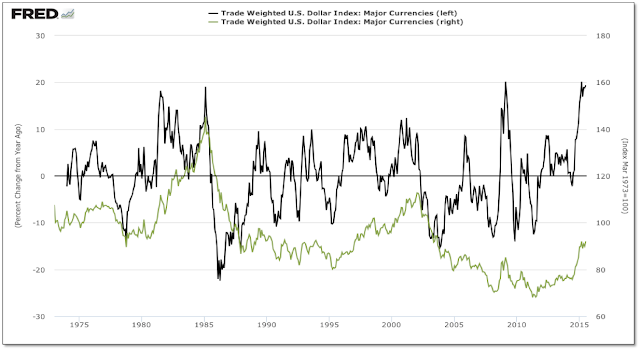 This impression is also depicted in the long-term chart of the US dollar index, which we’ve speculated was pushed to a relative performance extreme in March, arguably last witnessed at its secular peak in February 1985. Although the dollar appears to be testing those highs this summer, we maintain our expectations that similar to the relative performance extreme in longer-term yields going into 2014, momentum in the dollar will once again roll-over and ultimately test the bottom of its long-term range, as the limits of the virtuous disinflationary trend is confined by the broader structure of the long-term yield cycle. 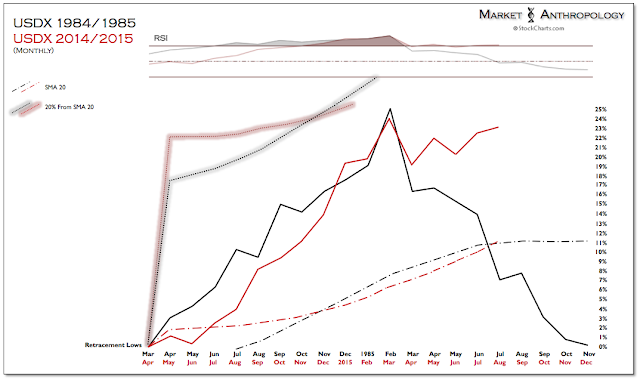 The Re-test
As much as the media has presented the fundamental supply side on oil over the past year, you would be hard pressed to read as much on its inherent denominating calculus from the currency markets that appears far more consequential to the price of oil over the near-term.

Notwithstanding the actions in Japan that only reinforced conditions in the currency and commodity markets over the past three years; our general belief is the two largest reserve currencies in the world have been wagged by the divergent policy paths between the US and Europe, which contributed to the strong disinflationary tailwind that initially took hold in 2011 when the ECB raised its refinancing rate twice to 1.5 percent – while the US maintained a zero interest rate policy, subsequently buttressed by additional rounds of quantitative easing. With the ECB finally finding religion and cutting rates below the US for the first time in a decade – as well as pulling up to the alter of QE in March, the torque in the currency markets from the differentials in policy paths should continue to back off. 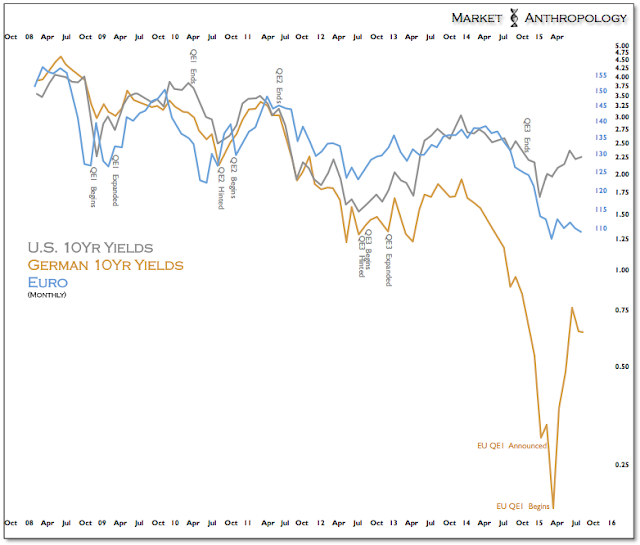 And while a retest of a markets lows can be a nerve-racking experience to buy into, we still like oil’s long-term prospects – especially relative to the US equity markets, where we expect the euro and inflation expectations to rise through the balance of year as the Fed stumbles to the starting gate, the ECB maintains course and Japan pulls back from further suppressing the yen. 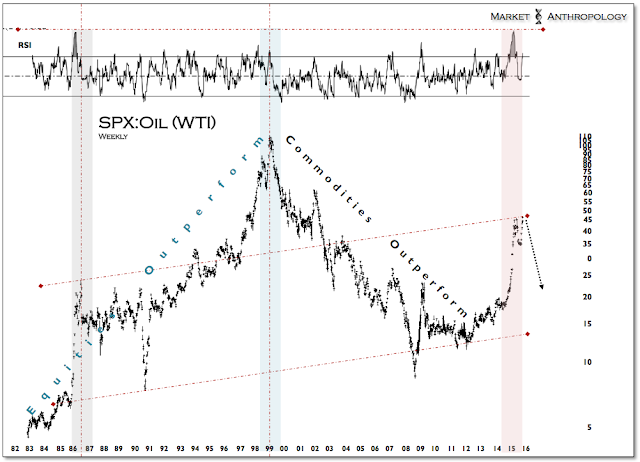 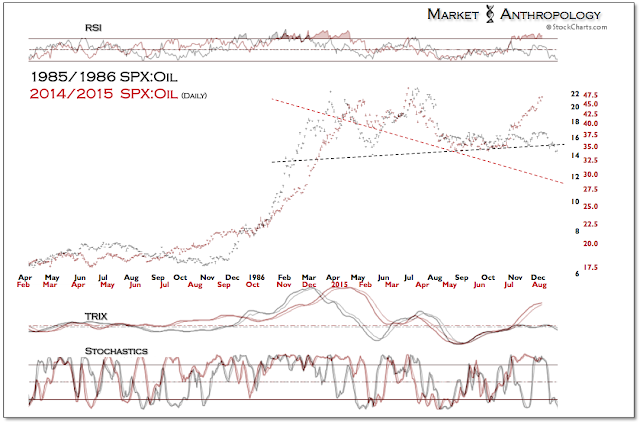 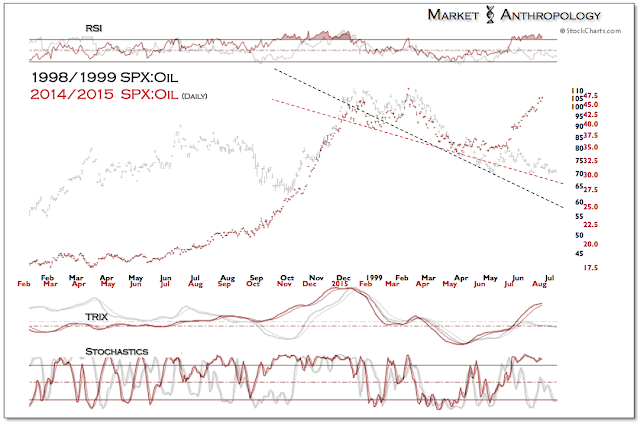 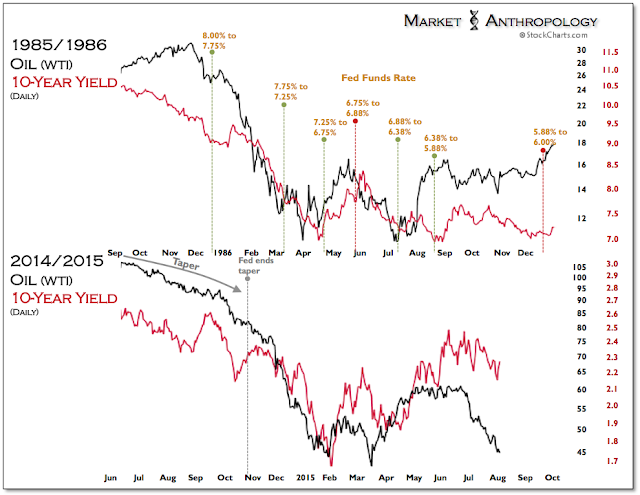 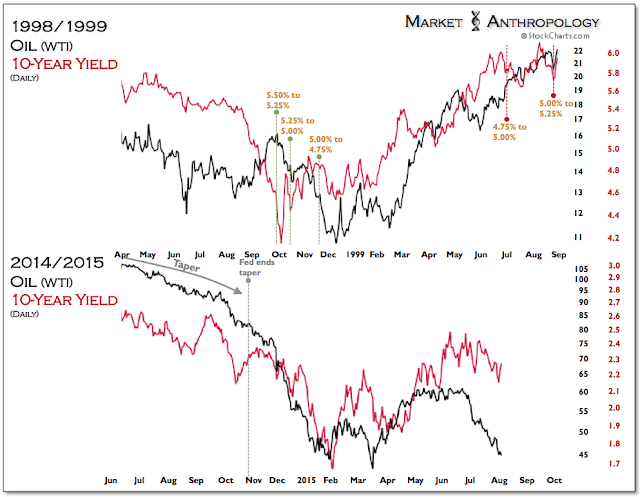 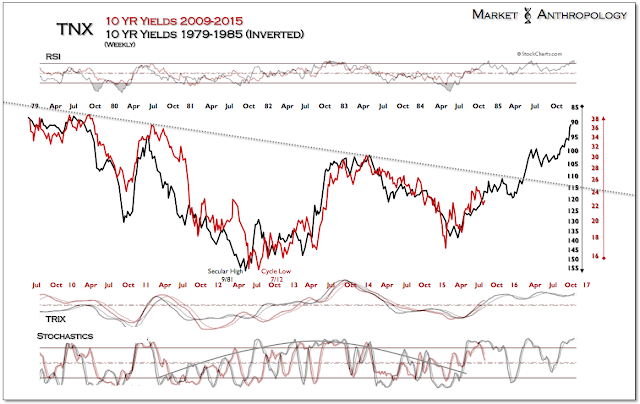 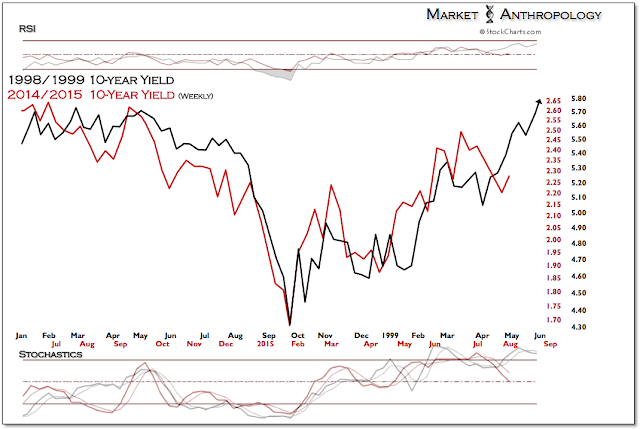 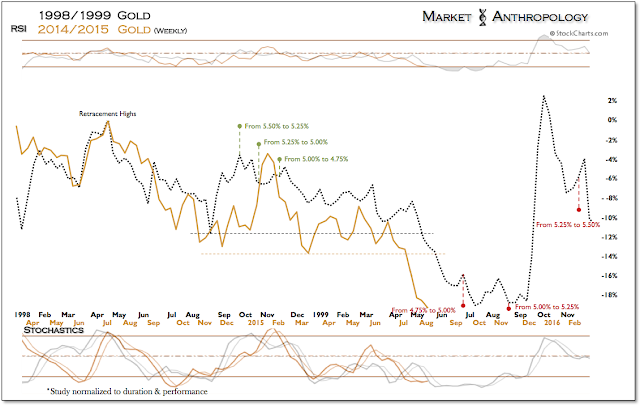