the Tail of the Euro

Now that I’ve alienated the readership of economists worldwide (previous piece – nothing personal, they are typically some of the nicest market folk in everyday life) – why don’t I embrace the words of one of their most preeminent brethren.
Milton Friedman once famously theorized that he did not believe the Euro would survive it’s first crisis.

“The euro is going to be a big source of problems, not a source of help. The euro has no precedent. To the best of my knowledge, there has never been a monetary union, putting out a fiat currency, composed of independent states.” Milton Freidman 2006

When the commodity and financial markets blew-up in 2008, that crisis arrived at Europe’s doorstep almost overnight. I saved the following article as a reference during that time period because it summed up the gauntlet of moving parts that was downhill of the commodity bust; and because a full-blown currency crisis never materialized. The one thing with reading and interpreting the macro tea leaves is that in many cases (as alluded to in the difference between a trader’s and a economist perspective) it will eventually be realized.

“The latest data from the Bank for International Settlements shows that Western European banks hold almost all the exposure to the emerging market bubble, now busting with spectacular effect.

They account for three-quarters of the total $4.7 trillion £2.96 trillion) in cross-border bank loans to Eastern Europe, Latin America and emerging Asia extended during the global credit boom – a sum that vastly exceeds the scale of both the US sub-prime and Alt-A debacles.” – October 2008, Europe on the brink of a currency crisis meltdown – Telegraph

In essence, Europe holds the majority of debt from the commodity rich emergent markets that were in free fall, due to the collapse in the CRB Index in 2008. The subsequent reflation trade (however misplaced by those seeking risk and errant causation) headed off what would have surely been a serious impediment to Euro stabilization. If and when the commodity sector actually breaks down for the cycle, Europe will not only have to deal with their respective sovereign debt issues, but the sleeping minefield of subprimesque loans to those emerging markets so heavily dependent upon bubblicious commodity prices.
If you think Bernanke has it rough, which is certainly an understatement in of itself – Trichet and the ECB has the nearly impossible task of juggling the combustibles with one hand tied behind their backs. As we all are aware of, the European Central Bank does not have the dual mandate that allows Bernanke the considerable latitude, leverage and creativities under the supposed guises of growth.  And while the US did quite a bit of the heavy lifting (both discretely and not so discretely), the ECB still has to deal with the 12 disparate growth and debt tracks, a sovereign wealth crisis every other month and a sprinkle of good old fashion schadenfreude.
So clearly the Euro is currently priced for this much tail risk – right? 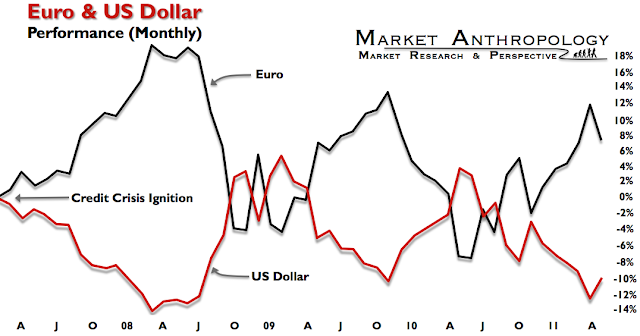