the next Big Trade

At some point in the near future, the next BIG trade will likely come from a leveraged short position of the precious metals sector. With proper execution, it could easily exceed the record Paulson short of 2008. Unlike the Paulson trade, where he actually had to create the trading vehicle to perform his thesis of thinking – there’s a line around the block waiting for someone to take the other side of this market at a moments notice.
Generally speaking, the criteria for an asset bubble in Gold and Silver have been met:
This trade is no different than Paulson’s short on the housing sector – or Buffet’s short on the dollar. They did their due diligence – recognized an asset class that was so historically stretched in relation to the mean and waited for their ship to come in. It is most similar to the Paulson trade – because everyone believed that the housing market was infallible to the kind of declines Paulson recognized as inevitable.
Today, everyone believes the inverse relationship to be true. That the financial system is broken, that the Fed has lost control and that Islamic Jihadists or a Middle Eastern state(s) will bring us to our knees. While there is some truthiness in shades of that – it’s more hyperbole than reality.
It was the confluence of the Tech Bubble bursting in 2000, the events of 9/11 and a commodity sector that was overdue for outperformance – that gave birth to this bubble. As with every bubble – it starts with a legitimate thesis for outperformance – and then runs away with emotion. It is only after we reach the dizzying heights of the sun that we realize the danger we so confidently embraced.
That moment seems imminent.


The Unified Field Theory – Where Reflexivity Meets Equilibrium
Here are a few charts of different asset classes with my Meridian Theory applied through their respective trends. Each chart utilized the same reference dates as crosses to establish the meridians.


In essence, the shading represents time periods where the markets are at a disequilibrium with the trend. In my unified theory (tongue in cheek once more), the meridian represents an equilibrium, which could be construed as the overlap between Soros’s theory of reflexivity and traditional equilibrium thought. This makes rational sense, since it has typically represented where the market has either found equilibrium – or lost it altogether. In 1987, it represented the top of the trading range out of the historically depressed markets of the 1970’s. The gains were steep, the programs misfired, mass psychology took over and the rest is history. After the 87′ crash, the market eventually made its way back to equilibrium and crossed the threshold right before Greenspan invoked the self fulfilling prophecy that was Irrational Exuberance. In 2002 and 2003, the market found its balance at the meridian and started its reflationary ascent to the 2007 highs. In 2008, it represented the threshold where the markets lost their footings – due to the financial crisis, and crashed. Today, with the exception of the commodity and gold sectors, these markets have worked their way back to equilibrium – as represented on the charts. Click to enlarge the charts. 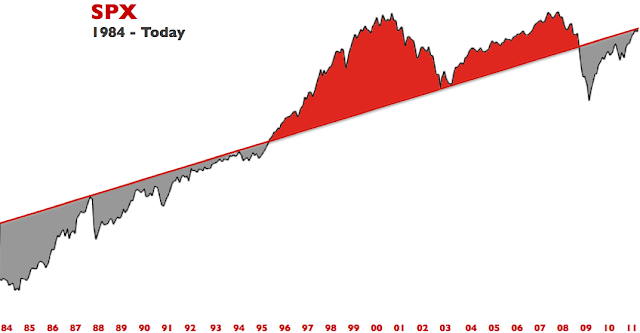 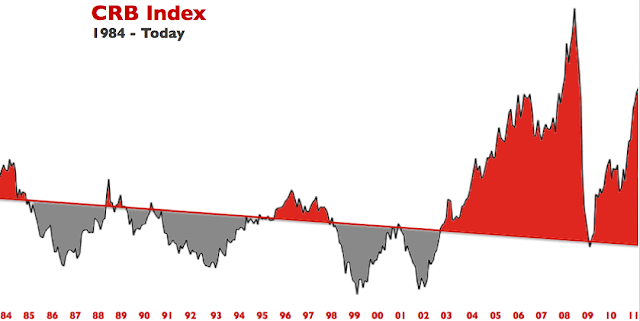 Assuming all things are relative, and the kinetic intra-market/asset class relationships still apply – you can see why George Soros believes that the gold market is the largest asset bubble of the day, and by extension the commodity complex as well.

These charts illustrate that thought rather profoundly. It would be an excellent time for him to put his money where his theory applies and dwarf the gains he reaped for breaking the British Pound. Ironically, the catalyst this time may be realized when the financial system and the global economy are found to be in better shape than most suspect, and that once the stimulus is slowly removed… surprise, surprise – life goes on and the markets function.

With that said, a dislocation of this magnitude would likely have negative impacts to the equity markets in the short to intermediate time frames. So stay frosty. More to come in this line of thinking.
at 12:29 AM