The Markets “Graduate” to Commodities 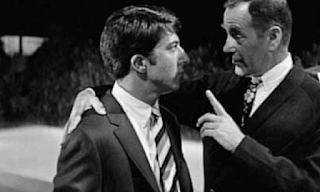 The retracement move in gold gathered downside momentum Wednesday, falling in morning trading by more than 2.5 percent and below 1220 for the first time in four weeks. With gold looking to test support from its February breakout, our near-term target of around 1190 appears in play. All things considered, we remain open minded towards the timeframe and ultimate magnitude of the retracement and would generally expect a sharper and more extreme move down (as our yen comparative suggested) to complete quicker. A close below 1190 and we would be looking for another large capitulation reversal over the immediate sessions.

From an intermarket perspective, we will continue to follow the dollar relative to gold as an indication that the retracement move has run its course – or if our longer-term expectations towards gold and commodities in general needs to shift.

Although we suspect a majority (~70%) of the downside in gold was accomplished through this morning’s early session – estimates of the comparatives that we incorporate for spot prices, the miners and the dollar suggests the retracement move and consolidation could extend through May. As always, these comparatives are referenced as guides within a broader research outlook and will yield bias to current market conditions or seek to adjust when deemed necessary.

Sizing up the moves in gold relative to the US equity markets over the past year, we’d contend that gold has not only led the broader reflationary trend, but pivots in the equity markets as well.
Click to enlarge all images 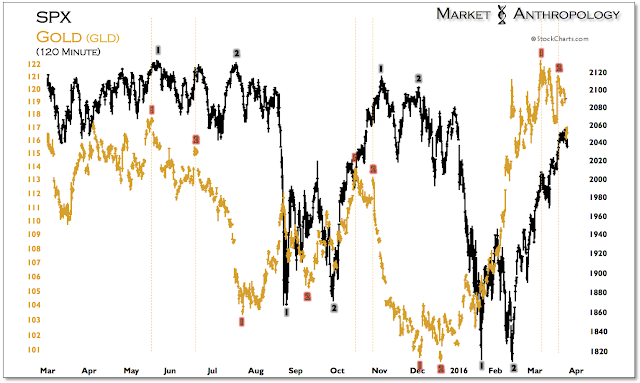 We’ve speculated, however, that a principal difference in market structure to-date is as commodities have put in a cyclical low with inflation expectations; US equities are carving out a cyclical peak. Meaning, although stocks may be loosely following gold’s leading pivots, as gold makes higher highs – equities would make lower highs. This dovetails into our work with the miners and the financials over the past several months. 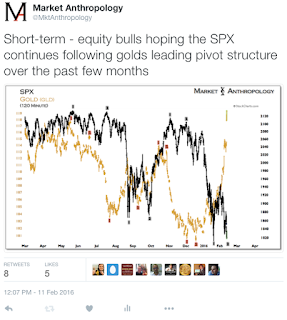 That said, we certainly did not expect the retracement rally in stocks to extend nearly as high as it has, despite noting in the second week of February that the bulls might find support from gold’s leading move.

Hindsight 20/20, the upside in the S&P 500 appears limited even as breadth has markedly improved – which we’d argue is primarily due to rising inflation expectations and the broadening performance in the commodity markets, rather than an underlying improvement towards equities overall. And while the economy today may benefit from a boost in inflation expectations (see Here), the corresponding cyclical pivots in the commodity and equity markets harkens back to the late 1940’s when the Fed and Treasury ended their active support after undertaking similar large scale asset purchase programs.

Longer-term, we continue to defer to the broader cyclical patterns in CAPE and yields that has pointed towards a revaluation in equities lower and a prolonged market environment of historically low yields – akin to the long normalization in the markets that took place in the late 1940’s following the Fed and Treasury’s extraordinary support after the Great Depression and World War II.

Although some participants and economists largely ignore this period – precisely because they perceive it as so unlike any era before; when normalized through the broad context of the long-term yield cycle we would argue it is the closest market corollary. Historically speaking, we find that the long-term yield cycle distills and weighs most variables as it ultimately represents expectations on the cost and demand of capital. Considering our comparative thoughts on yields (see Here), the 1940’s holds relevance with today.

Moreover, the parallels extend in relation to equity market cycles, valuations, debt/GDP, monetary policy – and hence we believe share similar underlying market psychologies with today. Although the financial crisis this time around led to the significant expansion of the Fed’s balance sheet, from a capital expenditure perspective the ongoing War on Terror – since September 11, 2011, is the second most costly of any military engagement in US history (inflation adjusted) behind World War II (see Here).

Nevertheless, while economists still dispute the merits or policy mistakes from the 1940’s, a few key market takeaways from this period that we believe still hold practical insights with today are:
Our general interpretation of this period – which we find resonates with today, is it delineated the final phase of transition between the long-term yield and growth cycles and where the influence and intervention of monetary policy reached its zenith within the market.

Following the conspicuous support of the financial markets through 1946, participants still held strong recency biases to the previous declines of the Great Depression. When the positive effects of policy support disappeared and the equity market cycle turned down, participants did not trust the market or expect inflation to rise as precipitously as it did from the trough going into 1947 and 1948. They by and large expected a downturn commensurate with the two previous severe cyclical declines and another wave of deflation.

As we noted in the past, Milton Friedman and Anna Schwartz’s had the following observations of this period in – A Monetary History of the United States.
“Despite the extent to which the public and government officials were exercised about inflation, the public acted from 1946 to 1948 as if it expected deflation.”

“An important piece of evidence in support of this view is the harbinger of yields on common stocks by comparison with bond yields. A shift in widely-held expectations toward a belief that prices are destined to rise more rapidly will tend to produce a jail in stock yields relative to bond yields because of the hedge which stocks provide against inflation. That was precisely what happened from 1950 to 1951 and again from 1955 to 1957. A shift in widely-held expectations toward a belief that prices are destined to fall instead of rise or to fall more sharply will tend to have the opposite effect – which is precisely what happened from 1946 to 1948.” – Milton Friedman and Anna Schwartz, A Monetary History of the United States, 1963
In hindsight, what participants did experience was a revaluation in equities, as markets slowly normalized from a lengthy period of extraordinary support and intervention. Although the initial correction was significant in 1946 (~26 percent), the economy did not fall into the greater fear of another depression, but muddled through and was range-bound over the next three years as the economy traversed the yield trough to its next major growth cycle and as markets struggled with bouts of inflation and a less proactive and accommodative policy posture.
_______________________________

As a postscript towards our perspective on CAPE and the long-term yield cycle, we offer the following observations:

Overall, we’ve viewed the Fed’s policy actions this time around helping to push equities up to a valuation ceiling in CAPE around the previous peak in 2007. Although we believe from a proportional understanding of the relationship between the long-term yield cycle and CAPE it doesn’t make much sense to compare absolute valuations between periods; from a cyclical and pattern perspective, the mid to late 1940’s offers the closest corollary – as valuations ultimately were capped by a cyclical move higher in inflation as markets and the economy began to normalize from extraordinary policy support.

Similar to how the Fed and Treasury’s actions in the first half of the 1940’s broadly smoothed the transition in the economy from the Great Depression and World War II, we expect the US to muddle through this next phase as real yields in the long-term cycle move lower one last time. And what’s the most benevolent asset class to speculate and invest in with declining real yields? With semantic liberty – and as Mr. McQuire in the Graduate points out:
Mr. McGuire: I want to say one word to you. Just one word.
Benjamin: Yes, sir.
Mr. McGuire: Are you listening?
Benjamin: Yes, I am.
Mr. McGuire: Commodities.
Benjamin: Exactly how do you mean?
Mr. McGuire: There’s a great future in commodities. Think about it. Will you think about it? 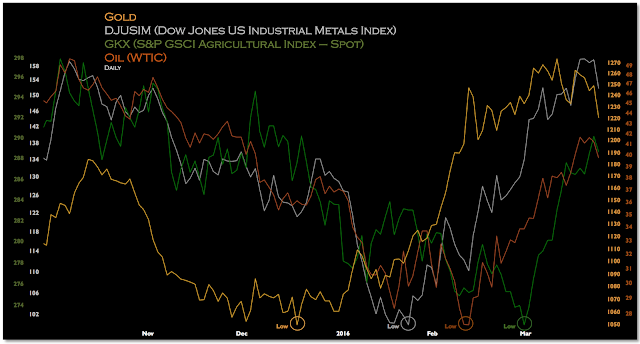 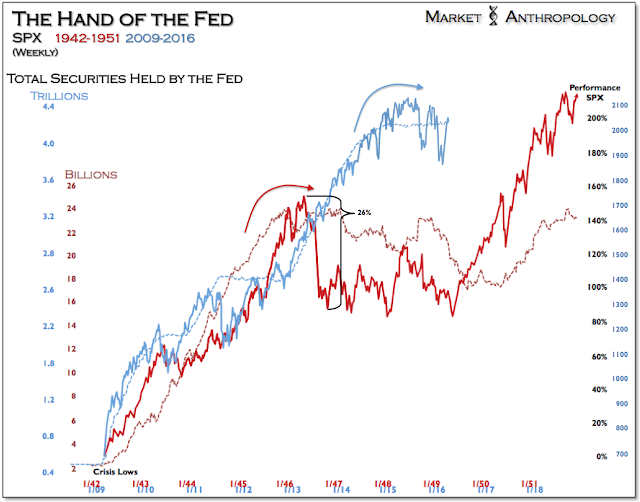 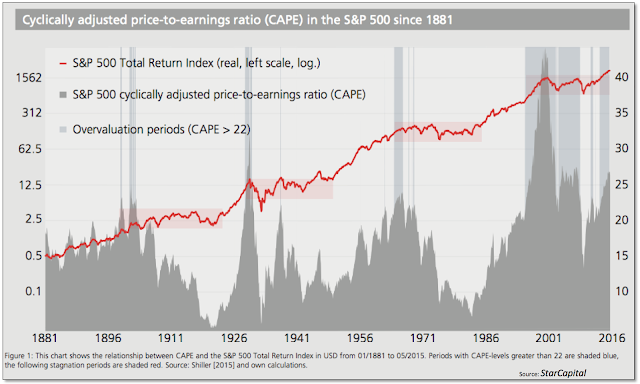 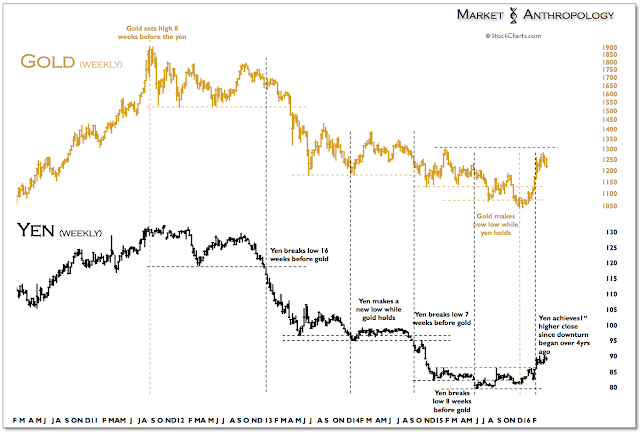 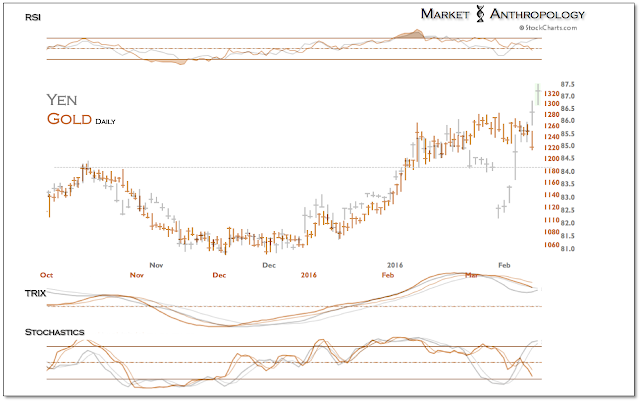 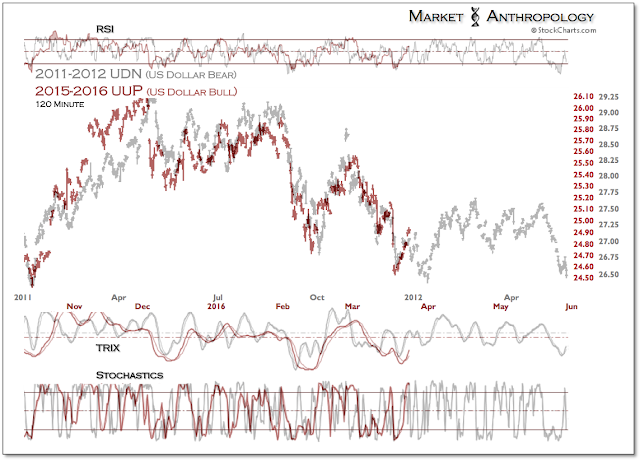 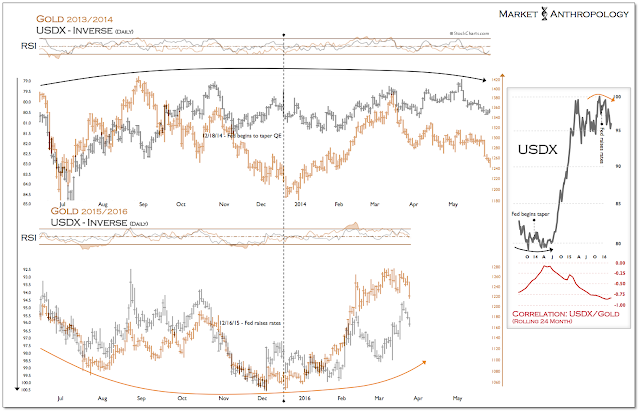 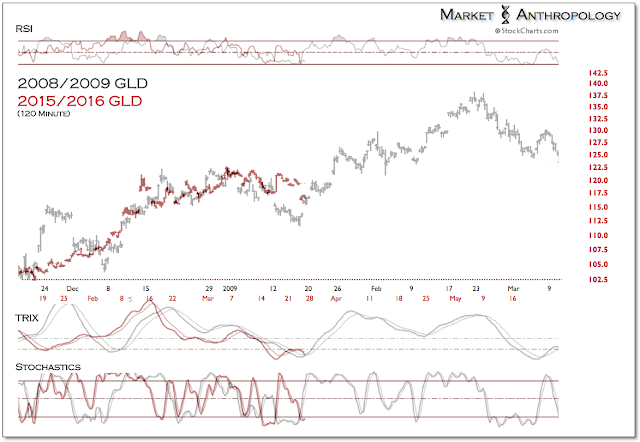 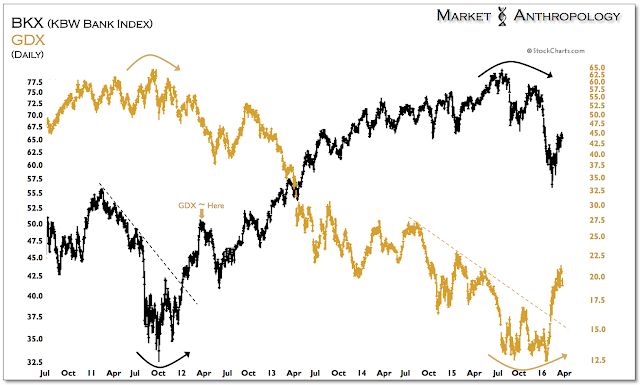 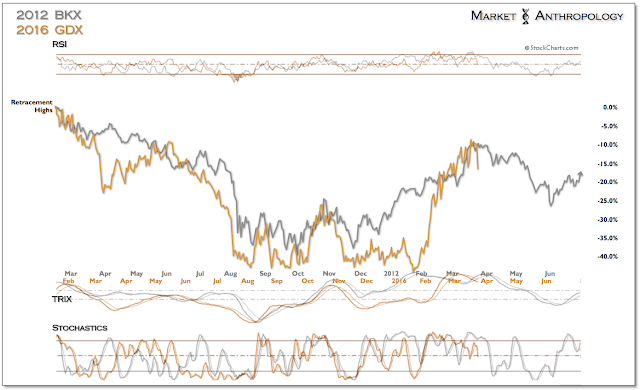