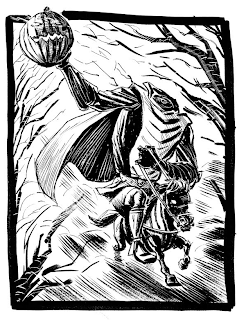 I try to never forget that Risk is the markets first, middle and last names. And as we approach its most benevolent season, the risk of underperforming the indices becomes just another emotion that can either magnify the underlying bid – or remove it all together. Two examples of this extreme happens to be two of the market environments that the current tape has exhibited characteristics of throughout the year – namely, 1998 and 2008. In 1998, many hedge fund managers went from being down 15 to 20 percent going into October – to having one of their best years on record. In 2008, managers just wanted to survive the financial crisis after unknowingly finding themselves in mortal danger after the crash. Like any trader or fund that is competing against the benchmarks and each other, the dangerous specter of underperformance rides tall and headless in the fourth quarter.
In terms of handicapping where the equity markets may trade next, I am caught between a rock and a hard place – with regards to my current expectations that the equity markets have failed to cleanse themselves of the momentum characteristics that personify a long-term bottom. To a large degree, the markets have followed the 1998 script that I have been utilizing for the better part of the year, very closely when viewed through the scales of seasonality, the measurements of the respective declines, and the representations in volatility and the gold/silver ratio. When appraising the markets through these narrowed metrics, you could make the argument that like 1998 – the market could continue to vault over the now heightened wall of worry into 2012 as money managers scramble to catch a throttling market.
As someone who studies market history quite frequently, I realize that anything is possible, especially when time frames are compressed and the herd is corralled by the fourth quarter – however, I believe the market will audible from a 1998 trajectory, namely due to the dissonant policy response from Europe that has failed to overlap with the markets own internal rhythms and exogenous frictions. I have spoken about these concerns in my most recent notes:
In addressing the immediate concerns out of Europe this week, Robert Sinn has a good synopsis that neatly distilled the impacts to the system – if you choose to read between the lines:

Last week equity markets rallied on the combination of euphoria that the possibility of a European style Lehman was taken off the table…However, nothing has changed in the sense that Europe is still undergoing a painful private/public sector debt de-leveraging cycle and still faces years of harsh austerity measures. In case you didn’t know, the combination of fiscal austerity and financial sector de-leveraging certainly does not lead to economic growth. In summary, it’s time to curb your enthusiasm and prepare yourselves to be disappointed yet again by European leaders. After all, they are not superhuman and cannot create money out of thin air – only the ECB could do such a thing and they appear to be wholly unwilling to even entertain such an idea. As Peter Boockvar so succinctly explained it last week: Europe will either have to write down the debt, pay it off, or inflate it away. ECB will not allow it to be inflated away, they don’t have money to pay if off, so the only alternative is to write it down. – Here’s What’s Going To Happen

Similar to the move out of the lows found in June, I believe we are currently going through a scene change that is being masked by the ephemeral highs of the recent bounce. Once the lights of reality come back on in Europe, the markets will likely travel back through the range as they come to terms with what the tangible limits of the crisis response means to the markets – not the rumors the markets have acted on.
As someone who regularly resources previous market environments for color as to where we may be headed next, the analogy to 2008 was almost too obvious to expect lightening to strike twice – this close to the scar. But alas, the satellite images (e.g charts) and echoed – albeit diverging, policy responses from our respective monetary handlers, have served as a lucid reminder that we are still within the confines of the credit crisis itself and gripped by those deflationary tentacles that first appeared in 2008.
As anyone who has been reading my notes since April knows, It was my standing belief that the dollar was on the cusp of a long term secular low – quite similar to 1980. The ramifications of this sea change are significant to all corners of the markets, but in the immediate sense, the recent dollar weakness should find support just around the corner at 76. This is, not coincidentally, a 61.8% retracement level from the late August lows. In light of this immediate support, prudent investors and traders should look to hedge or lighten their long exposures over the next several sessions.
To orient myself in the next chapter, I have included several charts from 2008 that contrast what a strengthening move in the dollar could mean to other asset classes and metric scales while navigating the approaching weakness. Similar to today, the dollar retraced 61.8% of the move in September of 2008 before resuming the uptrend. One part of the 1998 analog that appears to be diverging first with respect to price structure – is the gold/silver ratio. As exhibited in the chart below, the ratio appears to be plateauing, instead of falling sharply as it did in the October 1998 low. At this point, the strong rally in the dollar and the stepped appreciation of the ratio is more reminiscent of 2008 than 1998.
The guideposts established in 1998 have served me very well as a trader up to this point – but I now must bid it adieu as the scene changes. 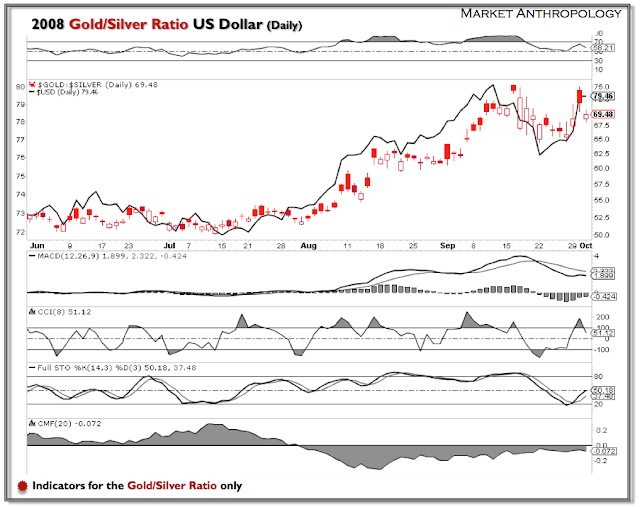 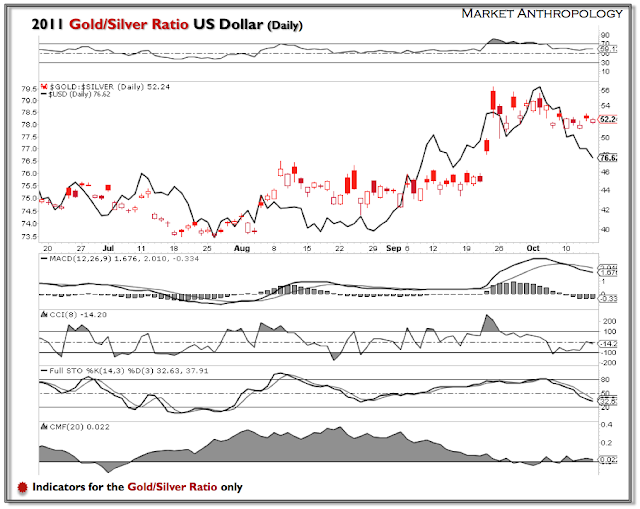 The recent declines in the bond market is closely following the 2008 tape. 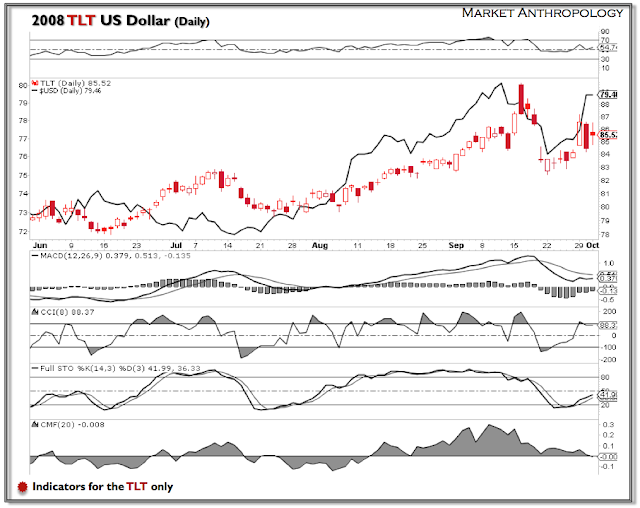 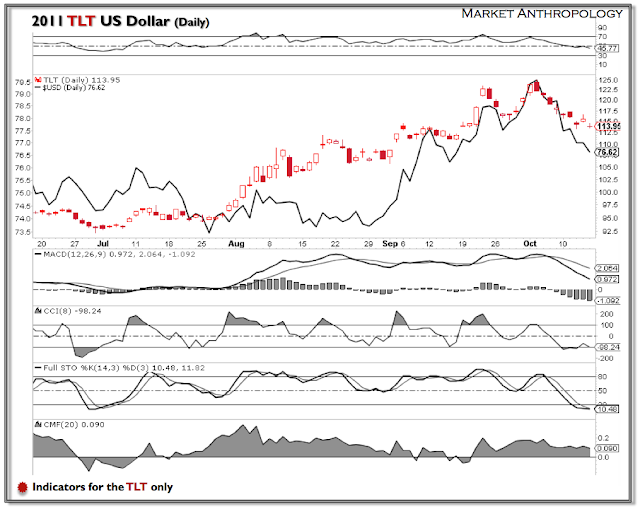 The silver market was the first indicator in May (see Here) that exhibited a close resemblance to 2008. 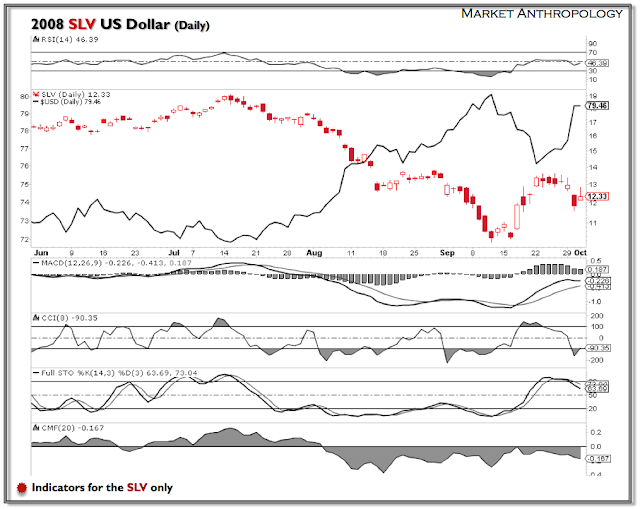 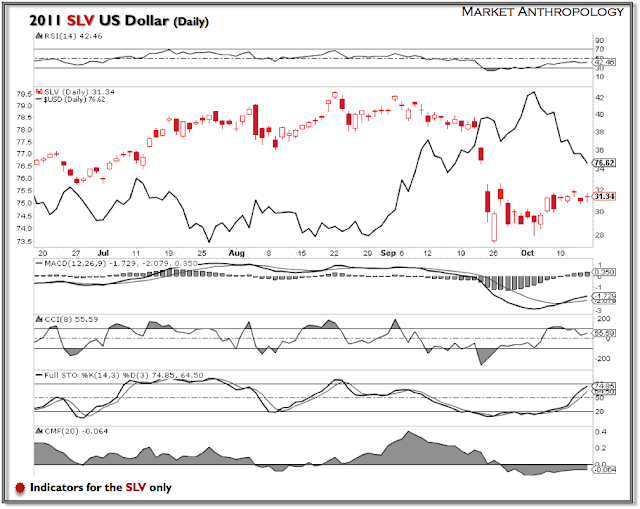 Where the market is dissimilar to 2008 is while contrasted with volatility. In 2008, the market was caught off guard (funny – seems unbelievable in hindsight…) with the systemic risk event introduced by the Lehman Brothers bankruptcy. 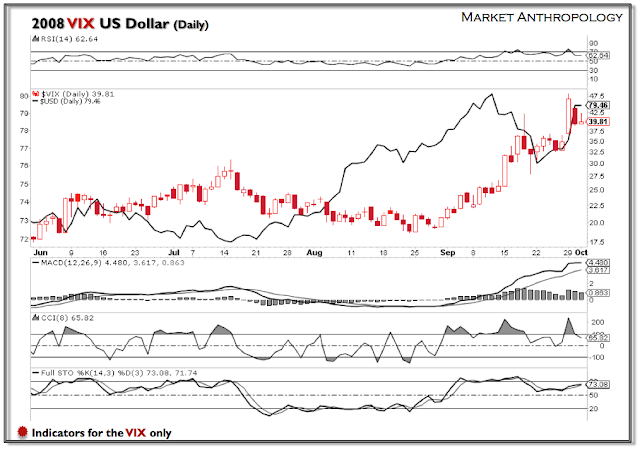 Today, the spike in volatility was pushed forward in August with the dual catalysts of the U.S debt downgrade and the European sovereign debt crisis. 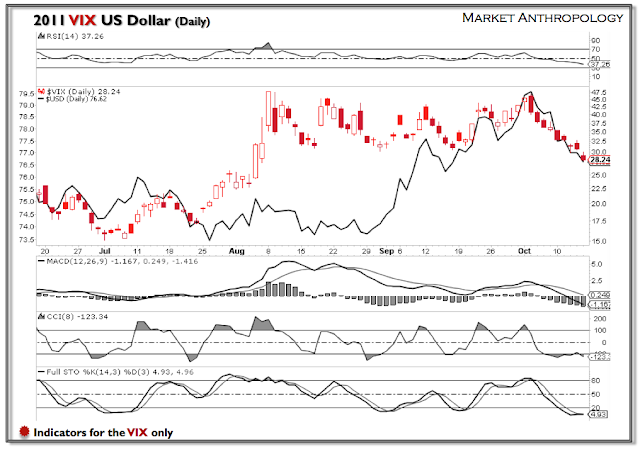 This is evident as well in the equity markets with the early August crash. In 2011, the first half of the year was marked by a strongly bid momentum tape that discretely expressed the underlying systemic risk in the gold/silver ratio. In August, the market caught up with that risk and came down to levels roughly commensurate with the 2008 yearly declines. 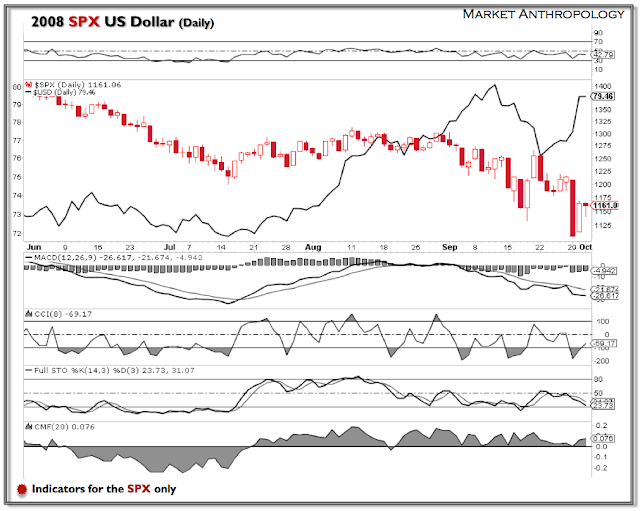 Since then, the equity markets have diverged with strength from the 2008 script. I believe this is logical to a certain degree, since the influence to our markets will likely be much less severe than the initial crisis was in 2008.
With that said, I believe the market will once again catch up to the underlying risks – which will likely be below the lows seen in the beginning of the month. 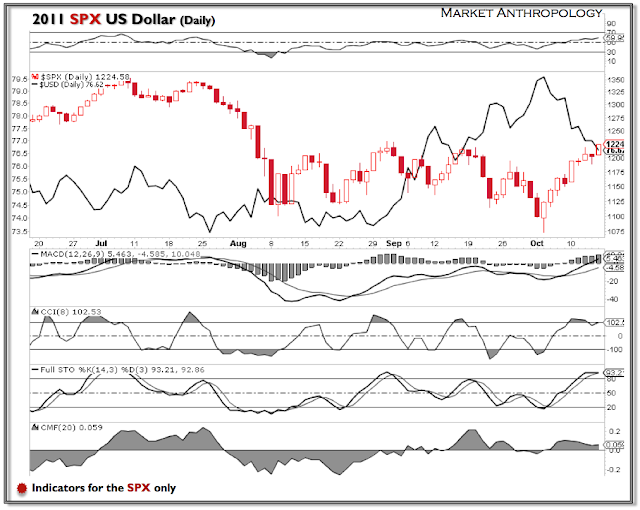