“Some of us will do our jobs well and some will not, but we will be judged by only one thing – the result.” – Vince Lombardi

Although I take great pride in developing my comparative work, it likely is misunderstood by many in how I apply it, benefit from it – and walk between different models. Like most things in life, it is the process that defines the form. Too abstract – and you loose perspective. Too much detail – and you loose emotion. 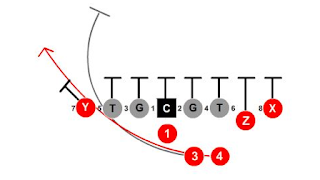 For lack of a better analogy, I work with analogs much like a football coach pages through his playbook on the sidelines. I typically have a half dozen or more models at hand to guide me through each week. When an audible is recognized in a pattern, I simply reevaluate a new offense to meet the shifting defense – and vice versa.

The art, besides developing the analogs themselves – is knowing when to give your positions latitude and when to go into a more defensive stance. Like football, the playbook is crucial; however, there’s more to winning the game than just reading the defense. Weather, athleticism and pragmatism in adversity – are essentials in finding yourself on the right side of the market and the game.
__________________________

With that said, there are a few analogs that I have been following and utilizing for several months that appear to be pointing towards an imminent pivot down in the equity and likely commodity markets next week. And while this flies in the face of recent strength, sentiment and short-sale data points, the allignment of the respective patterns lends more credibility towards the prospects of a pivot.

In late February I published a note that essentially warned of a second wave of the credit crisis was possibly taking shape along very similar lines as the initial wave that started in 2007. The primary difference being the time frame for the second wave was transpiring over a much longer time period.

“Whether the time differential is the efforts of our monetary handlers perceived and new found dexterity in dealing with the tentacles of a global credit crunch the second time around, or just the consequence of a slowing financial contagion/universe – will be up to the academics and historians in the years to come. But I can attest to the similarities in sentiment, the charts and the degree of hubris now being dispensed from both traders, the financial media and central bankers themselves – in curtailing the effects of the crisis. ” The Terrarium

This was one of the charts that expressed that comparative in February as the market was breaking out to new highs. 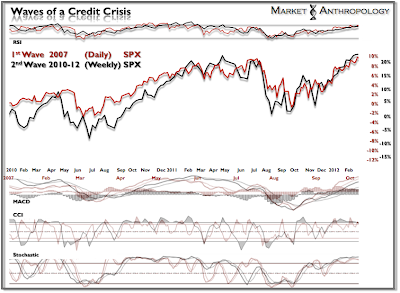 We now find ourselves on the backside of the coordinate central bank rally that manifested out of the lows last fall and perhaps at the apex of a relief rally from early June. Both the proportions of the price structure, as well as the momentum signatures in the respective metrics – are quite congruent in comparison to the 2007 model.

Continued strength next week up to the previous highs would certainly weaken and possibly nullify the pattern. Interestingly, although not surprising considering the self-similarity of their form, there is a daily fractal of the current tape from the June 4th lows that has worked loosely within the August 2007 retracement rally. I have been following and updating that pattern in the Finding Bernanke series; however, recently it has started breaking pattern in both structure and momentum. 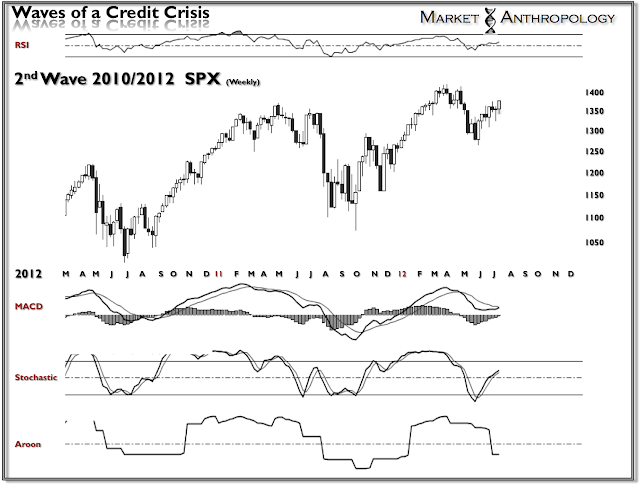 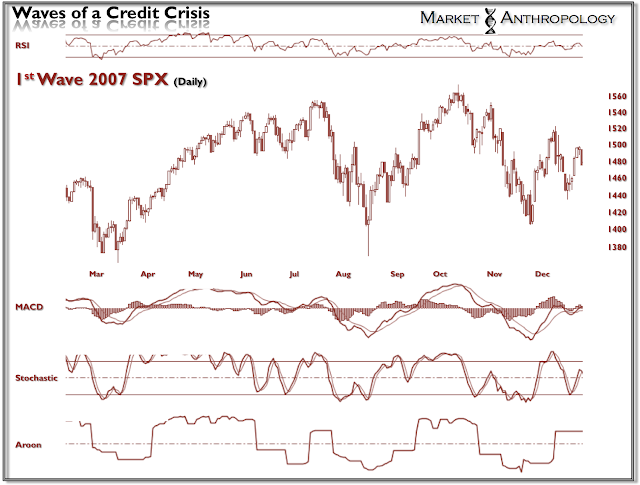 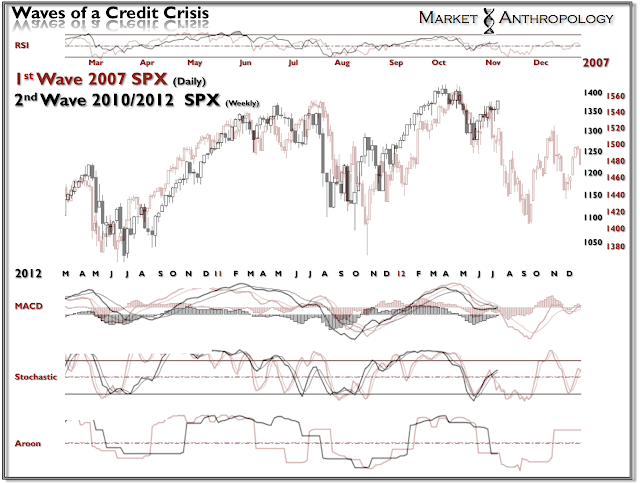 The next analog that has been quite useful in the past several months (see Here) in appraising risk appetites towards equities is the Aussie/SPX model. For an explanation of the rationale behind this comparison, see Here. To make a long story short, the Aussie (FXA) hit the pattern’s upside target today – as defined by the SPX model. This was essentially to break the pivot high from April 27th. 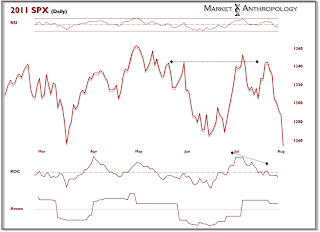 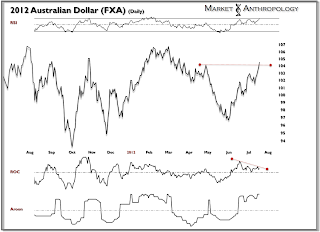 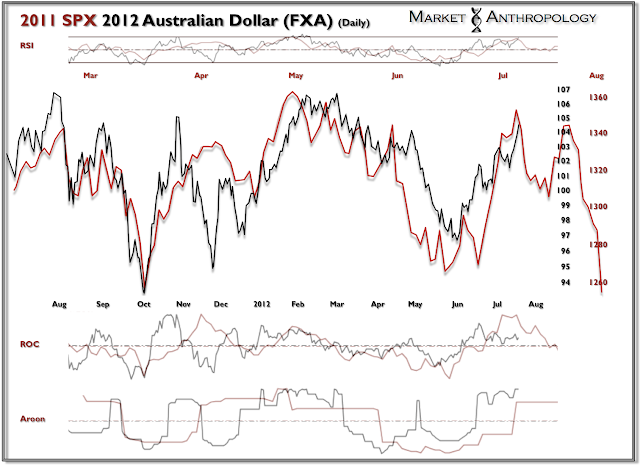 What I find interesting, is although the Aussie has rallied over 8% in less than two months, gold and silver have declined roughly 2.5% and 4.5%, respectfully.  Considering these markets typically trade in concert with one another –  that is a significant divergence. Should the Aussie follow the SPX model down the rabbit hole, I would expect the precious metals sector – currently resting on precarious support, to suffer substantial losses. I would expect silver could realistically find ~$18/oz – almost overnight.

However, I temper the innuendo of the negative divergence back to the last time the Aussie outperformed gold and silver in such dramatic fashion. It was July and August of 2010 – right before QE2.