The EKG of A Bust

Since the violent breakdown in silver in May I have been doing a follow-up note about every two months on the long-term comparative study between the Nasdaq bubble and what I perceive as a bursted bubble in silver.
My initial work stemmed from appraising the two seemingly disparate markets through the lens of a relative strength ratio, I deemed – the Relative Exuberance Ratio. Namely, it contrasted the Nasdaq/SPX market in 2000 and the Silver/Gold market up until late April of this year. The findings showed remarkably similar quantitative trends – with silver actually displaying an even more exuberant signal than the Nasdaq displayed in 2000.

Once the market pivoted, I extended the structural analogy with the Nasdaq on a long-term chart – with a few indicators overlaid to demonstrate the general momentum congruence of both markets.
From my last note in July:

The market pivoted with the analog in July and appears a whisper print away from 40. Should the market continue to follow script – it looks like the top of the range will come in around SLV 42 – after a shallow retracement ~ 40. I do not actively trade off of such a long term analog – perhaps I should be… Semantically Silver 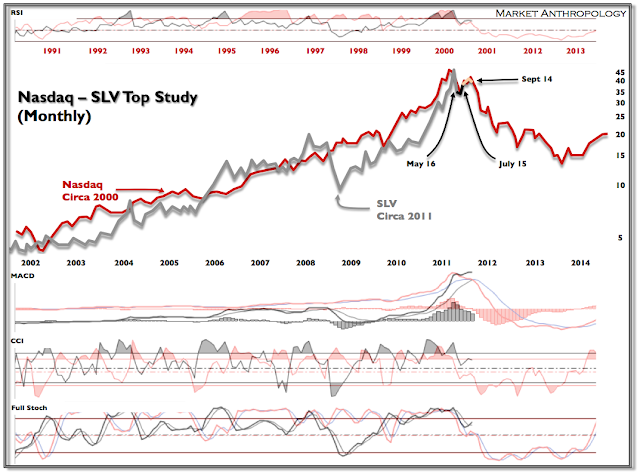 Since my last follow-up I have taken my own advice and incorporated it into my weekly trading framework for silver. To a large degree it gave me confidence when the market falsely broke out in August and I held a trapped short position for several days. We now know that SLV broke back down after briefly flirting in the 42’s and with significant bullish fanfare immediately extrapolating above 50.
I remain trading around silver with different strategies – because I firmly believed the next leg is approaching and will likely be filled with as much downside inertia as the break in May. Here is a compressed daily analog of silver to the 2000 Nasdaq market after the breakdown. As you can see from the hashed moving averages and the general performance range (coincidentally – just multiply SLV by 100 to equal the Nasdaq range) – both markets have trended quite similarly.
If this analog continues to replicate the emotions of a busted market in denial, it appears I will have to wait a bit longer for another test of the rebound highs – but not before SLV makes a quick trip down to ~ 36 over the next several sessions. 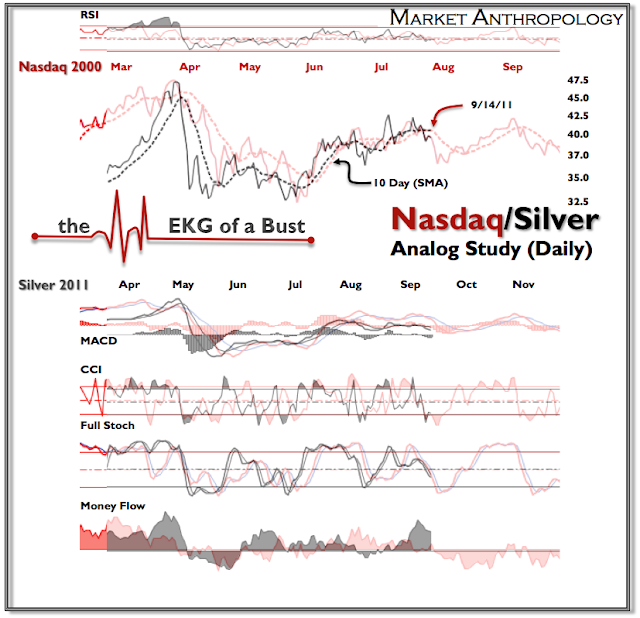