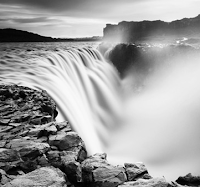 Picking up where we left off on Tuesday, the powerful kinetic feedback loop that began in the currency markets – appears to be gaining the critical mass needed to take a few assets over the edge next week. Specifically, we are looking at the euro, Australian dollar, gold and silver. Although the US dollar is becoming considerably overbought on the daily measure and has extended its longest weekly rally since before 2000, look no further than what transpired – either in its last secular breakout leg, or the two previous occasions that exhibited similar drops in historic correlations. As we cautioned on Tuesday, the risk continuum in this environment extends beyond normal distribution; i.e. – those looking at mean reversion strategies, either from an oversold price or sentiment perspective – may find themselves in a barrel cascading over the edge. 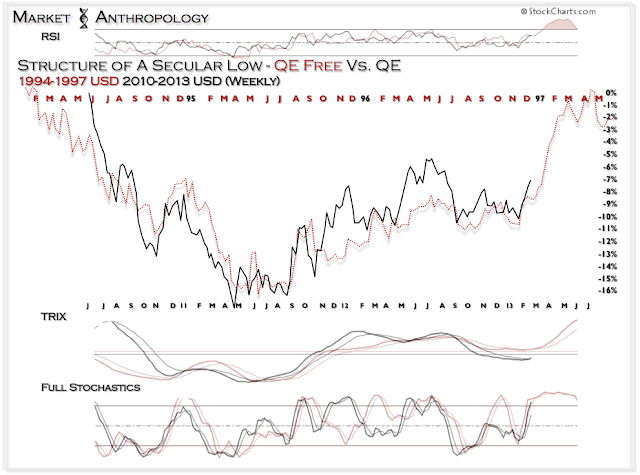 Taking a step back, you can visualize the flows in the euro as it has meandered a massive top over the past six years. As we have referenced repeatedly, the atypical correlation drop between the euro and the US dollar index has historically marked exhaustion for the euro and has been followed by powerful retracement declines. Although the euro continues to follow the structure and momentum unwind of the Mirrored Pivot comparative (for an explanation, see Here) – the kinetic potential across the hard commodity-scape appears to be of the 2008 variety. In either case, we expect the next phase of the decline to become more disorderly on the downside. 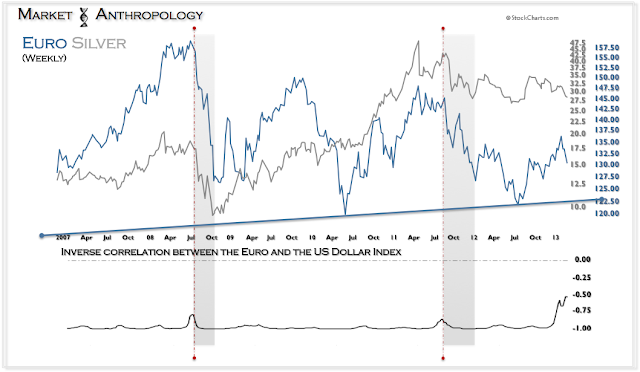 Silver finished the week above its descending ledge of secondary support that extends from its peak in 2011 – to what we have perceived to be a false breakout this September with QE3. 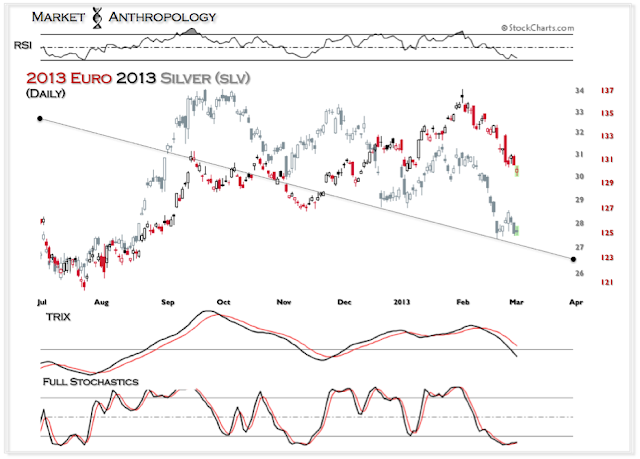 The parallel to 2008 in silver – through the EURUSD relationship, appears to be working towards a breakdown in the coming sessions. 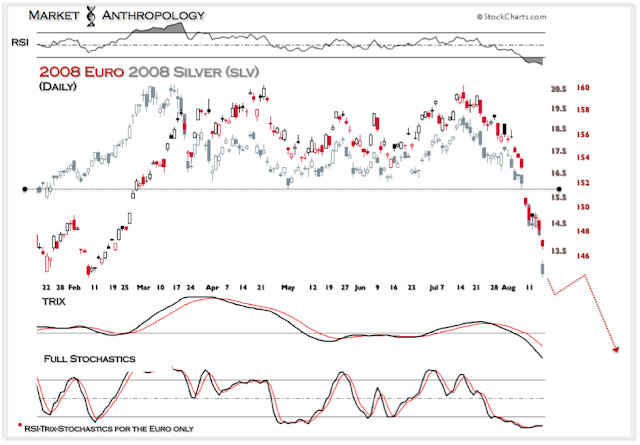 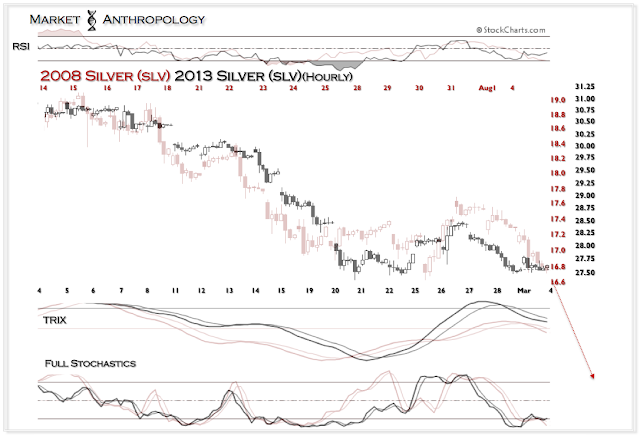 As expected, the Australian dollar was rejected by long-term resistance in January – with the diminished correlation window (for an explanation see, Here) with gold resolving itself on the downside. Not surprisingly, this dynamic is most resemblant of the set-ups in gold and the Aussie in the summer of 2008. 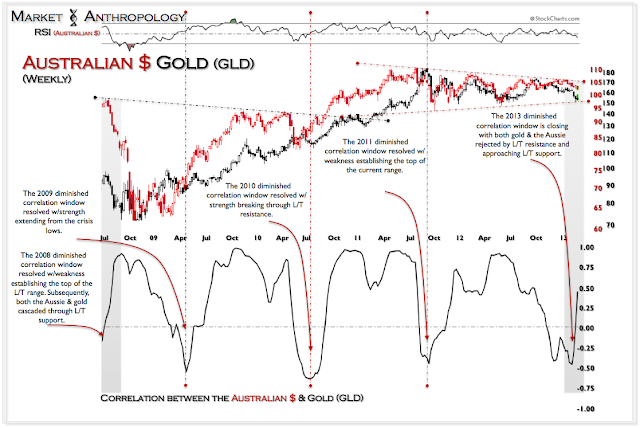 Momentum continues to unwind in the Aussie along similar lines to the previous bookend of the US dollar secular high that ignited the massive commodity cycle in 2002. And just as the Fed at the start of the previous decade attempted with little success at pricking the perennial strength of the dollar, the RBA to date has found limited traction in jawboning the Aussie lower. It appears they may soon get what they wished for. 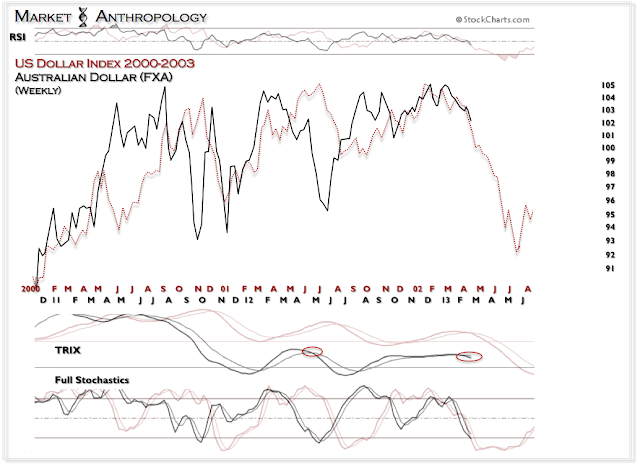 Taking the comparative Delorean a bit further back, gold also continues to unwind along very similar lines to its previous secular high. 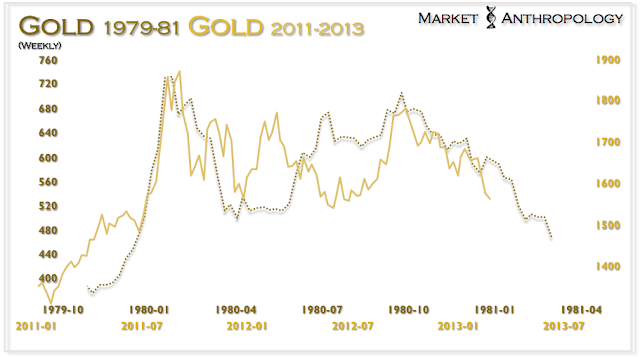 Leading the charge lower in gold, the miners continue to underperform spot prices by a considerable margin. Until we see the structure and momentum profile within this ratio of a low – the highway down in spot prices in the precious metals sector remains as open as Route 66. 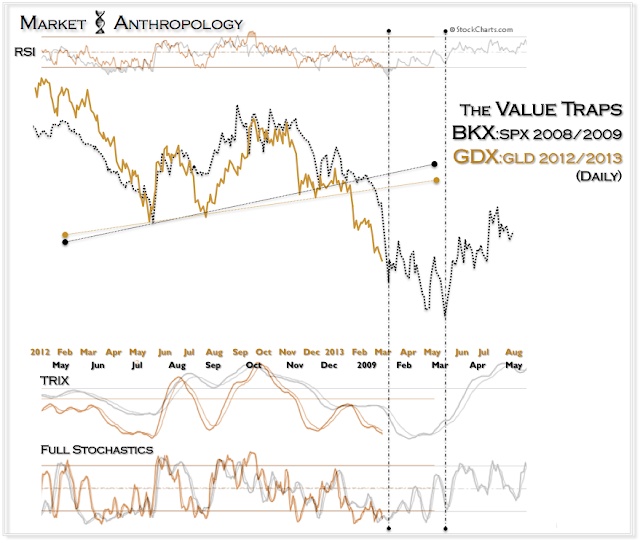 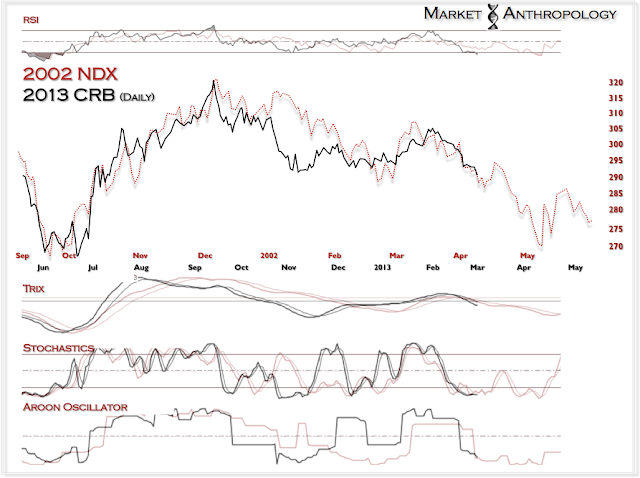 Continuing the theme of the next chapter in the great commodity unwind/deflation that has been in effect since QE3 was introduced in September; we do not consider it a mere coincidence that both the commodity markets and the commodity of momentum itself that became Apple – have been breaking down along similar lines. We feel that the old market adage, “Commodity market weakness presages equity market weakness” – rings especially true today, despite the resilient bid in the equity market indices. 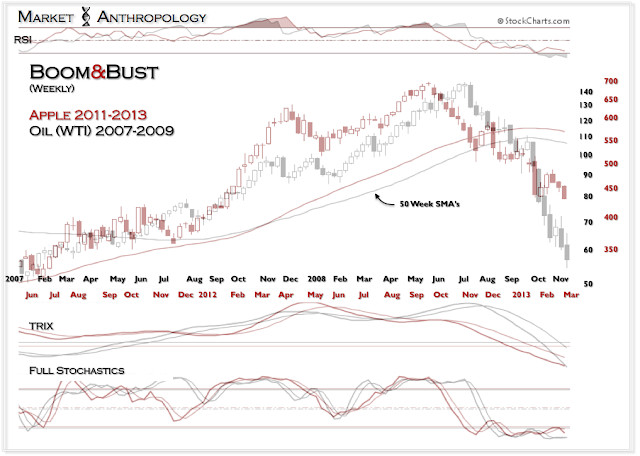 It is our expectation that the spoils of this disinflationary dynamic will soon start to present themselves in considerable market turbulence within the equity markets. That is unless it is in fact different this time.