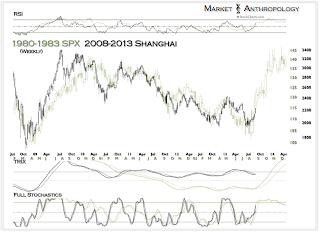 Back in the beginning of summer (see Here) we speculated that the sentiment scales had tipped in favor of taking up a contrarian position and perspective on China – and saw the potential for equity market outperformance by the balance of the world ex-US. Although we recognized that through the Fed’s stewardship the US was perceived to be the safest neighborhood in an otherwise murky world, the degree of pessimism to both our largest trade partners (China & Europe) was clouding the very real picture they were both bouncing off the bottom. 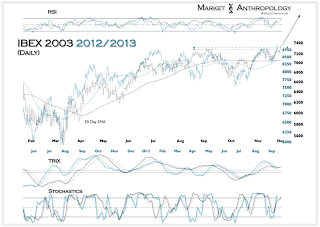 Today, as the US equity markets have traded in fits and starts while digesting the prospects of diminishing monetary stimulus from the Fed, another prospective military front opening in the Middle East and a surge in long-term interest rates – the economic landscape surrounding the US has firmed. For example, the Shanghai composite is up more than 20% from the intraday low on June 25th and Spain’s IBEX (right) has broken out to a new yearly high and is up roughly 18% (intraday) over the same time frame. Coupled with traders appetites that have benevolently been fed, primed and maintained throughout the year – risk has consistently arrived on the upside in the equity marets.

Broadly speaking, over the past several months we have contrasted a few different comparative market environments that we felt most closely fit the structure, momentum and sentiment profile – namely the upside Meridian break that opened the doors to Irrational Exuberance in 1995 and the consolidation tape from the last Fed tightening cycle in 2004. Fittingly, the market has traded with similar personalities from both time periods and in many ways, has displayed some of the nuances we try and incorporate with our comparative work. While we recognize the uniqueness and variability of the present that inevitably distinguishes a new and distinct path,  a look back at the past has far more often than not provided actionable resource and contrast towards future market behaviors. 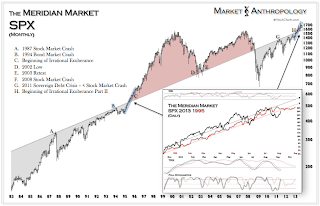 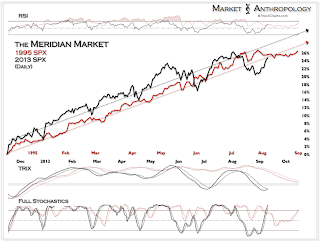 Although the equity markets have trended in a wider and more volatile trading range than was encountered in 95′, the performance and trajectory have run commensurate with the last time the SPX broke through long-term resistance (Meridian).

Sizing up the higher beta indexes such as the RUT or the NDX – as well as the always crucial financial sector the bulls want to see outperform (see Here), we find very similar and buoyant performance trends then and now. Because of this, we have maintained expectations that momentum would remain with the bulls as long as support from the Meridian held (for September ~ 1570).

Over the next month, the 95′ comparative calls for a narrow and consolidating trading range before the market takes its next leg higher. 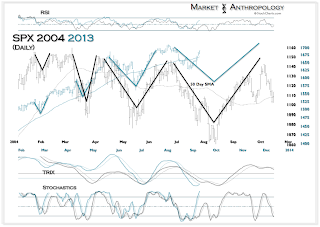 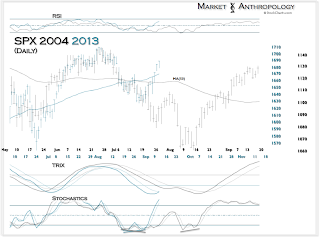 Back in 2004 when the Fed was beginning to steer the market away from aggressive monetary policy, the SPX had already bounced and tested the Meridian in the previous year and was comfortably trading ~ 20% above its support.

We find it interesting nonetheless that with the monetary policy parallels with 2004 (see Here) and the subsequent dislocations that were brought upon the Treasury and emerging markets, the SPX has trended across the grain with the comparative –  yet momentum and volatility has unfurled more similar than not as participants have digested the prospect of diminishing monetary stimulus while also maintaining trend above the Meridian. To us the market has the brain of 2004 with the heart of 1995.

Generally speaking, once the market broke through and maintained inertia – all ties have gone to the bulls. Recently, it appears the SPX had tipped her hand at the corrective lows when positive momentum and strength divergences were noted (see charts) that were quite similar to the August 2004 low (see Here). 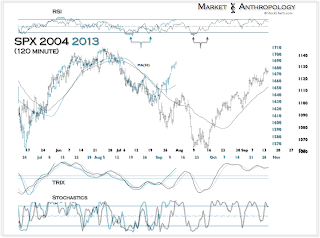 In hindsight, but also noted at the time, the VIX appeared more representative of exhaustion than continuation. While we have maintained bullish postures on foreign equity markets, namely, emerging markets, China & Spain – we had suspected another leg lower was more likely than not for the SPX. Barring an 87′ scenario that we highlighted last week (see Here), it appears more likely the SPX will follow the IBEX’s lead to new highs over the short-term. 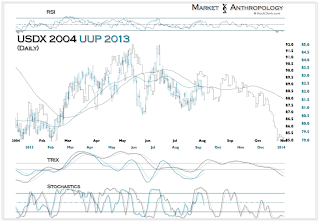 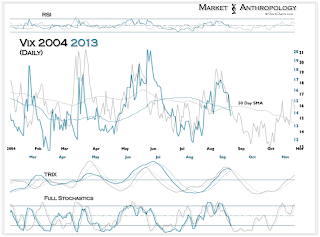 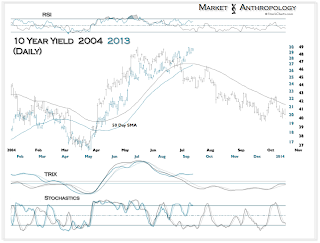 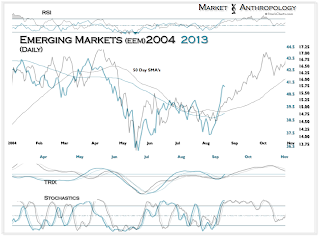 Similar to gold’s retracement decline at the end of July 2004, we would speculate that this mornings cascade below its 50 day sma is close to the trough low. 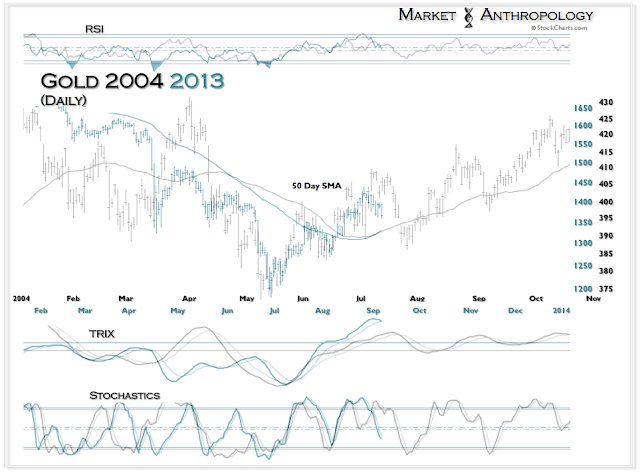