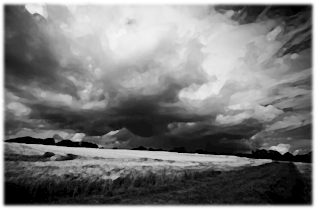 Although I am quite bullish over the long term towards the US equity markets, I believe we are imminently about to be hit by a strong squall – the components of which have been accumulating over the last several weeks. I believe I have addressed many of them in various fashions in my previous work.
Technically speaking, traders were looking at SPX 1345 as a major test of the market’s moxie to move higher. On Tuesday, the market broke through it. Yesterday, it tested that level and sprung higher post Bernanke. All in all, very healthy price action (structurally speaking). However, for the bulls to keep driving, that level needs to be maintained.
Where will the additional fuel come from in the short term?
Momentum can only carry the market so high without additional catalysts refreshing the animal spirits. Based on the momentum oscillators that I follow, the market is at the extreme end of this momentum squeeze. It is basically in the hands of the shorts that have been forced to cover at this inflection point and the reluctant investors and money managers that have been sitting on the sidelines waiting for a correction. David Rosenberg’s latest about face towards equities is one example of this dynamic. How deep their bench is, will depend on how far the index can get away from the pivot. The market will still need more fuel to maintain its upward trajectory.
With a respectable, but certainly not spectacular earnings season in the rear view mirror, and this month’s Fed decision out of the way, the market will turn its attention to the next major market moving event – the conclusion of QE2 and the next Fed meeting on June 21 through the 22nd. Between now and then, the market will wrestle with the notion of a less accommodative fed, higher energy and commodity costs, increased inflation expectations, higher interest rates and a saturation of bulls on the same side of the fence.
Based on various stock-timing research, institutional participation has been waning since early February while retail investors (as noted in the Rydex data) have become increasingly bullish – notably towards the extreme. I like to look at these data sets rather than the sentiment surveys for the equity indices, because traders ultimately vote with their wallets not with their mouths.
Will the market lob a beach ball or a grenade to the retail traders now following the rather obvious breakout pattern in the SPX? 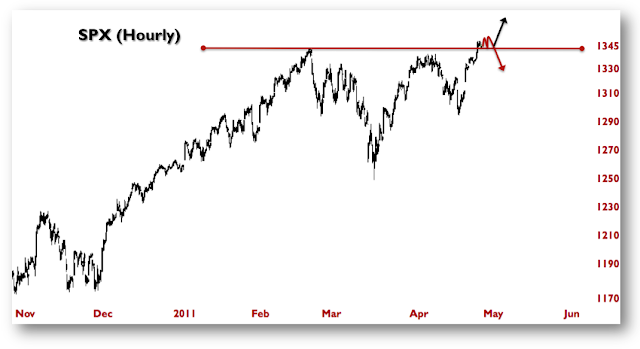 If we look at the VIX, we are sitting right below the bottom of the range that the market has been trading in for over four years. And while it would be misleading and false to interpret a falling VIX as overtly bearish towards the market here – it does indicate complacency in the options pits, even as we approach and move through some key technical levels.
Contrarian perspective would find that bearish.
It would be preferable to see a moderating to rising VIX, as in the 1990’s when the market moved higher in concert with a rising VIX.
In essence, the market is priced to perfection here.

Appraising the commodity sector (a component of the everything goes up market), we can see that we have pulled up to both the 61.8% fib retracement level from the 2008 top and what could end up being the right shoulder of a very broad H&S pattern. Considering the commodity trade has been partially a trade against the US Dollar, and the Dollar is about as washed out as it could possibly become from both a technical and sentiment perspective (yes, and even the great currency trader – Matt Drudge, believes the greenback is headed significantly lower) – there remains to be seen what will propel the sector higher at this inflection point.

As everyone is well aware of by now – I have been following silver as the canary in the commodity sector and a reference perspective to fast money in the asset class. At this point, anyone arguing the fundamental underpinnings to the silver story is at the very least a pollyanna to the obvious parabolic trajectory it has taken in the past several weeks. This is not a continuation pattern – it is an artifact of exhaustion. Apparently Mr. Roger’s and I differ on what would be construed as parabolic. I think we can all read between the lines – the editors apparently thought so as well.
Interestingly, as of this Thursday afternoon, the market has pulled through the monthly meridian line I created a while back. The market would need to loose approximately 10 points on the SPX tomorrow for my bearish bias to hold up according to merdian theory.
We will soon find out. 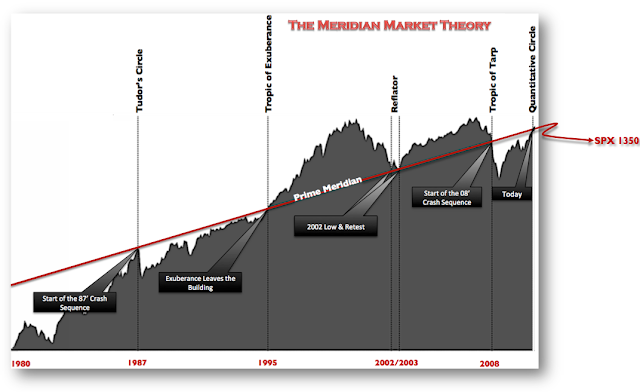 In conclusion, I believe the markets are primed for a rather large bull-trap. Anecdotally, reading that the esteemed David Rosenberg has reluctantly turned bullish towards equities at this level gives credence to my perspective. While I have great admiration for his research and writing – economists typically make lousy trading decisions.