On the heels of last weeks sharp recovery, the Japanese yen has continued to climb out of the broad base carved over the past year, making fresh 14 month highs and leading the currency charge against the US dollar. Worth noting, Monday’s close marked the first major “higher high” since the yen cracked at the end of 2012 and began its long decline to its cycle low last June.

When it comes to gold, the recent technical hurdles overcome by the yen, bodes bullish towards gold’s future prospects. And although our outlook for gold and precious metals is primarily derived from an expectation of broad dollar weakness (i.e. firming inflation & declining real yields); as mentioned in previous notes, we’ve closely followed the yen as a leading proxy for gold.

Both gold and the yen have trended closely together since the equity markets peaked in October 2007 and the financial crisis unfolded over the next two years. While gold set its closing high eight weeks before the yen in 2011, it subsequently followed its downside breaks with varying lags of several weeks. From a performance perspective, both assets declined around 40 percent (yen 40% & gold 45%) from their respective cycle highs in 2011.

On a weekly timeframe, the yen is working on its first close above the broad range established since the end of 2014. 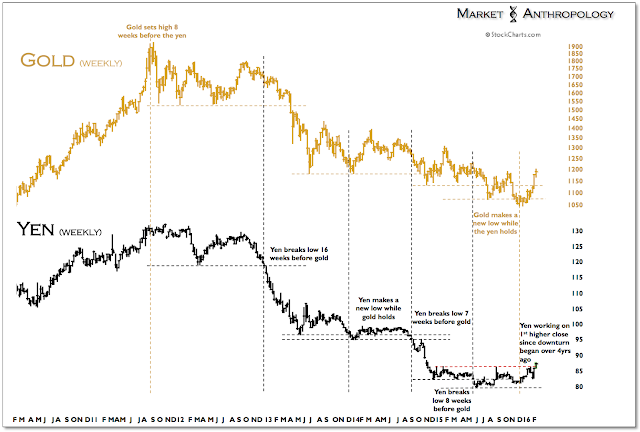 We included two charts below (Daily & 60 minute) that use the yen as a prospective guide for gold over the next month. As with most comparative charts, we incorporate the view not as an expected literal reflection of a markets future relative performance – but to broaden our perspective, based on how these assets have performed in the past. Using a daily chart of the yen as the leading (~ 6 weeks) asset, a large shakeout before a resumption of the uptrend would be the pattern to watch for over the next several weeks. 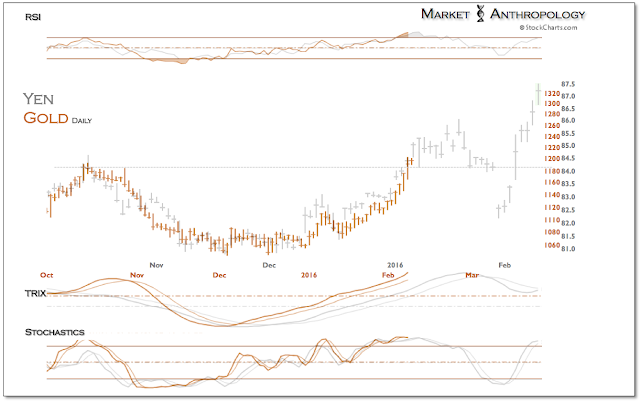 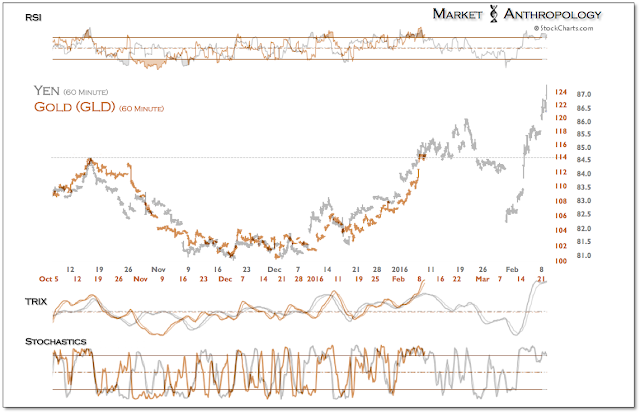 Following up on our thoughts in last weeks note (see Here), we wanted to point out the breakdown similarities that we have been following in the dollar – compared to the EUR/USD breakdown during the late summer market decline in 2011. Although the top has been much broader than we expected last year, not surprisingly, it is the inverse relationship today that is coming under pressure, as the euro has been a major funding currency in the markets over the past few years. 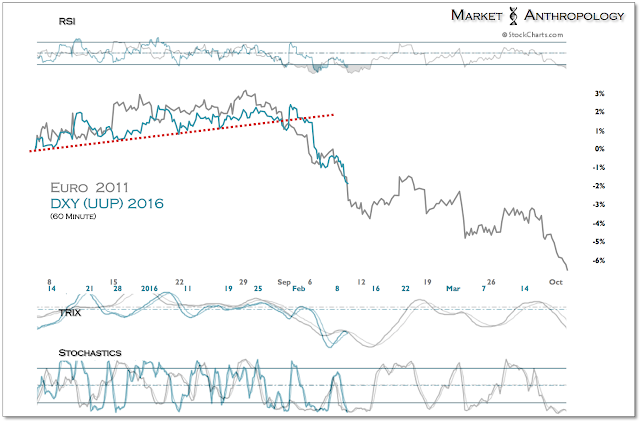 This is also why we expect the move in precious metals to have greater staying power in 2016, as the currency backdrop in the markets shifts from dollar strength to weakness. 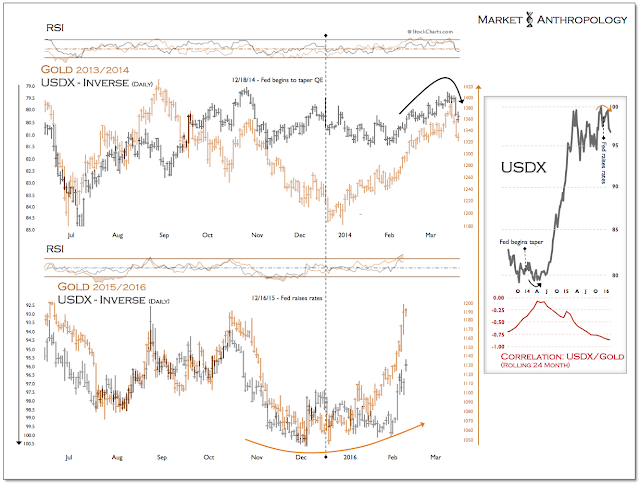 The precious metals miners, who had replicated their downside moves over the past several years, have begun to break out of the repeating pattern. 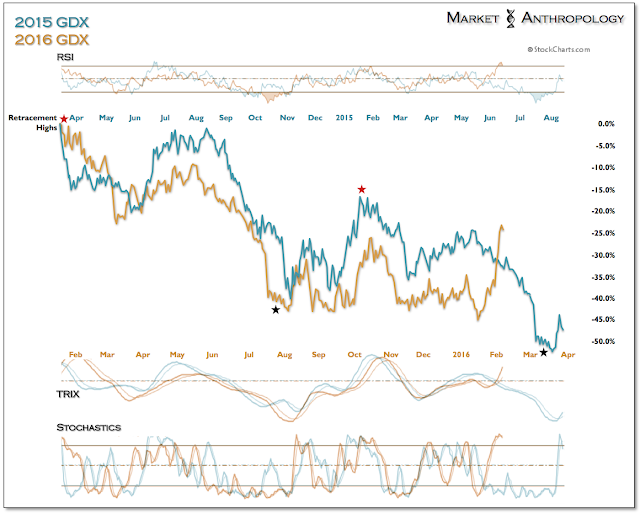 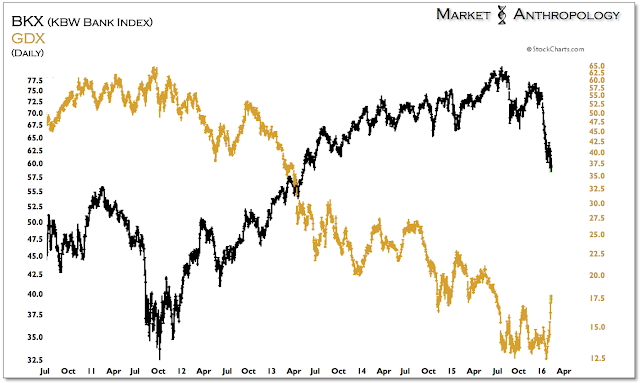 And just as the financial sector has come under significant pressure in recent weeks, the miners have taken the outperformance baton from the banks, that in Q3 2011 finally caught a bid as the inflation driven market theses were cresting and turning down. 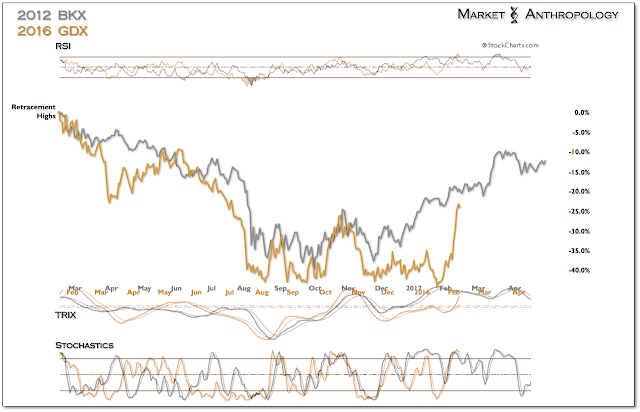 All things considered, with financial markets likely remaining under pressure this year and central banks broadly limited, we see no reason to believe that real yields won’t ultimately test their respective 2011 lows, which augurs that another significant move higher still remains on the horizon for precious metals. 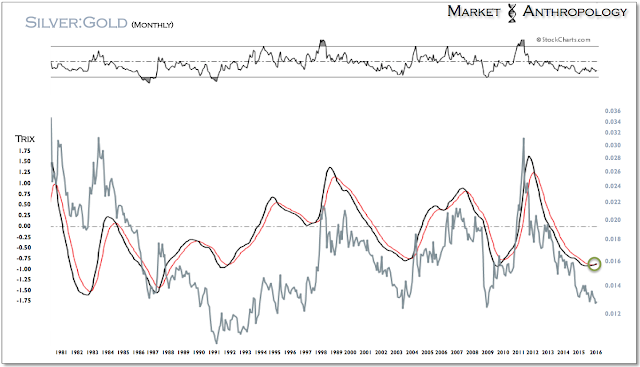 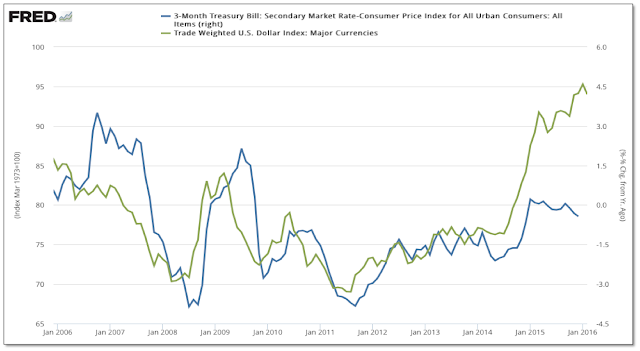 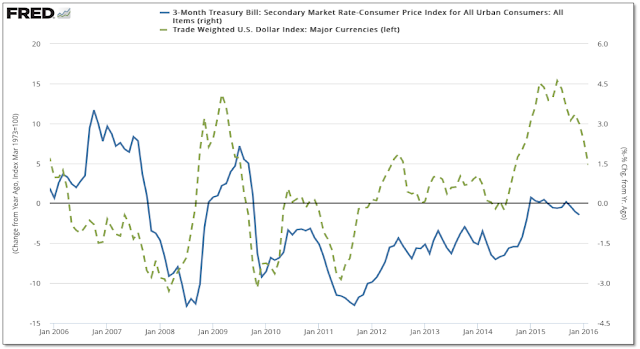 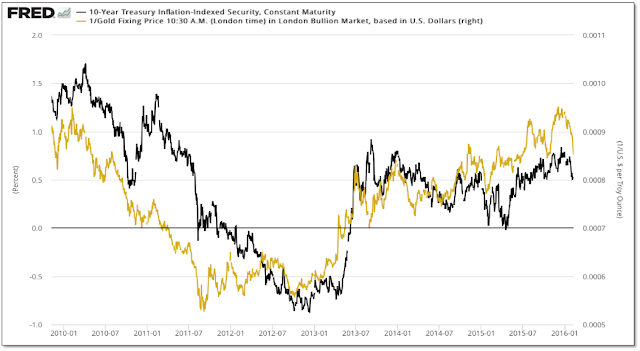