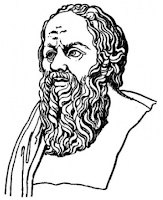 A wise and bearded man once said, “Everything in moderation. Nothing in excess.” And although he didn’t apply those words to his own considerable plantations of hair, his 2500 year-old philosophies still point us with great pragmatic purpose towards finding the mean between the extremes.

From eating to exercise and penicillin to parasites – we recognize that there’s a time, place and dose for just about everything. Considering these extraordinary measures have been in place throughout an entire Fed cycle, it appears lost on most the reality of what QE stands for and inspires in the market these days. As the inflation data (which mind you is shown in the markets rearview mirror) slides towards the deflationary side of the continuum – many economists and participants are asking themselves, how can the Fed step away from these monetary measures when the inflation data continues to come in so weak? Why isn’t the patient responding, QE was inflationary – right?


From our perspective, the Where’s Inflation?/QE conundrum (not to be confused, although entirely related and reminiscent of Greenspan’s own bond market conundrum from the previous Fed cycle), doesn’t require intimate knowledge of the structural transmission mechanisms of QE from the Fed to the market. At this point we’d argue it’s predominantly best understood as a behavioral tool, and would guess that most are reading those respective tea leaves – backwards.

In November 2008, QE was introduced as a critically needed and positive structural development in the colossal mortgage backed securities market. These markets had stop functioning normally in the wake of Lehman and pressures were still building within the system. The bottom line became that the Fed needed to supplement the Treasury’s own safety net with TARP and provide the markets more time and greater relief. One could argue that the initial behavioral effects of QE on participants was less positive than its structural intentions. They still needed to come to terms with the gravity and scope of the situation – and the Fed’s extraordinary measures likely reinforced those fears and anxieties for a spell. On the one hand, participants knew the Fed was stepping in as THE backstop for the team – on the other, they realized their own catchers and players were severely injured and more hard pitches would be thrown. The bigger question at the time was – could the game still proceed and would they be able to perform?

By March 2009, participants had ample time to digest the enormous challenges, changes and dislocations that had cascaded throughout the markets for much of 2008. Although the markets were still under pressure, the banking sector was in the process of being recapitalized and the fires – while still smoldering, were no longer seen as life threatening to the system. Participants were wounded, weaker and playing from a diminutive position – but they were still there playing the game. When the Fed announced on March 18th that they were significantly expanding the size of their QE programs, it was welcomed from both a structural and psychological point-of-view. The S&P immediately surged three precent higher and most markets (sans the financials) were now trading above their 2008 crisis lows. QE had provided both a positive structural and behavioral response that helped inspired inflation expectations away from the crisis lows.

Fast forward to today and its readily apparent the markets have moved 180 degrees away from how they first responded to QE in November 2008 and March 2009. Structurally speaking, the markets have provided corporations with an enormously beneficial window to build their historic cash positions and the individual considerable time to de-leverage from where they were just five years back. At this point it seems logical to consider that if the Fed wants higher inflation, there’s significant potential energy there just lying in wait. From a behavioral perspective, the Fed’s own monetary measures are no longer considered a positive stimulus for inflation expectations and growth, rather much the opposite – a confirmation that they believe the markets still require further external support. This is why we believe that the extension or curtailment of QE is predominantly a behavioral signal to the market these days – and one that participants have had plenty of time to digest since the taper was first brought to the table earlier in the year. We don’t believe it’s coincidental that those assets most closely tied to inflation expectations have continued to come under pressure from the relative ambiguity extended in recent months from the Government shutdown to the economic data and finally the Fed’s own disparate collective consciousness.

For those that consider this monetary experiment derivative of Japan in the previous decades or our own Great Depression in the 1930’s – the taper should provide a good litmus test of whether the inflation potential previously mentioned will just lie dormant as it did in Japan – or begin seeping/surging into the economy. Broadly speaking, we feel the U.S economy and consumer is a radically different behavioral organism and more dynamic than Japan and their many entrenched doctrines. For better and worst – creativity, gluttony and ignorance has been our bliss. By Bernanke’s own admission a few weeks back, in hindsight the financial crisis was quite similar to the 1907 panic, than perhaps what his entire body of academic work biased him towards with monetary policy – the Great Depression.

While the structural and behavioral responses by participants are worlds apart today, the respective sectors most influenced by inflation expectations – or lack thereof (i.e commodities, commodity currencies, TIPS and emerging markets), have followed a similar disinflationary trend. As we mentioned a few weeks back, the difference this time around has been that the equity markets (EEM) that are predominantly derived from the commodity story have led the currency and commodities sectors themselves.

Our general impression and as signaled by gold and silver’s sprite reaction following the strong jobs report last week, is that should the Fed more definitively define a timetable of the taper, those assets most closely tied to rising inflation expectations should once again begin to strongly outperform.

At this point, and for all of our comparative perspectives – we don’t believe either the Japan circa 1997 or the Great Depression parallels will hold many insights with today. A larger question once again arises: Will the game still proceed without QE and will we be able to perform?

We still believe in the game and think Bernanke and Yellen will confirm as much. 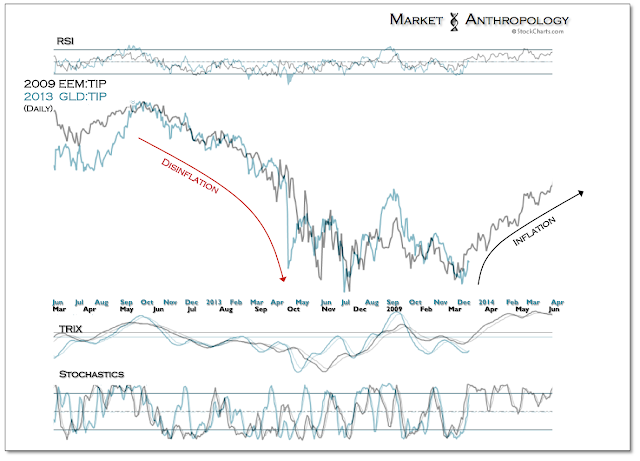 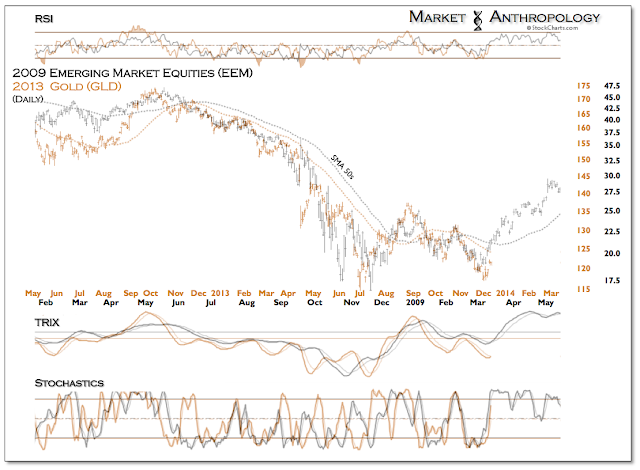 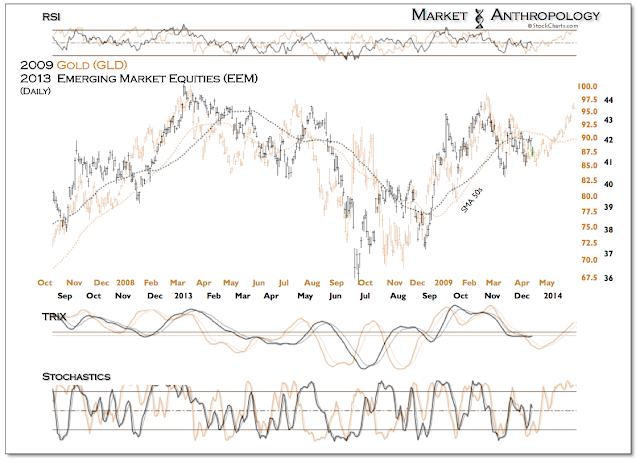 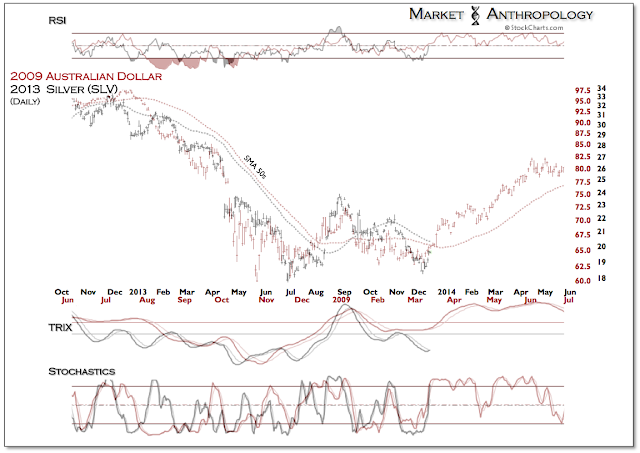 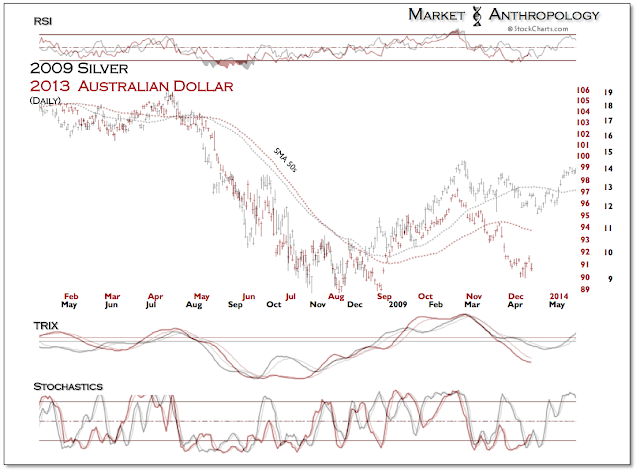 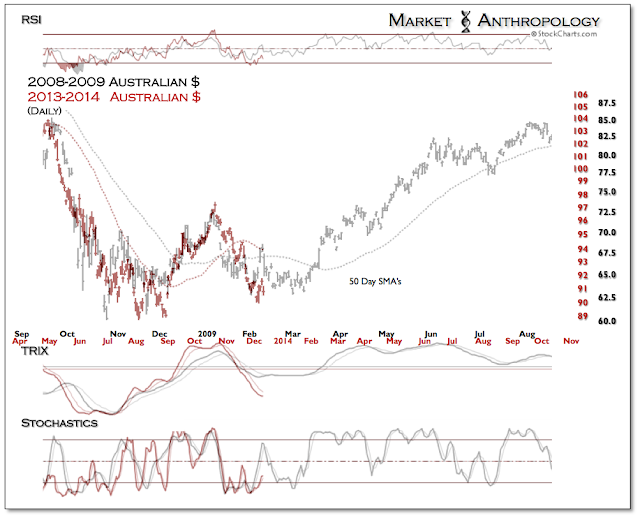 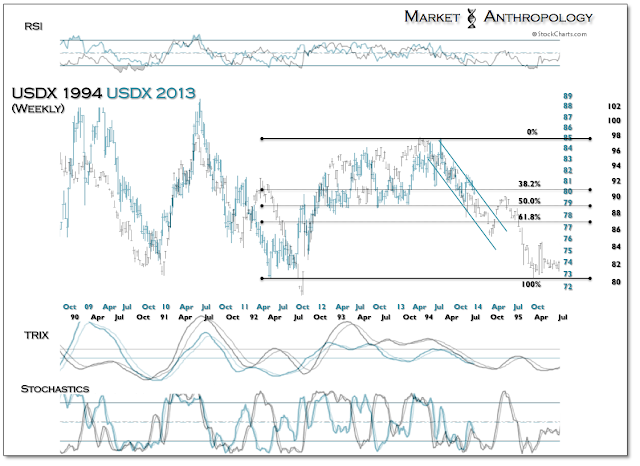