The Treasury market continues to diverge from long-standing and perennial expectations of higher yields and interest rates. Of the many twists and turns that the markets have made this year, a running constant has been the grind higher of long-term Treasury prices and lower yields. For those participants that largely ignored the relative extreme in yields coming into this year and were lulled into complacent postures by the perception of historically low yields and a Fed pivoting on policy – the market has once again proctored another painful exam in the fundamental forces of nature.

Beset by its almost mythical reputation at the hands of its monetary masters, maestros and anonymous vigilantes – and seemingly forever lost in translation, the conundrum first mentioned and described by Greenspan over nine years ago is alive and well today.

“There is little doubt that, with the breakup of the Soviet Union and the integration of China and India into the global trading market, more of the world’s productive capacity is being tapped to satisfy global demands for goods and services. Concurrently, greater integration of financial markets has meant that a larger share of the world’s pool of savings is being deployed in cross-border financing of investment. The favorable inflation performance across a broad range of countries resulting from enlarged global goods, services and financial capacity has doubtless contributed to expectations of lower inflation in the years ahead and lower inflation risk premiums. But none of this is new and hence it is difficult to attribute the long-term interest rate declines of the last nine months to glacially increasing globalization. For the moment, the broadly unanticipated behavior of world bond markets remains a conundrum. Bond price movements may be a short-term aberration, but it will be some time before we are able to better judge the forces underlying recent experience.” – Alan Greenspan – 2/16/2005

Last year, while bond market mavens and economists collectively decreed an end of the low yield and rate environment we have swam in over the past thirty years, a simple panoramic observation of trend, symmetry and proportion – trumped a more nuanced and fundamental understanding of a market given to such lofty descriptions as fixed income and smaaht money. While it would be foolish to completely dismiss the effects of current monetary policy or the economic backdrop against which the Treasury market trades, the gestalt laws of perception appear to hold more weight on the market when one considers the totality of the cycle, versus the immediate structural disposition.

Life is not complex. We are complex. Life is simple, and the simple thing is the right thing. – Oscar Wilde

While we wait on yet another unified or conspiracy theory to explain why yields are so low today – or why they are poised to rise tomorrow, we would simply urge consideration of the relative symmetry and balance expressed in the long-term yield cycle – keeping in mind the words of wisdom of Wilde and Newton. In as much as conventional wisdom perceives a prospective sharp turn in the over 30 year bond market bull, the lengthy historic record of its market cycles paint a much different picture and one most participants have yet to even consider. As pointed out by the maestro himself – the world is indeed Friedman flat. It should be interesting to see how after the Treasury market stabilizes we collectively adapt to a long-term yield environment that may flatten considerably as well. 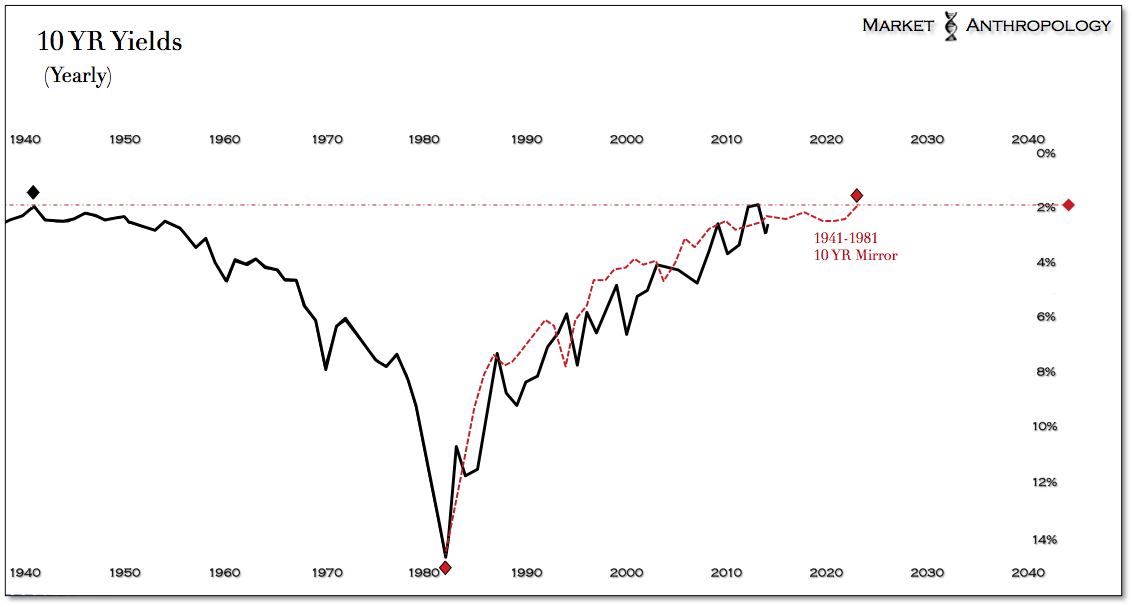 Diving down a timeframe or three, we expect the relative extremes in yields over the past two years to have painted the top and bottom rails of a new and flattened longer-term range. Comparatively speaking, the range between 1.5% and 3.0% leaves considerable territory to traverse.

10-year yields have loosely followed the inverse structure of the secular crest in yields in the fall of 1981. Making note of the symmetry of momentum as represented in the balanced pattern expressed in the stochastic oscillator, the current leg lower likely has more room to fall over an intermediate time frame. 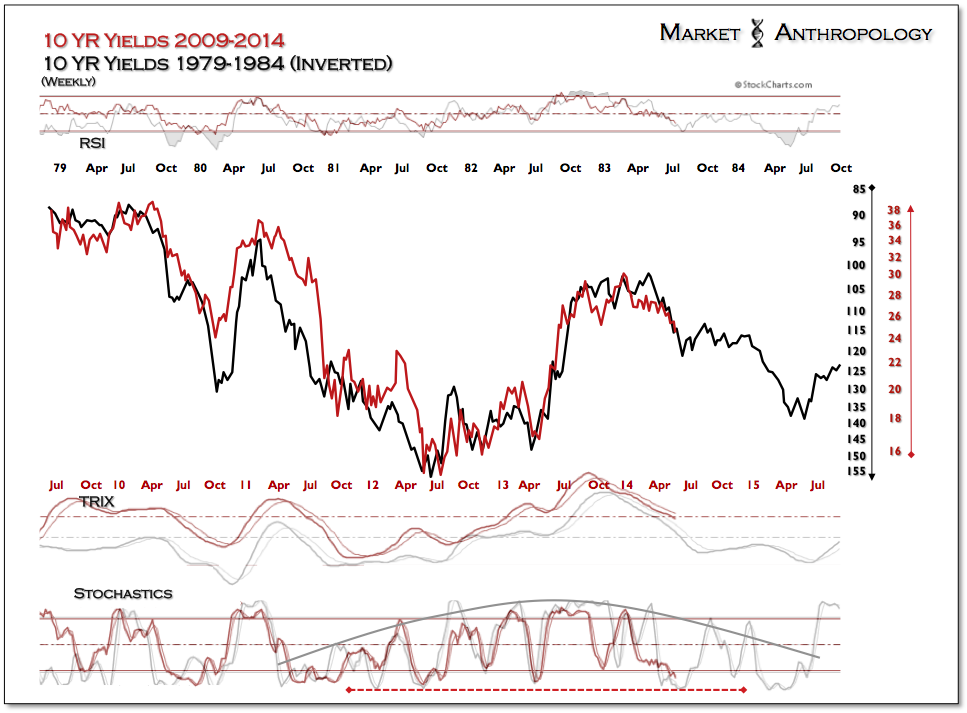 The same is true when we consider the arc and proportional recoil of yields as contrasted with the the 1994/1995 rate hike regime that doubled the fed funds rate over one year from three to six percent. 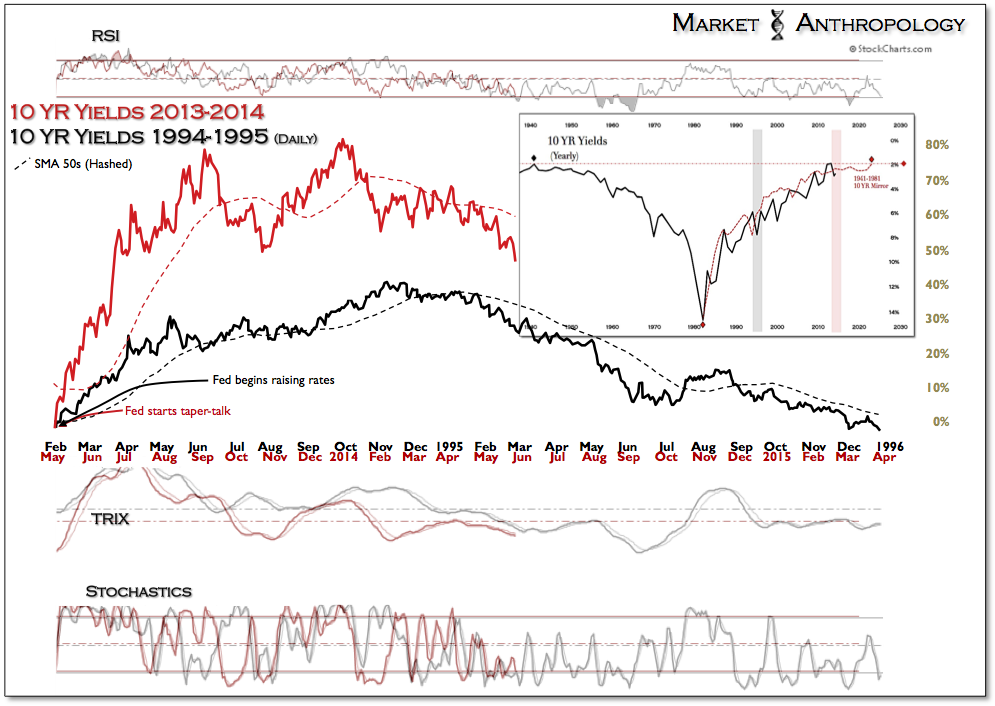 Similar to the moves in long-term Treasuries, TIPs have continued to extend above a Q1 breakout. While over the short-term they may retrace some of those gains, we expect the uptrend to sustain itself as inflation expectations improve. 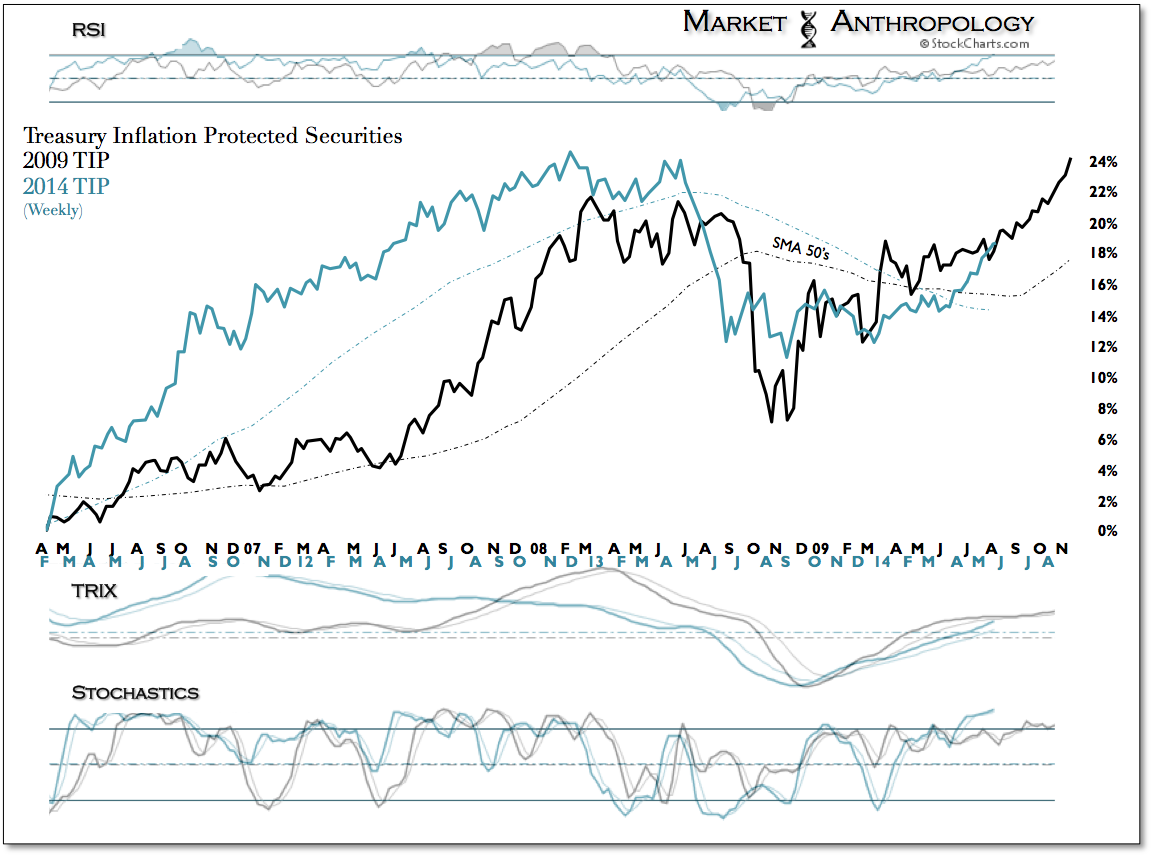 Mirror Mirror on the Wall, Who Is the Fairest of them All?

What continues to surprise and try our patience with respect to our bullish leanings in the precious metals sector is the massive size of the base and prospective breakout range over the past year. The bottom line – it has been over three times the size we initially suspected would resolve when the market first started basing at the beginning of last summer. While the respective trends have not broken down over the past year, the range has become narrowed as the market has traversed three balanced lows. For the magnitude and breadth of the decline coming into the initial low at the end of last June, the size of the subsequent structure is unparalleled over the past forty years since Nixon ended the Bretton Woods Agreement and the US dollar became a fiat currency. Although there are several aggravating and mitigating factors that have fostered the structured range in the sector, we would argue the largest has been the scope and proportion of the move in long-term yields over the past two years.

As the complex structure in yields has started to resolve lower, we see two comparative possibilities for the sector as illustrated in the chart below. The first being the retracement decline in precious metals through 1976 or the initial breakdown following the secular high in 1980. While we are still leaning towards the former, we would expect at minimum a consolation move higher similar to the retracement rally in 1982 to develop over the balance of the year. 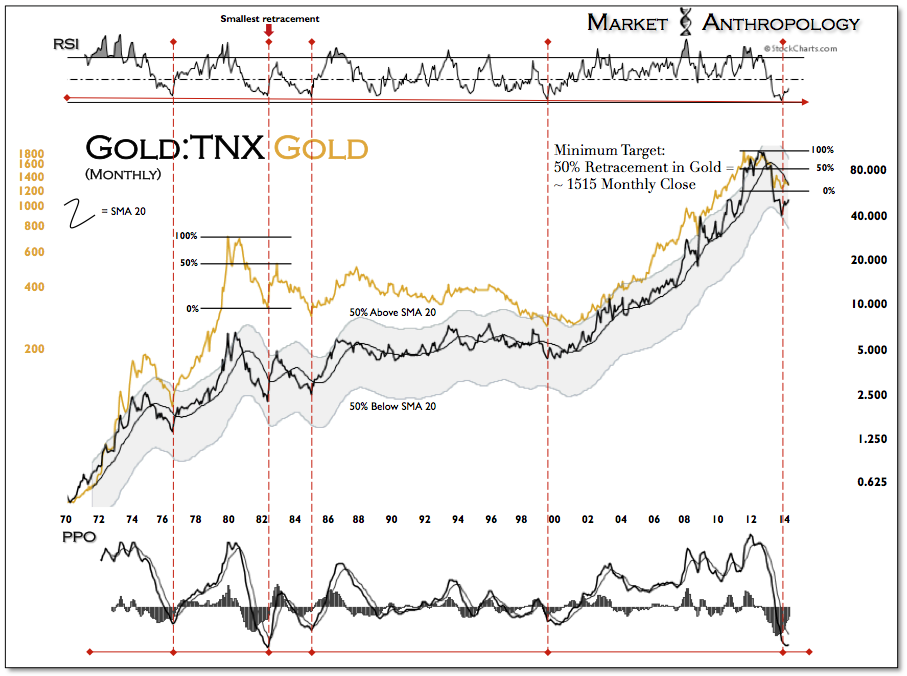 As we previously noted, the mirrored symmetry between yields and gold has maintained form over the past two years. Over the past month, gold has diverged lower from its inverse relationship with yields. Considering the strong technical framework that gold typically trades in we expect the divergence will resolve when gold completes the balance of the pattern. While the breadth of the move has been unusually massive, the prospective inverse head and shoulders pattern is a more typical technical reversal for gold to complete. 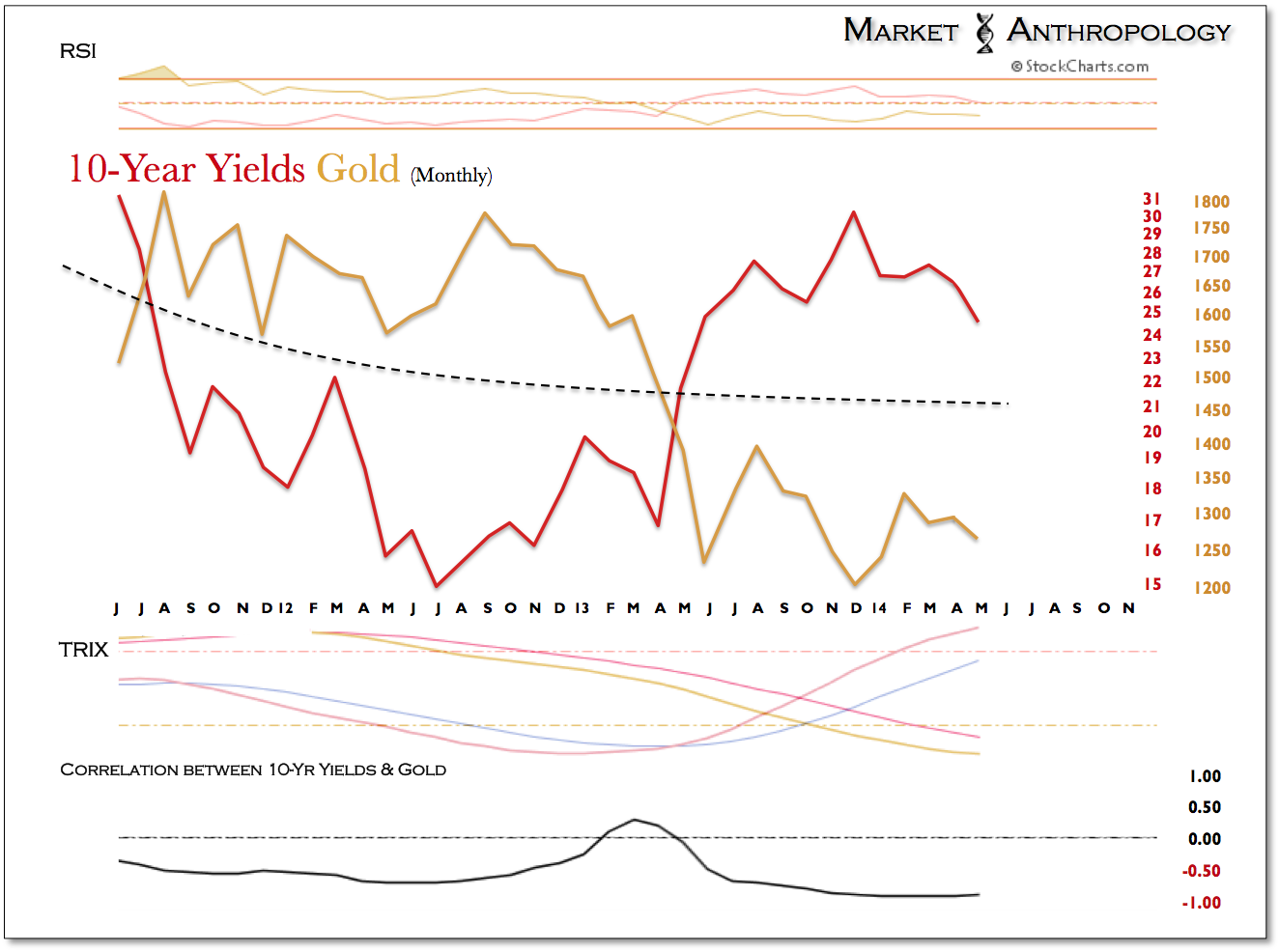 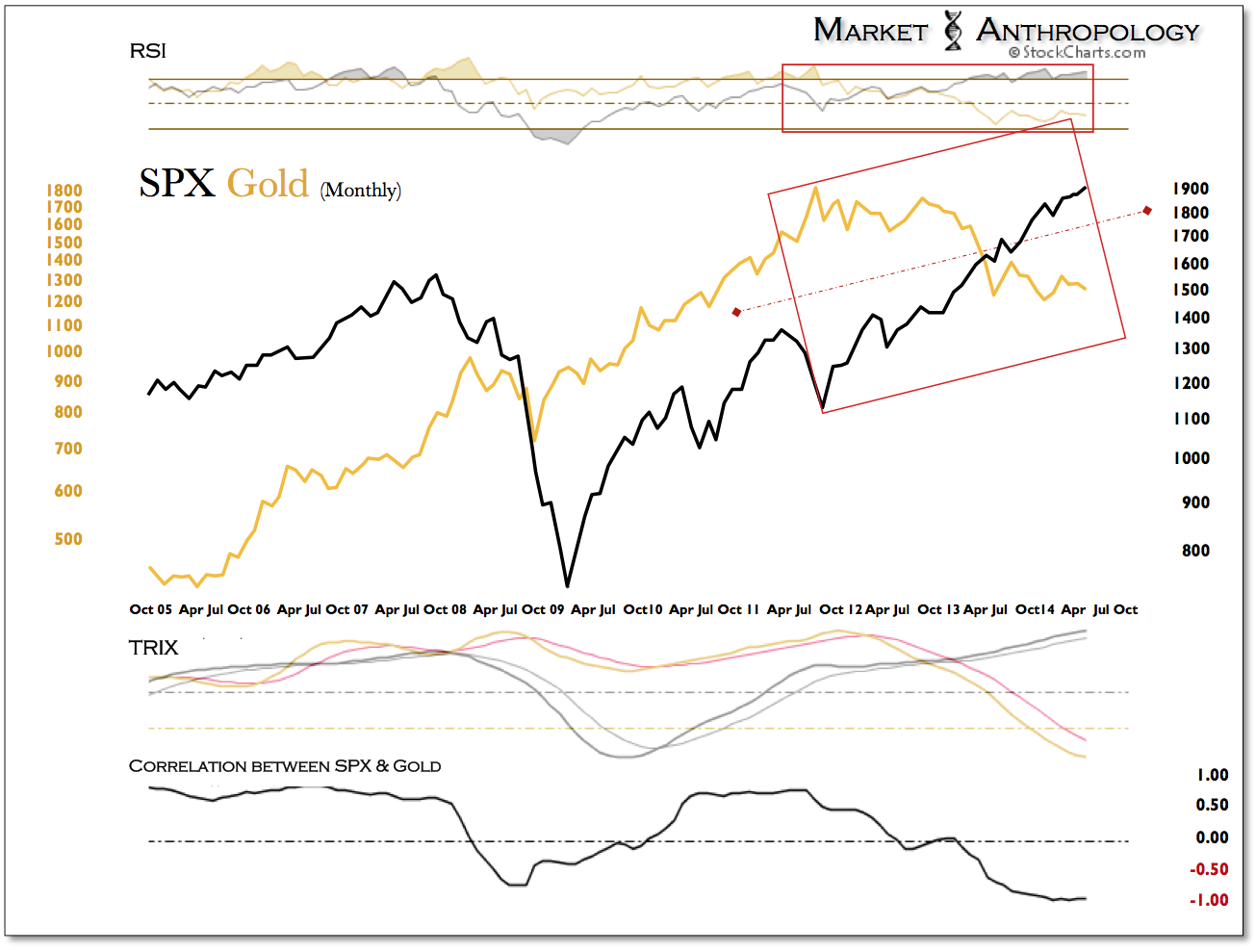 Speaking of symmetry and balance, the miners appear to be completing the backside of the cycle with as much complexity as the topside highs witnessed through 2010 and 2011. 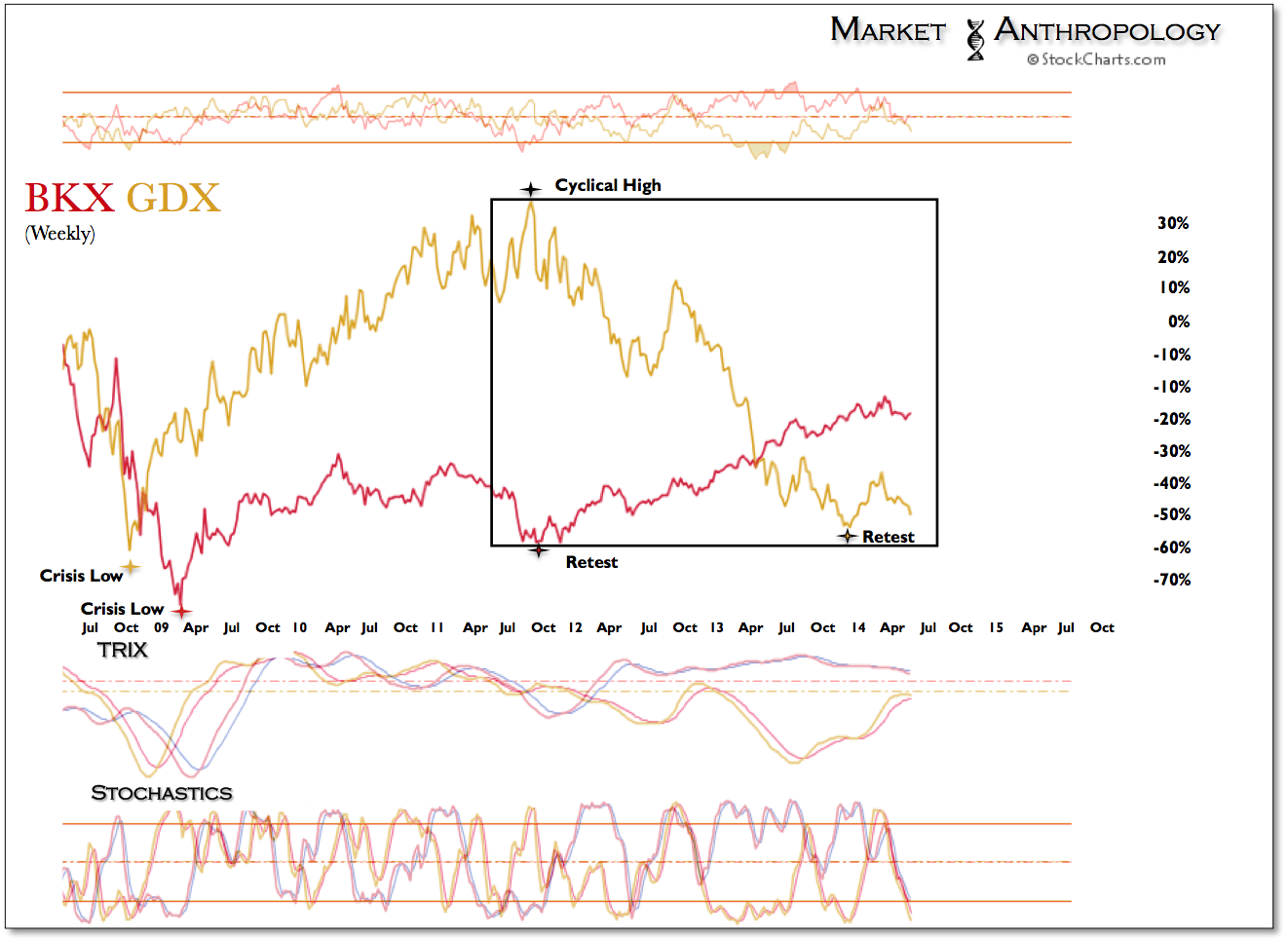 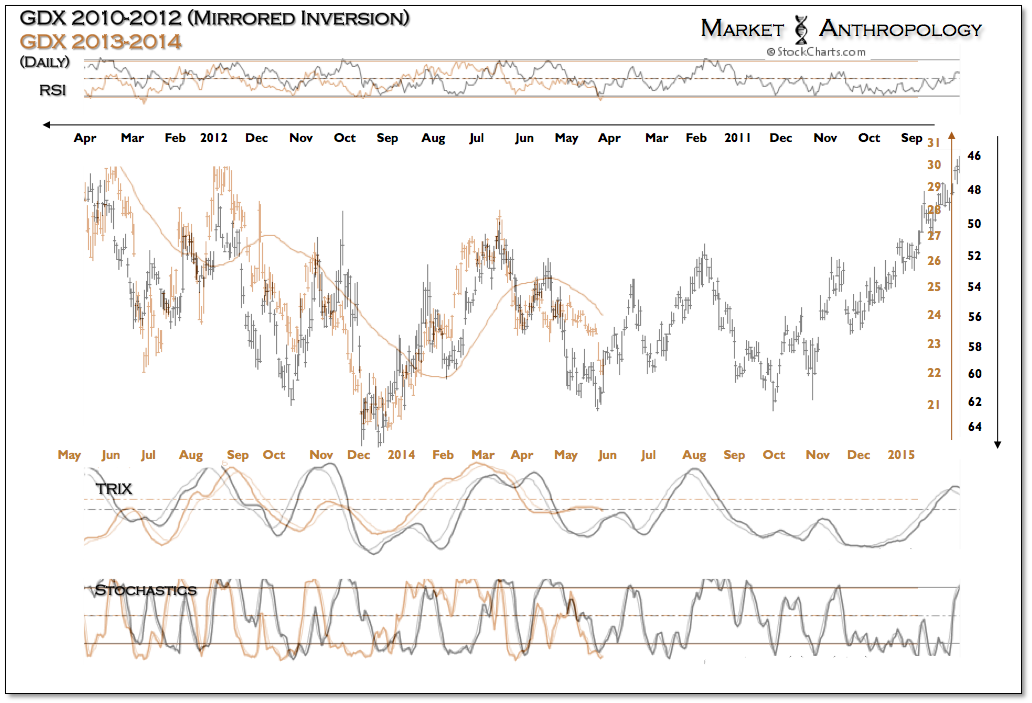 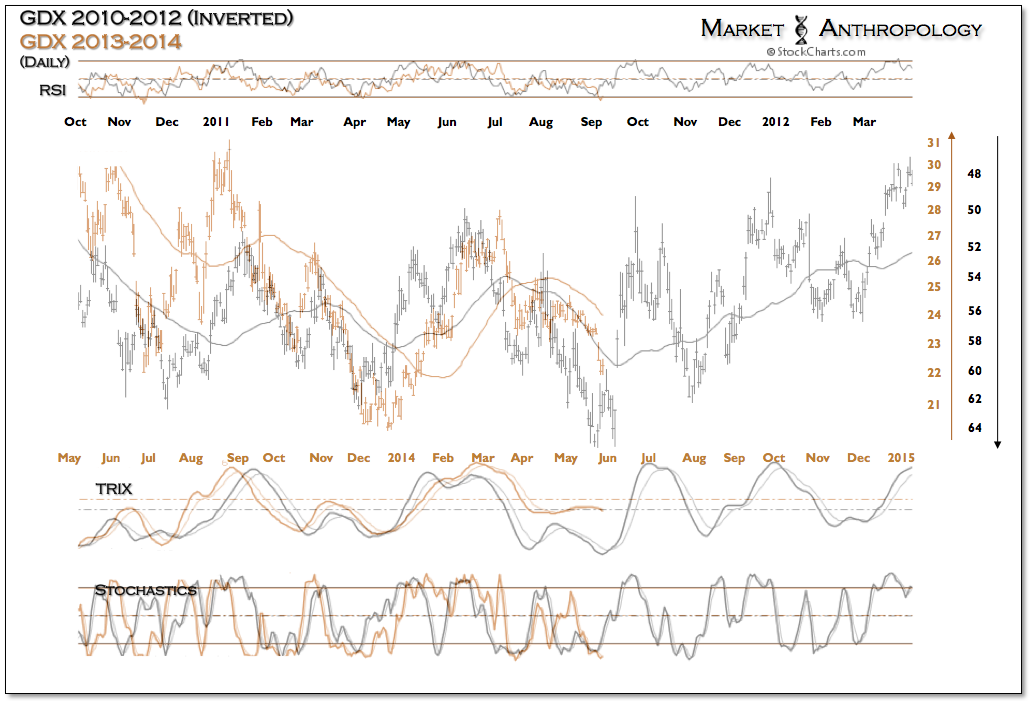 Our expectations going into next week is that spot prices will stabilize as the sector looks to complete the balance of its patterned range.

The euro ran rudderless this week as traders set their sights on next week’s ECB meeting in what could only be described as the monetary main event of the year. With so many expectations now riding on their hinted actions, the markets reaction to the news should speak as loud as their policy measures themselves. We maintain our view that the euro is a caged currency, jaw-boned into submission by its fire breathing monetary handler. Our remarks from earlier this month still stand. 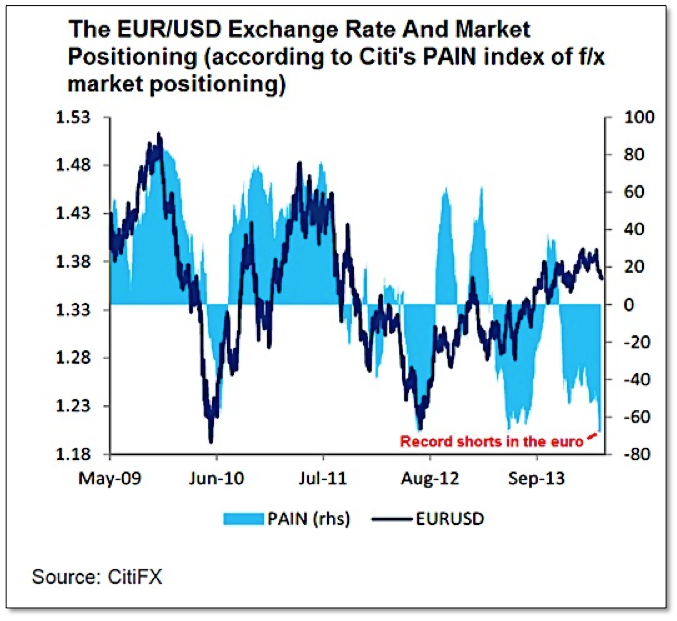 “Although we understand Draghi’s contractual agreements with jawboning the currency lower when he can, the truth is its effects are short-lived and the eventual breakout – should it come, more severe as the short-base grows increasingly entrenched.” – Puff the Magic Draghi

Conditions are ripe for disappointment for euro bears and dollar bulls as the currency pair sets sail into next week with a record cargo of short positions.

From our perspective, the euro is trading towards an upside resolution that mimics the comparative profile with another deflationary currency trend, namely the yen – circa 2003. 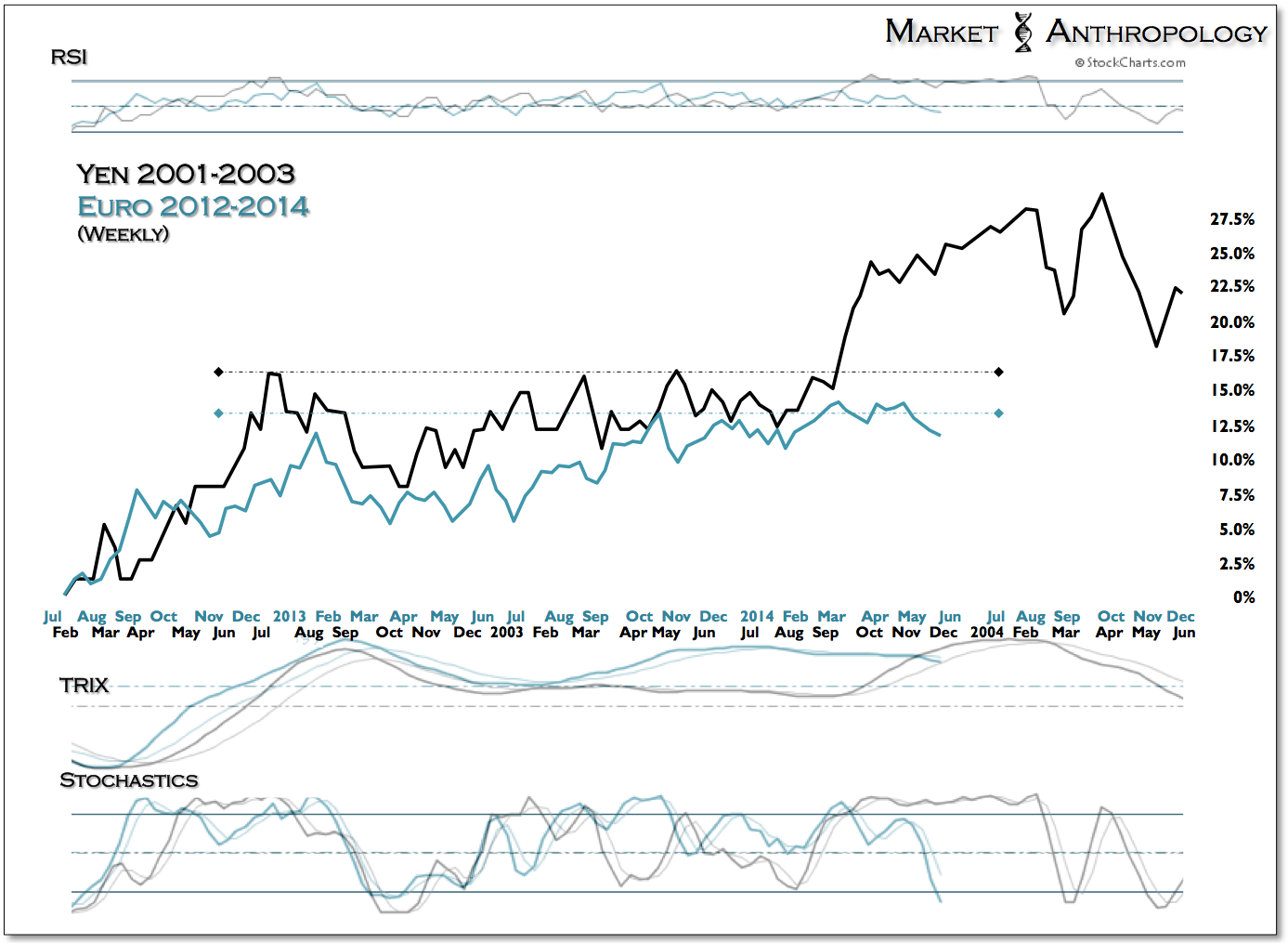 Although Draghi has succeeded to-date with maintaining a ceiling for the euro around 1.40,  we suspect short-term gains become long-term pains, as a sell the news reaction develops and takes out that resistance going forward. We pushed back the prospective breakout for the euro on the comparative series which depicts a similar momentum build and pattern that developed in the yen directly prior to its own upside pivot. 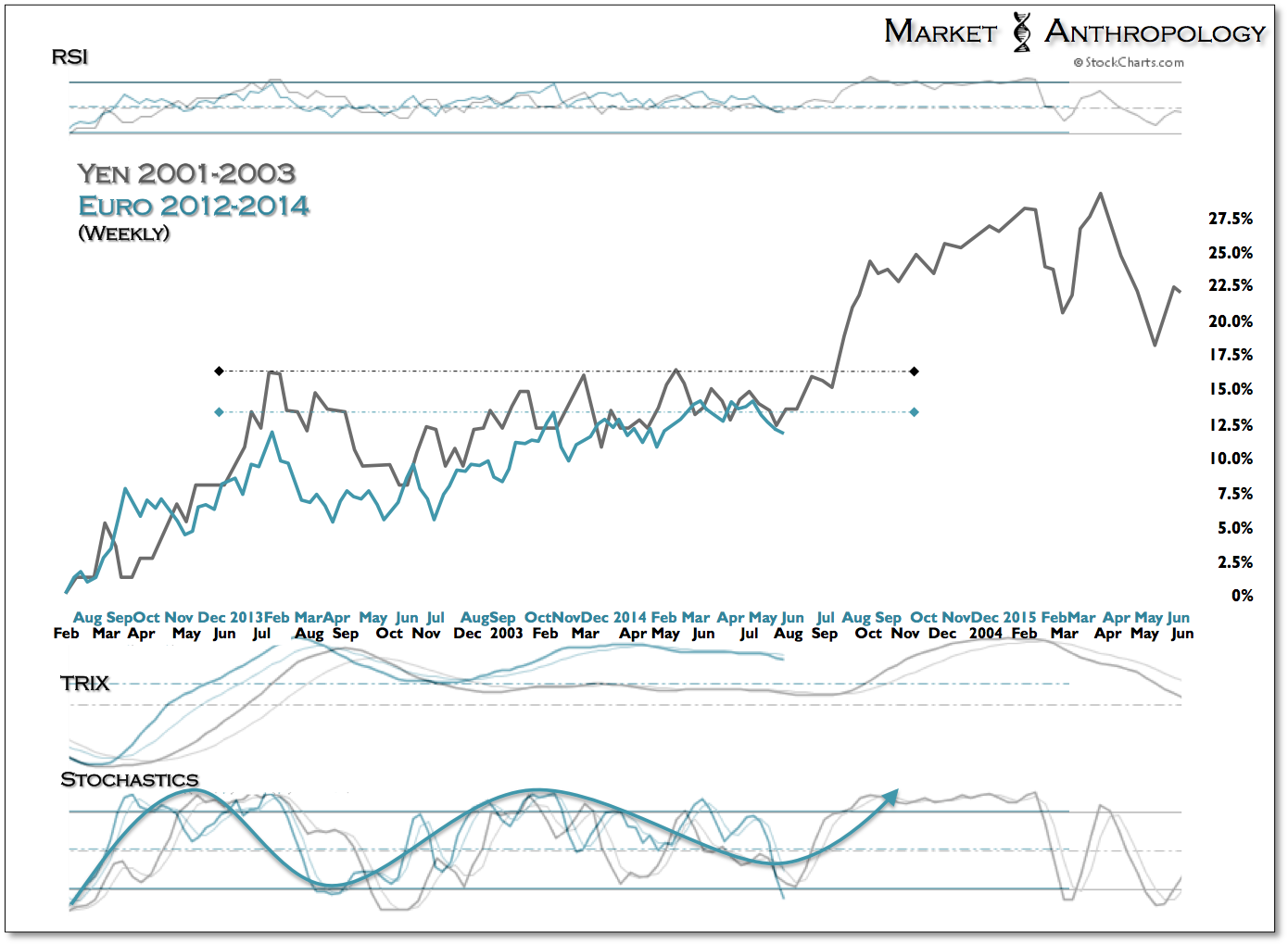 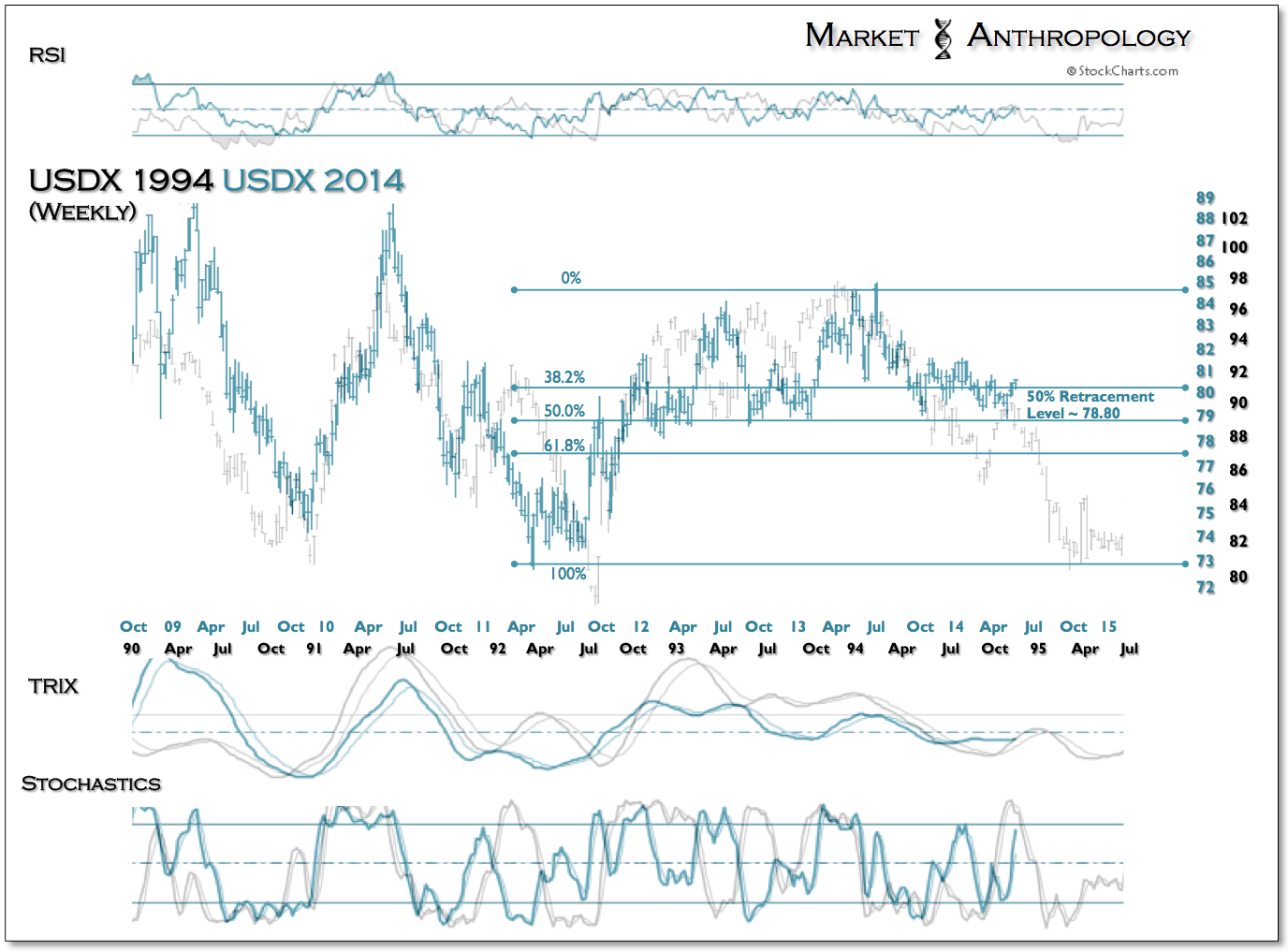 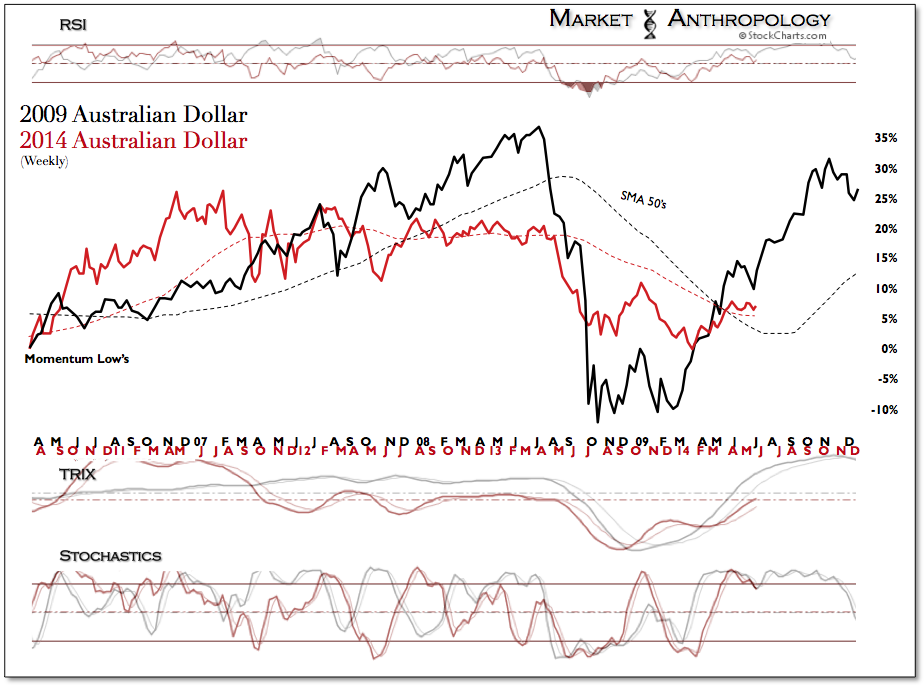 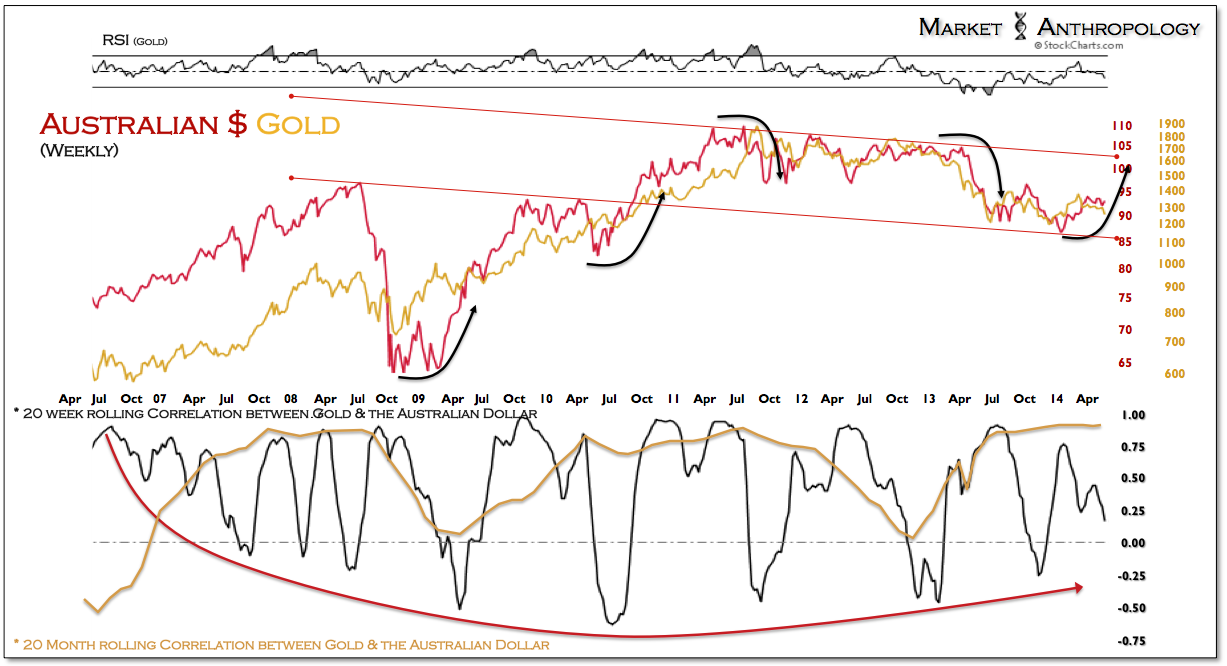 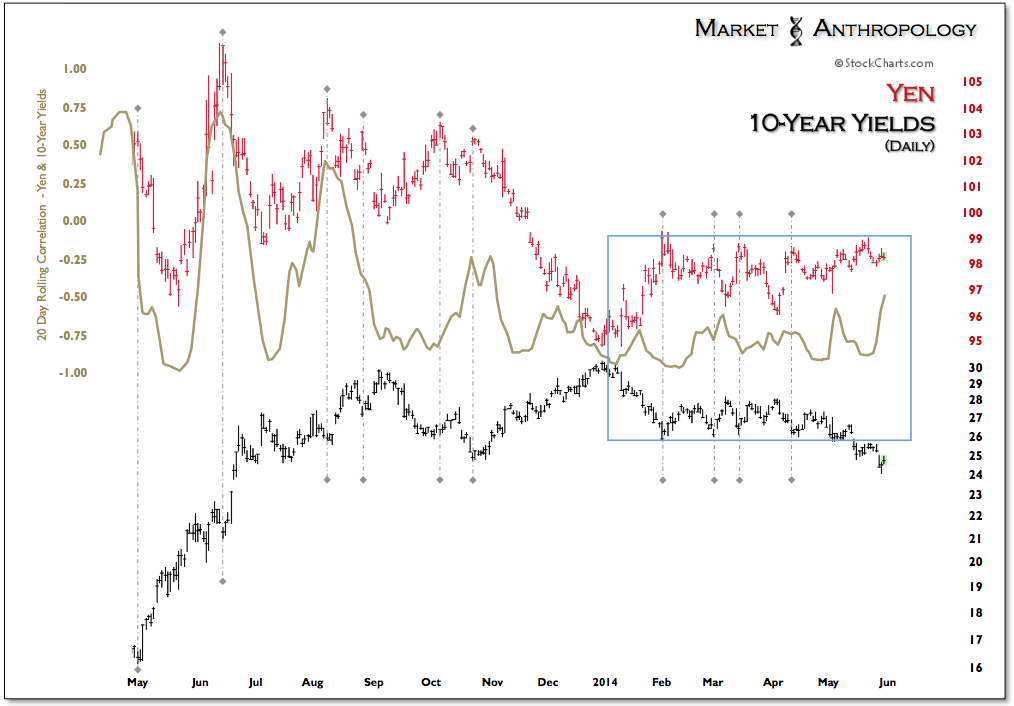 The Universe is built on a plan the profound symmetry of which is somehow present in the inner structure of our intellect – Paul Valery
at 11:51 AM