Mirror Mirror on the Wall

Over the past two decades, in the tumultuous annals of central banking lore, there typically arises a sweet spot of influence for many central bank governors. Some try and side-step the limelight – former Chinese Governor Zhou Xiaochuan comes to mind, and some run towards it – enter Alan Greenspan, circa 1998. For the moment, Mario Draghi appears to be selectively impersonating a bit of both. He has used the ECBs bully pulpit sparingly and tactfully to successfully jawbone the credit, currency and equity markets into believing in the ECB’s crisis response to date. An interesting contrast this week could be made between Draghi’s welcomed dovish comments by the markets in the face of a squeezed euro – to his predecessor’s (Jean-Claude Trichet) untimely hawkish comments in the face of a surging currency in July 2008.


Over the past several weeks I have illustrated in the weekly “ECB Hubris Meter” chart, the past three instances where atypical market conditions – invoked by ECB policies and postures, have momentarily squeezed the euro and caged the US dollar. This is strikingly apparent in the diminished correlation relationship between them – with this past window even exceeding the pronounced correlation drop that climaxed in July 2008.  All three have exhibited very similar price structures for the dollar and have marked an exhaustive high for the euro. It is my expectation, despite Draghi’s evolutionary adaptation of conveying the appropriate postures of price stability, that this past week marked an important pivot in the euro and perhaps a new chapter in Mario Draghi’s perceived influence in the markets through the carrot and sticks of monetary policy. Less we forget, it is his sweet spot and his own bureaucratic capital – as well earned as it may be, are seemingly priced to perfection here. 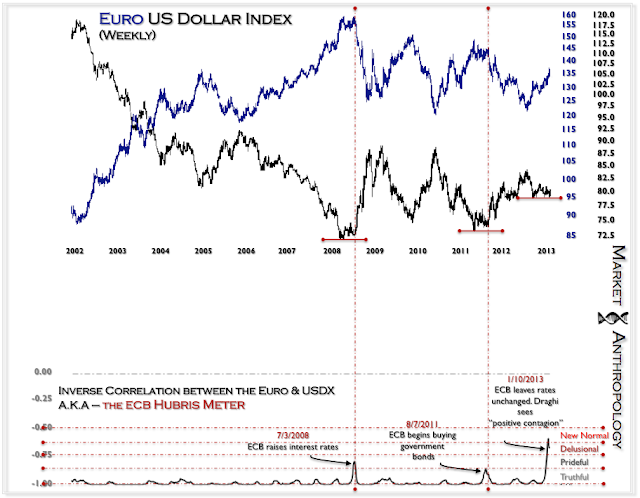 Outstanding of influence of President Draghi – as well as our own quantitative measures undertaken by Chairman Bernanke, the US dollar index appears to have broken free of its cage and filled out the proportions of the pivot of its previous secular low. 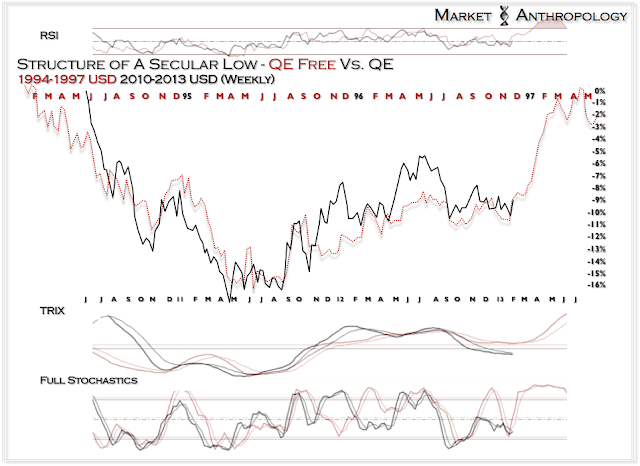 Presented with one foot in the theoretical, the euro appears to be completing a mirrored top of the May 2011 pivot high and the bookend of the last time the ECB had a pronounced influence of the EUR:USD dynamic in August of 2011. Although the 2011 chart is flipped on its axis, the chart has great symmetry and balance – both in price structure and momentum. You will notice that momentum and structure within the top and sides remain congruent (with the exception of a mirror on the TRIX momentum profile) – with the side entrances and exits to the topping structure exhibiting mirrored momentum profiles. 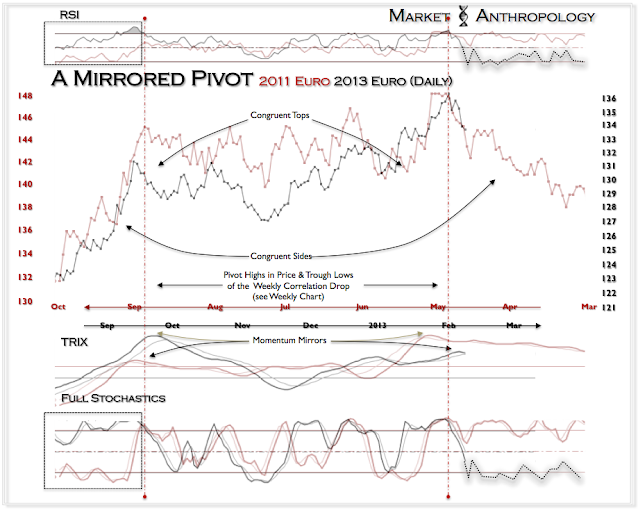