When it comes to analogies on the market, the father of value investing framed it best:

Within our own research approach, we often compare and contrast different market trends with respect to a wide scope of history. Like Graham’s observation, we’ve found “weighing” a trend with various metrics against the scales of history provides greater depth and perspective. For us, history provides identity for the present through congruences and contrasts with the past. And although the past is never a perfect fit, the weight of historical trends and their given market environments provide ample insight to help us better understand the markets we participate in.

That said, comparative reasoning is certainly no crystal ball – just as last years earnings or economic data doesn’t deliver present and future outcomes. What they both can provide is context – and a framework against which we can attempt to quantify and qualify the present. Stepping down from the soapbox – but keeping Graham’s analogy in mind, we thought we would update some charts on Europe and Japan as well as flesh out a few thoughts on related trends.

Our higher beta equity proxy for Europe – Spain’s IBEX, continues to walk the tightrope of our historic comparative of the two major perennial asset deflations over the past century. As we laid out in previous notes over the past year, the ECB is attempting to break the glide path of where a cyclical downturn appeared and where deflationary forces caused a policy misstep on behalf of their respective monetary handlers. 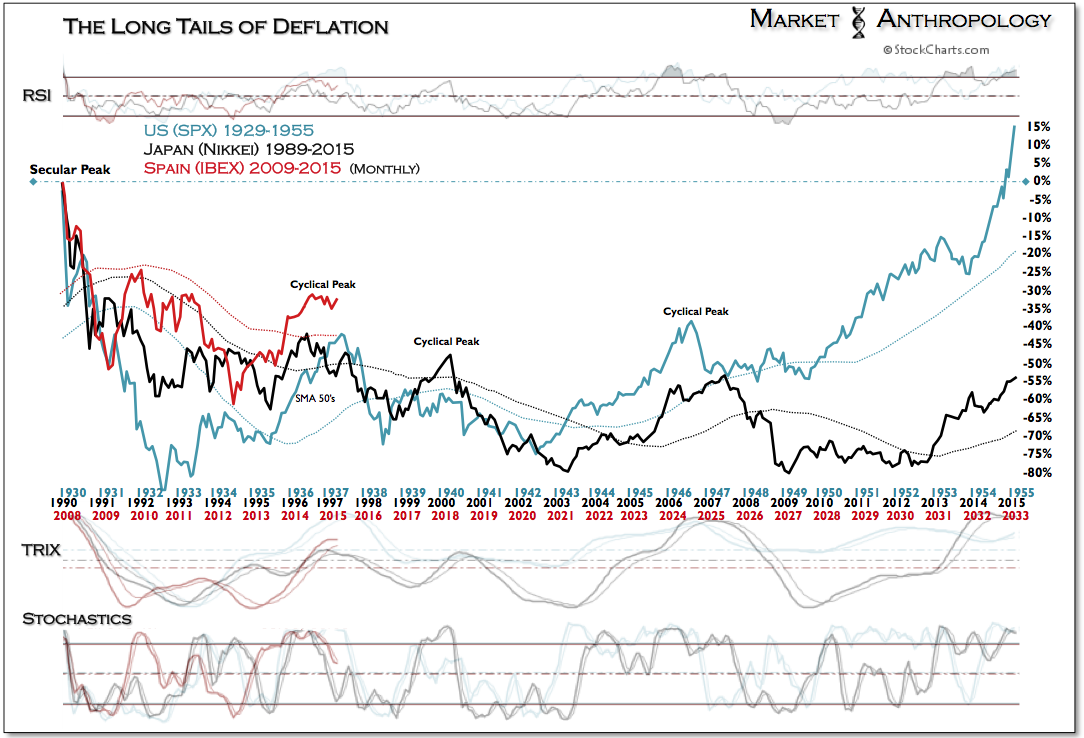 In both of these previous examples, the U.S. in late 1936 into early 1937 – and Japan in 1997, the powers that be worsened economic conditions by tightening monetary and fiscal policy, where they likely should have eased. While it’s readily apparent that the Fed’s European counterparts took their time in loosening policy over the past several years, the actions by the ECB over the last year runs antithetic to what the U.S. and Japan placed on their markets at comparative periods.

That said, from a long-term perspective momentum still appears to be rolling over in Spain where cyclical tops were made in the U.S. in 1937 and Japan in 1997. 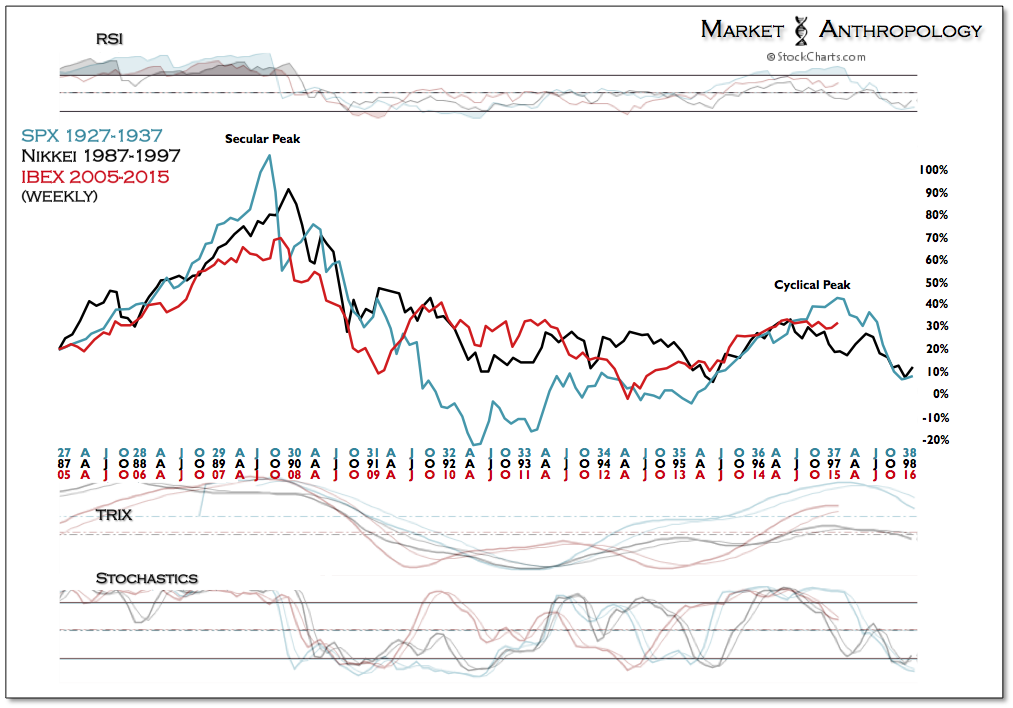 Moreover, it’s important to note that while hindsight provides historians with a more binary outcome to deduce causation and fault lines, the reality is that market trends within deflationary conditions have brittle underpinnings with an increasing degree of difficulty to navigate with policy. We find this is very much the case in Europe as brush fires continue to flare as the respective authorities juggle a disparate ledger of crises – both existential and structural in nature. In many ways Draghi is truly the Man on Wire, with what appears to be a long way to walk over the next year. 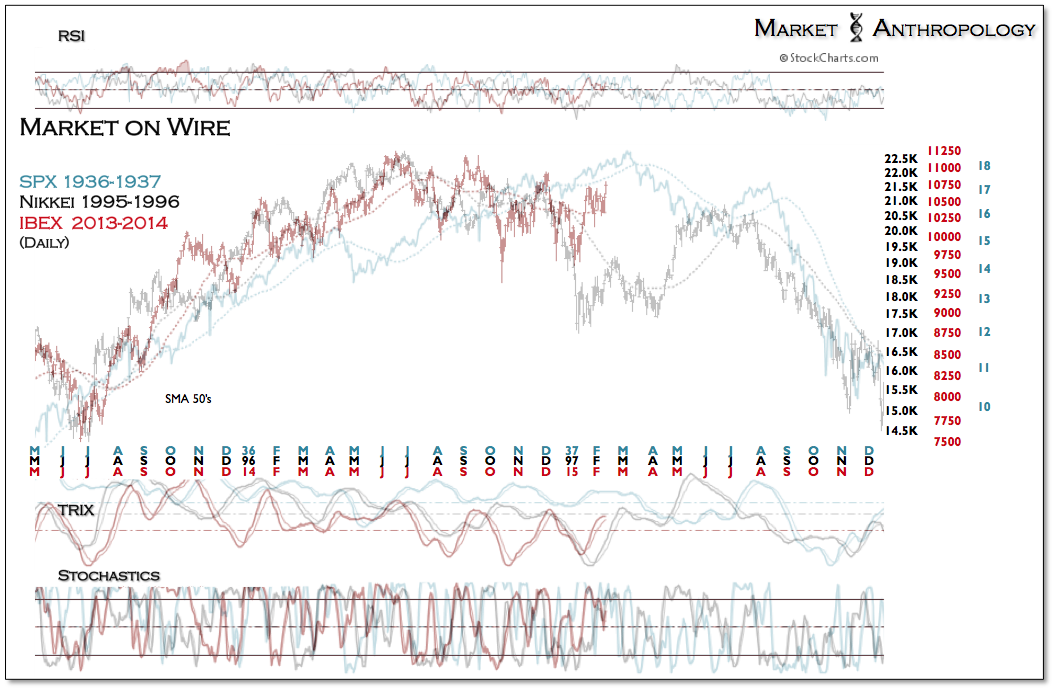 Although it took  Japan nearly 25 years to crawl and stumble across its own deflationary span, it appears the Nikkei has succeeded and continues to put more space between the breakout we expected last fall.

We updated our 1987/1988 Nikkei comparative that we’ve utilized since late 2013 and normalized a weekly study for duration and performance from the respective retracement high/meridian rejections. As shown below, the Nikkei is breaking higher around where its historic comparative pattern began another large leg higher. 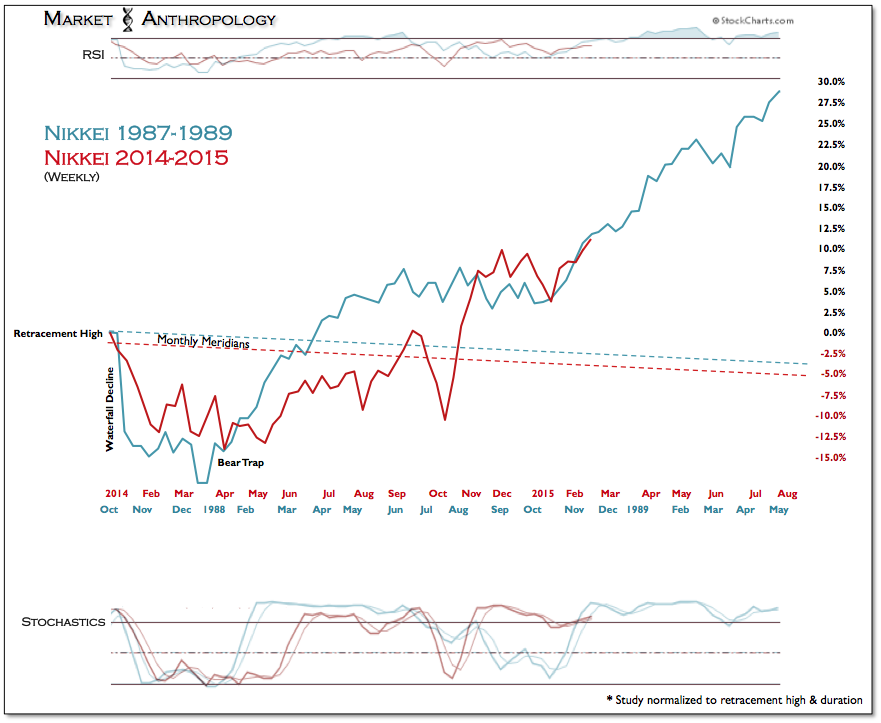 Over the past year, we’ve also followed a similar pattern that replicated in the SPX at previous meridian rejections in the U.S. in 1987, 1994 and in 2011. On each occasion, the low offered investors an excellent buying opportunity as the bears became trapped following the violent waterfall decline. We updated and normalized a weekly study for the most recent SPX pattern in 2011 for duration and performance from the respective retracement high/meridian rejections. 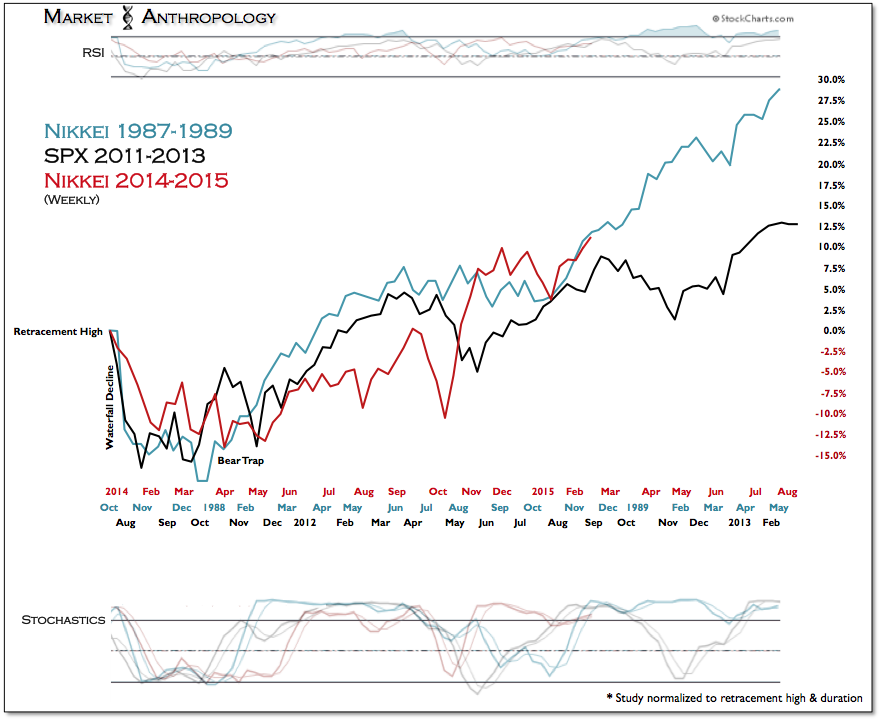 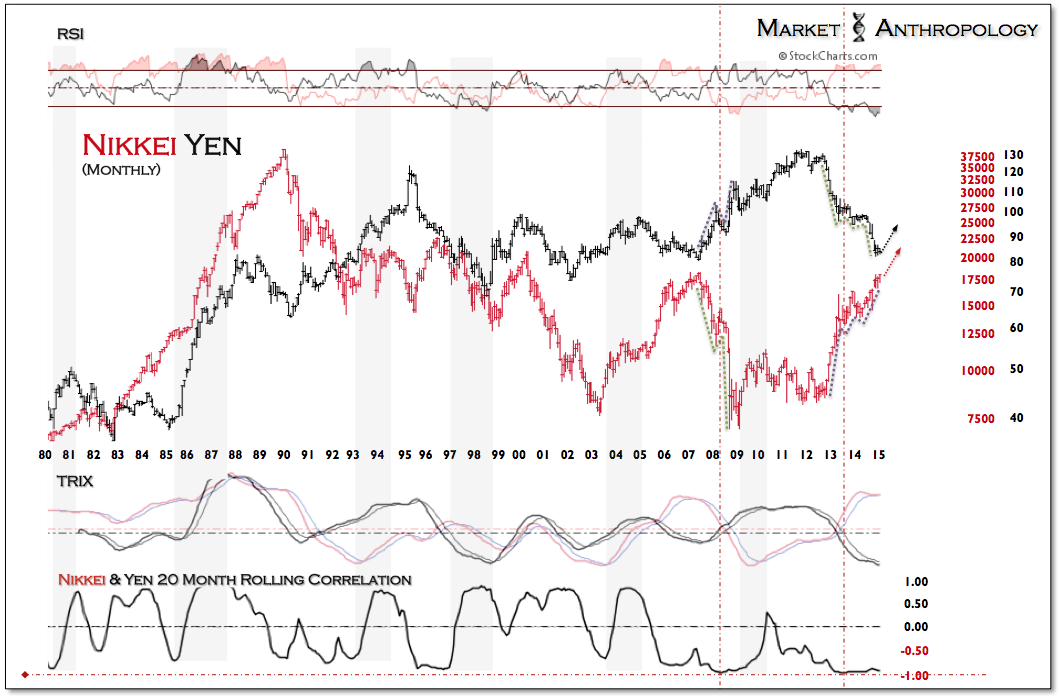 With consideration to the prolonged correlation extreme, unlike its corresponding equity market that broke above long-term resistance, we expect the yen will find support here and trend higher with the Nikkei – as well as with precious metals which have also led the pivot since early November. 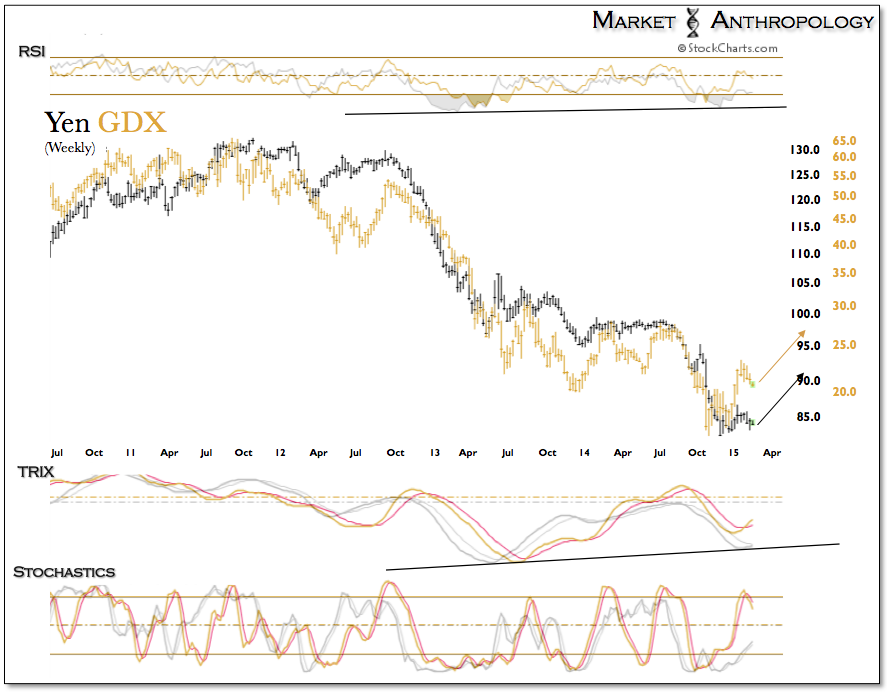 For those that have enjoyed powerful equity exposure to Japan through Wisdom Tree’s novel currency hedged ETF – DXJ, a shift to iShares EWJ may provide superior returns in the next leg as the correlation relationship between the Nikkei and the yen looks to revert from an extreme.