While the perennial skeptics popped their heads out earlier in the week to again profess their disbelief in gold’s performance, supportive macro conditions behind the nascent and discreet bull market in precious metals continue to advance. 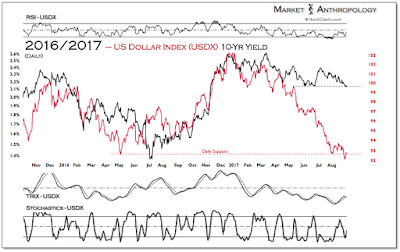 Namely, the linchpin of future inflationary pressures – the US dollar – remains heavy just below long-term support, while longer-term yields also flirt with an interim breakdown of their own below the lows from late June. Should longer-term yields continue to follow the dollar’s lead, the downside range extending from the post-election breakout in November will likely be retraced. The net effect downstream will be that real yields should continue to decline, providing more favorable market conditions for non-yielding hard assets like gold to outperform.

Although contempt for gold still remains with a deep scar from the long cyclical bear market in the face of what was perceived by many as exceedingly beneficial market conditions – i.e. massive QE (a few of our takes back then – see Here, Here, Here & Here), the precious metals sector has outperformed the S&P 500 since their respective cycle lows in late Q4 2015.

Since setting another retracement low in early July, precious metals have strongly outperformed as the US dollar index made its way back down to the lows from last year. With the dollar index breaking through those lows on Monday, gold took notice and broke above its yearly range and beyond $1300/oz. 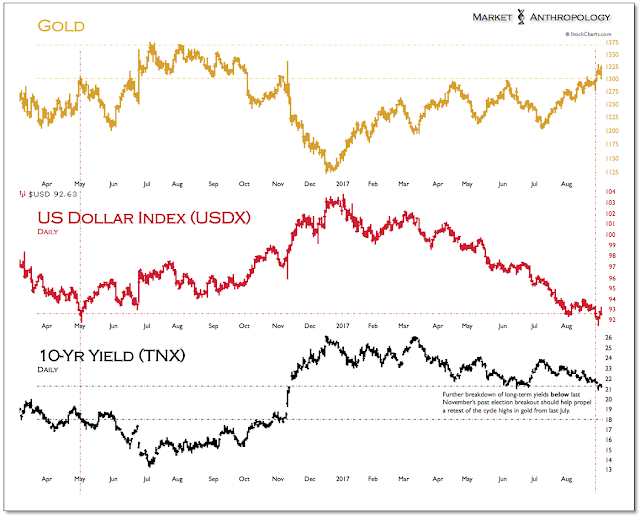 Squawking with the gold grizzlies this week have also been the downtrodden and dogmatic dollar bulls, which found fresh inspiration by the daily reversal below long-term support in the US dollar index on Tuesday. While sentiment did appear to reach a negative extreme heading into the week, that pressure valve has now been released with the dollar index still flirting below long-term support at 93.

Although technically an upside reversal again above long-term support could shift the tea-leaves in favor of a more sustained dollar rally, as we described in our previous note (see Here), the pronounced negative momentum structure in the dollar lends favor – in our opinion, that a continuation lower below long-term support will unfold.

Taking a closer (60 minute) look at our dollar/gold comparative that contrasts the current dollar move with the breakdown in gold from the flip side of the inflation cycle in April 2013, gold did initially break below long-term (weekly) support, before briefly snapping back above and setting another large bull-trap across a few sessions. If our memory serves us right (see Here), the move caught both dogmatic gold bulls and opportunistic counter-trend traders off guard right before the floor fell out. Food for thought. 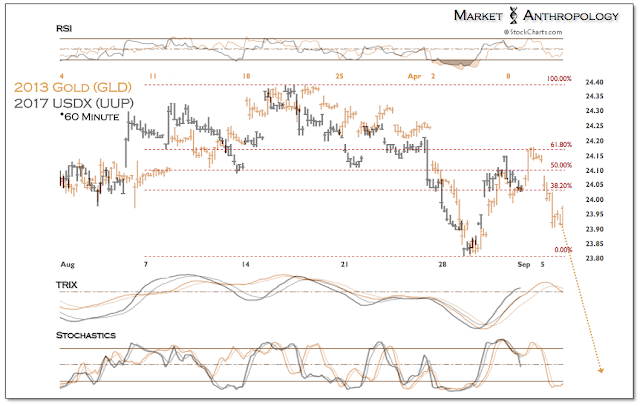 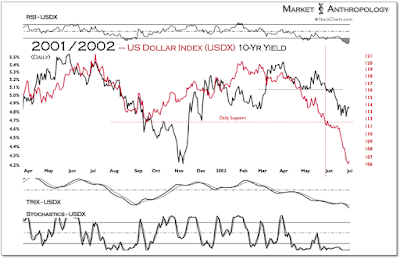 Rounding out our comparative reasoning is through the lens of the cyclical turn in the dollar in 2002, which as we alluded to in our most recent note, exhibited a positive correlation extreme with long-term yields as well. Although we are less inclined to be on the lookout for new cycle lows in the 10-year yield this year, the post-election breakout range looks ripe for retracement. All things considered, the backdrop for fresh cycle highs in gold this month looks very encouraging. 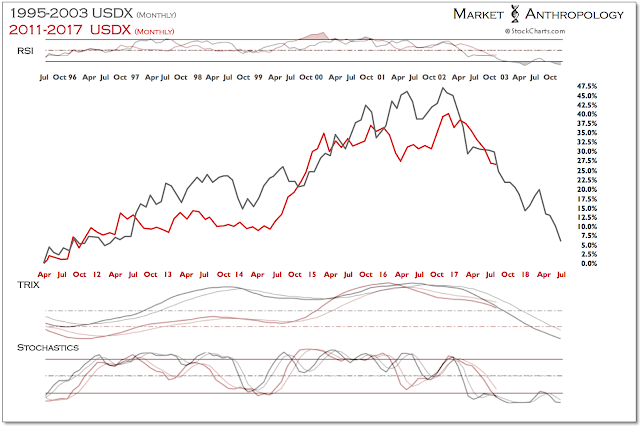 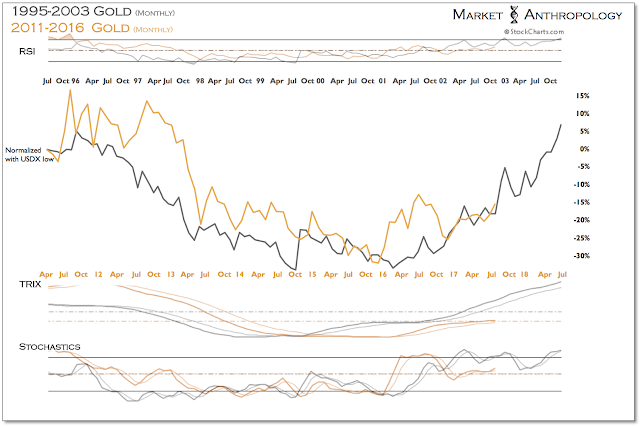 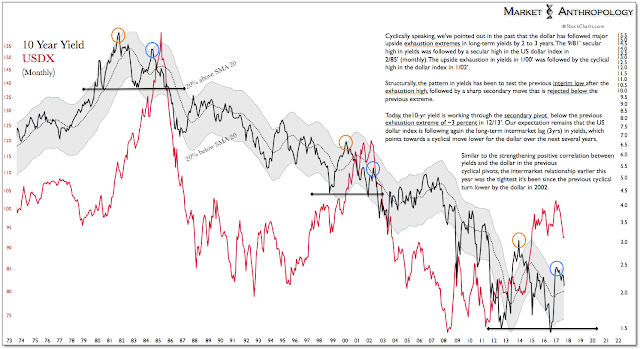 * As a postscript reminder to ourselves – remarks composed with this degree of hubris often age poorly.
at 12:04 AM