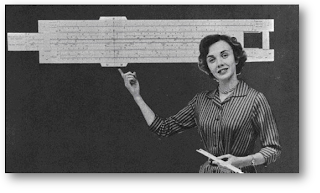 As I mentioned in my previous notes, I interpret the markets through a variety of sliding scales within my research. I thought I might construct a bit of the broader scale to color some of my longer term rationale – which continues to be constructively bullish. I have always appreciated the elegance of charts because for me they contextualize market conditions better than conventional description.
Perhaps it’s just my impatience.
I do believe the more than decade long commodity bull market is drawing to a close. While although that is historically brief compared to the previous three (averaged approximately 17 years in duration), when market conditions that have supported the cycle abate – its number is up. The following two charts make that argument rather strongly.
The CRB index is exhibiting very similar price structure to the end of the last commodity cycle as described in the historic commodity chart from Hackett Financial Advisors. In fact, this cycle has yielded the steepest and quickest rise in commodity prices in the past 200 years. It is loosely the same argument I described against silver (Y2K=QE2).
As in 1983 we appear to be putting in the right shoulder of the head and shoulder top for the CRB index. The Hackett chart has a different weighting than the more energy-centric CRB index. Interestingly, this dynamic is congruent to technical conditions in 1983. 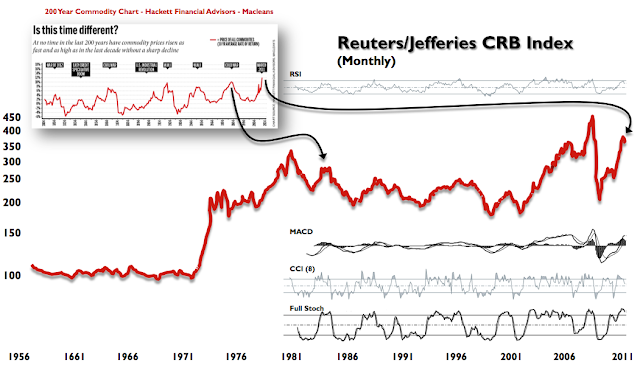 The dollar continues to follow the early 1980’s bottom. The market will eventually break loose of the inverse correlation that has existed between the SPX and dollar since 2003.
It has in the not too distant past – it will again overlap in trend. 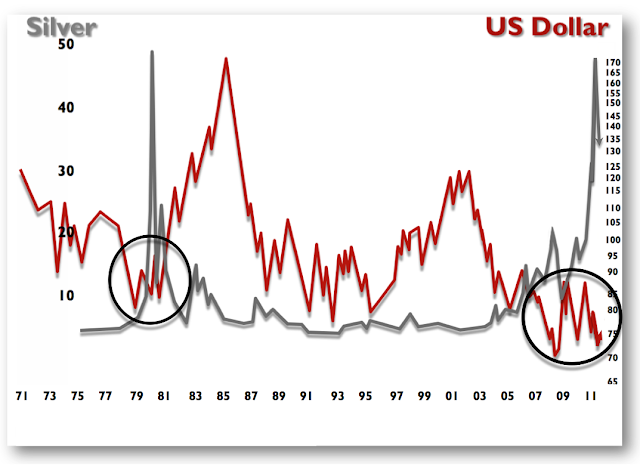 As we approach the end of QE2 and embark on a transition (granted likely glacial) to what should become a less accommodative monetary policy – I reference my The Congruent Market Theory. 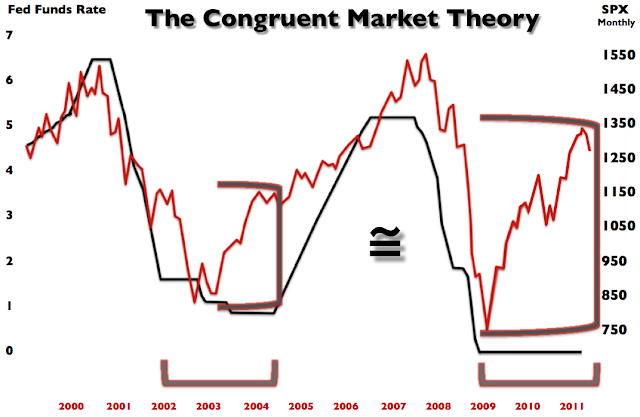 Considering that in the past decade we have experienced our fair share of the boom and bust cycle, I like to look at a market that was not disproportionately weighted to those two sectors (technology & financials). The Russell gives you that view because of its micro-weighted slices across the broad economy. While although there were serious retracements in the past, the long term secular bull market is still alive. That is plainly represented in the long-term chart by higher highs and higher lows. You will find the same price structure looking at the MSCI Word Index.
I tend to stay away from the semantic debate over secular and cyclical markets, because in most instances they have allowed traders and investors dogmatic cover that typically wasn’t warranted to the same degree they expected.

These charts represent components within my longer term analysis. The next series will be constructed using the more agnostic view of the short to intermediate-term.
___________________________
I just joined Twitter. All my trades and occasional market musings are disclosed in real-time here.
(Positions in TNA & UUP)