It’s Different This Time… but it’s Happened Before 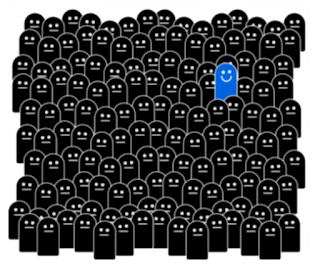 For someone carrying a dogmatic bent of the bearish persuasion, there’s always conditions somewhere that can fill the narrative. Liquidity provisions, leverage, breadth, global macro developments – the list can go on and on and there’s plenty of sites that cater to these concerns or prey on participants more primal fears. Then again, cognitive biases are routinely applied on both sides of the tape, regardless of team. The truth, however, is in the long shadows cast since the financial crisis, participants are still greatly vulnerable to strong recency biases and likely to assume the worst. This is why today the most frequently cited equity market parallels are made to conditions in 2007 and 2000 – or the catastrophic declines of 1929 and 1937. When it comes to equity market analogs, its easy to invoke the ghosts that have haunted us the most.

The problem, however, is – it’s different this time.

No, not that kind of – different this time. Rather, the disconnect that’s existed for years from ZIRP and QE – between the markets and the underlying economy, lends itself to even rarer historic comparison – and this applies to everything from Fed tightening cycles, to recessions and inverted yield curves, but also to future equity market returns and the data miners that like to dig in between. It’s dangerous to the extent that it could break long standing conventional market wisdom on both sides of the field, which in the end could leave participants and strategists wondering which way is up and how to position a portfolio, with few historic parallels to draw from. The bulls would be hoodwinked by waiting for the typical bear market catalysts (i.e. a downturn in the economy and inverted yield curve) and the bears would eventually bite off more than they can chew by following the aforementioned market cycles with expectations of a 50 percent or more market decline.

Like most things, we believe the truth will eventually be found somewhere in the middle and feel both outcomes are unlikely today because of what ZIRP and QE provided the economy and markets.  All things considered, we still find the closest market and policy parallels to the previous trough of the long-term yield cycle of the mid to late 1940’s, where the Fed began normalizing policy after providing extraordinary support through the Treasury markets between 1942 and 1946.
– Click to enlarge images –

In Milton Friedman and Anna Schwartz’s – A Monetary History of the United States, the market climate in the 1940’s was described as being so suspect of the Fed and Treasury’s visible hand, that even after a 150 percent rally in the equity markets that began in 1942 – went through a recession in 1945 and exhausted around Memorial Day in 1946; participants by and large didn’t trust the market or expect inflation to rise as precipitously as it did from the trough going into 1947 and 1948.

“Despite the extent to which the public and government officials were exercised about inflation, the public acted from 1946 to 1948 as if it expected deflation.”

Today, as investors grapple with the more esoteric nature of monetary policy enacted in the trough of the long-term yield cycle, we believe a similar fate awaits the equity, commodity and Treasury markets as the Fed looks to further normalize policy. On one hand, the stalwart strength extended to the equity markets on the back of the Fed’s extraordinary policy support – and which to a large degree suppressed equity yields and commodity prices, is likely in the markets rearview mirror. On the other hand, those policies should go a long way towards smoothing the transition in the economy as it works its way across the transitional divide between growth cycles. The net effect, we believe, should allow the US consumer and households greater traction in the economy (i.e inflation), even while US equity prices decline from what we perceive to be a valuation ceiling extended by ZIRP and QE and which ultimately should buttress the Treasury markets – as it did in the 1940’s, as many market participants feared the worst and took shelter in bonds.

A potential equity market set-up from our often cited 1946 cyclical top, may be finally getting ready to “set the hook”, as participants brace for a future rate hike from the Fed this fall. Should the historical guideposts prove prescient, downside support in the equity markets will fail over the coming weeks, opening the door to the first material correction in US equities since the summer of 2011.

Assuming the correction materializes, whether the Fed choses to act in September – subsequent to a market development such as this, obviously remains contingent on the magnitude of a potential dislocation and its broader kinetic impact in the markets. That said, based on our research of the long-term yield cycle (see Here & Figures 4-6), we have always believed that the Fed’s latitude to tighten would ultimately be limited by developments in the market and the economy’s capacity to carry the burden of higher rates (seeHere).

Cyclically speaking, from a top down view of the long-term yield cycle (Figure 1) – as well as the reach of equity market valuations (which we’ve argued are greatly driven by rates disposition within the cycle), we have approached the 1946 cyclical peak in equities as the closest market and policy environment with today. From a historical perspective, the trough of the long-term yield cycle in the mid to late 1940’s, where the Fed began to normalize policy after extraordinary support was extended in the market with significant Treasury purchases by the Fed between 1942 and 1946 – remains this cycle’s mirror equivalent.

As such, since the Fed began to normalize policy through the taper last year, we have panned the longer-term prospects of the US equity markets and largely viewed them pushing up against another valuation ceiling, similar to what transpired in 1946 (Figure 2) as accommodative policy support was removed.

While a potential downside pivot will invariably make its own distinct path (Figure 3), from our perspective, the risks of such a decline have not diminished and now appear to be preemptively butting up against the Fed’s starters gun – that may or may not go off.

While we would once again emphasize that markets will invariably make their own distinct path – as they have this time around; over the long run we expect market conditions between bond and stock yields to return to where they perennially resided for over a century, until the previous long-term growth cycle kicked into high gear as the 1950’s came to a close. 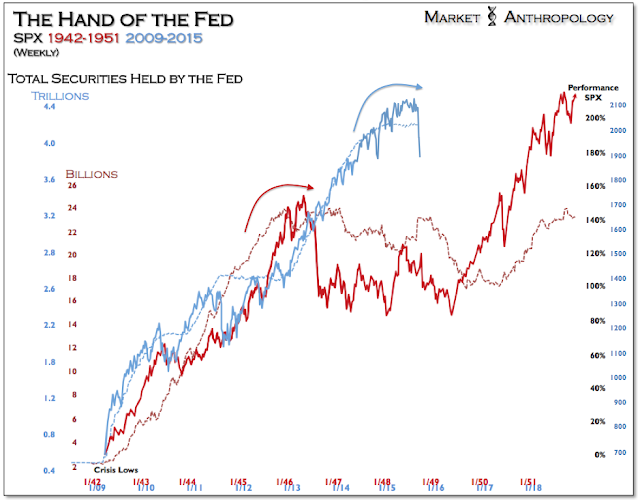 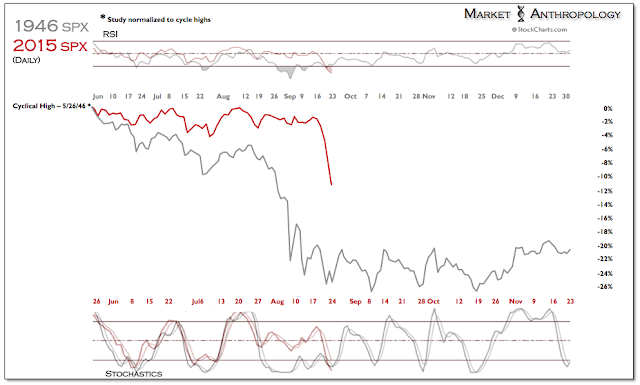 If one was to mine the data, in the three previous occasions where this had occurred, equities rallied sharply over the short-term and strongly performed over the next year – quickly closing the aberration that represented a particular extreme between these two markets.

That said, we would strongly caution anyone looking for similar returns or bolstering their respective equity biases with this fourth occurrence. From our perspective, the fourth time may be the charm as these two massive trends pass quietly in the night, ending an epoch that first set sail in 1959 as Treasury yields began their long and steep journey to a secular peak in 1981.

With the hook now set in equities and for just the fifth time in the last fifty years – but second time since January: the S&P 500 once again yields more than the 10-year Treasuries. From our perspective, the brevity between these signals should be a warning shot for those data miners looking for more contemporary context of longer-term bullish significance. While the SPX rallied 6 percent over the following month through March, these markets will continue signaling through this long-term passage, as we suspect any retracements to be even shallower this time around, as these two immense ships pass quietly in the night.