Hyperinflation! no not really…

Things can get awfully confusing when traders – or worst – pundits throw around phrases laced with inflation. It doesn’t stop them from using blanket connotations that would be as appropriate as me describing physics as, “a subject in science.” Inflation is a complicated and nuanced phenomenon that for many Americans is appropriately anchored to their hardship memories of the 1970s. I say appropriate, because the 1970’s were a period where both inflation expectations (i.e. rising interest rates) and commodity prices were surging in unison. Throw a volatile and stale equity market in for good measure and you have a rather unpleasant economic backdrop, that I could argue was even less forgiving and harsher then todays economy.
I would guess that most folks (even those associated with the markets) have a poor understanding of what is truly wagging the dog these days – because it is a rather unique environment that has been repackaged by interests on both sides of the aisle to fit their respective causes. To mitigate this misunderstanding, I contrasted the two historic charts of commodity prices and bond yields over the past two centuries that I resource from time to time.
As they say, a picture is worth a thousand words – or approximately 921 by todays standards.

Broadly speaking, inflation expectations are extremely low today, as exhibited in the historically low interest rate environment – while commodity prices have been exceptionally high. It is certainly not the inflationary spiral of the 1970’s, or even the Great Depression’s deflationary backdrop where both price and inflation expectations were falling – but the effects to the general public can mimic the root causes. If it was the 1970’s and we were on the ramp of inflation expectations within a secular commodity boom (as they were in early 1920’s Germany), I could even entertain the daily rants by the hyper-inflationistas against the backdrop of our Frankenstein monetary policies. But alas, we are in an inflationary environment that is most similar to the period directly after WWII – not WWI.
Interestingly, one equity market environment that holds close parallels with the current markets price structure is 1946. Tom McClellan (of McClellan Financial) had an interesting note out in September that described the similarities. I think it holds some utility – considering the volatile range we have experienced since August and the peculiar breadth effects described in the charts recently. 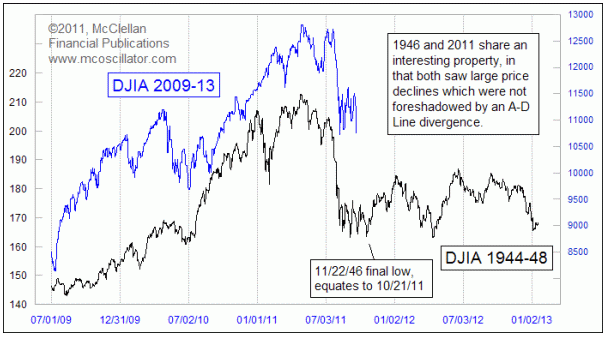 “We first took a look at this comparison back in August 2011 because of a common factor in each period: there was no divergence in the A-D Line.  Most of the time when there is a price decline as big as we have just seen, the A-D Line gives us warning of liquidity problems by making a divergent lower high as prices make a higher high.  We did not get that A-D Line signal in the summer of 2011, although other divergences did tell us (and thus our subscribers) that there was trouble brewing.
1946 similarly did not have an A-D Line divergence, and so that made it worth taking a look at as a comparison model.  When lining up the price patterns in a single chart, the correlation of price movements then and now became obvious.
1946 also shares other similarities with the current time frame.  The U.S. was in the midst of dismantling the stimulative effects of a war-time economy, and unemployment shot up in a big way.  There were also concerns about rebuilding post-war Europe, and whether or not loans would be repaid like the Lend-Lease Program.  Now we have an economy with high unemployment, and the expiration of stimulative efforts like TARP and QE1 & 2.  There was great labor union unrest in 1946, which led to the 1947 passage of restrictions on union activity in the Taft-Hartley Act, which passed over President Truman’s veto.  2011 saw a big push back against unions in states like Wisconsin and New Jersey.” 1946 Analog Holds Key For Current Market