As an independent trader, I begin each week by closely monitoring the underlying fundamentals of both the financial markets and the global economy. Where my research typically diverges from convention is when I then take that same top-down approach and apply a synthesis of pattern recognitions to isolate and scale historically similar price and momentum environments. Not surprisingly, although the catalysts and motivators between comparisons are more than likely dissimilar, the market reactions to various hopes and fears is quite repetitive. It is this self similarity and scale invariance of traders emotions that is presented within the charts, that can become a powerful intuitive edge to work and contrast from. It is by no means a certainty of future market expectations, but as I have presented over the past two years – a compelling analytical perspective to incorporate.
_____________________________ 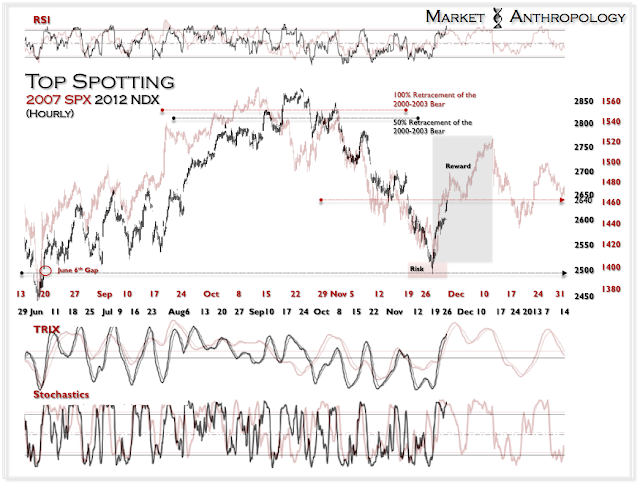 With that said, and in light of the SPX/NDX’s acute prescience over the past month, I added greater contrast with respect to the indexes performance, as well as a comparative between volatility – as measured by the VIX for the 2007 SPX and the VXN for today’s NDX.

As presented below in a daily series, both indexes have performed very closely over the given time-frames. However, the current market has expressed considerably less concern/fear when viewed through the VIX/VXN – than compared to the initial correction in November 2007. Although the VIX/VXN can be a more nuanced instrument(s) for comparison than price and momentum, considering the backdrops of the Fiscal Cliff, the ongoing issues in Europe and the slowdown in China – it is surprising how low the VXN, and tangentially the current VIX – is today.

In light of the ongoing issues the market has absorbed to-date, one could make the argument that courtesy of the perceived safety nets extended by our monetary handlers both here and abroad – participants have become far too complacent and desensitized to risks – as obvious as they may be. 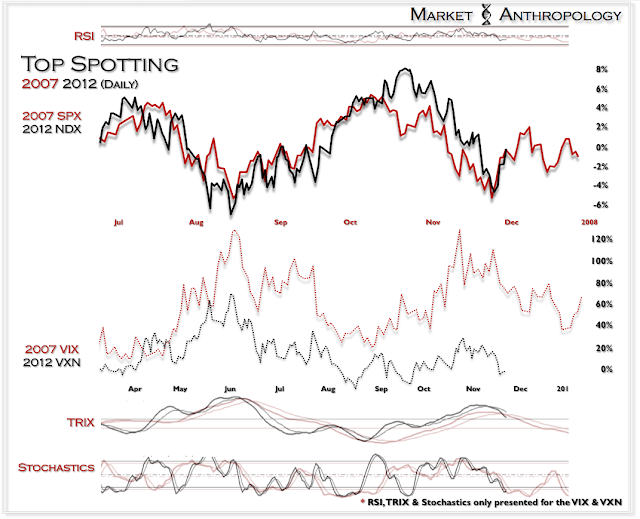 But have no fear, should the equity markets once again loose their footings, it is my suspicion that the negative divergence in price and complacency will likely resolve itself both swiftly and violently. For this reason, as well as my comparative work with the US dollar index and the Aussie – I am cautious going into this week after the market hit my initial target of 2640 on Friday.