As the pop favorites of the intellectual elite (typically a paradox of utility) debate the merits or lack there of in quantitative easing, I find myself asking the more practical, albeit selfish quandary:
Specifically, where will the market’s likely trade over the next several weeks?

Considering it’s the weekend and I’m feeling rested and lucid, I will don my most penetrating thinking cap and ponder.
…and ponder…
Truth be told, I have always approached market research, and by extension – trading, as a sliding scale examination. The markets are the most fluid real time abstraction of our civilization’s course. Heady stuff and without the least hint of hyperbole – they are the tip of the sword. As a market participant your strategy needs to cover a range of outcomes depending on variables that will inevitably change from week to week. When an investment bank’s leading technician comes on CNBC and declares he sees the S&P going to 1460 by year end, it is at best a snap guesstimate and at worst a severe misinterpretation of the tea leaves. While I can look at historic charts and make a general characterization that will hold certain weight, the daily and weekly reflexive nuance will inevitably make successful trading a moving target.
It happens every day as traders and investors absorb static and often constrained research that is limited by either a too focused perspective or data elements that draw from the rear view mirror. At Market Anthropology I like to take a synthesized approach that draws from a variety of perspectives across the data and behavioral spectrum. It is analogous to flying a plane utilizing a “partial panel” approach. Many technicians and traders rely solely on the instrument panel – ignoring what their senses could be alerting them to. This method works well during times where visibility is either constrained due to inclement market conditions or where the trader has lost their visible bearings of the flight plan altogether. However, a technician’s instrument panel can and will give misleading data bearings during atypical market conditions that the system interprets as normal. It is up to the trader to override the system during these conditions to ensure safe return.

This is where the art component of trading differentiates great traders from the rest of the field. In many cases, a professional trader’s qualitative instincts will trump a computer’s quantitative paradigm over the long run. Long Term Capital Management comes to mind.
Moreover, as market participants become increasingly reliant on research principals once utilized by the minority, you need to adapt the psychological aesthetic you set them against. If everyone is interpreting the data with corresponding conclusions, the market will very likely cause them to jump the shark en masse.
Forgive me if I am drawing out the obvious – it’s the thinking hat.
As anyone who has been following my research knows, I like to utilize various fractal studies in the development of my trade set-ups. It is how I came up with a target of $32 for SLV when it was trading at $48 a share the week before.  They can have merit as reference guides for price structure and emotion once you know what to look for and if you apply them appropriately (very difficult). Remember charts are merely the artifacts of emotion within the tape. Congruent market conditions will replicate and give an outline as to where the market will likely trade.
The 2007 analog was useful in coloring the throw-over top the market trapped the bulls in. My comments before about adapting your psychological prism is relevant to that trap. Traders jumped the shark during that breakout when other metrics such as the VIX or silver’s collapse should have alerted them to potential hidden risk – possibly systemic – within the system. I highlighted a number of those conditions in Taking Shelter.
In the immediate term, the degree of downside for the SPX will be dependent upon the arrival of another catalyst to introduce a bolus of fear into the system. To date, the VIX has yet to breakout to a similar degree as it did in the 2007 intermediate top. At this point that seems to hinge on Europe’s sovereign debt travails. With each passing week the various eurozone participants skirt the periphery of an ever shrinking situation room. Bill McBride at Calculated Risk characterized the situation as:

“Everyone is focused on June 20th when the 17 euro zone ministers will meet in Luxembourg. There is also a meeting on Tuesday this week (June 14th), although there will not be a press conference following the meeting. Someone will probably blink before the 20th.

So next Sunday might be the new Monday once again (like during the U.S financial crisis)!” Greece Update – Calculated Risk

Interestingly, that time frame works out rather closely with the intermediate term fractal bottom. I am suspect that the market realizes similar downside proportions of the 2007 analog. A likely worst case scenario over the short term (next month) would be a 61.8% fib retracement off of last summers low. 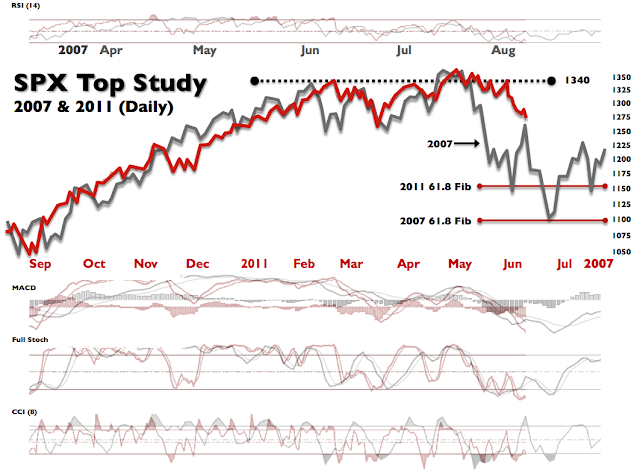 You could argue that the banks have been trading for the last several months on a glide path that would eventually price in considerable exposure to euro zone debt. Whether that exposure is realized in the short term is dependent on the outcomes of those participants meeting in the euro zone over the coming week.
I expect the market to bounce hard this week – likely after the first two trading sessions.