Fear – of a Higher Power

While we often rode on the short side of the precious metals train over the past few years, we always kept a close eye on their lagging miners. Historically speaking, their scorecard didn’t add up: they (collectively) never had their day in the sun.

While in the end they failed to shake our downtrodden perspective, their poor relative performance did stand out as an outlier and ultimately a surprising possibility that their best days may yet have come for the cycle.

Certainly there were some bright spots along the way, but for most producers that should have benefited from gold and silver’s appreciable year-over-year gains since September 2000 – the typical leveraged advantages of holding the miners never materialized. For example, whereas gold has returned around 400% since September 2000 – the HUI Gold Bugs Index returned ~ 377%, the AMEX Gold Miners Index ~ 213% and the XAU Gold and Silver Index a mere ~92%.

Fundamentally speaking, there are several contributing factors – but for us it primarily boiled down to these three:

The good news for investors today is that most of these heavy chains are being unburdened, thanks in large part to the gun the bear market brought to the producers heads this summer – and a bifurcation in performance in the commodity market that should relieve some cost pressures and differentials going forward.

Just one month after gold and silver prices capitulated at the end of June, large producers caved en masse and forked up write-downs of approximately $25 billion. Producers were caught off guard with the sudden fear – either tighten their fiscal house or risk a coronary in the market. Consequently, no stone was left unturned as valuations on current and future projects were reduced, discretionary expenses trimmed and even dividends cut. For the big boys it was diet now – or die a day later.

For some perspective, this was in stark contrast to a year before where many otherwise savvy value investors were falsely enticed by the sharp correction in mining shares and perceived cheap valuations relative to spot prices. The general sentiment at the time was that valuations had overshot on the downside, but were likely just testing the crisis lows from 2008. With Big Ben and company still ramping QE, downside seemed limited – what could go wrong? Unfortunately, most didn’t realize how much further spot prices could fall despite the abundant monetary elixirs and what would happen if the relative valuation lows from 2008 were broken. 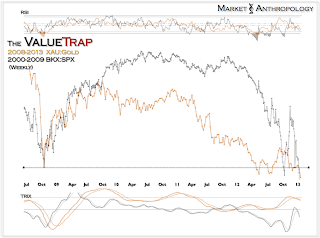 my standing refrains throughout the weeks has been that the precious metals miners are still one of the larger value traps of this market cycle. And similar to the financials in the tail end of the previous cycle – it has ensnared some rather large whales in its net. From the sophisticated palettes of Einhorn to Gundlach, the extraordinary valuations of the miners – relative to gold, have been too attractive to simply pass up for these marque money managers.

Generally speaking, I have maintained a bearish perspective on the miners – despite valuations, for the simple reason I believe(d) weakness in the precious metals complex was and is ongoing.“  – The Value Trap 1/27/2013 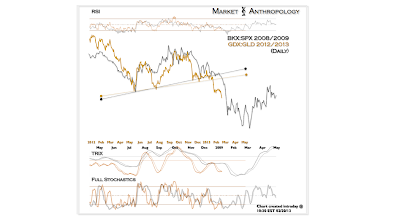 To help guide our downside expectations, we began contrasting the breakdown the financials made at the tail end of 2008 and early 2009, where on a relative value basis they broke the previous crisis lows set in 1990 and 2000. Simply based on the divergent momentum structure in the comparison and the downside catalyst a breakdown could add, we felt confident early in the year that the miners still had a very long way to fall.

As so often the case in the market, the thesis of the earlier vintage of value investors was sound – but their timing was off. From our perspective, they had the right idea that in the summer of 2012 the sector was in the process of retesting the crisis lows – but failed to estimate downside momentum of spot prices and the significant risks those conditions would impart on the miners valuations going forward.

From a comparative perspective it has been the inverse of the value trap the financials became throughout 2008, whereas, the crisis lows caused a near death experience to valuations in the banking sector – the secondary lows in this operating environment brought the precious metals sector to their knees. This is illustrated in the ratio charts and performance series below. 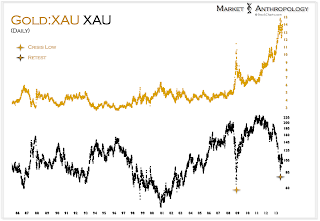 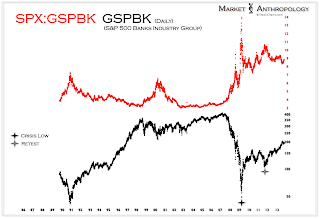 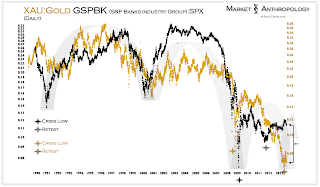 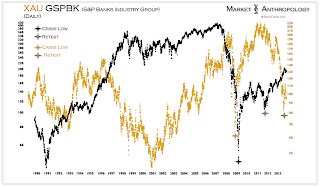 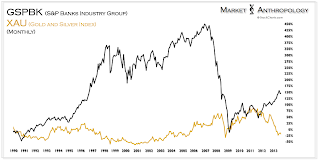 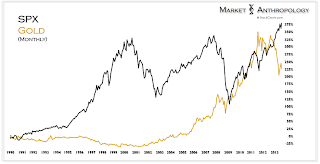 From a purely psychological perspective we have found the 2011-2012 BKX comparative closest to the mark for the miners – in a market environment heightened with uncertainty as the sector adds to and tests the traumas from the 2008 crisis. 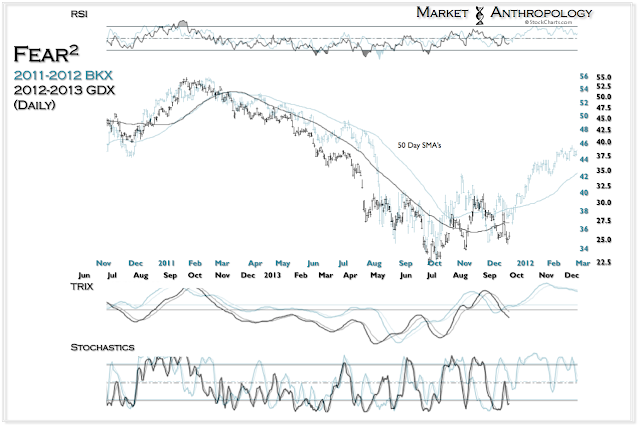 While the comparative crisis low in the financials was a great benchmark on the way down, the miners have diverged over the past month from the V shaped bottom – so often found with a panic low. 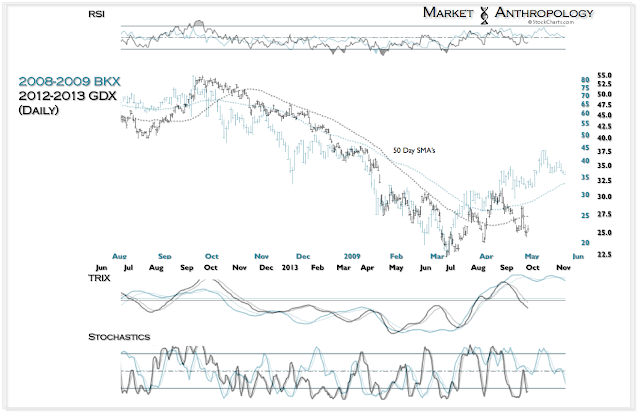 Even on a relative performance basis, the retest by the financials in 2011 fits the character of the precious metals sector today – fear – of a higher power. 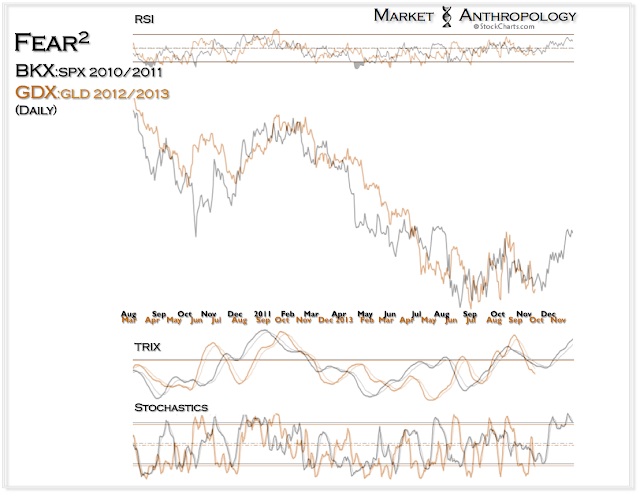 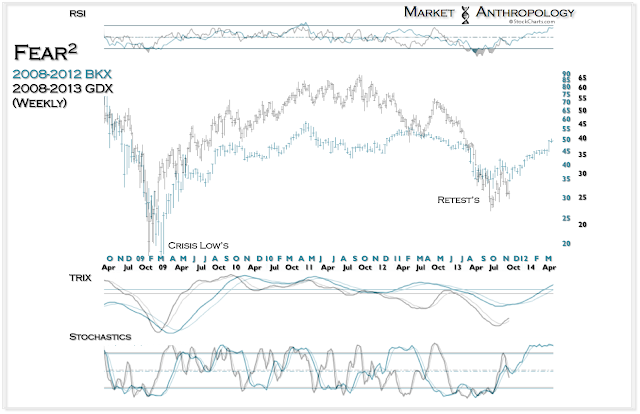 For further explanation of the rationale behind these charts – see:
______________________
*  All stock chart data originally sourced and courtesy of www.stockcharts.com
*  Subsequent overlays and renderings completed by Market Anthropology