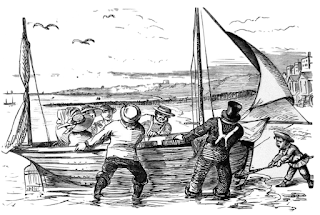 One of the many challenges for participants today in navigating the macro-straits, is at times dismissing the conventional market wisdom for more counter-intuitive perspectives – and always keeping an open mind to where and when the respective monetary handlers may choose to intervene, regardless of one’s bias or market posture. We’ve noted in the past that since the markets arrival at ZIRP and QE in Q4 of 2008, many long standing bedrock orthodoxies have been turned on their head, from “inflation is always and everywhere a monetary phenomenon…” – to the other bookend policy expectation that QE lowers interest rates.

Back in 2009 and 2010, some of the most prominent minds in and around finance argued that such large scale asset purchases by the Fed risked “currency debasement and inflation” and would not achieve the Fed’s objective of promoting employment. So confident with their assumptions, some of them eventually scribed a manifesto as a strongly worded open letter to then Fed chairman Bernanke (see Here) in November 2010.

Notwithstanding the fact that inflation wasn’t exactly the enemy of the state during and after the crisis… LSAP’s did not usher in an era of hyperinflation, but did at the outset of each program, raise inflation expectations and bolster risk appetites, that over time helped smooth the transition from the financial crisis, which ultimately became reflected in the long trend lower in the unemployment rate.

With world markets coming under significant pressure this August and with the September ECB meeting on the docket first thing tomorrow morning, the probability that President Draghi implies or takes further action in Europe has increased. Moreover, from a comparative perspective of the currency and bond markets from the last deflationary scare, there are some similarities to where the Fed surprised the markets in March 2009 with an expanded salvo of stimulus, to the tune of over twice the initial program introduced at the end of November 2008. 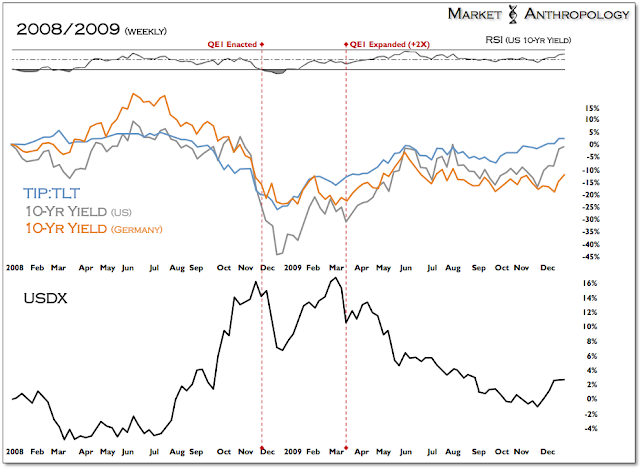 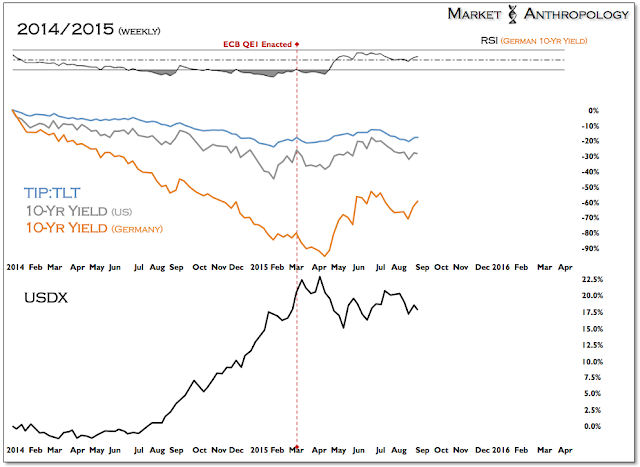 While conventional wisdom is looking for a weaker euro to soothe deflationary concerns in Europe, we would argue that a broadly weaker US dollar would have greater efficacy, as it could reflexively affect inflation expectations worldwide, which in our opinion would have the widest and deepest influence on economies throughout the EU.

In many ways, this is the flip-side of the coin we described in September 2012, as the dollar rally and the great commodity unwind were still in their respective infancies.

Today, my work has suggested that the long-term commodity cycle has crested, growth across both the developed and emerging world economies is turning down, China is slowing rapidly – and the US dollar has found a secular low.I like to remind myself that it’s much easier to rekindle economic growth across the globe, when all that is required is a large shovel, boat and a frothy marketplace. Although commodity inflation has provided the US consumer a painful transition in the pocketbook over the past decade, we likely do not fully appreciate how beneficial that same knife has smoothed the impact of our own financial stumbles – in a world more than ever financially dependent upon the health of the majority. – A Lucid Confusion

Fast forward to today, the pain imparted on emerging economies through a strong dollar and weaker commodity prices has likely run its cyclical course. Over the next few years we expect the dollar to once again test the bottom of its long-term range, creating a rising reflationary tide that should lift most boats – including Europe’s. 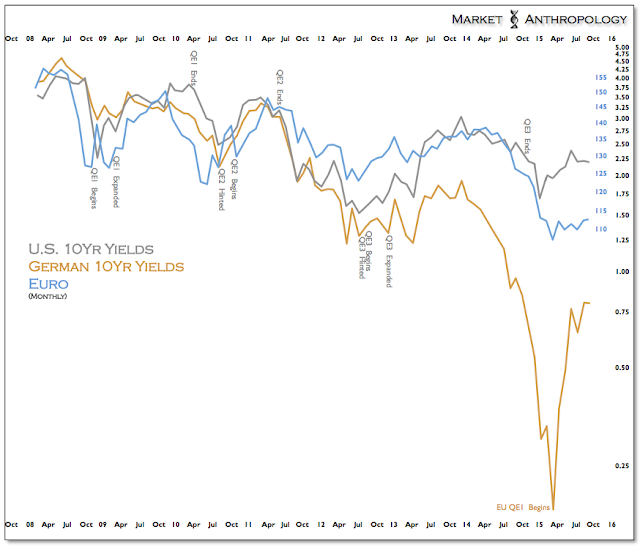 Although characterizing causality in real-time is at best an educated estimate – and at worst a dead end; macro’s one-way street (described here last month): long US dollar, long Treasuries and short oil – has made further progress through the turn and now appears headed towards a reflationary road.

Even with the considerable pressures brought on the equity markets last month, Treasuries did not overshoot to the upside as they frequently have in past risk-off environments, but took further steps in completing a descending topping pattern – similar to the exhaustion of the two previous multi-year Treasury rallies. We maintain our expectations that the 10-year will test long-term overhead resistance later this year and see a weaker US dollar doing much of the heavy lifting, with regards to improving inflation expectations – both here and abroad. All things considered, we still like the longer-term prospects of hard commodities such as oil – especially relative to US equities – and view the recent reversal as a successful retest of the March lows. 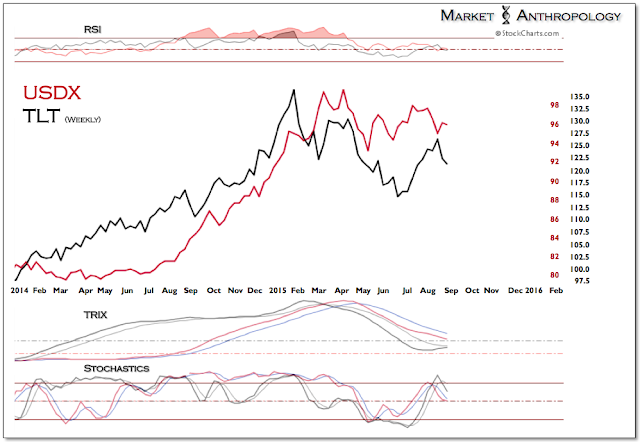 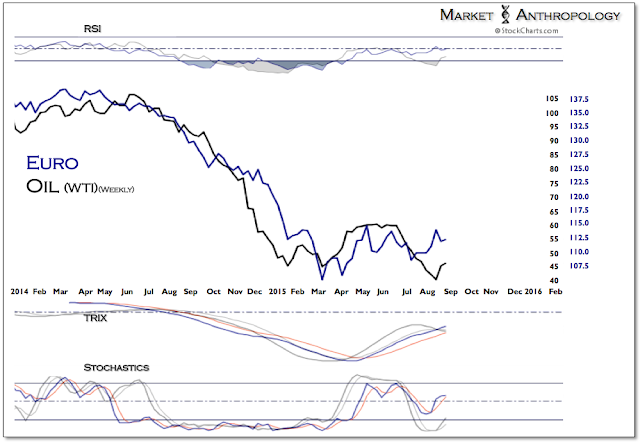 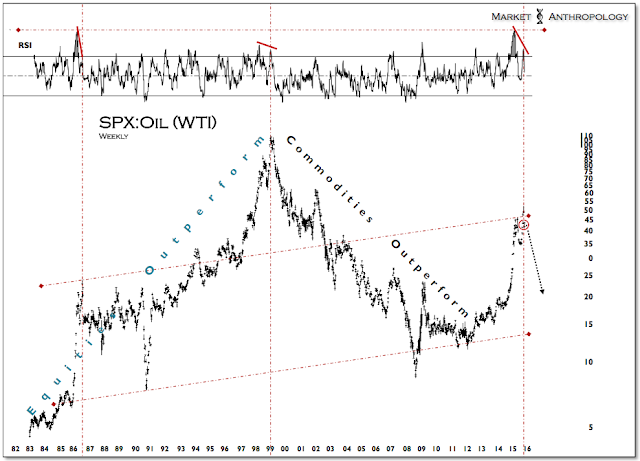 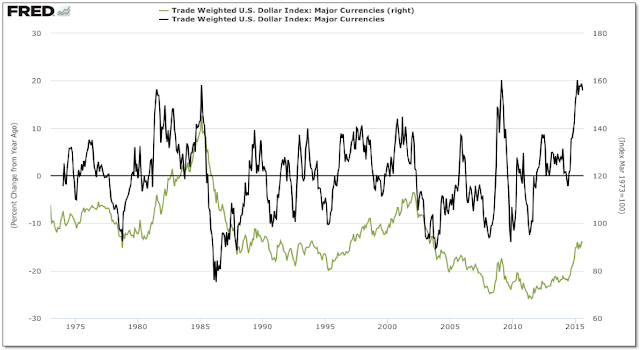 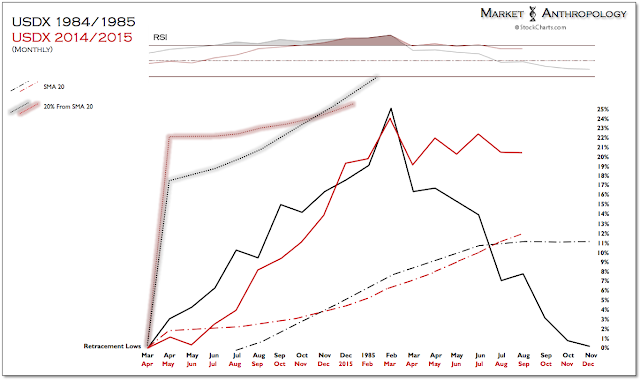 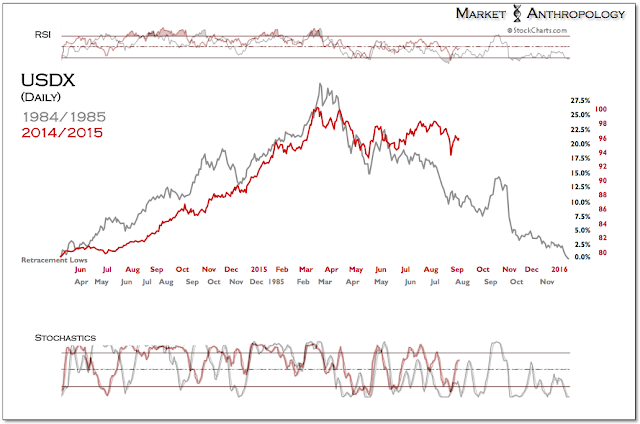 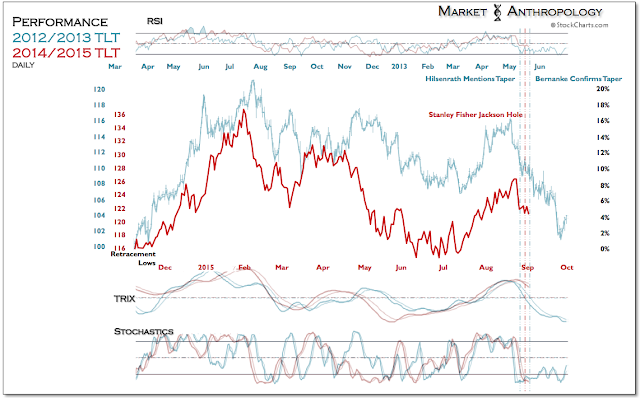