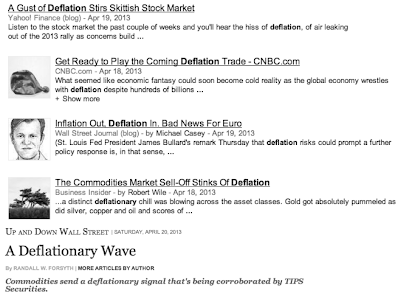 As we pointed out in March, the kinetic potential across the hard commodity-scape appeared to be of the 2008 variety; i.e. watch for disorderly and cascading declines. Following the commodity rout this past week – headlined by severe declines in gold and silver, the deflationary tea leaves we had also been highlighting were brought to the forefront by an audible chorus. We suppose that for many folks – seeing is believing.  Although for the moment we are still sitting on the disinflationary side of the continuum, we wonder how much longer until deflations formal third act appearance is made – and what the Fed’s policy responses will be. As much as we recognize the considerable effects of the Fed’s structural work in the markets, we have always weighed their most powerful tool to be a motivational capacity to inspire market expectations. Considering this recovery has predominantly been waged on the shoulders and guidelines of the Fed – the psychological vulnerability to disappointment is greater than ever. With that said, we are rooting for our monetary handlers to continue fighting the good fight, but fear the inherent limitations of bridling mother nature.
_________________

Deflation – a word as synonymous with the Great Depression as it is with Ben Bernanke and monetary policy. And although the Chairman’s academic vision-quest had focused on its many perils and shades, it has long been viewed as the Kaiser Soze of the financial system. Inflation, for all its pernicious ways, does come with a well-worn reference manual of troubleshooting examples, that should it find malicious traction – has enough policy measures the Fed could realistically apply in the current monetary environment. Deflation, however, has remained lurking in the shadows of the recovery just long enough, that should the collective world economy turn down with enough harmonic velocity, could make a third act appearance – steal the show, as well as the accompanying legacy reviews.
_________________

Deflation’s first act took stage after the Nasdaq bubble burst in 2000. It wasn’t until the November 6th 2002 Fed meeting that an official cautionary mention of deflation was brought forth. Transcripts revealed that the Fed Chairman at the time – Alan Greenspan, remarked, “It’s a pretty scary prospect and one that we certainly want to avoid.” He also expressed concern about the country falling into a “Deflationary hole.” As consequence, the Fed continued to lower the federal funds rate at the November meeting and cut one more time the next year pushing the rate to 1 percent on June 25, 2003 – a 45 year low. It was also directly subsequent to the November 2002 meeting, that on November 21st of that year, Chairman Bernanke – then a regional Fed governor, delivered his infamous, “Deflation: Making Sure “It” Doesn’t Happen Here speech. Needless to say, participants were jockeyed to the risk troughs and the deflationary tide receded after the historically low interest rate environment turned down an over-valued US dollar and rekindled economic growth, inflation expectations and wealth perceptions. While domestically centered around the US housing market, a broad and collective economic expansion arose from the now emerging economies tied to a fresh commodity cycle.

In the fall of 2008, deflation’s second act arose from the collapse of the housing and commodity sectors and the smolder of the financial crisis that led the global economy to a grinding halt. Now coordinated with the other major central banks, the Fed reacted to the second coming of deflation by aggressively following the monetary policy easing playbook and by administering a radical bolus injection of quantitative measures in November 2008. By December 16th, the Fed arrived at ZIRP – thus, lowering the fed funds rate to 0%. In an attempt to stabilize markets as well as ignite inflation expectations following the sharp equity market declines into March, the Fed more than doubled its quantitative purchases on March 18th, 2009. Led by the Fed, the net a(e)ffects of these extraordinary measures turned back another deflationary tide – as well as a strengthening US dollar. It also succeeded towards restoring faith in a now matured commodity cycle and the emerging and recently emerged economies tied to it. Success was noted in the second half of 2009 when inflation expectations improved and were on the rise.

By the second quarter of 2010, the Fed had completed its purchases of Treasury and MBS securities tied to the initial salvos of QE. As consequence, risk appetites and inflation expectations had been receding in the equity and commodity markets. The CRB and CCI indexes had crested in January with the SPX topping at the end of April 2010. Conversely, the US dollar had exhibited considerable strength since the end of 2009. To rejuvenate risk appetites within the system, the Fed hinted – then introduced QE2 in the second half of that year. This inspired a broad based rally in the commodity and equity markets and once again turned back the US dollar from undermining the net benefits of QE and inflation expectations within the system. Although core PCE hit a record low in the December 2010 data series, QE2 initially succeeded at turning inflation expectations back up through 2011.

As we have repeatedly described in our notes since 2011, we often view silver as an emotional proxy of the commodity sector. As such, once it began its parabolic ascent sparked by QE2, we strongly felt that the commodity cycle was nearing exhaustion and the US dollar had finished carving out a secular low – regardless of QE. Although many market participants were still quite concerned at the prospects of runaway inflation and a broken dollar tied to extraordinary monetary measures – we felt those expectations were unfounded and dangerous to those long the commodities trade.

“And although it is quite true that our current fiat monetary system is inflationary over the long run, the degree of distortions that are currently being reflected in both the precious metals market, the commodities market and the currency markets – likely do not reflect a representable correlation to inflation today, but more of a serious bubble in the commodities sector.“ – Y2K=QE2 4/18/2011

Shortly thereafter, silver and the commodity sector crested and the US dollar began to strengthen. Headline PCE topped a few months later with core PCE turning down in the beginning of 2012. Fast forward to where the markets currently float downstream of an additional round of stimulus with QE3 – and our expectations last September for further weakness in the commodity sector, as well as the US dollar’s stubborn strength in neutralizing inflation expectations have been realized:

“While I am impressed with the Chairman’s conviction and fortitude in persisting down a path he clearly defined over a decade ago, I find myself with increased skepticism towards many investors perception of its perennial influence – that closely correlates with my comparative work with trends, analogs and historical market data. What many in the financial punditry will describe as an obvious cause and effect – is more than a little bit nuanced when you step back and gauge the broader environments the Chairman has created monetary policy in. During the prior salvos of QE in 2008, 2009 and 2010 – the commodity cycle was still cresting, thus, emerging global growth (BRICs) remained elastic; China was growing at a double digit pace – and the US dollar was still searching for a long-term low.

Today, my work has suggested that the long-term commodity cycle has crested, growth across both the developed and emerging world economies is turning down, China is slowing rapidly – and the US dollar has found a secular low. I like to remind myself that it’s much easier to rekindle economic growth across the globe, when all that is required is a large shovel, boat and a frothy marketplace. Although commodity inflation has provided the US consumer a painful transition in the pocketbook over the past decade, we likely do not fully appreciate how beneficial that same knife has smoothed the impact of our own financial stumbles – in a world more than ever financially dependent upon the health of the majority.

I suggest we now minimize the academic conventions and transmission mechanisms of QE, and the purported impacts of the intervention playbook penned by the Fed over the past decade. Why? Because now that the central banks have once again responded to the drumbeat of their constituencies, the marketplace will now carry out psychological exams in the face of their monetary proctors. The final results, once the initial anxiety and euphoria abate – will likely uphold the long-standing market tradition of breaking conventional wisdom against the grain.

The commodity markets, that have rallied so fervently this summer in anticipation of another bolus by the Fed, the ECB and the PBC – will need to overcome the notion of “pushing on a string”, that was not nearly as applicable in 2010 – as it is today. It is my belief, based on my comparative work with the US dollar, the Australian dollar and the CRB, that the commodity rally ignited this summer will fail – and fail as prominently as the equity markets faired to the aggressive monetary policy regimes enacted by the Fed at the end of 2007.

Back then, market psychology quickly pivoted from – “Don’t fight the fed!”, to “the Fed is pushing on a string!”

A common denominator throughout Act’s I & II of the Fed’s lengthy battle with deflation is a capacity to weaken the dollar and rejuvenate inflation expectations. From our perspective and as we await Act III – that ship has sailed. 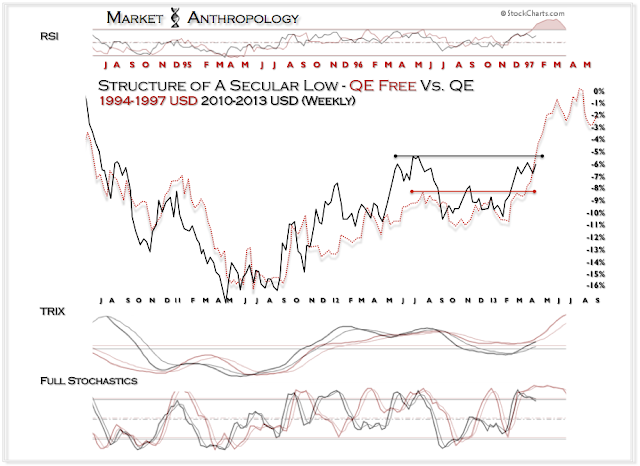