Currencies at a Crossroads

With the final sessions of trading on deck for May – and following a week in which the US dollar index rallied over 3 percent, the USDX arrives at another potential crossroad: Continue heading north above milepost 100 or get back on a reflationary road to the southeast.

Technically speaking, considering the relative performance extreme reached in March, we remain in the later camp and continue to contrast the 1985 secular pivot as a roadmap through the prospective turn. 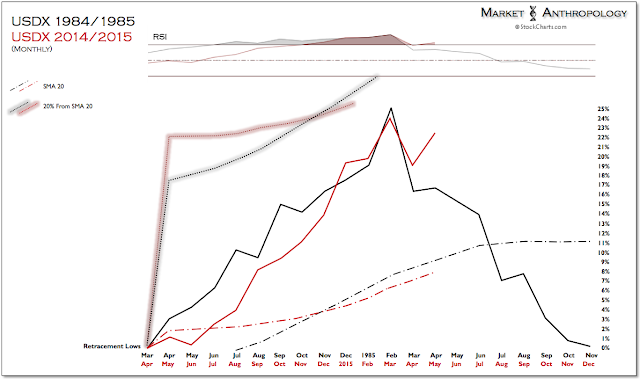 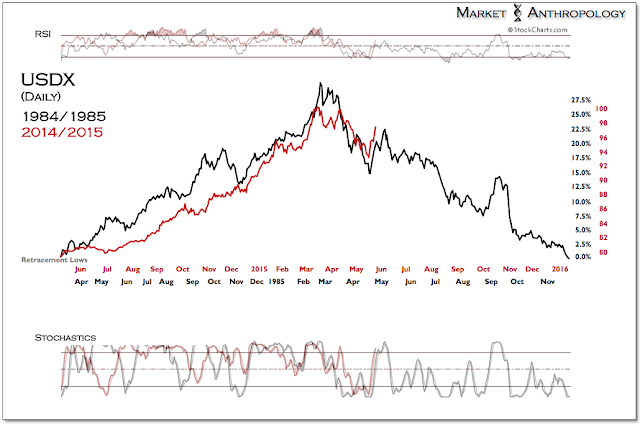 To date, the bounce has taken place proximate to where momentum in the historic pattern alluded, with the 1985 market retracing 50 percent of the initial downside pivot. 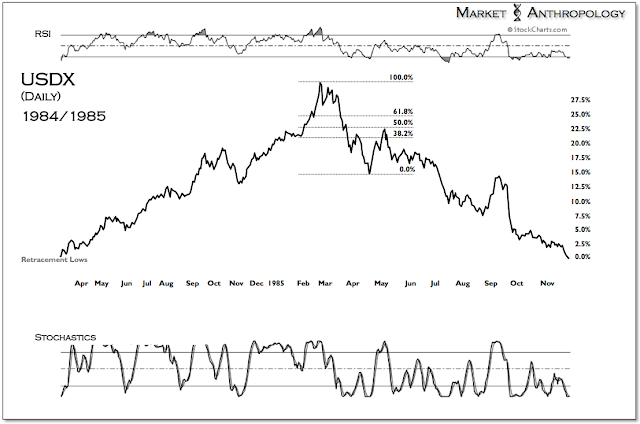 Through Tuesday’s close, the USDX has retraced 61.8% of the current move. 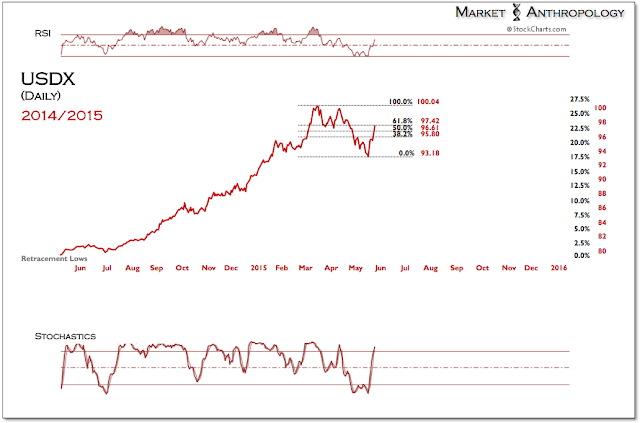 Euro weakness – the largest currency component (57.6%) of the USDX, has resurfaced as a resolution in Greece remains elusive, as time runs out for the troubled nation to avoid a possible default and make the first of four payments in June to the IMF next Friday.

Recently, there’s been talk of allowing Greece and its creditors more time to negotiate a final funding arrangement without default, by allowing Greece to bundle the four payments together at the end of June. However, this extension will only be feasible if there is credible confidence communicated to the markets that both parties were working towards a tangible and realistic resolution.

All things considered and as described in previous notes, we believe at the end of the day it’s overwhelmingly in the best interest of the EU and its strongest economy – e.g. Germany, to compromise with Greece and avoid a fracture in the monetary union. Considering the election results in Spain this weekend that echoed Greece’s sharp pivot to the left last year – and the reality that there is no firewall tall or broad enough to contain contagion if a larger member state such as Spain would look to follow suit – we expect the gamesman and brinkman-ships to set sail towards calmer and more considerate seas.

As such, we will be looking for early strength to be sold in the back half of this week as markets set their sights on June.

On a tangential currency slope and making up the second largest weight of the USDX (13.7%), the yen also remains at an important crossroad: Break long-term support – or find traction and strengthen from the correlation extreme extended with the Nikkei over the past two years.

On Tuesday, the yen traded below long-term support as the US dollar broadly strengthen against all 16 major currencies. While certainly not a vote of confidence towards our own expectations that the yen will strengthen from the correlation extreme with the Nikkei; from a relative performance perspective, the yen remains stretched by more than 2 standard deviations below its 45-year trend (h/t: Will Slaughter) – and completing what we perceive to be an inverse resolution of the correlation extreme witnessed during the financial crisis (see below). 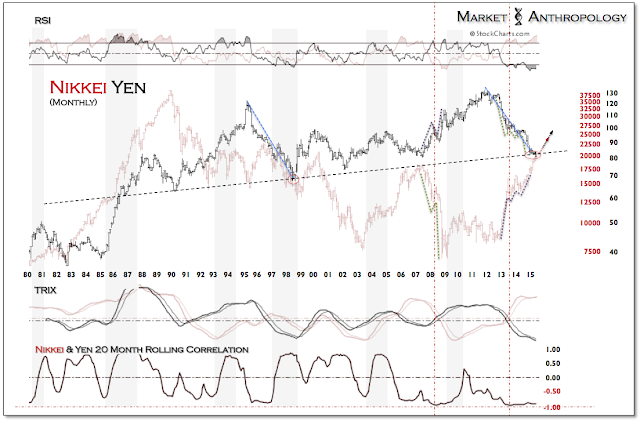 In view of this, we continue to favor a position in the yen, predominantly as a hedge of equity exposure to Japan. Similar to the resolution of the correlation extreme between the yen and the Nikkei in Q1 2009, it wouldn’t surprise us if the previous outperforming asset (yen 2009/Nikkei 2015) initially underperforms as the markets transition to a new positive correlation relationship. 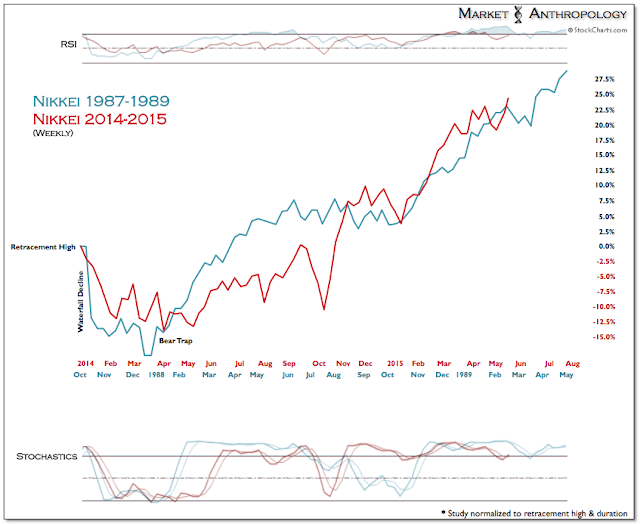 The yen has audibled from the 1998 comparative trend, by breaking back below at the vertex of the descending range it remained in over the past 5 months. Our biased suspicion is that the short-term breakdown in the yen and breakout in the closely followed USD/JPY exchange rate will be ephemeral, as those late to the party buyers of the breakout will add fuel to the prospective reversal. This brings to mind the old technical market adage – from false moves come fast moves. 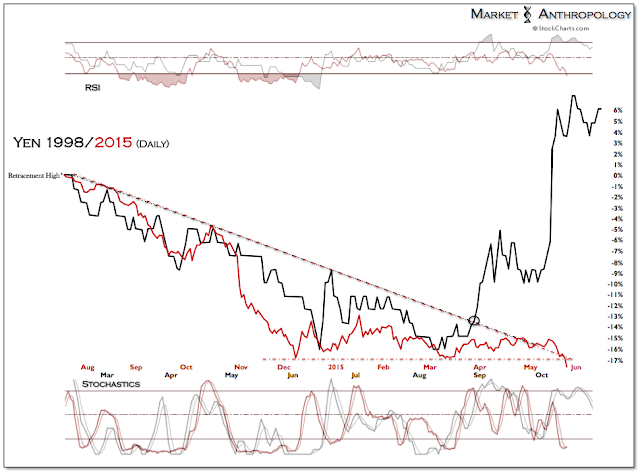 That said, gold and the precious metals sector has closely followed the trend breaks in the yen over the past four years, with the three month rally recently turning down last week with continuation through Tuesday’s close.

Should the yen continue to decline below long-term support, it would strengthen the expectation that new lows in gold and the broader precious metals sector were forthcoming. 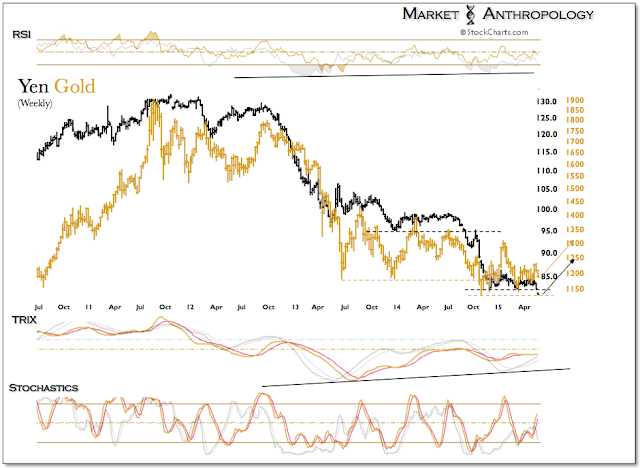 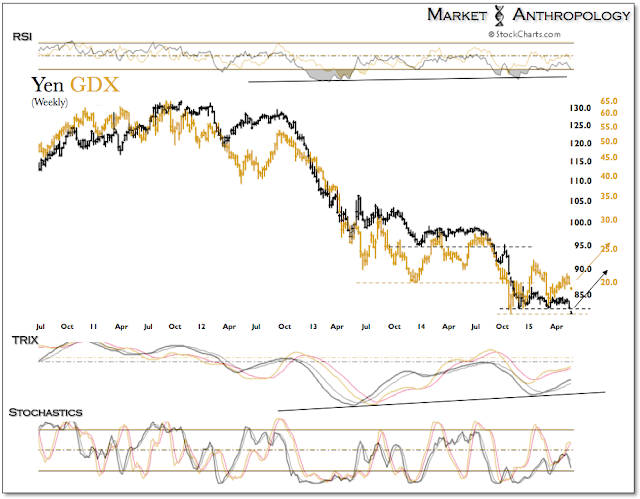