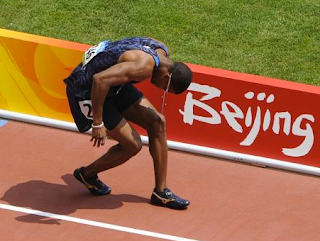 Regardless of your investment horizons in China, there’s no avoiding the fact that its equity markets suffered a major setback over the past month. Declining more than 30 percent in just 17 sessions, the move was even more extreme than we had previously suspected in our most recent note on China in June (see Here). Is it a pulled hamstring from the quick sprint – or a heart attack – remains the overarching question for investors and traders alike.
Granted, “setback” is a matter of perspective, considering the magnitude of the move over the past year which saw the Shanghai Composite reach a high on June 12 of 5166 – more than 150 percent above it’s close from a year earlier. Taking into account that many of the most vocal bears on China were calling for a crash when the index was flirting ~ 2000 last year, their triumphant refrains over the past few weeks ring as hollow as their would-be returns – should they have followed their own advice.
In classic proof by assertion delivery, these very same pandas have now moved their goalposts and downside targets on the Shanghai up to a hopeful return to ~2000 – the same level previously believed would be the start of the downside denouement for the index as well as the beginning of the end of the great reckoning and rebalancing for China’s economy.
Nevertheless, misery loves company – and the breakdown in China’s equity markets has captivated the comparative imaginations in the financial media, which was largely already primed for disaster as the Shanghai Composite defied downside expectations over the past year – much to the dismay of the hungry pandas.
Greasing the wheels of the story has been the heavy handed actions on the part of Chinese authorities, who just last week suspended the sale of nearly half of the A share listings after the index lost traction and more than a quarter of its value since setting a high on June 12.
So – was it a pulled hamstring, a minor flesh wound or something much more serious?
Although some pundits and analysts find parallels with the severe US equity market declines in 1929 or 2008, we believe it’s a more benign consequence of China’s extreme outperformance, per se – closer to the likes of the severe retracement decline in the Nikkei in May 2013, rather than an early indication suggestive of much greater hardships ahead for China’s equity markets and economy.
While there’s certainly enough causal concern for the perennial pandas to hang their bearish outlooks from, we maintain our long-standing belief that the market – as removed as it became from China’s underlying economy, had traveled more than enough road over the past decade to largely discount these conditions and whittle down the actual bubble valuations reached at its peak in 2007.
Per Meb Faber – the ever erudite global market surveyor, China’s CAPE ratio has returned to ~ 15, significantly below its peak of 62 in October 2007 – and modestly above the level (12) reached at its trough in December 2013. Despite the greater cynicisms held towards China’s equity markets and its regulating authorities today, we view them – just as the Party clearly does – as a prospective wealth transmission mechanism, as its economy matures and transitions from being driven primarily by construction and production enterprise – to greater domestic consumption. 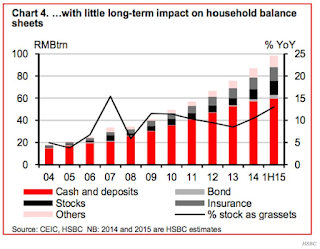 Prospective, because although the media has remained fixated on how many retail accounts were opened in China over the past year, retail traders represent just 4 percent of the total population and stocks currently account for less than 15 percent of all household assets. While in the short-term a continued market decline may lead to painful losses for the retail-come-lately crowd, total margin positions are equal to only 3 percent of total household bank deposits. Seemingly lost in translation is the paradoxical fact that although the Chinese are widely viewed as avid speculators – they are among the worlds greatest savers with a stash of cash worth nearly 50 percent of China’s GDP. Comparatively speaking, the US holds less than half – coming in last year ~ 17 percent of its GDP.
Although certainly more nuanced when you consider the significant income disparity that exists throughout China, the greater takeaway – with respect to the current correction and future prospects for their markets – is that a majority of the population has yet to materially invest or feel the broader wealth effect from either side of the tape. The reality is that China’s equity markets are quite young by global standards, resuming trading only 25 years ago after being closed for decades by the Communist revolution. Often viewed as the speculative wild west of emerging markets, they will increasingly exert a broader reach if the government succeeds at transitioning the economy to a more mature footing – without a prolonged economic contraction and market meltdown.
Here lies the crux of China’s variant perspectives today.
What the pandas are largely betting against – again, is that the new reforms brought forth by President Xi Jinping in 2013 is broadly failing – and that real structural economic improvements will only take place after a painful cyclical slowdown is digested. From their perspective, what the equity market crash exposes is the dangerous topical and speculative nature now prevalent in China, which had largely diverged from its dour economic underpinnings. Moreover, any attempts to conspicuously support or stabilize their equity markets is an act of futility, as market forces will inevitably exert a much greater influence in the face of economic weakness.
From our perspective, what these pandas fail to concede is that 1) China isn’t a western economy – it is still very much a hybrid system where the state holds disproportionate influence over the private sector, and 2) they have the resources and deep pockets to instigate support where they see fit.
Although western ideals of free-market capitalism will invariably denounce China’s heavy-handed efforts of late; the validity of their economic data or the efficacies of Xi Jinping’s new governance platform – the same criticisms in varying circumstances have been made since they initially embarked on their historic reforms nearly four decades ago.
Admittedly, it’s still too early to determine whether China can successfully titrate the next steps and maintain its relatively high level of economic growth, while reforming its economy; we do, however, defer to their long track record of exceeding catastrophic expectations – which to a large degree has been sustained by China’s uniquely powerful monetary and fiscal policy flexibility.
Over the past few years we’ve followed a comparative blueprint for the Shanghai Composite: the S&P 500’s consolidation breakout from the secular low in 1982. And although the index got ahead of itself and filled out the proportions of the pattern quicker than expected, the retracement from the performance extreme has now tested and bounced hard from the breakout level this past March. All things considered, we maintain our expectations that a secular move higher for the index is still underway, from the consolidation breakout last year.

In hindsight, the breakdown in the Shanghai now resembles the initial break in the Nikkei in May 2013 – subsequent to the rollout of Abenomics in Japan in the fall of 2012. During that period, the Nikkei rallied nearly 90 percent in less than 7 months, on the back of broad stimulus initiatives – before eventually retracing 20 percent over just 16 sessions. 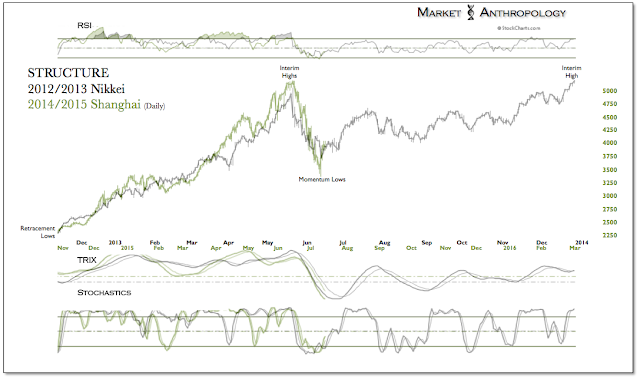 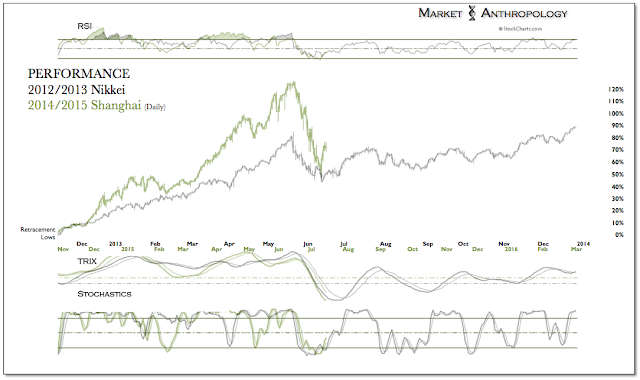 While the short-term plight of China’s equity markets is just an ancillary concern to their broader reforms platform, by the Party’s own public endorsement over the past year, their stability is critical to wider participation and support. Considering that similar skepticism was levied against the Fed’s extensive intervention in the markets during and subsequent to the financial crisis or the Bank of Japan’s enormous efforts over the past three years to break its own deflationary quagmire – In an era where central banks have increasingly played an overtly visible role in jockeying participants to the field, we certainly don’t underestimate the even greater capacity in China to step in and shore up their own markets from what we perceive is a more short-term consequence of extreme outperformance. In our opinion, betting against that here is more of a fools wager – by hanging on to a preconceived notion that China will eventually have its hard landing or 1929 market decline.
______________________________________
For further reading on our thoughts on China this year, see:

Shanghai’s Gonna Crash!..Like a Bull in a China Shop
Can China Save Europe & Vice Versa?
The Great Titration Continues
China Flirts with a Major Breakout
Climbing the Great Wall of Worry in China
Taking Off in the Rain