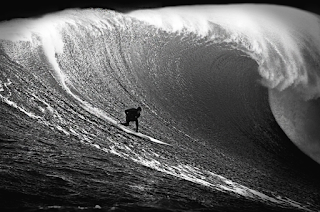 So many bedrock beliefs of investors have been turned on their heads or flatly disproven over the course of this cycle. Never was this more true than with inflation and inflation expectations. And while some may insinuate that it’s just a matter of time before their respective assumptions are realized in the market, the fact remains that timing is paramount to either comfortably catching the wave – or treacherously treading white water while fighting for another opportunity to get back behind the breakers.

By and large, appraising inflation and its considerable influence within the markets has been the Mavericks of macroeconomics for this cycle. Although we’ve personally taken some nice long rides on market ideas closely tied to our own inflation expectations, we have also been on the receiving end of leaving too early and feeling the weight of a position move against us. Nevertheless, it is what makes markets,  markets – forever fascinating and always a challenge to navigate. Catch a big swell and you feel like you’ve bridled mother nature. Remain “in the zone” and you run the risk of losing some healthy humility towards the hand that feeds you. The challenge is always to keep riding and learning, with a heavy appreciation of the larger forces at play that will inevitably come down upon you at some point.

When it comes to those forces, we are looking for yet another counterintuitive outcome in the wake of when the Fed finally moves off of ZIRP. Whether it’s this afternoon – which appears highly likely, or early next year, we expect financial conditions to loosen globally as the Fed steps policy back away from the crisis stance it’s maintained over the past seven years. From a behavioral point of view, QE and ZIRP have not been considered a positive station for the markets for some time; rather much the opposite – a confirmation in the belief that the economy still requires further external support. From a market perspective, maintaining current policy has been in and of itself – disinflationary. As inflation has fallen, real interest rates have risen.

In many ways – but par for the course of ZIRP, this tightening cycle has been discretely front-end loaded. Meaning, real tightening took place during the lengthy expectation phases from when the Fed first telegraphed its intentions to taper QE and then the later phase over the past year of crawling towards actually leaving ZIRP. The first phase in 2013 primarily affected yields and the later has mostly influenced the US dollar. Taken in sequence, financial conditions have tightened significantly since May 2013.


What happened to yields when the Fed finally began to taper in December 2013? Participants conventional wisdom of a broad rising rate environment in 2014 was largely met with disappointment. Longer-term yields reverted from the relative extreme achieved at the start of the taper as disinflationary forces had yet another leg to run through the Fed’s next expectation phase of policy normalization. The taper’s buy the rumor – sell the news (inverse in Treasuries) reaction is the same dynamic typically seen in the US dollar following the commencement of traditional rate hike regimes by the Fed and one we fully expect to play out over the coming year as the Fed acknowledges with the move off ZIRP the firmness of the US economy, but doesn’t look to disrupt global markets that are still historically accommodative. The net effect should weaken the dollar and help raise inflation expectations downstream.

The long and short of things, we believe assets that have taken the brunt of this extended normalization (e.g. precious metals, commodities, emerging markets) remain at the very least attractive mean reversion candidates (i.e. Dornbusch’s overshooting hypothesis), with potential bullish asymmetries if our expectation that inflation will surprise to the upside. The silver:gold ratio, which in the past has been an excellent proxy for reflationary forces, continues to flash a rare positive momentum crossover (Figure 3). Moreover, the bullish comparative pattern in equities from 2011 (Figure 4) also points towards a broader reflationary path in the near-term, and a break from the replicating disinflationary patterns found in sensitive assets such as the precious metals miners (Figure 5). Just as the banks were largely value traps up until Q4 2011, we suspect the miners will finally have their comparative pivot (Figure 6) towards more benevolent market conditions.