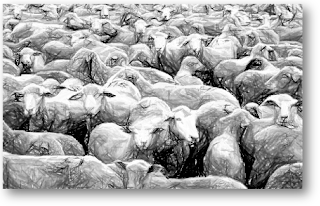 It’s never a panacea – but its the only game in town.
They are merely blunt instruments working along the fringe. A bazooka here, a helicopter over there. Like a cowboy corralling the herd with a “Yah!” and a occasional cattle prod, we react in both the emotional and physical sense to their interference. First wincing in bewilderment and confusion – then running as if our lives depend on it.
On occasion, the herd gets itself so worked into a momentum frenzy that the weak are literally trampled to death under the weight of their own kind.
Make no mistake about it, the recent participants in the silver market were trampled to death by their kinsman. It may have been their approaching monetary handlers or just the glimpse of their precarious and lofty surroundings that spooked their course. In either case, they have my focused attention. It would be wise to watch them both in the historical sense and to where we sit today – to glean any perspective of where we may be tomorrow.
To interface this idea, I have included a 10 year chart of the CRB index with hashes acting as demarcations of silver swoons. The three time periods of the broad head and shoulders top formation of the CRB Index are described below. On the respective time study’s, the SPX is provided for additional context.

The reverse was true for the decline in silver in 2008. The respective asset classes were inversely correlated going into the break – with the equity markets rallying once the precious metals market broke down. The actual top for the CRB was not made for another four months.

Today, we have a similar dynamic to 2006 where both asset classes have been trending together. The primary difference is the magnitude of gains and losses for silver relative to the equity markets. I believe in terms of just price structure and how it is represented on this chart, that the equity markets will likely tighten that spread.

In my rose-tinted view, the Fed accomplished the primary goal of QE2 by enticing risk briskly back into the system across all asset classes. Certainly it’s an imperfect method of policy, with collateral damage from my bill at Wegman’s to the action in the commodity markets. However, as of last summer the market’s were very close to rolling over, even crashing (technically speaking) – before Bernanke introduced the notion of QE2.
There is no way for me to definitively prove this (*but that is the dirty little secret to all market musings – no matter how quantifiable they appear to be), but once a market reaches critical mass, it can become perpetually motivating (to a point) and more resilient to extraneous trauma. Like a gyroscope teetering on its fulcrum, requiring a quick spin to regain torque – the markets, and by extension the economy – required that burst of energy last summer to reach critical mass.
To further push the envelope of physics analogies forward, you could say that I am expecting the markets to go through a centrifugal transition from indiscriminate reflation to focused reflation – the eventual byproduct of which will be cheaper commodity prices and an inflow of capital from commodities into equities. Here is a perfect example of the contrasts in asset classes today at both sides of the spectrum.

The blow-off effects of the commodity market cycles (sharp rise followed by a sharper fall) may even translate into a brief recession (as defined by NBER) – which I am expecting the equity markets to continue discounting. The magnitude of weakness (which I expect to be at a minimum of a 15% decline for the SPX) will be dependent upon the collateral damage of a strong dollar/weak Euro, the degree of commodity hedge fund contagion (i.e liquidity) and the Fed’s reaction to the markets swoon. The debate over the deficit and debt limit will likely add fuel to the fire – although you could make an argument that it will force Congress to resolve that issue sooner rather than later (I know wishful thinking…). As a guide, a simple fib retracement from last summer’s low should provide a broad outline if the market decides to decisively break lower.

I am carrying a short position of the Russell 2000 small cap index (via TZA) into next week because I believe my expectations for a bull trap (see here) in the equity markets could be realized as early as Monday morning. The Russell looks the most appealing from my perspective, because it has enjoyed the broadest gains since the start of QE2 and is stretched the most technically.
_______________________________
I try to routinely update the Chart Lab section of the site. Unfortunately it will not show up in the RSS feed which draws from the main page.
I just joined Twitter. All my trades and occasional market musings are disclosed in real-time here.
(Position in TZA & UUP)