Can China Save Europe – & Vice Versa? 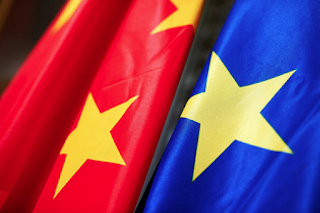 Over the past decade, while US pundits and politicians soapbox their Kabuki laments over Chinese trade policy and misgiven currency regimes, Europe has quietly emerged as China’s largest trading partner and strategic counterbalance to perceived US economic hegemony.

Perceived, because just last fall the IMF recalculated its projection of China’s 2014 GDP, returning the torch of “Worlds Largest Economy” – a handle China carried over 19 of the past 20 centuries. Factoring in the GDP of the runner-up (EU), the composite scale between China and the EU accounts for roughly a third of the world’s economic output.

As we look for China to continue to take the next steps in transitioning its maturing economy away from being driven by unsustainable construction and infrastructure growth to greater breadth of domestic consumption, Europe is well positioned to capture the lion share of trade spoils, with China also greatly benefiting from their deep financing relationship with its largest foreign investor base – Europe.

With trade flows between Europe and China reaching over $1 trillion in recent years, the immense commonality of their vested interests in one another has only grown, primarily at the expense of more traditional trade partners – namely, the US.

Below are a few highlights from a dated – but recommended, research note from Deutsche Bank (see Here), describing the burgeoning strategic economic relationship that exists between the EU and China – and which likely will strengthen over the coming years.

With concerns of the slowdown in China continuing to build with each passing week’s diminishing data dumps, we remain focused on the bigger picture narrative unfolding – that of remaking China’s system of governance to potentially afford more sustainable economic growth in the future, while titrating the colossal hybrid economy further from communism to capitalism.

In our opinion, the popular view by the policy wonks – that of a painful economic rebalancing at the foot of decades worth of breakneck growth and over-investment, largely ignores the capacity of the People’s Bank of China (PBOC) to actively stimulate growth and mitigate liquidity concerns – through this inevitable slowdown, while continuing to develop greater interdependent economies of scale with their largest trading partner. The net effect – we believe, should go a long way towards smoothing this transition and shifting the world’s balance of power further east.

Chinese President Xi Jinping has made the strategic partnership with Europe an early focus of his term, with Europe committing last year to bilateral talks on a free trade agreement with China. As trade disputes are often contentious and present real risks to further developing a common economic interest, the long-term benefits to both economies far outweigh whatever short-term political hurdles may emerge or are postured at the podium from tangential concerns. I.e. Germany may push Greece to the limits over a new debt deal, but ultimately will not risk a fracture in the fragile EU – as they clearly have the most to loose.

1. Will a successful transition in China continue to build out the foundation for a lasting bull market in equities, and;

2. Will it also provide Europe with another lifeline away from the deflationary conditions still swirling around the old world?

Although we agree that in times of conspicuous central bank influence and intervention, the correlation between the relative health of a country’s economy and their respective markets is increasingly difficult to discern, for both Europe and China today – their equity markets should play a leading role in foreshadowing the character of the next chapter of this massively influential bilateral relationship.

Despite growing skepticism by equity analysts and pundits of the recent surge in Chinese stocks over the past year, we continue to like their prospects and view its equity markets as a leveraged position on China successfully engendering greater consumer consumption, as stocks provide a broad wealth transmission mechanism to a growing percentage of the population.

Along these lines, we’ve approached the August 1982 consolidation breakout in the S&P 500 as a prospective roadmap for a sustained move higher in the Shanghai Composite index. To a large extent, the structure and momentum congruences have played out in the SSEC, with the index even exceeding our own expectations and doubling over the past year as a violent breakout rally confounds both the policy and equity bears. From our perspective, the transition in China is well on its way to maintaining their exceptional legacy of surpassing presumptions over the past four decades. Of course, not withstanding the considerable set-backs ushered in through Marxism in the mid-20th century, this is par for the course in China over the last few millenniums. 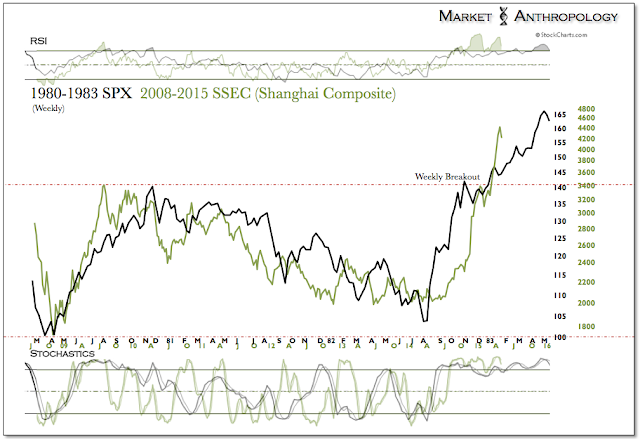 Turning to Europe, while the German’s clearly have the most significant inroads through trade in China, we suspect the more fragile economies – such as Spain, would also greatly benefit from a rising tide, if China successfully avoids a hard landing and stimulates greater domestic consumption. Over the next year, Europe’s plight is tightly tied to whether recent deflationary conditions are in fact transitory or more pernicious in nature. While it’s too early to declare a new trend, after falling for four consecutive months, euro-zone consumer prices remained flat in April – easing deflationary concerns.

As described in previous notes, the higher beta equity indexes in southern Europe – such as Spain’s IBEX, continue to walk the equity high wire act of where the previous two major perennial asset declines over the past century have cyclically turned down. What the ECB is attempting to break with its recent adoption of QE, is the policy missteps that were compounded by each central bank in their respective cycles; both by the Fed in late 1936 into early 1937 and the BOJ in 1997. With hindsight 20/20, the powers that be worsened economic conditions by tightening monetary and fiscal policy, where they very likely should have eased. 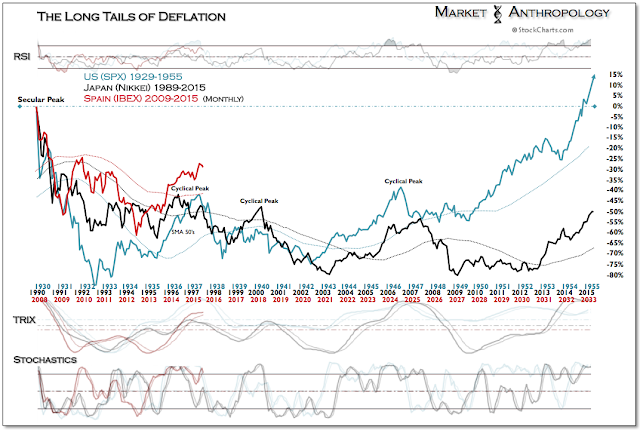 With China and Europe both aggressively moving to provide more accommodative monetary policies – while further developing crucial and strategic economic synergies, the Ancient and Old Worlds look to pen a new and more prosperous chapter.

Although the economic data in China continues to sour, we expect the recent surge in Chinese consumer confidence on the back of a significant equity market rally, will soon translate into improving domestic consumption – buttressing a positive feedback loop to its largest trade partner.

Assuming Germany ends their own Kabuki theater soon, it would appear that Europe’s more fragile economies may now have a fighting chance of breaking the glide path of the major asset deflations of the past century.