In a fitting bookend to his storied command of the world’s largest and most powerful central bank, Bernanke trimmed our cocktail punch to the tune of $10 billion proof per month. The worlds greatest barkeeper will take us down easy.
The impact to the market?

We think it’s appropriate to let the dust settle before making any real adjustments to our respective postures. All things considered, any taper was a welcomed signpost along the road and one we have expected. The most important thing – regardless of size, was the signal was made to the market.

Since the Fed aborted the September taper, we have been waiting for long-term yields to turn down. Historically speaking, one could argue that the move higher in yields in the10-year note has become as stretched as it has ever been over the past 50 years. If the Fed had tapered three months back, these pressures would have very likely relieved themselves by now.

We believe yields are going through a retest of their September highs. Although it’s not a perfect comparison – it’s the thought that counts these days, with respect to our more esoteric policies and their impact to participants downstream expectations. 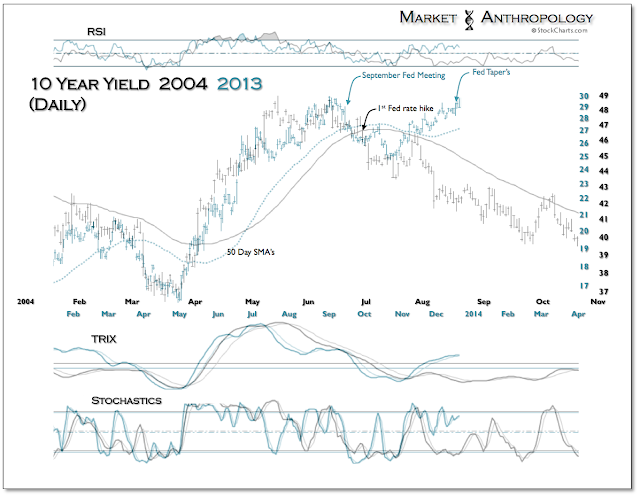 What has historically happened when the market digests the Fed’s move away from extraordinary measures? Yields come in, the bond market does well relative to equities and precious metals outperform. Even if QE is slowly phased-out as the Fed has decreed, it appears reasonable to believe that similar dynamics will develop sooner rather than later – considering how historically stretched the markets are today. 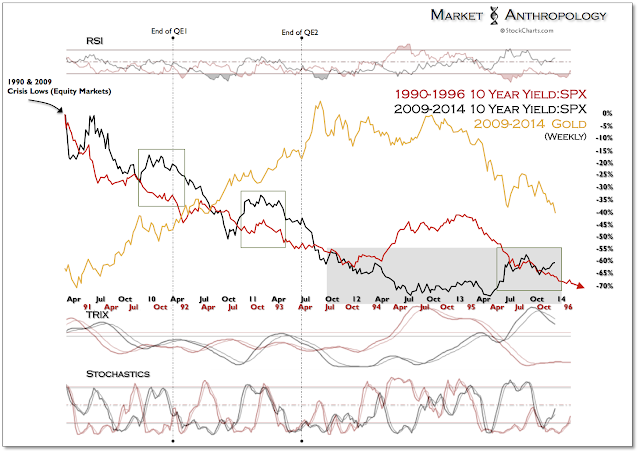 Gold and inflation expectations have been negatively impacted from several different sides over the past few months. A weakened yen, disinflation on our shores and deflationary concerns in China and abroad – to name just a few.  With a surging interest rate environment that has yet to subside, real rates have risen. The US dollar, typically the vampire slayer of secular trends in precious metals, has not played a significant role over the past year in the precious metals sector – rates have.

From a historical perspective, the correction in gold relative to yields is at an extreme commensurate with significant lows in gold. All bets are off if real rates continue to rise, but with the taper now written in the ledger and growth starting to reaccelerate here and abroad – inflation expectations should begin to turn up, perhaps quite considerably. Considering how stretched yields have become, the angle of incidence should equal the angle of reflection. 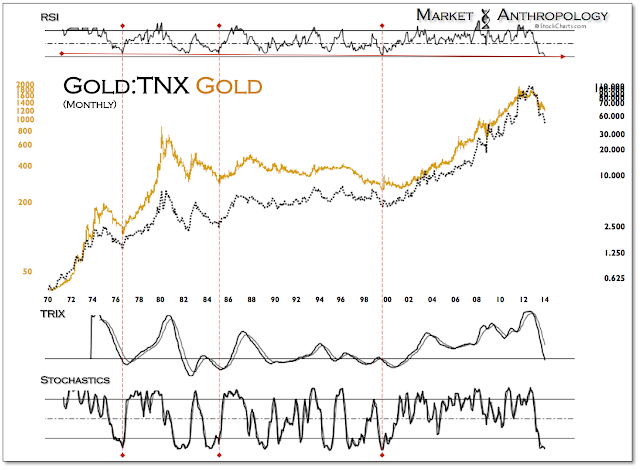 Some might be surprised to find that in a week which saw such pronounced weakness in gold – the silver:gold ratio was actually materially higher. We have favored silver relative to gold since this summer and believe that the current market has some similarities in this respect to the 76′ low in which silver bottomed several months before gold and where the silver:gold ratio was rising. 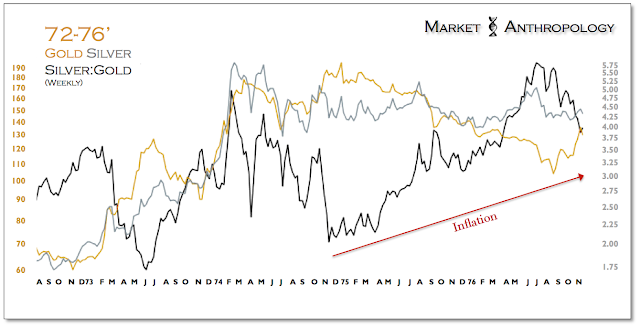 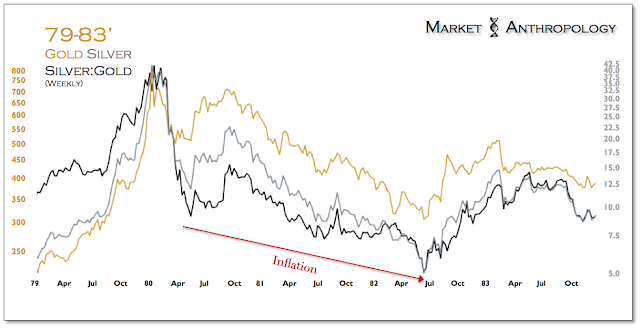 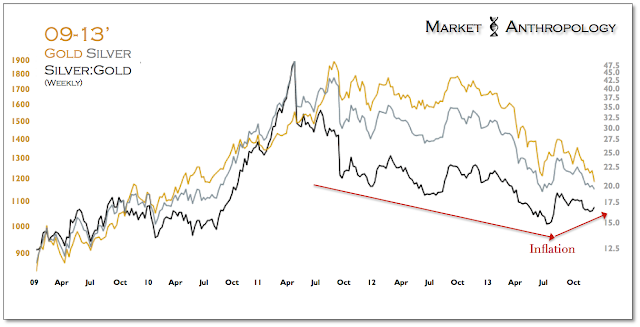 Once the dust settles from the taper, we will be looking for inflation expectations to reaccelerate. Concerns with our reflationary thesis would be heightened if the silver:gold ratio once again broke down. For now it continues to follow the script from our cycle comparative with the historic Nasdaq market. 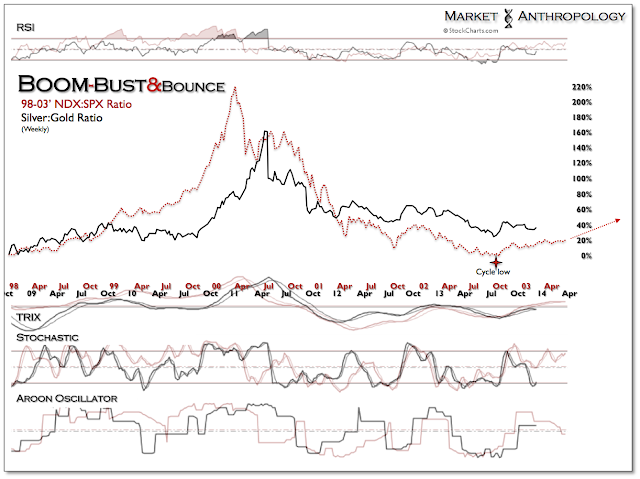 A quick look around the horn:

In light of the Fed’s actions this week, we believe that Santa may have come early this year. Although seasonality strongly favors equities throughout the end of the year, a broadening top formation – similar and mirrored to how QE3 commenced has been developing over the past several weeks. 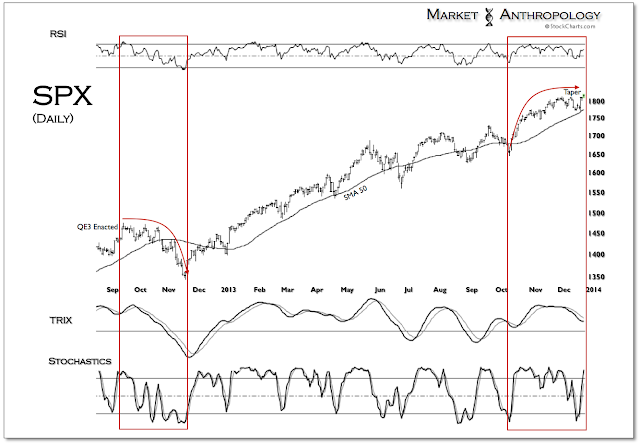 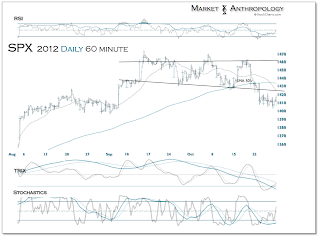 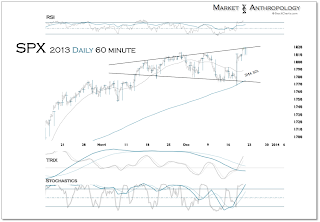 Our 95′ comparative performance profile has been an excellent guide for us throughout the year. Although we do not expect the market to break below long-term support (currently ~ 1596), our suspicions are the performance profiles will begin diverging early in 2014. 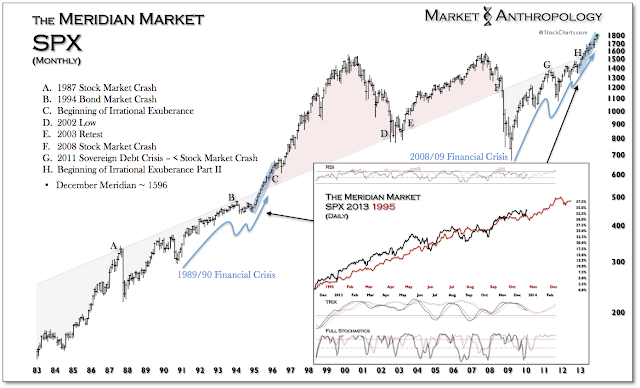 The Shanghai Composite Index had a poor performance this past week. Further concerns with their interbank market kept significant pressures on China’s equity markets. Although we are closely watching China as a key component and proxy for our reflationary thesis, we don’t expect to be eating any humble pie, served a la Krugman – anytime soon. 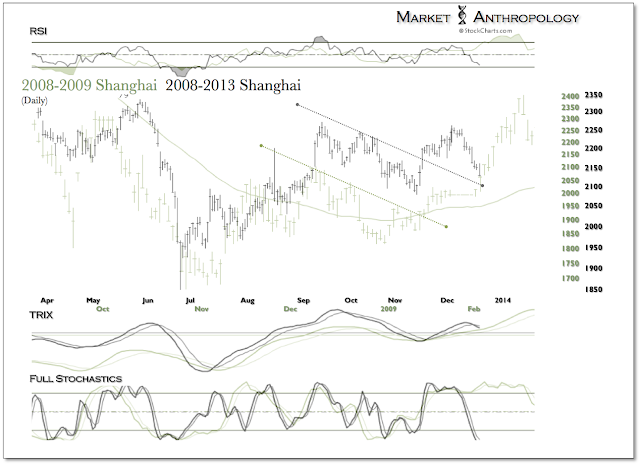 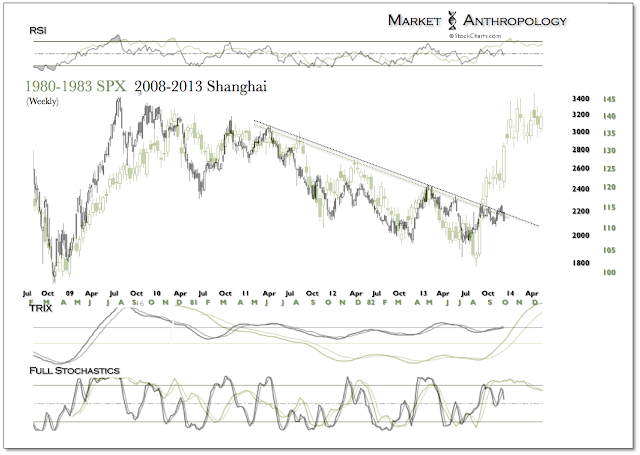 Officials in Japan succeeded at jawboning the yen lower with promises of further stimulus. Having said that, it’s influence on Japan’s equity indexes – specifically the Topix and corresponding ETF – EWJ – have been marginal. 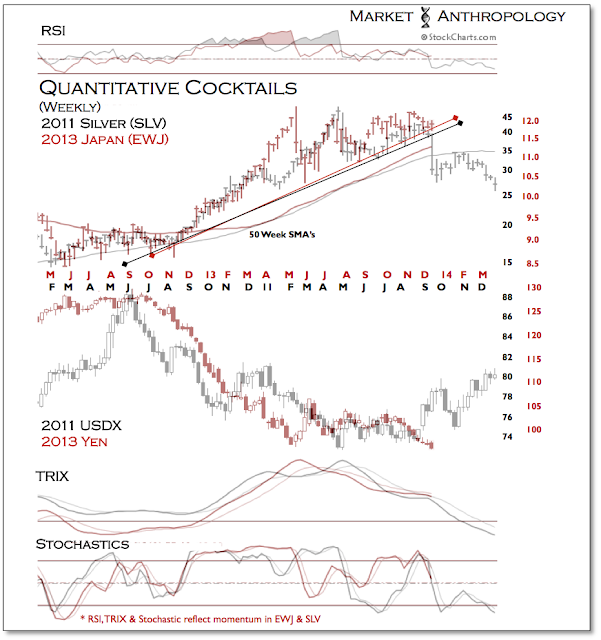 Not surprisingly, the bloom came off Apple this past week. Similar to the previous stairs it has climbed since making a spring low, a consolidation of recent gains was to be expected. 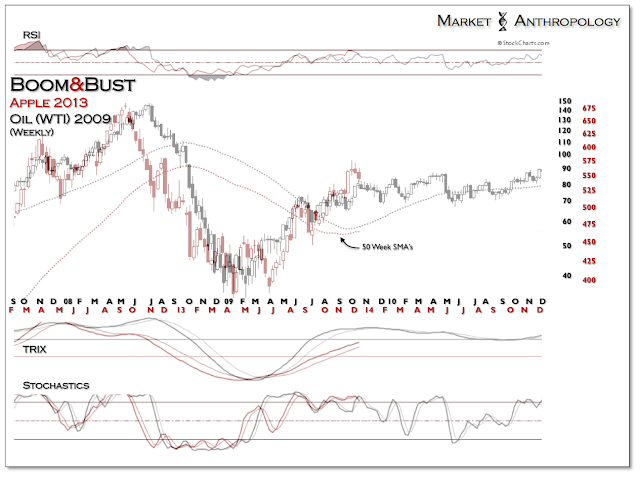 Wishing everyone a very Happy Holidays and a safe and healthy New Year.