I baptize you with water for repentance, but he who is coming after me is mightier than I, whose sandals I am not worthy to carry. He will baptize you with the Holy Spirit and fire. Matthew 3:11

I traded frequently (the less obnoxious cousin to HFT) through the financial crisis – to the tune of over two billion in gross proceeds – and came out the other side equally capitalized and a much better trader. Did it humble me at times along the way? Certainly, but what I learned from that historic volatility was that although an individual has the great advantages of dexterity and execution, it can also work against you when the pressures of volatility squeezes your positions at the edges of the range. You often hear traders say, “the market doesn’t care about you – your family, your feelings or your wallet.” While that is true in terms of your general well being, volatile and range bound markets, such as the one we are currently in – have a collective consciousness that is looking to squeeze you out of your positions, as the range expands or contracts. If you have weak hands or become seduced by indifference to the larger forces at work – it will inevitably become a humbling experience.
What I have attempted to do with this site is to give an unvarnished perspective of one traders debate with that consciousness and how I intend to argue (i.e. trade) against it. I will certainly bring my own biases to the table each week through the conclusions in my research, but I will float with the tide – even if it is momentarily squeezing me at the periphery. This is the difference between simply creating market research and identifying the challenges going forward with that research. It is always a process, and one that at times takes one or even two steps back – before finding yourself out in front of the wave. Like art – successful trading is never a painless or perfect process.
Recently, I have held out in becoming overtly bearish towards the markets for the simple fact that the trading environment presented qualities on both sides of the aisle. But as the market currently sits at a new weekly high from the crisis lows in August, that two-way street becomes less travelable. With that said, and from a sentiment perspective, I find that donning your bear attire is a more dangerous bias then the matador outfit we typically see cajoled in the financial media. Certainly it ebbs and flows like the tides, but these days with so many thunderclouds overhead – it is very easy to get lost in the darkness.
2008 was a historic market environment from a macro to micro perspective – but 2011 is shaping up to be just as intense and quite possibly even more complicated to interpret.
Why?
Because in 2008 everything cratered together.
Liquidity. Confidence. Expectations.
Today, we find ourselves dealing with the aftershocks of the crisis that emanated from the same source fault – but is hitting the major global economies differentiated and along a staggered timeline. This is due to a variety of factors that for all intents and purposes revolves – surprise, surprise – around debt and how well the respective economies have mitigated the effects of the credit crisis. The US, Europe, China and those emerging economies so tightly tied to the once burgeoning commodity trade, find themselves off balance and on their heels, due to policy decisions that inevitably become a step or three behind the market. Essentially it is once again creating a market climate that is susceptible – as it was in 2008 – to a negative feedback loop. The difference going forward will be in the contrasts of the respective economies structural and policy resiliencies. Unlike 2008, the US from a purely risks-from-recession perspective is much better equipped to handle slack in the global growth equation – should Europe fall into a recession. The health of corporate balance sheets and profitability are in the best shape in a generation. Certainly there are significant structural imbalances, as exhibited in the historically high unemployment rate – but overall, the excesses in the system have for the most part been squeezed out. We are still at risk to exogenous shocks out of Europe and China, but the effects should be muted when compared to the last crisis in 2008.
Although I utilize previous market environments for guideposts as to where the market may trade next – each market brings its own inherent qualities and challenges to navigate. For the moment, it is the asymmetrical growth and political structure of Europe that is bringing heightened volatility to the anticipated resolution. It has aspects of the same arguments our own politicians and regulators wrestled with in 2008, but the resolutions for these policy makers are even more difficult to execute – because there are so many disparate parts with equally disparate leadership opinions. On Friday, the headlines began the day anticipating no greater than a 30% haircut for Greek debt holders and ended the day with a number closer to 60%. All the while, the market exploded higher in the now Pavlovian reflex to the perception that any news is good news towards a resolution. While that may be true in terms of transparency – it remains to be seen which is closer to the truth – 30 or 60%. As we read the first impressions out of Brussels today, it appears the later is closer to the truth – but no one really knows at this point because the respective parties have become as reliable with delivering policy actions, as Gaddafi was at restoring his own regime.

The IMF would no longer be willing to pick up a third of the total bill for rescuing Greece, a contribution worth €73 billion, unless European banks were prepared to write off 50 per cent of Greek debt.
“It was grim. The worst mood I have ever seen, a complete mess,” said one eurozone finance minister. – The Telegraph

I believe that because of this opaqueness and reluctance by the EU’s leaders to embrace the totality of the crisis, the secondary indicators that color the sometimes discrete nuances of risk appetite (e.g. the gold/silver ratio) are indicating the market’s collective consciousness does not believe we are yet out of the woods and susceptible to languishing – or worse – expanding the downside limits of the range. 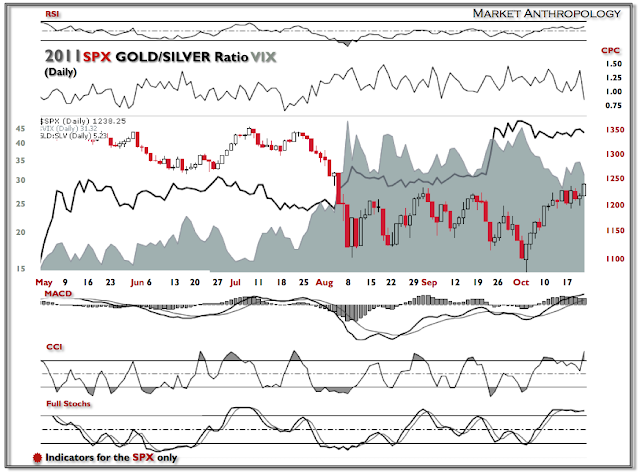 While the price structure in the comparisons to 1998 is eerily similar today, the underlying risk and volatility artifacts is quite a different picture. In 1998, indicators such as the put/call ratio, the VIX and the gold/silver ratio all retreated from their heightened levels of panic with the October low.
Today, the market is maintaining both its inertia in price itself, but also its momentum in volatility and risk aversion. You could make an argument that this could be perceived as a contrarian indicator more representative of the now growing Wall of Worry – but contrasting what we now know of Europe’s growing complexities along an extinguishing timeline, the congruencies to the financial crisis in 2008 and the poor breadth readings exhibited during the low in October (see Here) – I am very reluctant to chase the market here and willing to be squeezed by an expanded range. 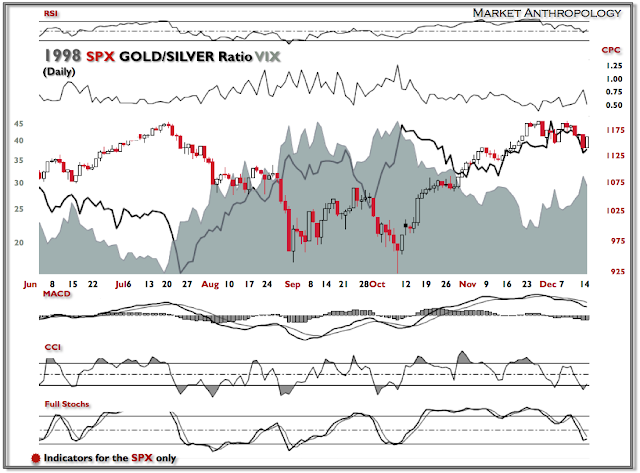 As mentioned in my note last Monday, the upside potential of the market would likely be closely tied to the dollar’s immediate support around 76. As of the Friday’s close – the dollar sat at 76.39. A further extension of the equity markets range will be dependent upon whether that support is maintained next week. My suspicion is that although we started to hear more details of further QE by the Fed, those plans would likely not materialize unless Europe once again looses their balance and takes with it the underlying confidence in the system. The fact that we started to hear those details with greater frequency last week, leads me to believe the Fed is planning on a rather disorderly climax for this round of the eurozone crisis.
During the eye of the storm in 2008, the US dollar index retraced 50% of its move from the April lows. As of the Friday’s close, the dollar has roughly mirrored the same retracement move.
Should the parallel reflexes of both crises continue to meet, I would expect another class of traders to receive a baptism by fire in the coming weeks.
As always – stay frosty. 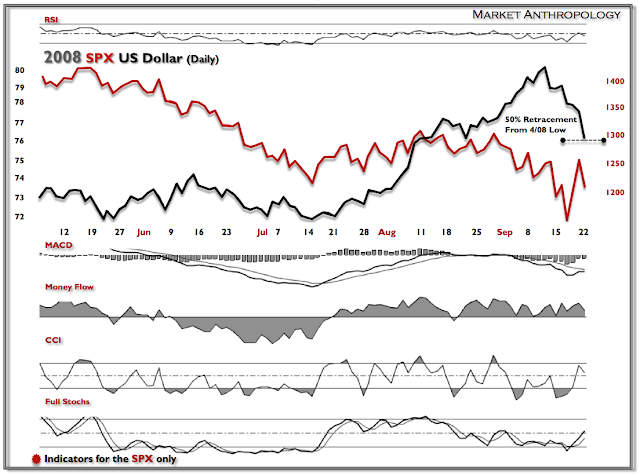 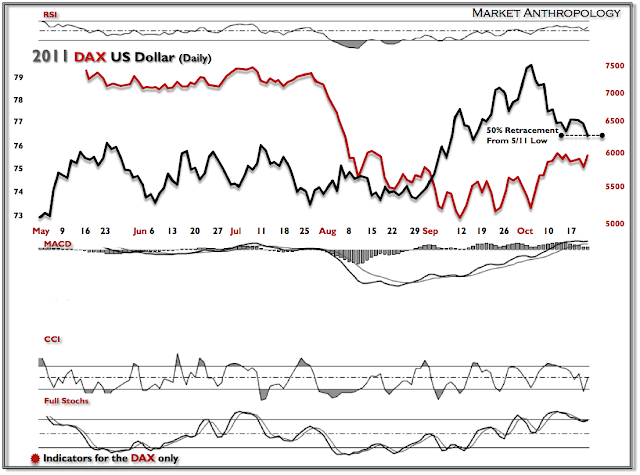