All Eyes on the ECB 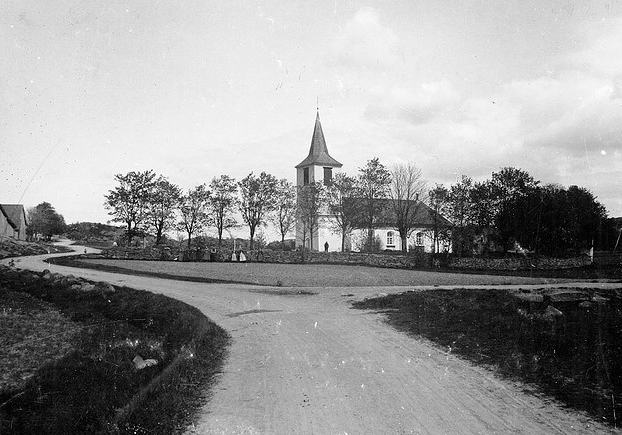 Despite finding ourselves on the right side of the tracks with European equities last year, we didn’t foresee that the euro would also turn down precipitously against the U.S. dollar, as storm clouds reemerged over the Old World and rose petals fell at the feet of our own monetary handlers. Granted, this correlation was evident and strongest going into last year between the higher beta markets in Europe (e.g. Spain) and it’s downtrodden currency – we just expected as deflationary conditions built on their shores, the euro would structurally be supported by such conditions. 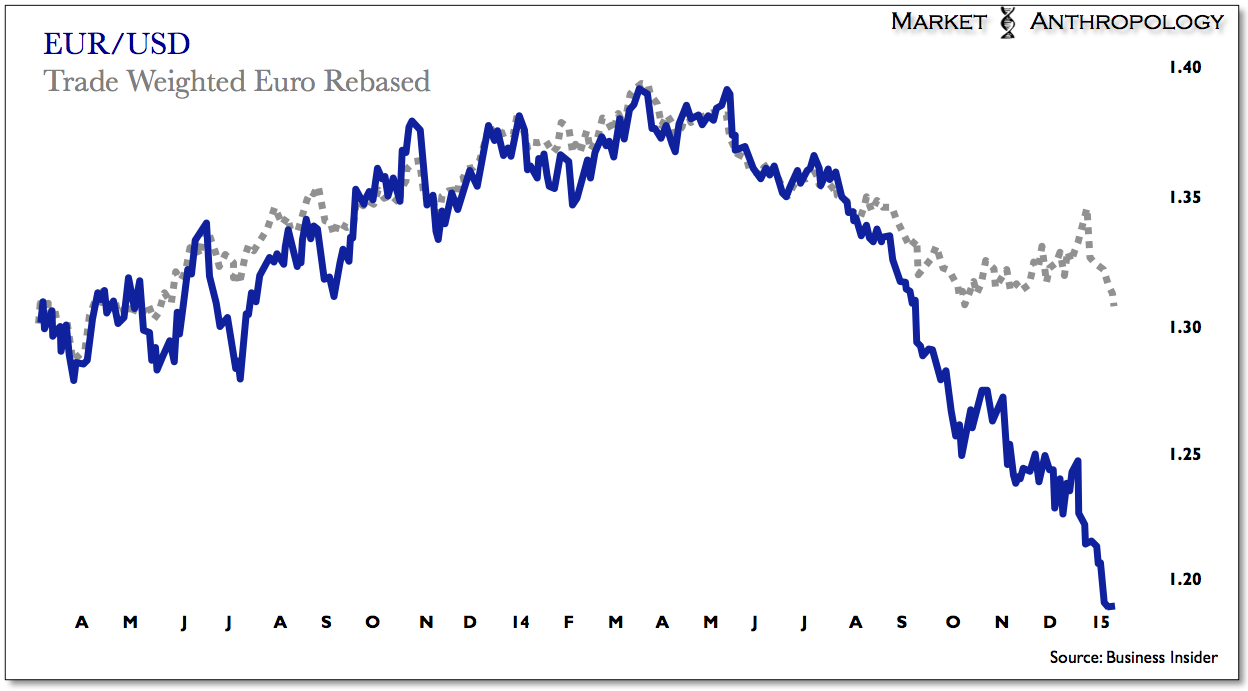 To a certain degree, this has been borne out in the market, as the trade weighted currency has held up considerably better than the EUR/USD exchange rate – that offered up a fire sale, ignited by the juxtaposition of misguided rate hike expectations in the US and growing uncertainty towards conditions in Europe. In hindsight, the uniqueness of the currency union itself has maintained an underlying existential cohesion, when considering cross asset correlations within Europe – especially, in a world supermarket with great demand, but with far less fresh assets to choose from. Generally speaking, since the financial crisis – so goes the sentiment vane in Europe… so goes European yields, equities and the euro.

This thesis trade in Europe has magnified since the financial crisis, with different fires breaking out in every year but one. It comes with more than a bit of irony and testament to the inherent design flaws of the union, that most economists chosen antidote for Europe – a weaker euro, has only been realized in market conditions with the greatest uncertainty towards its actual survival. In the past, when the markets were finally reassured by Draghi that he would enlist whatever-it-takes to maintain the union, bond yields and the euro sharply recovered – as well as their respective equity markets. Over the past several months, the markets have reflected great skepticism of the ECB initiatives and growing concerns with the politics both inside the ECB itself and the different member countries of varying governing and economic travails.

Coming into this year, we expected the heat to be turned up in Europe – and our equity proxy in Spain to continue wilting towards the much anticipated January 22nd ECB meeting, where Draghi may announce a large-scale quantitative easing program. For the most part, the equity markets have traveled down that path, which may present possible tactical shifts in the coming days and weeks as global markets react to what the ECB may or may not bring to the table next Thursday – as Draghi attempts to avoid what Krugman was concerned with in a preceding iteration many years before.

“The clear and present danger is, instead, that Europe will turn Japanese: that it will slip inexorably into deflation, that by the time the central bankers finally decide to loosen up it will be too late.“ – Paul Krugman – The euro: beware of what you wish for – Fortune 1998 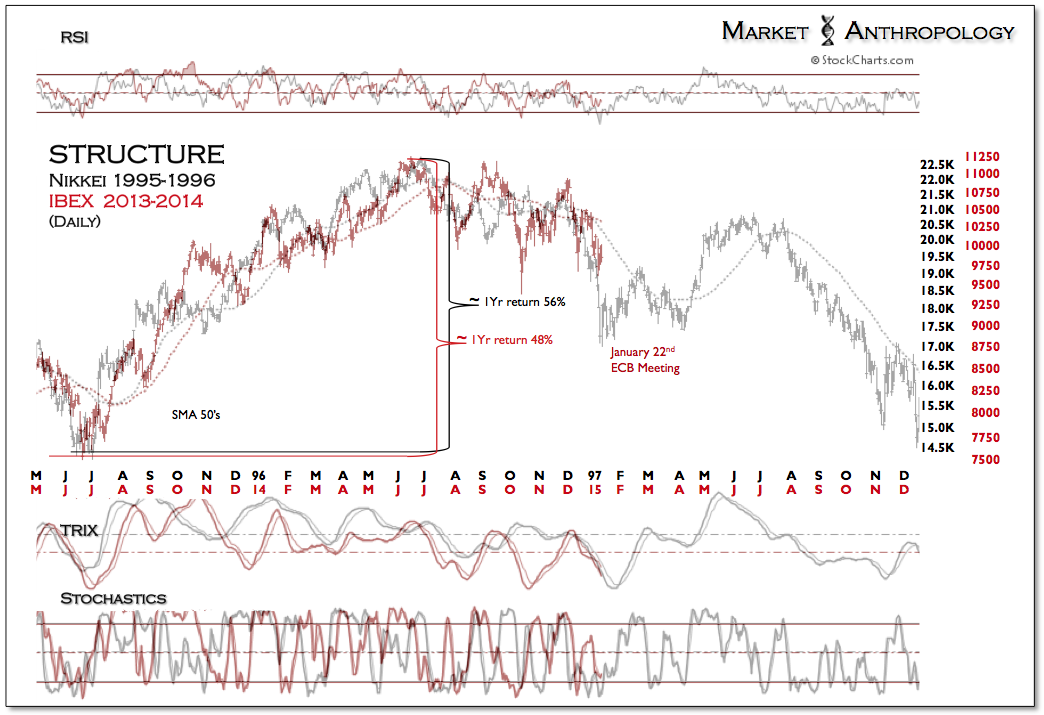 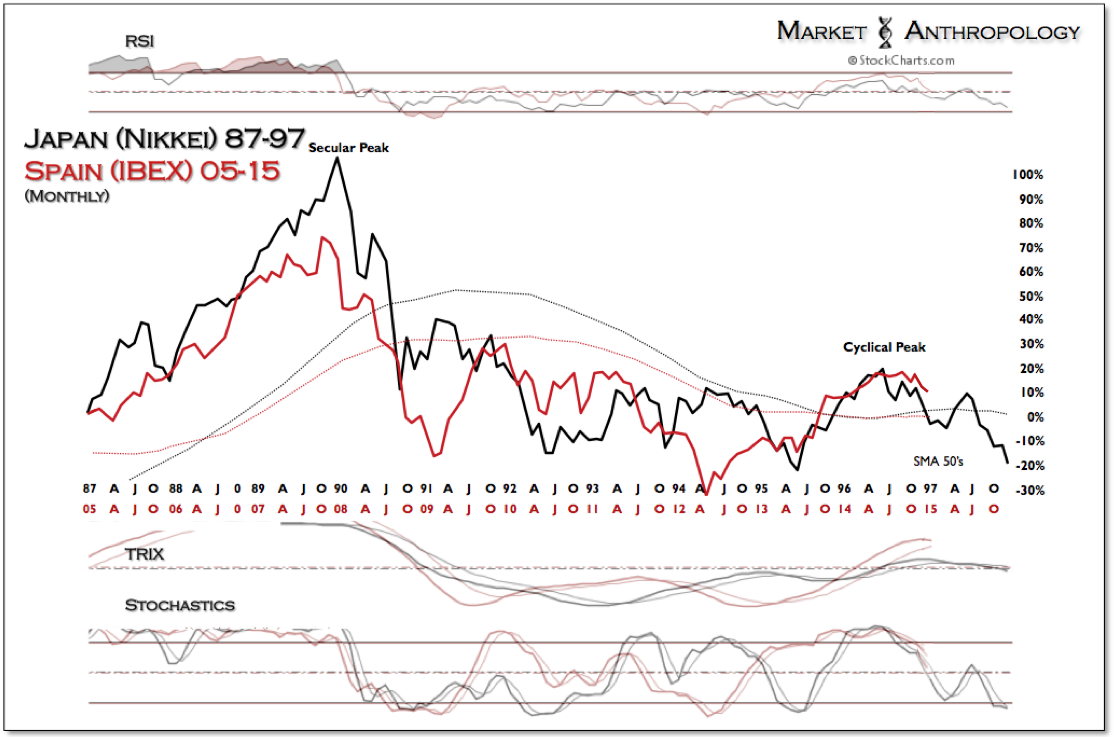 While the equity fronts in Europe and the U.S. prove less compelling along intermediate and long-term timeframes, respectively – actions by the ECB could provide a catalyst to lift yields globally – as well as the euro, which we suspect would be buttressed as it has in the past with major ECB initiatives. We say tactically, because from a long-term perspective, we still have our doubts that whenever whatever-it-takes is unveiled by the ECB, it can effectively address the structural design flaws that have continued to plague the currency union or the narrowing political realities that many countries now face. Nevertheless, we do see the plausibility that these actions could surprise and elicit a countertrend move in the bond market and continue to see constructive developments in the leading edge of such a reflationary trade; namely, in gold and silver.


Our long running comparative profiles for 10-year yields have been filling out the proportion of the patterns over the past three weeks. All things considered, we believe the lion share of the move lower in long-term yields this year is being completed, assuming Draghi steps up to the podium next week with significant action. 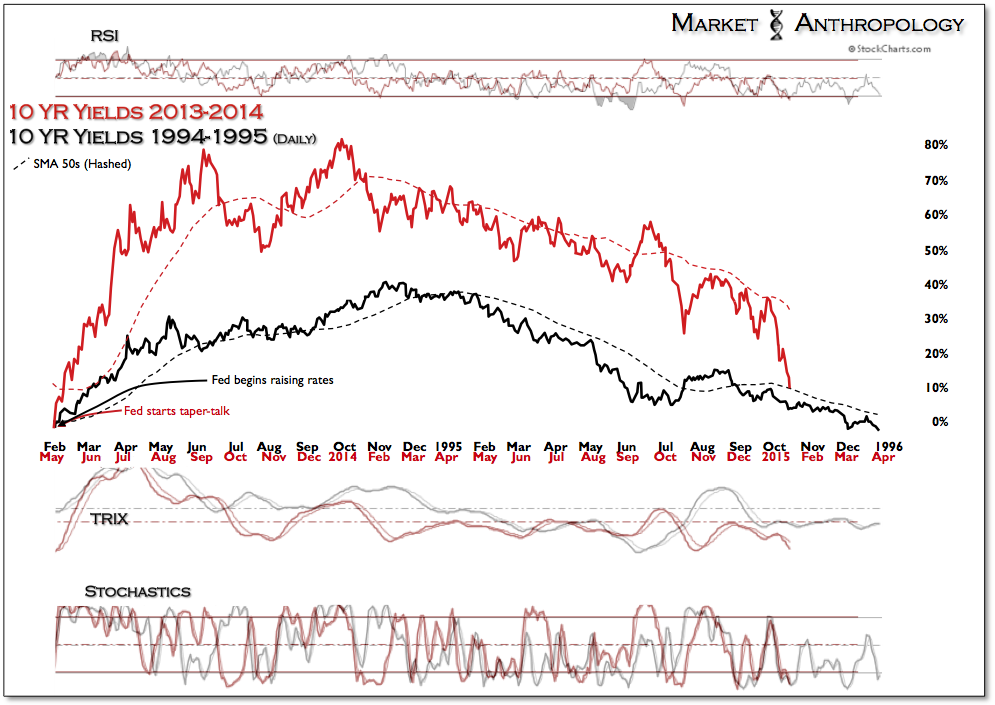 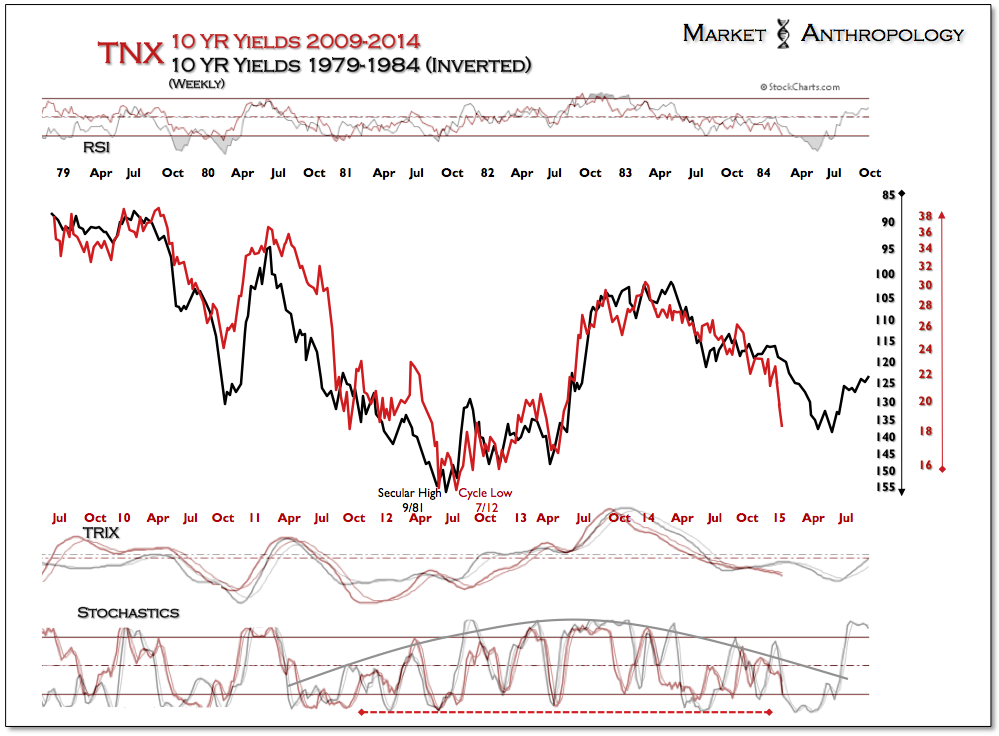 TIPS look attractive on an intermediate horizon relative to nominal Treasuries, with the more aggressive reflationary trade still found in silver then gold. Similar to the commencement of QE in the U.S., gold and silver are leading the prospective pivot, with the silver:gold ratio turning up after completing a retracement commensurate with the Nasdaq:SPX ratio, circa 2000 – that we incorporated as a signature of upside exhaustion way back in April 2011. 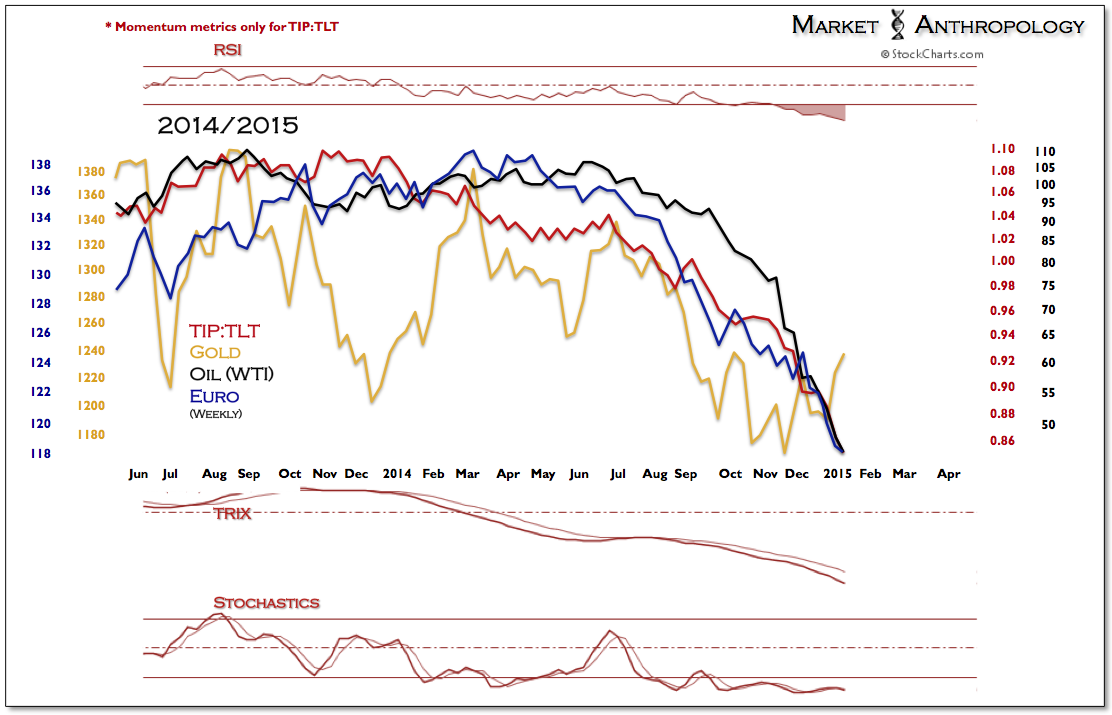 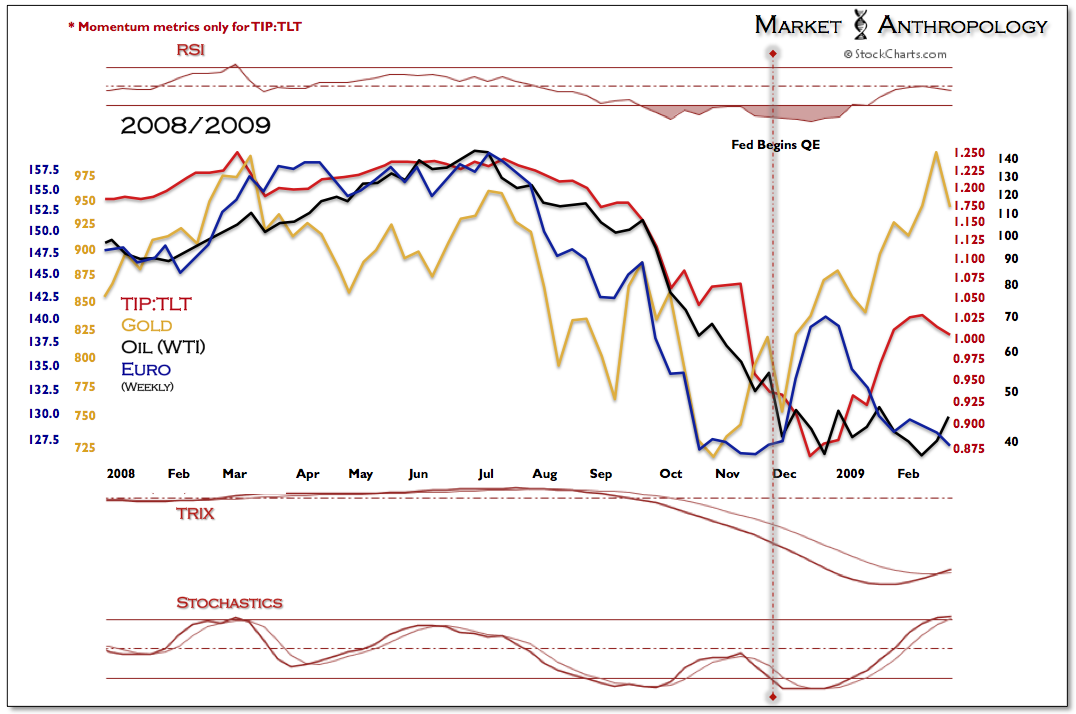 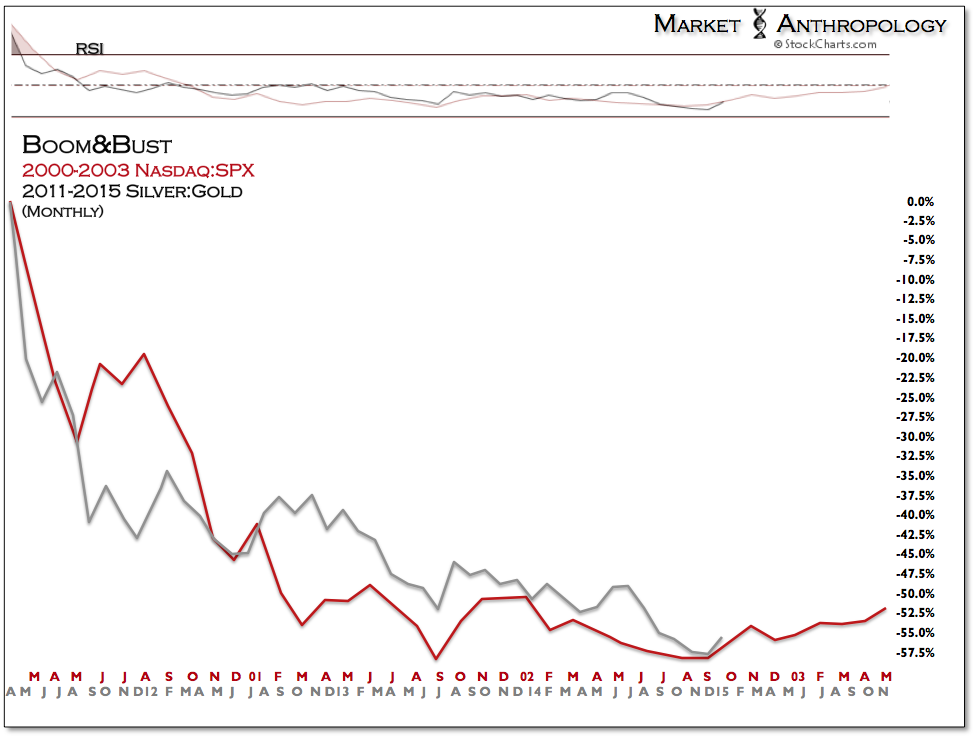 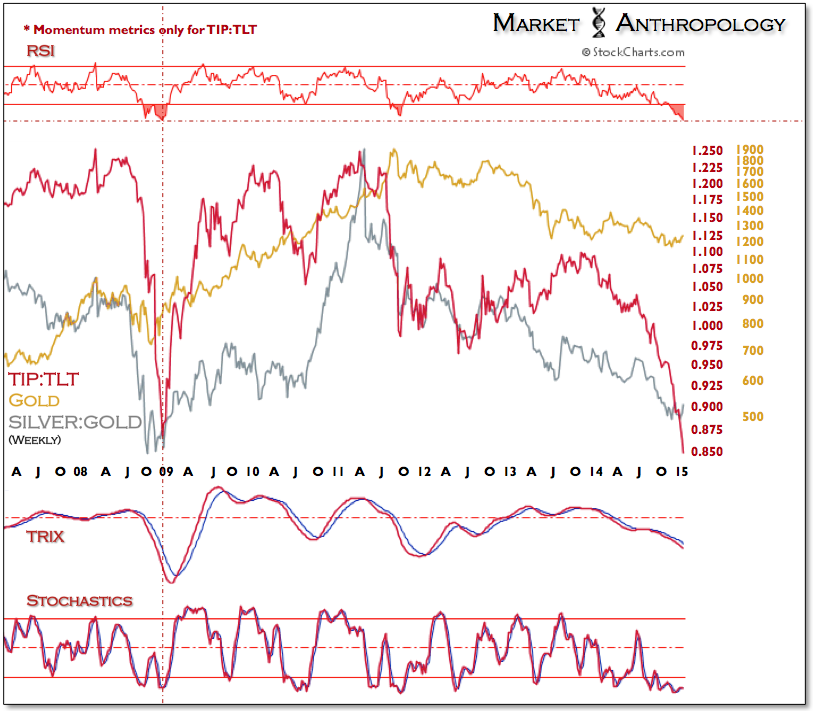 Although oil extended its decline last week beyond the 98/99′ comparative reversal, we still like the prospects of the commodity itself this year, which by most extreme measures has filled out the proportions of the retracement. 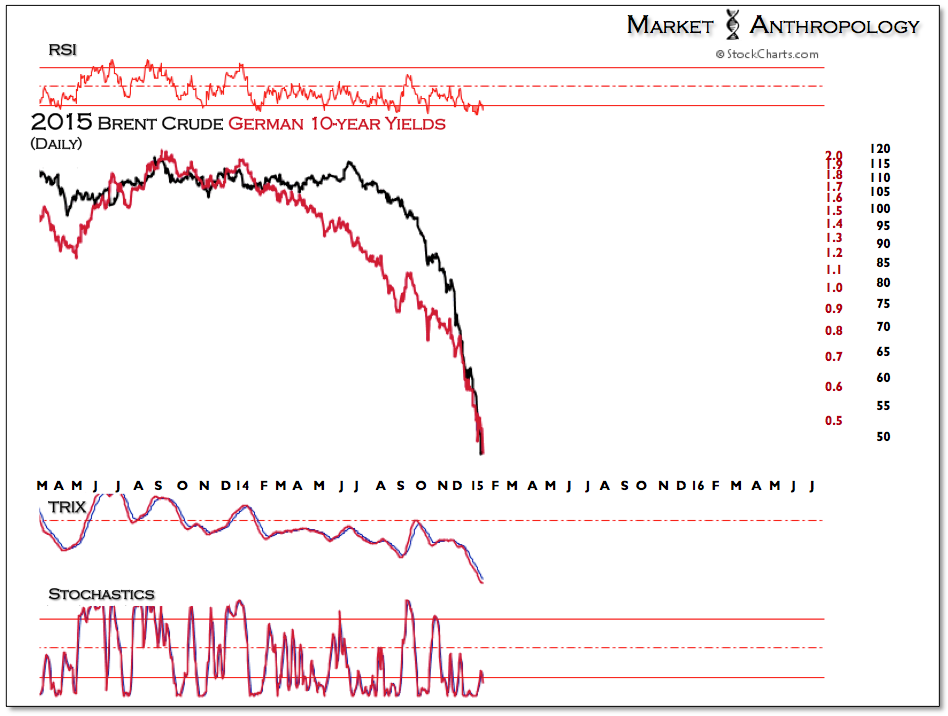 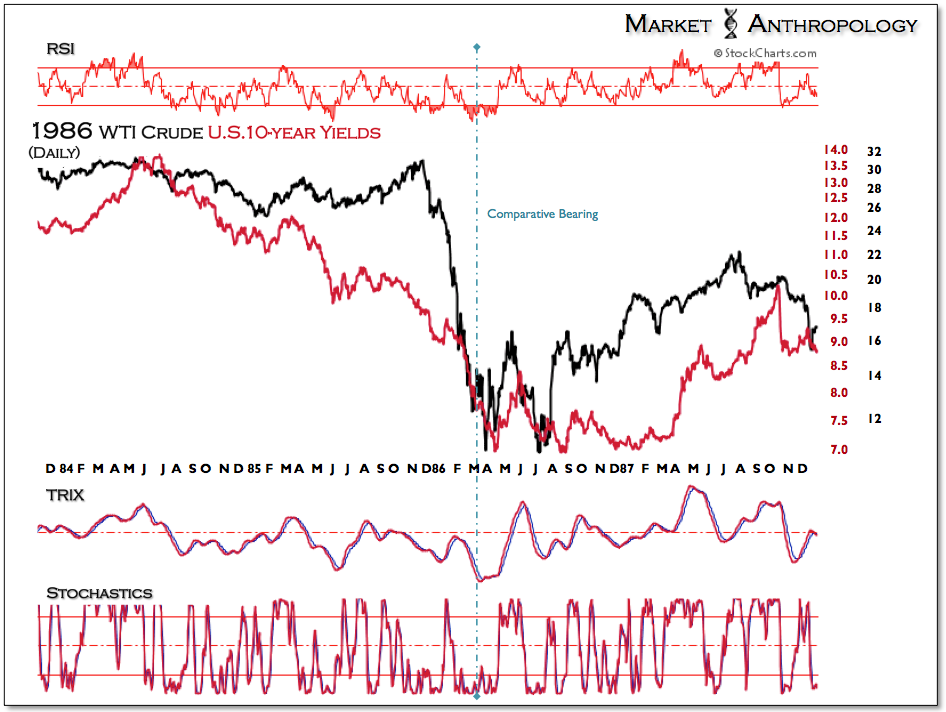 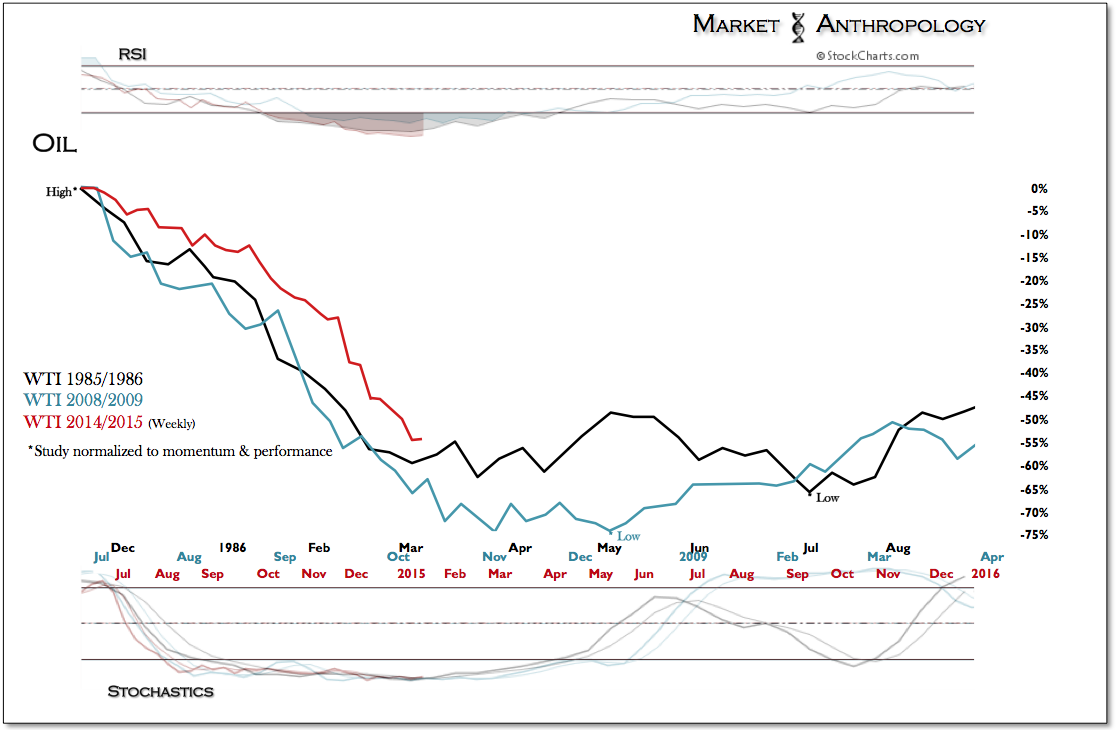 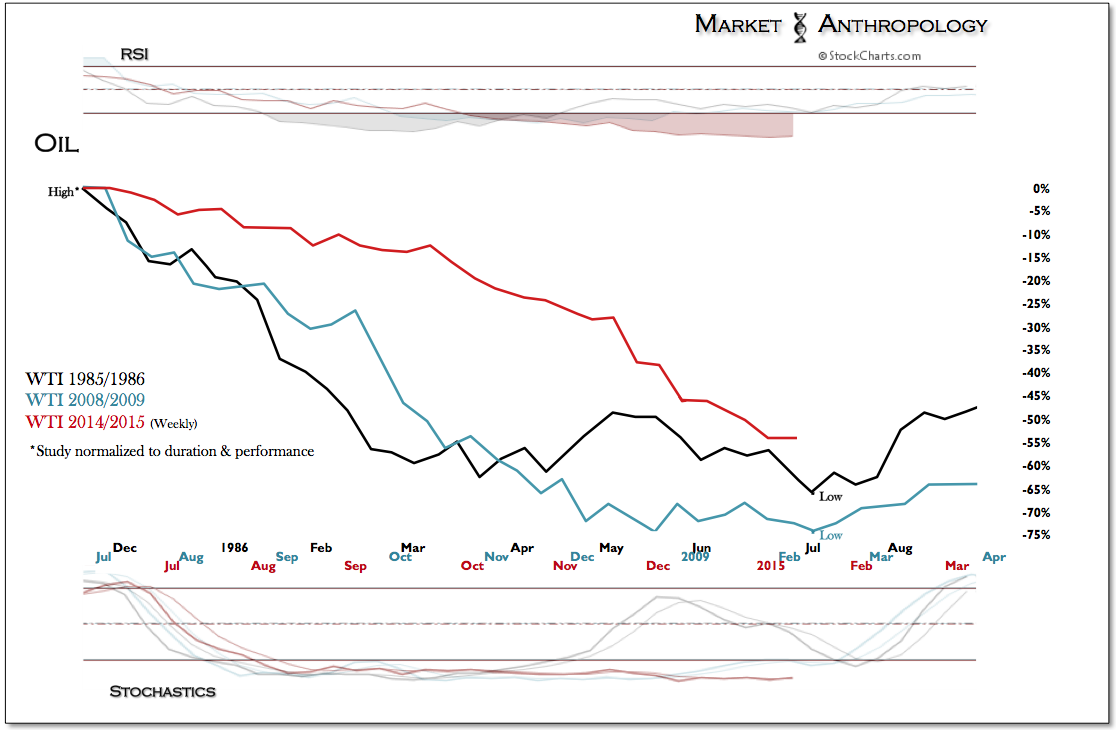