All Dressed Up with Nowhere to Go 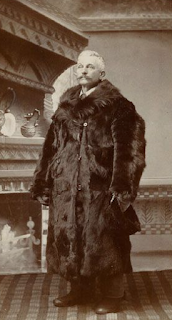 In difficult times, fashion is always outrageous
– Elsa Shiaparelli
Trenched for severe weather, we’ve all donned the thick wooly coat at times. Oversized and tailored for the apocalypse, bear fur goes on easy – it’s taking it off that’s the hard part. With more than seven years of daylight from the throes of the financial crisis, past traumas still haunt perceptions, through scars both phantom and felt.

Fool me once shame on you, fool me three times, well – that’s a trend.  Despite the incessant clarion calls from the deflationist’s camp that the waters are once again lapping at the levees, we see a more pragmatic outcome developing, one that turns the capital tide from our shores to theirs, on the back of a weaker US dollar and rising inflation expectations. “Theirs” – referring to those economies hardest hit over the past several years as the dollar became motivated by the apparent policy differential as the Fed slowly crept towards normalizing policy from their then leading crisis stance during the financial crisis. And while the hand wringing of a strong dollar has begun in earnest again as the Fed postures their next move, we continue to believe that the buck’s ship has sailed and is running downwind from its cycle high last year.

Jesting aside, these remain difficult times to navigate for investors and we understand why many believe that the table is set for another global crisis. Should the US dollar rekindle lasting momentum to the upside, we just might agree. But what we speculate they miss is the silver lining in greater market disequilibriums across the world in the wake of the financial crisis, that should help buttress growth and inflation expectations going forward as the US dollar comes off a cyclical high. While global growth certainly won’t benefit as robustly from the harmonic expansions of yesteryear, the collective capacity to turn down is mitigated as well, as we trudge across the transitional divide (see Here) to the next secular growth cycle. 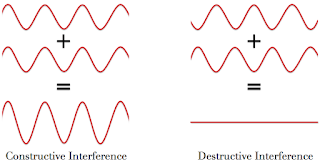 Whereas, in 2007 most of the largest developed and emergent economies where all cresting at the same time (i.e. constructive interference), today there’s much greater dispersion in growth tracks between developed and emerging markets, in part, because of the policy differentials set in motion during and after the financial crisis.

Whether it was cyclical happenstance or by design, these differentials have naturally affected economies primarily through the currency markets, with the US dollar exerting the greatest influence over the past two years, as the Fed gradually removed their extraordinary policy accommodations introduced and emulated during and after the financial crisis. As the dust settled, the net effect from this atypical and drawn-out process manifested with significant positioning and newfound strength in the dollar, arguably as extreme as the US Dollar Index exhibited at its secular peak in 1985. And while the deflationists have viewed dollar strength as the natural consequence of our collective and impending debt-ageddon, we view things more pragmatically as these market disequilibriums will invariably trend with greater cyclical frequency, as central banks modulate policy from extraordinary postures in the trough of the long-term yield cycle.


From our point of view, the biggest secular trend these days is the drawn-out structure of the long-term yield and growth troughs, that will likely continue to try both investors and pundits patience and play-books when contrasted with the past several decades of economic growth and corresponding market performance. That said, we find the phrase “secular stagnation” a bit misleading, as it infers a more negative tilt towards future expectations, rather than the reality of where the US and global economy sit in the long-term growth cycle. Semantically speaking, we prefer “transitional divide”, as it reflects the matured state of the economy – a natural condition, rather than a more pernicious economic malaise that many associate with secular stagnation.

Essentially, stagnation is in the eyes of the beholder – considering the greatest threat to the global economy came during the financial crisis when the composite contraction was magnified significantly by the alignment of our respective economic cycles. Since then, shorter-term reflationary and disinflationary subcycles have waxed and waned – but overall, the broader deflationary threat to the global economy has receded since the height of the financial crisis. And while the most recent disinflationary cycle mimicked market conditions representative of deflation (i.e. declining prices/stronger dollar), we primarily view this as a currency effect manifested from the Fed’s leading role in normalizing policy, which pushed the dollar and positioning to a relative performance extreme last year. As such – and assuming that the US dollar has crested, we continue to look to fade latent disinflationary conditions in the market, as we expect the pendulum will build on the reflationary trend already established this year.

Despite recent strength in the dollar that was largely anticipated this month (see Here), we expect the buy the hype (the taper) and sell the news (rate hike) reaction to win out, even as the Fed looks to another modest rate hike this summer. All things considered, while the thought of a rate hike might impression the dollar over the short-term, we find the wider macro view still broadly bearish over the long-term. 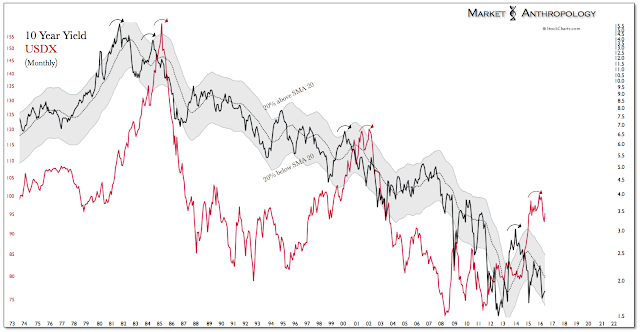 Notwithstanding the relative structural symmetry leading into the yield trough, comparatively speaking, the dollar’s move from Q2 2014 exhibited the performance extreme that in the past (1985 and 2009) marked exhaustion reversals. 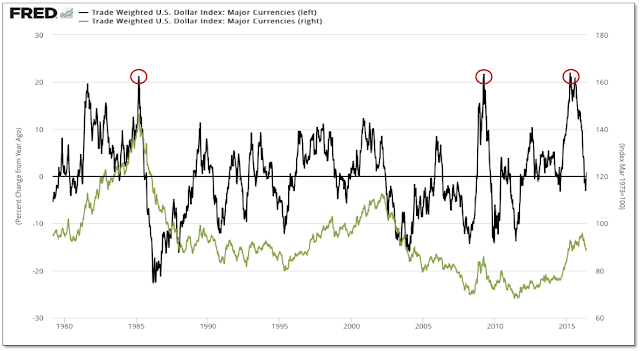 Although much broader in timeframe today, using the dollar index’s reversal profile from 2009 as our guide, the current retracement bounce developed along similar lines. 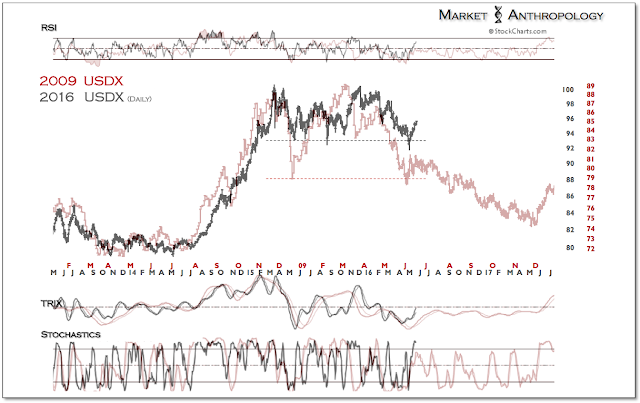 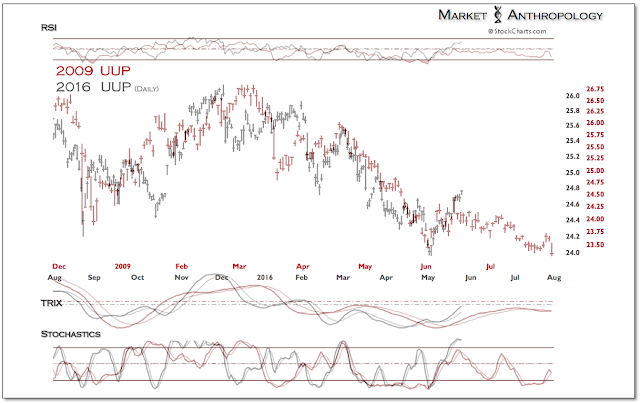 Following the fractures in the dollar this year, long-term Treasuries continue to trade in a broad topping structure, that may point towards a significant breakdown over the coming weeks (see Here). 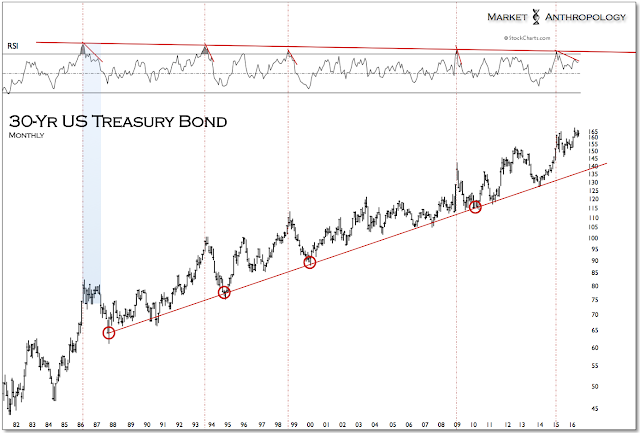 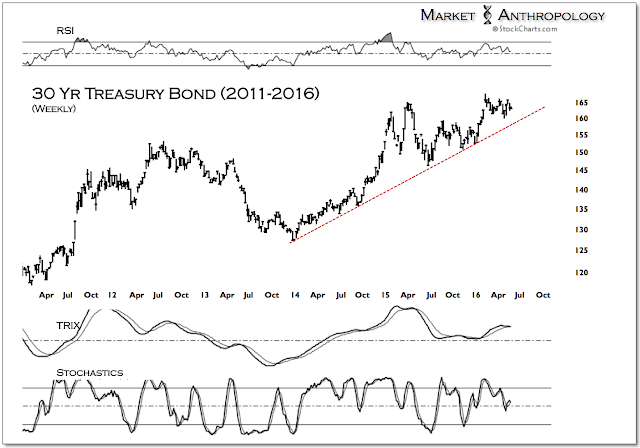 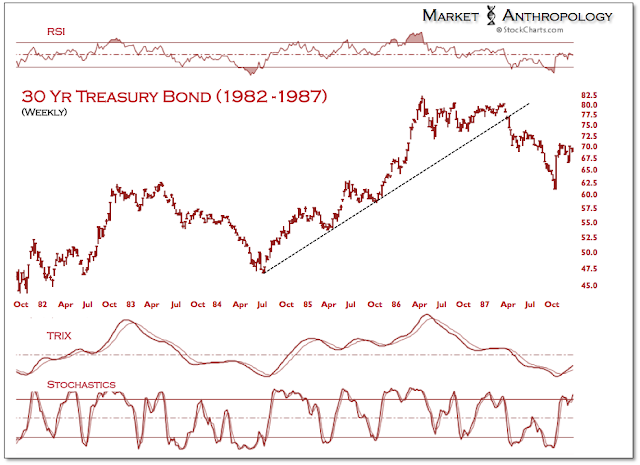 Despite some that believe a modest rate hike would elicit another move higher in the dollar, we suspect the opposite will unfold as the deflationary cookbook that saw bonds, commodities and currencies reach relative performance extremes – completes the broad reversal that began last year. 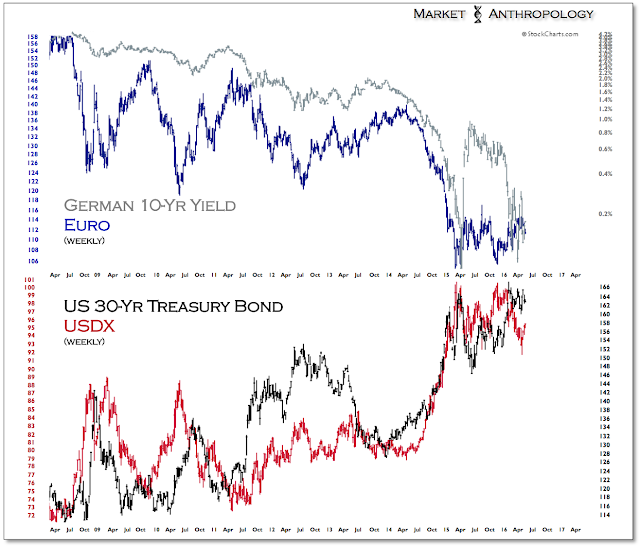 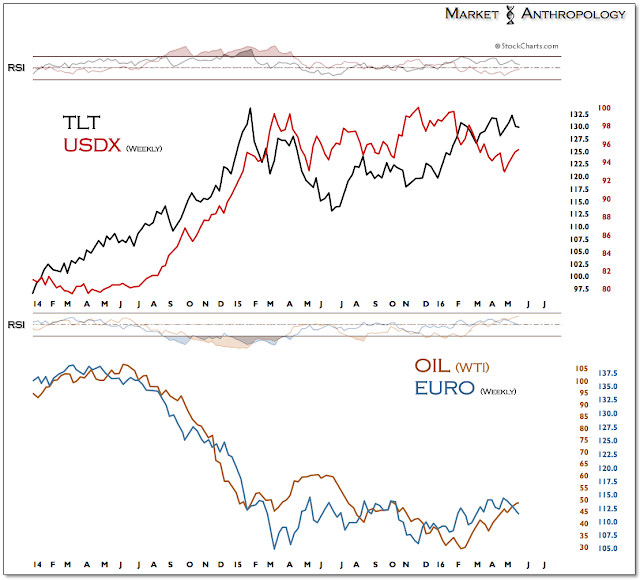 Not surprisingly, gold, which had led the broader reflationary trend since the initial rate hike last December, has retraced the entire move from earlier this month. Should the dollar begin to weaken again, we suspect that similar to the resumption of the uptrend in July 2009, gold will find support around current levels. Over the past several weeks, the inverse correlation between gold and the US dollar has begun to tighten again, which we expect will be bullish for gold and commodities in general. 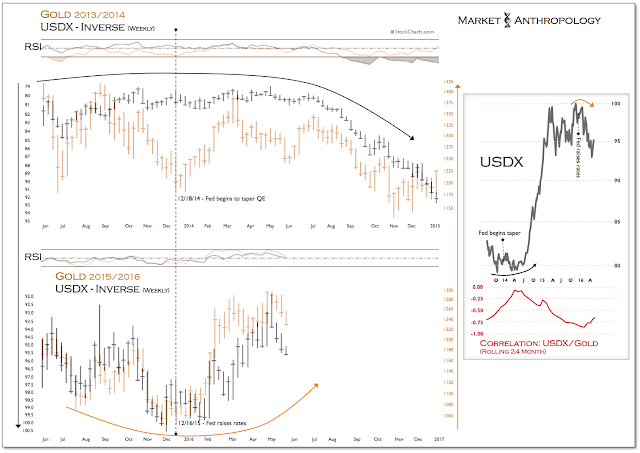 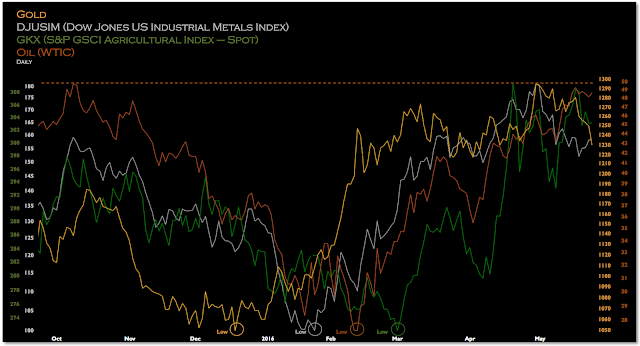