“The one who follows the crowd will usually get no further than the crowd. The one who walks alone, is likely to find himself in places no one has ever been.”         – Albert Einstein

When it comes to the financial markets there’s as much madness in crowds as there is wisdom. Granted, most times the trend is your friend and easiest passage, that is – until it’s not. Successfully navigating the shoals of this dynamic shift is forever the challenge for professional money managers. Tact to early and spill the wind and you run the risk of aimlessly drifting out to sea. Stay the course through the inevitable storm and you danger the lives of the passengers and perhaps sink the ship.

Writing for Bloomberg View this past February, Noah Smith aptly described the subtleties of crowd psychology when applied to finance.
Why are crowds sometimes wise and sometimes mad? Social scientists already have a rough idea of the general answer to that question. Crowd wisdom works because people’s mistakes are haphazard and uncorrelated. Everyone’s guess is a combination of signal and noise — we have some idea of the real weight of a cow, or the real value of a stock, but we also have our own wrong ideas and preconceptions and irrationalities. But because my errors aren’t the same as yours, when you and I combine our guesses, the true knowledge shines through while the random errors tend to cancel out.
But when the people in a crowd communicate, their mistakes are no longer uncorrelated. When one person’s misjudgments influence another person’s thinking, the errors can snowball and wreck the whole forecast. Any number of studies confirms the general principle — once people start talking and arguing and persuading each other, crowds turn into herds, and the magic disappears. – The Wisdom and Madness of Crowds
These societal tensions are also neatly distilled by Soros’s theory of reflexivity, where a distinction is made between the objective and subjective aspects of reality and the feedback loops that materially influences and affects both sides. The subjective refers to what takes place in our minds, the objective represents what takes place in external reality. Soros suggests that when it comes to the financial markets, the fundamental value of an asset is always being weighed by our collective and subjective reasoning. In essence, our perception of an asset literally shapes its worth, which in turn can further influence our expectations – often times reinforcing a feedback cycle. At the crux of the theory is the belief that inevitably a distortion and divergence from realistic valuation manifests, which Soros looks to exploit at different points along the behavioral continuum.
Where we’re going with this – if you haven’t already guessed… is that we have a strong suspicion that the wisdom of crowds today in stocks has created enough distortion from reality that it makes sense to walk away from it. Whether it’s the belief that US equities are under a more secular persuasion higher – which from our perspective is strongly rebuked by our historical understanding of the long-term yield/valuation cycle; or that parts of the world, namely Europe, represents great opportunity relative to US markets – the fallacies of our collective assumptions have been reflexively interacting, resulting with arguably the second highest valuation for US stocks in history and a gathering of investors now in Europe that appear to have quickly forgotten the real structural challenges still within the EU and that perennial asset unwinds have very long tails across very long timeframes. 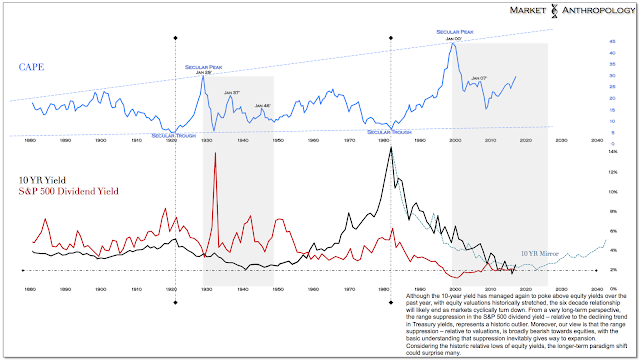 Last June, we took a look at Spain’s IBEX, which appeared to point towards an interim low with the possibility that its cyclical decline had run its course. With a little less than a year from that observation and with a more than 45 percent rally in the IBEX from the post Brexit lows of late June, the window to buy into the reflexive rally appears to be closed. In fact, when contrasted with the historic perennial unwind of the Nikkei that we’ve followed and utilized for guidance in Europe over the past 4 years, the IBEX’s swift retracement rally has already met the comparative highs of the Nikkei in late March 2000. The retracement level represents both a long-term technical and sentiment hinge, as a potential higher high of the IBEX’s broad inverse head and shoulders would be a bullish long-term development, reinforcing the markets reflexive tendencies already in play. 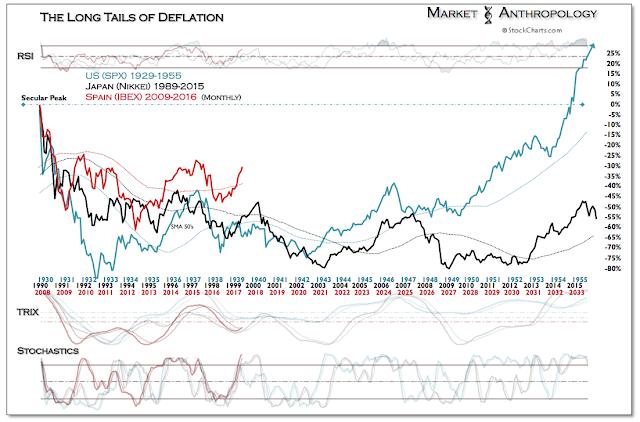 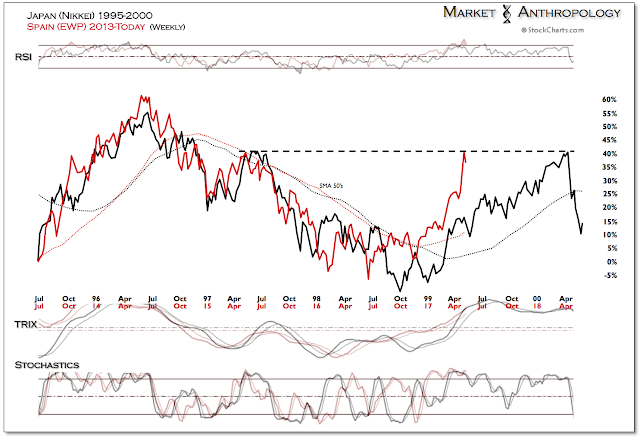 That said – and why we incorporate historic comparative trends as guideposts in the road, we’re more inclined to view the rally as advanced with a greater possibility that the more bullish assumptions made of Europe have been predicated on false hopes. Considering the recent collapse of the gap between “soft” and “hard” data here in the US, hope certainly wasn’t in short supply. Is it enough to keep the cycle going? We wouldn’t bet on it.