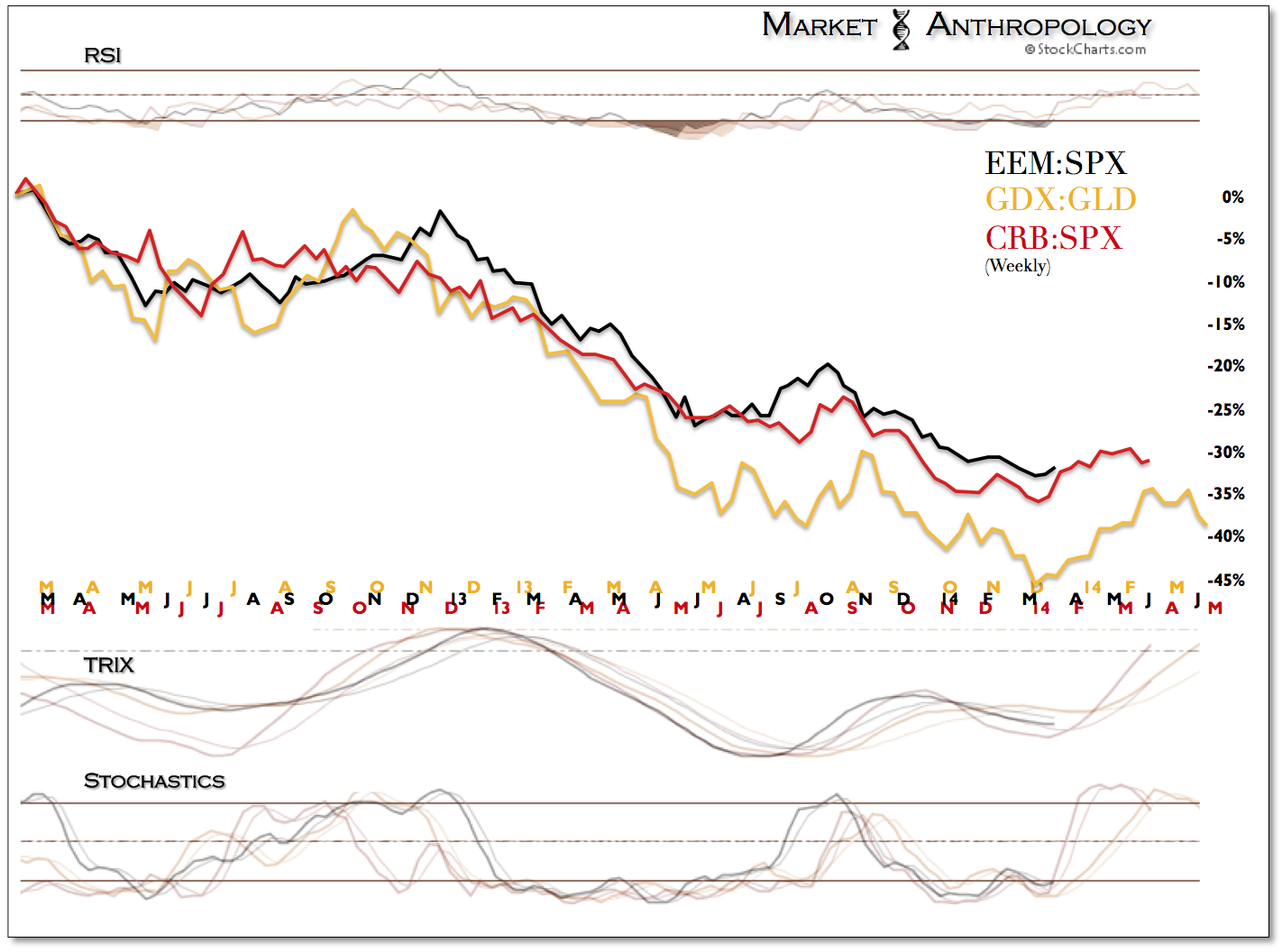 On a relative performance basis we continue to find a discretely transitioning market environment, led by the move in commodities – which first tipped its hand last year in the precious metals sector. While Goldman was out this week (see Here) casting causations at the foot of weather for the strength in gold over the past few months, we see things quite differently and from a more methodical and endogenous perspective. From our point-of-view, these developments – namely the bid in precious metals, commodities and now emerging and Chinese equity markets, has been a long-term cyclical development and not an impulse driven phenomenon. 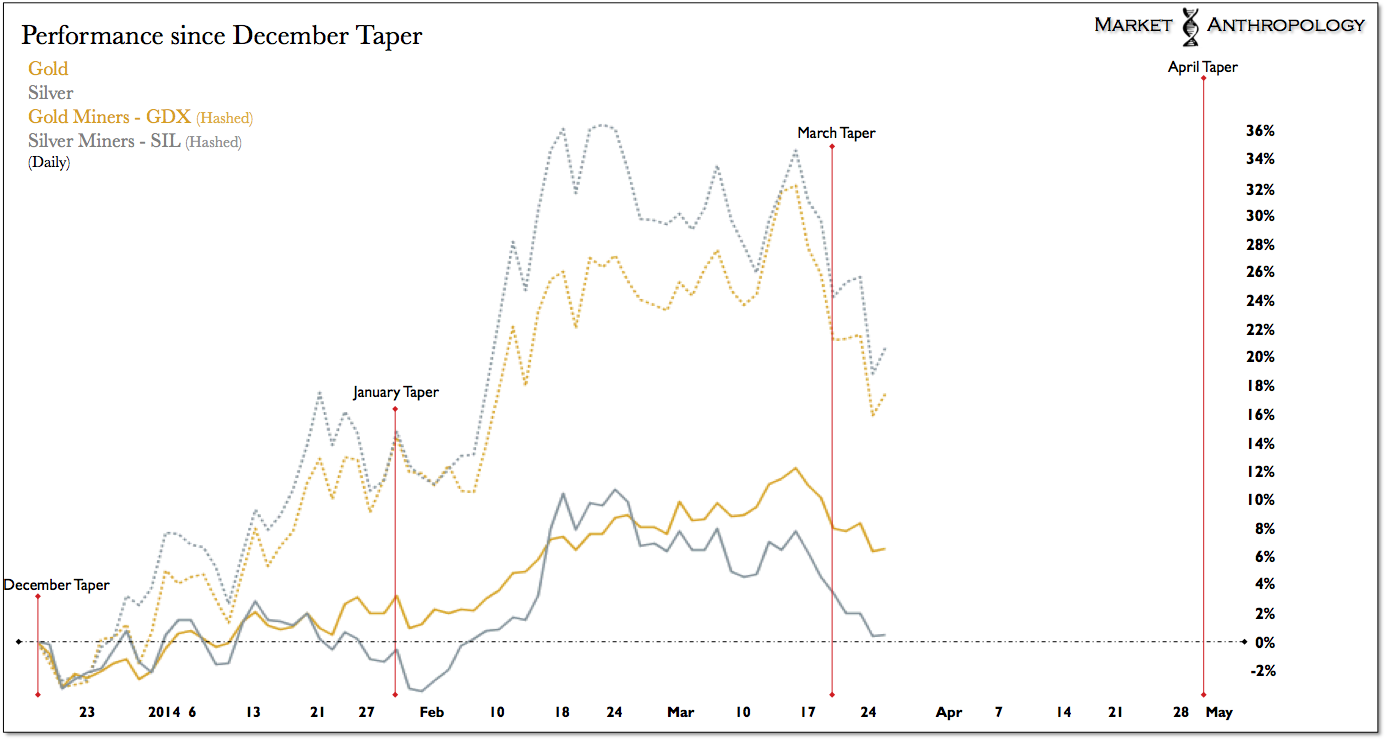 Although gold and silver continued their retracement declines in the wake of another taper, we expect these moves will reverse in the near-term and still favor the asset class and their respective miners. 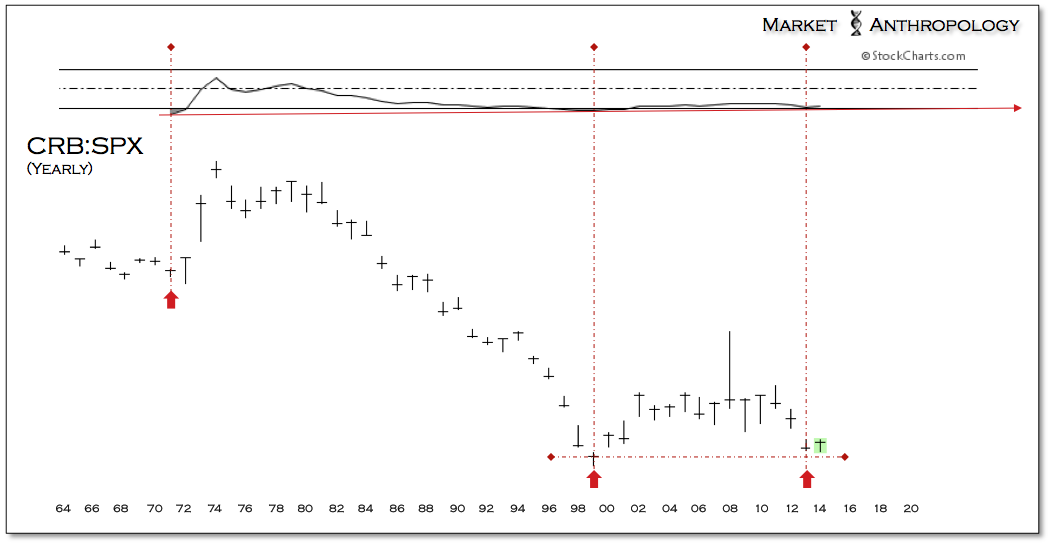 As we pointed out in previous notes (see Here), on a very long-term horizon the CRB relative to equities tested the secular low and found strong support. While the consecutive tapers by the Fed has provided monthly anxieties towards the investment thesis, the broader takeaway has seen assets tied to rising inflation expectations strengthen as the Fed moves further away from their extraordinary accommodative policies. 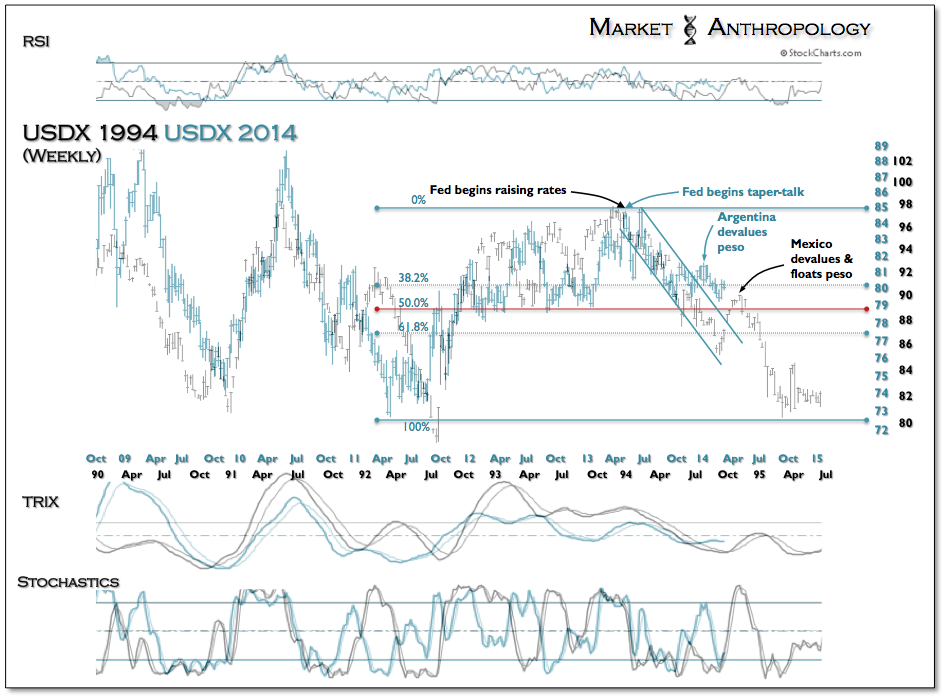 This has been borne out as well in the currency markets at the expense of the US dollar, which has provided a tailwind to the euro and those currencies derivative of commodity market strength. Framed in a strongly inverse relationship, the current long-term disposition between the CRB and the US dollar index sits at a relative equilibrium within its narrowing range. We continue to expect that the US dollar will break down out of this equilibrium – as the CRB turns higher from its recent cyclical low. 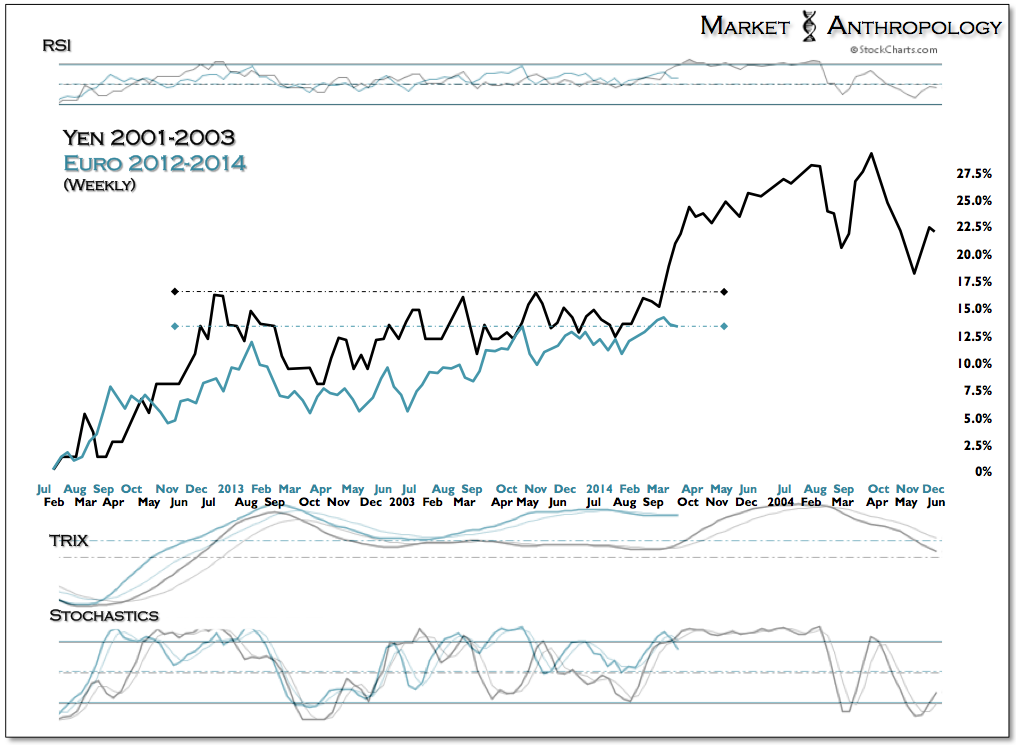 The euro has benefited from both the long-term cyclical trends in the US dollar – as well as the underlying and more structural deflationary forces prevalent today in the eurozone. This morning we received the latest indication that the ECB was considering a less traditional approach to mitigating the “excessively low” inflation conditions. Erkki Liikanen, Finland’s central bank governor was quoted as saying, “If you want to tackle the issues with traditional monetary policy, then you should be able to cut rates further. We are at low levels but we haven’t exhausted our maneuvering room.” He went on to say, “The question of negative deposit rates, in my mind, isn’t any longer a controversial issue.” Similar to Draghi’s comments a few weeks back and a microcosm of the broader troubles facing weakening the currency, the euro momentarily sold-off – but recovered swiftly.

Our expectations of a cyclical low in emerging markets (EEM) and Chinese equities (SSEC) – relative to the SPX, is finding greater traction this week and now presents a positive performance throughout the month of March. Peripheral to these developments is the fact that the CRB relative to the SPX has returned ~ 6% this year, while gold relative to the SPX is up over 7.5%. 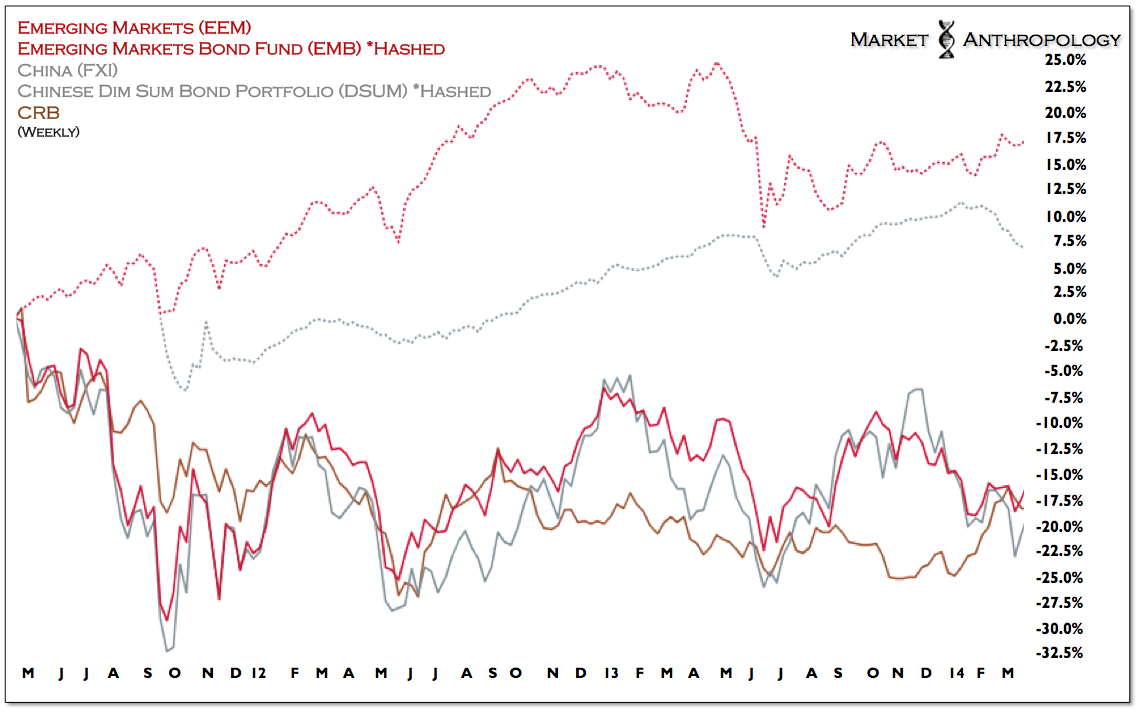 As much as we recognize the wide performance divergence between emerging market and Chinese equities and their respective bond markets, a more simple explanation is that the longer-term prospects of these sectors still have further road to travel – as evident in the dogmatic institutional fingerprints that have yet to abandon the story. Considering our longer-term impressions on the commodity sector, it makes logical sense to infer at the very least a relative strength developing in emerging markets – which often derive significant support from the broader commodity story. 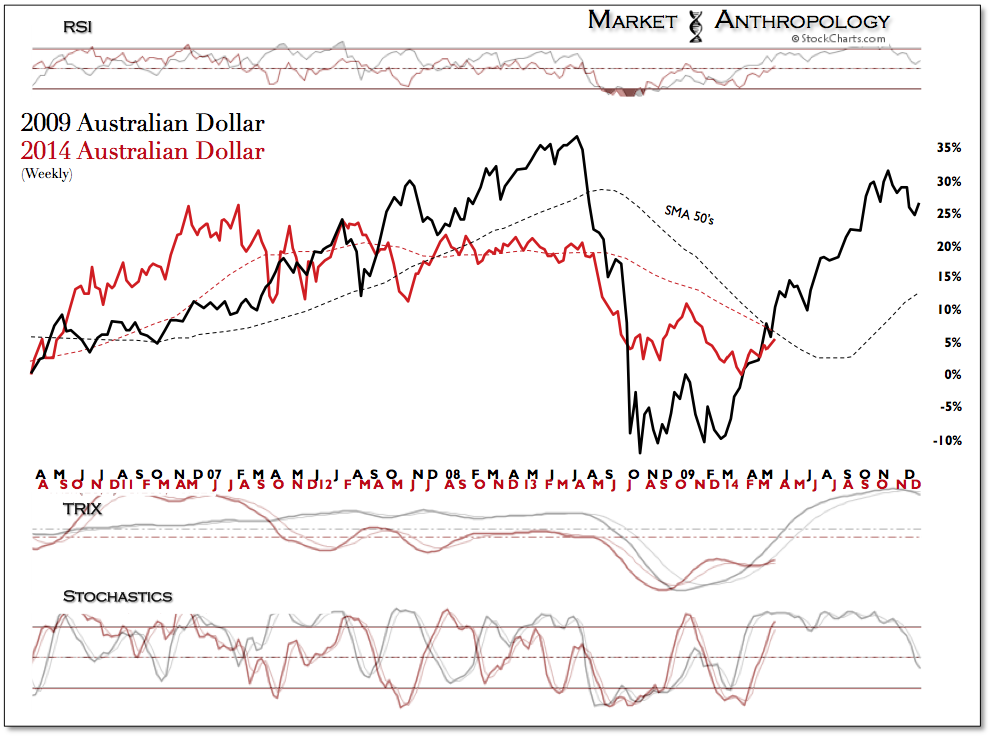 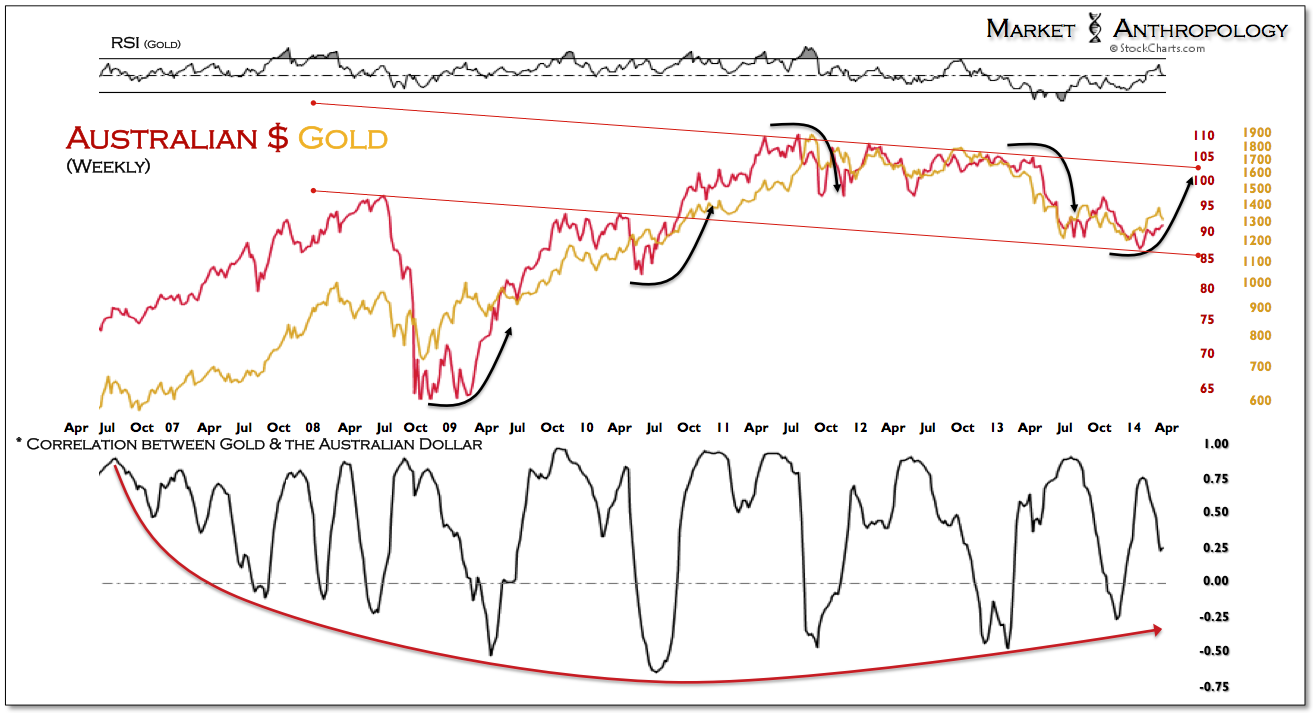 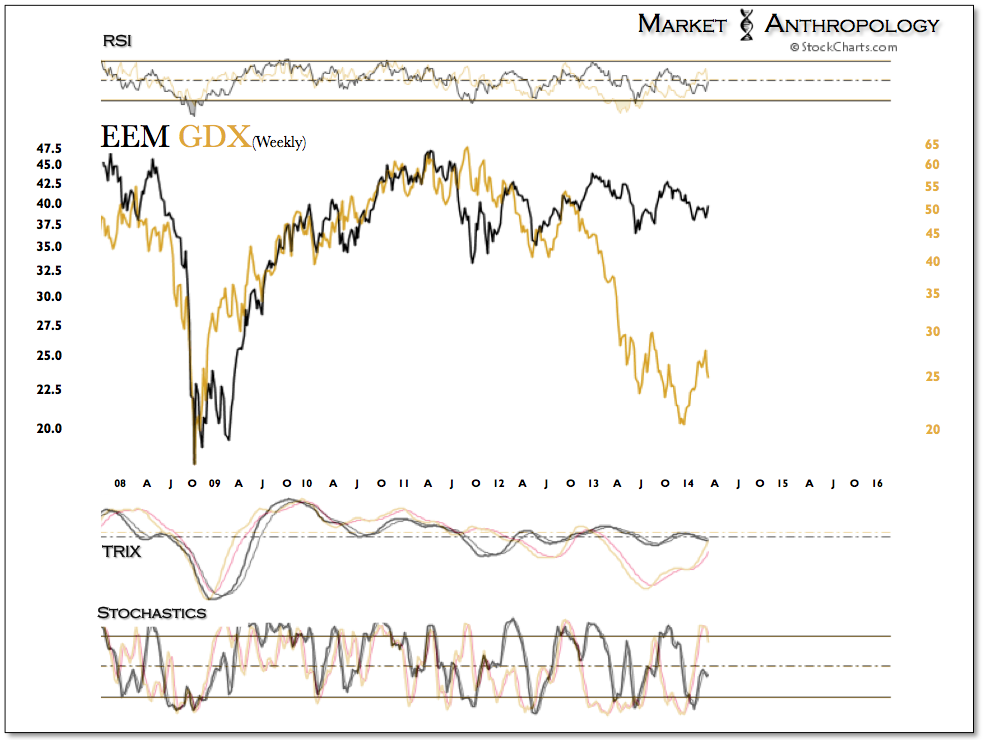 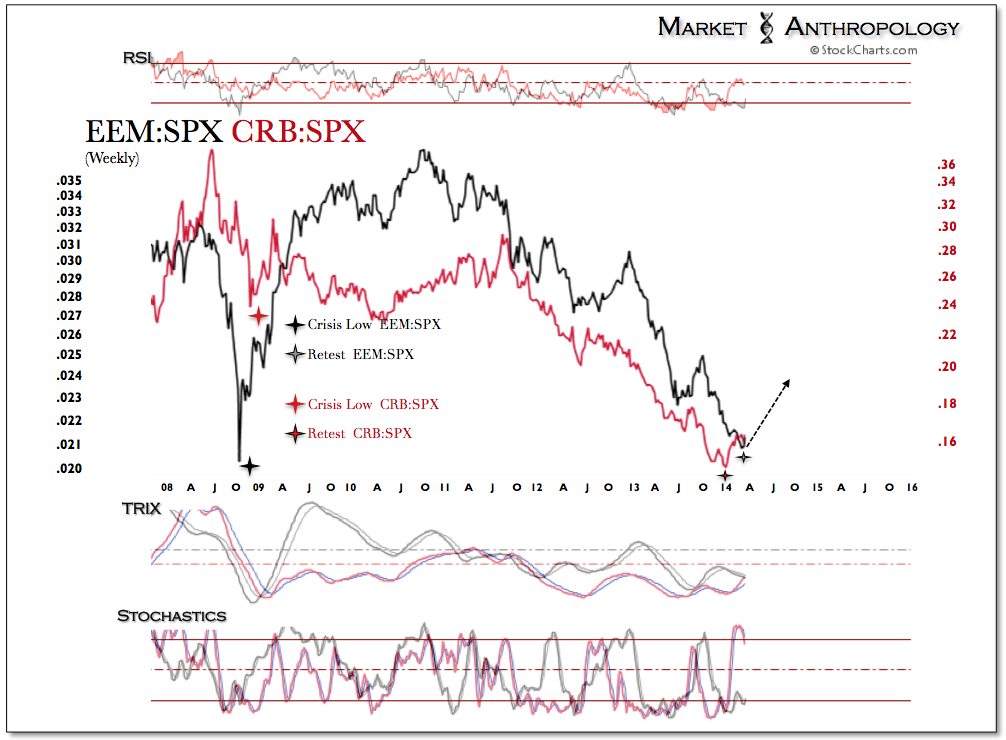 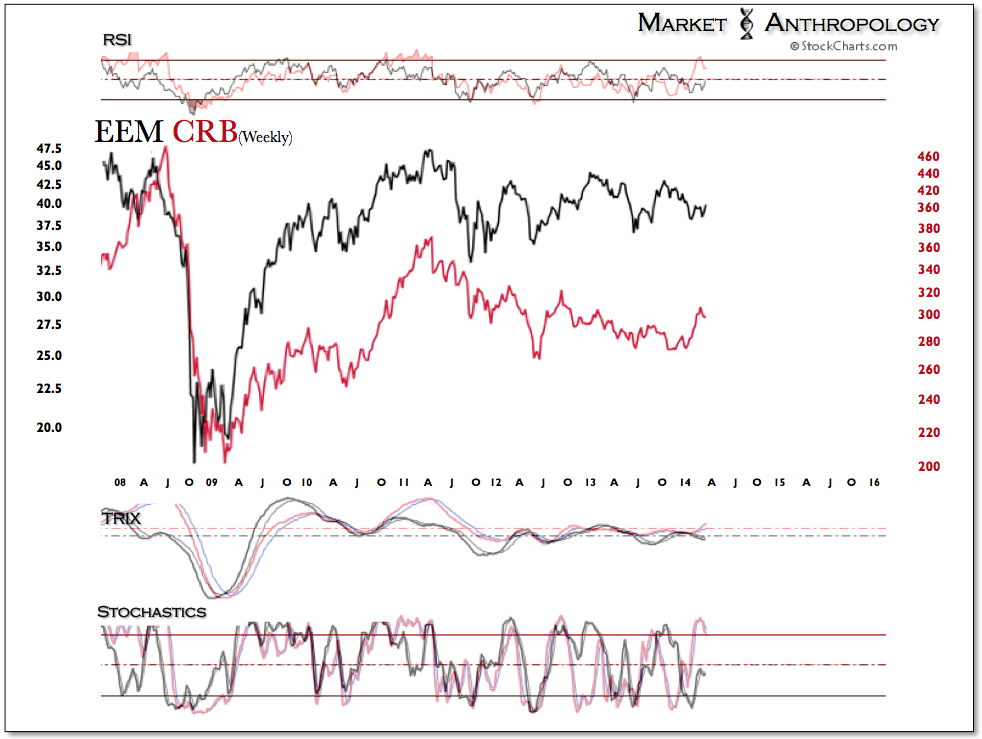