After describing the ratio comparison this weekend between the precious metals miners and the financials through the credit crisis, I thought I would run a performance study to see how the comparison held up. The study was defined by each of the respective ratio’s high in the cycle – with the end point in the financials as March 2009. I fit the current XAU:Gold comparative to the BKX:SPX study, based on the congruency of momentum – as expressed by the RSI & stochastic oscillators, as well as time. 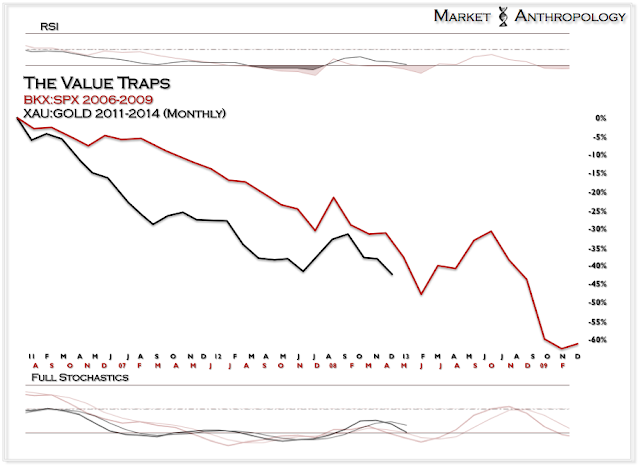 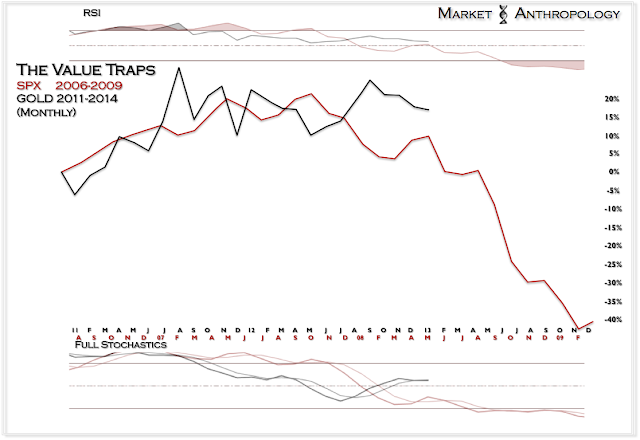 Certainly this is not an apples to apples comparison, but an expression of how a derivative sector capitulates – relative to its eroding and denominating backdrop. To add insult to those fundamental analysts who have been strongly marketing the idea of the miners, based on their valuations relative to gold – the simple truth is the market knows more than you. My best guess – just as the early weakness in the financials in 2007 alluded to the underlying credit crisis that was about to sink the economy and the SPX, the miners are alluding to a deflating tide in the precious metals sector. This of course could impression one to believe that despite the exuberant gains in the equity markets, the perception of breaking through the liquidity trap is still at best an illusion.
at 10:35 AM