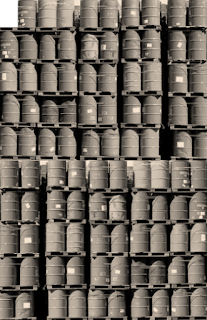 Light sweet crude (WTI) is currently trading ~$60/barrel, with an opportunity over the short-term to rise above overhead resistance.

Since breaking out in March after testing the lows from late January, oil has remained in a narrowing range over the past two months, with resistance and support coming in around $61 and $58, respectively.

As described in previous notes throughout the year (most recently – Here), we’ve followed the SPX:Oil ratio through a comparative prism with the two major exhaustion pivots (86′ and 99′) that define the asymmetrical structure of the ratio.

All things considered, we still believe the ratio has cyclically pivoted lower, with the current market expressing the closest similarities with the secular low achieved by oil in Q1 1999 and the subsequent rally that coincided as the Fed postured – then shifted towards tighter monetary policy.


Click to enlarge images
Congruent with the momentum signatures in late June 1999 (Figure 2), oil appears poised to roll momentum in the ratio lower if the market breaks overhead resistance above $61/barrel.

While the lags and offsets in correlation trends across markets are unique for each period, the yield profile with 1999 is congruent with the current market. This is primarily due to similar expectations of tighter monetary policy, which was first postured by the Fed in the first half of 1999 and administered with an initial rate hike at the end of June of that year.

Below is an update of the 1999 10-year yield comparative fitted to the markets respective pivots, which if indexed to the low and first rate hike in June 1999, would point towards a liftoff by the Fed around September of this year.

Although we’d speculate that “liftoff” likely overstates the ultimate reach of yields and the Fed this time around, we still expect long-term resistance in 10-year yields to be challenged later this year ~ 2.65%.

When it comes to gold, from a trend perspective there are structural and momentum similarities with 1999 as well – as both markets traded precariously through a shift in monetary policy.

The chart below was normalized to the seasonality of the 1999 yield comparative (Figure 5).

The question is, will gold offer up the same opportunity it provided going into the first rate hike in June 1999 – which ultimately became gold’s bear market secular low one month later.

Back then, support was initially broken in May as the Fed unveiled a new push towards greater transparency and announced a bias shift in policy for the first time ever in its communique to the markets.

The net effect was traders heavily sold gold in unison on misplaced fears that real yields were headed materially higher as the Fed shifted towards tighter monetary policy conditions.

While we expect the long-term outcome to remain the same – in that gold offers great relative value for investors today as global inflation has begun to rise and the reach of nominal yields will likely be modest; the market has humbled our own bullish leanings and remains susceptible to short-term expectations – as the market trades near its cycle lows and about to come through another historic policy transition.

That said, one significant difference we noted recently between 1999 and today – and which we suspect would more broadly support commodities and precious metals should it continue, is that the intermarket relationship between yields and the dollar is diametrically different today.

In 1999, yields led the turn tightly correlated with the dollar, as oil followed the pivot higher with a 10 week lag. Over the past year, long-term yields and the dollar have moved inverse to one another, with yields finding a low in late January and the US dollar index setting a high from its relative performance extreme 10 weeks later.

As such, the 1999 10-year yield/oil chart resembles the 10-year yield/euro chart today – which we believe would support a broader reflationary profile for commodities and downstream inflation expectations.

While it’s still in the markets near-view window, the US dollar index continues to loosely follow the breakdown pattern from its 1985 secular high. Should the index sustain the move from the relative performance extreme, a symmetrical retracement decline would unfurl across the balance of the year.